Party with a dinosaur and more Miami gossip 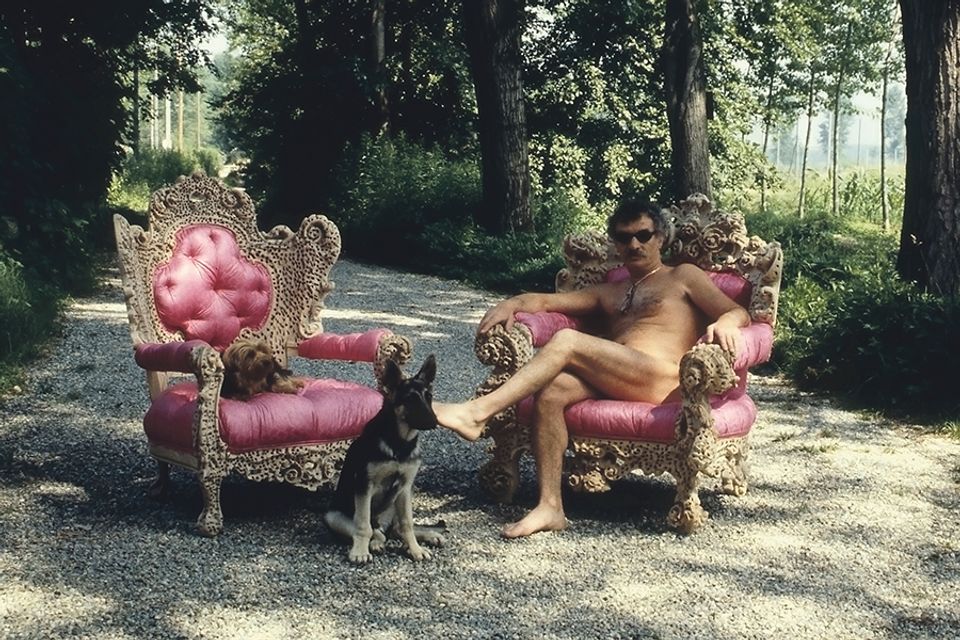 Watch for worms: Urano Palma relaxes on one of his Casanova chairs, with canine company Archivio Fabrizio Garghetti (1976-78)

Out of the woodwork

The cheekiest object at Design Miami must be a 1978 photo of the late Italian designer Urano Palma sitting stark naked on one of a pair of his Casanova chairs (1970-75), on show at the Erastudio Apartment-Gallery. Palma poses with two of his dogs—one occupying the other chair—who both look rather bemused. The chairs, also exhibited on the stand, are causing a stir in real life thanks to an unusual organic technique used to make the holes and pockmarks in their wooden frames. According to the design magazine Domus, Palma “drilled holes and inserted live woodworm to create a depthless feeling”. Let’s hope the worms had vanished before Palma planted his naked posterior on the seat. 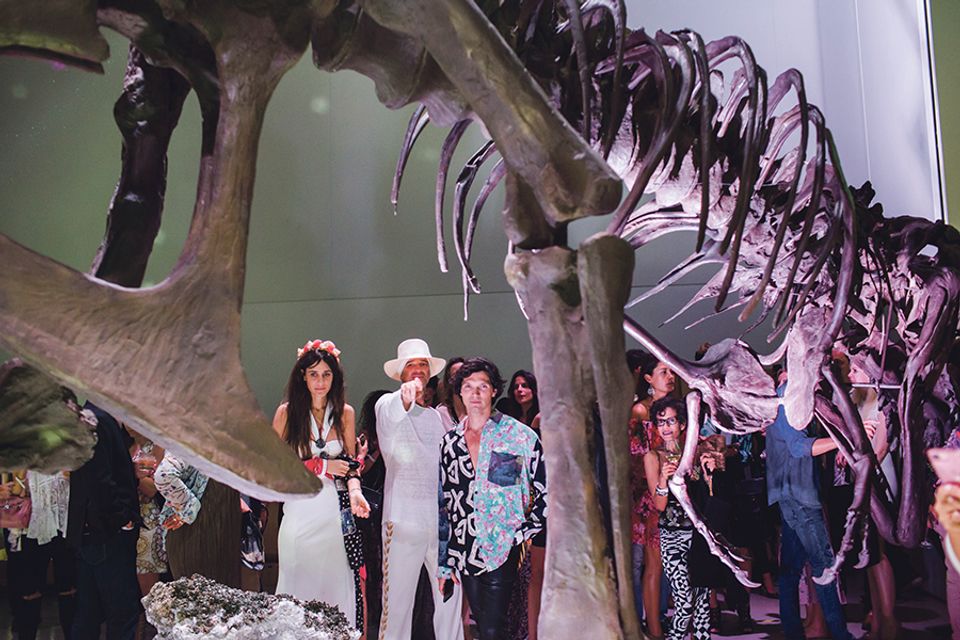 You're never too old to party at Faena

A special guest towered over the grand fiesta thrown at the Faena Forum by the hotelier Alan Faena on Monday to kick off Art Basel week. The pièce de résistance of a series of installations commissioned by the fun-loving Faena was a throbbing disco inferno, plastered with colourful floor and wall décor by the artist duo Assume Vivid Astro Focus and presided over by a monumental—and apparently real—skeleton of a Tyrannosaurus Rex. The looming prehistoric monster, on loan from a private collection and perched over huge chunks of sparkling crystal and amethyst, is meant to be a reminder of Earth’s treasures that will force us to stop wrecking the planet. Only in Miami…A spirited performance 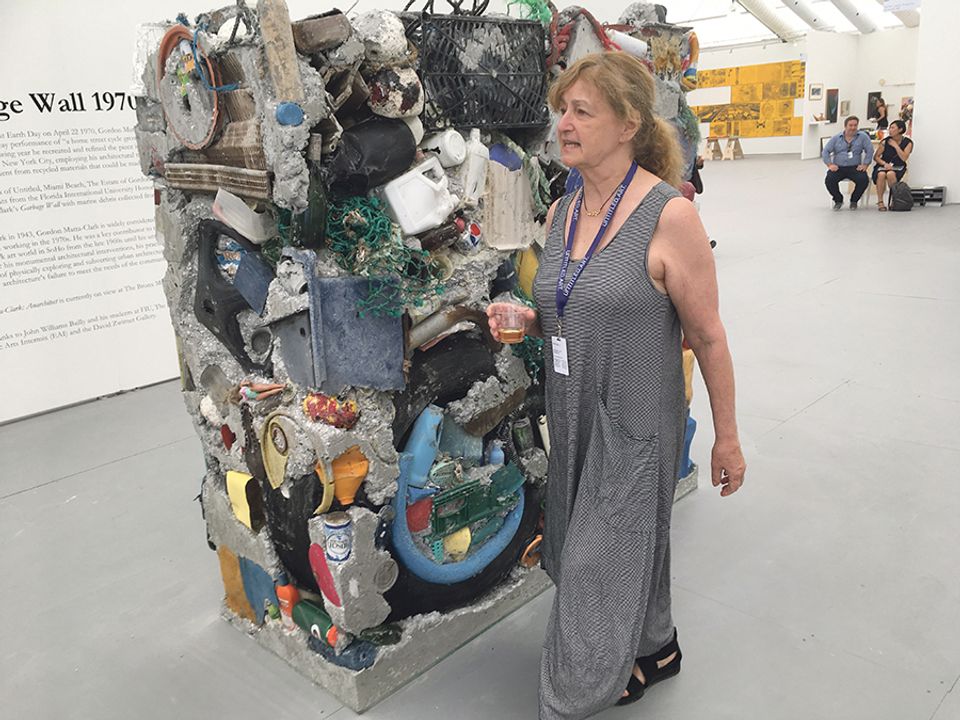 Fair-goers arriving at the opening of Untitled yesterday were stopped in their tracks by what appeared to be an extremely hostile reaction to Gordon Matta-Clark’s Garbage Wall, a piece originally created to mark the first Earth Day in 1970, and remade (in its 26th iteration) with Miami detritus as a special project at the fair. But the vandal, swigging from a glass of tequila and spraying the work with each mouthful as she circled the piece, was in fact the artist’s widow, Jane Crawford. She says that the ritual, which accompanies each incarnation of Garbage Wall, pays tribute to her late husband (whose drink of choice was tequila) and also appeases all the other spirits who have lived “in joy and sorrow, in love and despair”. 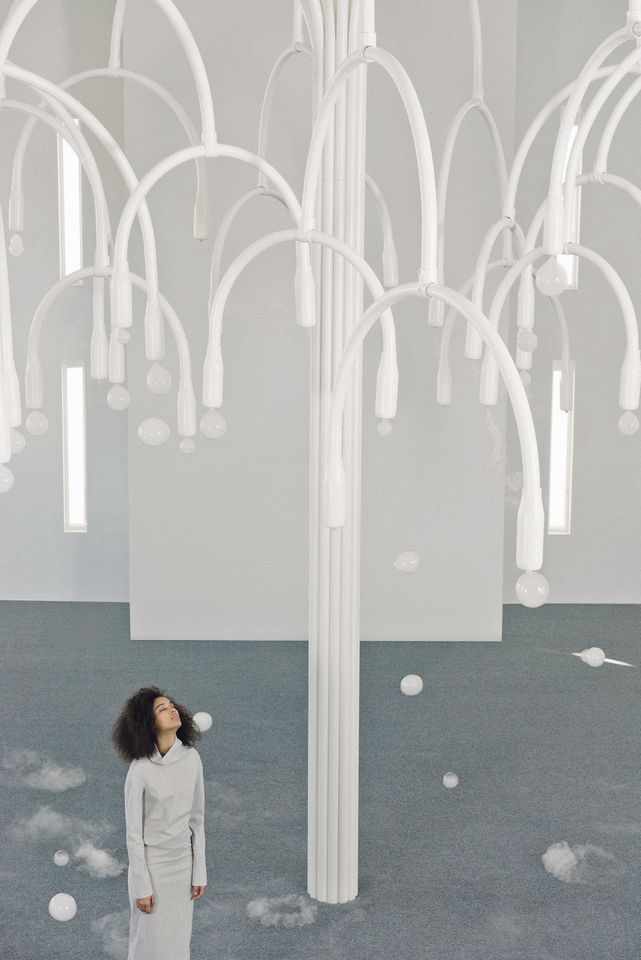 Jane Crawford with Garbage Wall by her late husband, Gordon Matta-Clark courtesy of COS

In an Art Deco residence on Euclid Avenue, just a few blocks from the Convention Center, the multisensory installation New Spring is soothing nerves wracked by the fair circuit. The work, made by the London-based artists Alexander Groves and Azusa Murakami, A.K.A. Studio Swine, in association with the clothing label Cos, gently drops giant iridescent scented bubbles from a sleek white metal tree. On contact with human skin, the bubbles pop to release one of four perfumes based on wood, fruit, green leaves and coconut, while specially composed ambient music fills the air. But the piece—“something uniquely playful that evokes the glamour of the Art Deco city by the sea”, according to the artists—can be a nightmare for art-loving Instagrammers trying to catch the bubbles before they pop.