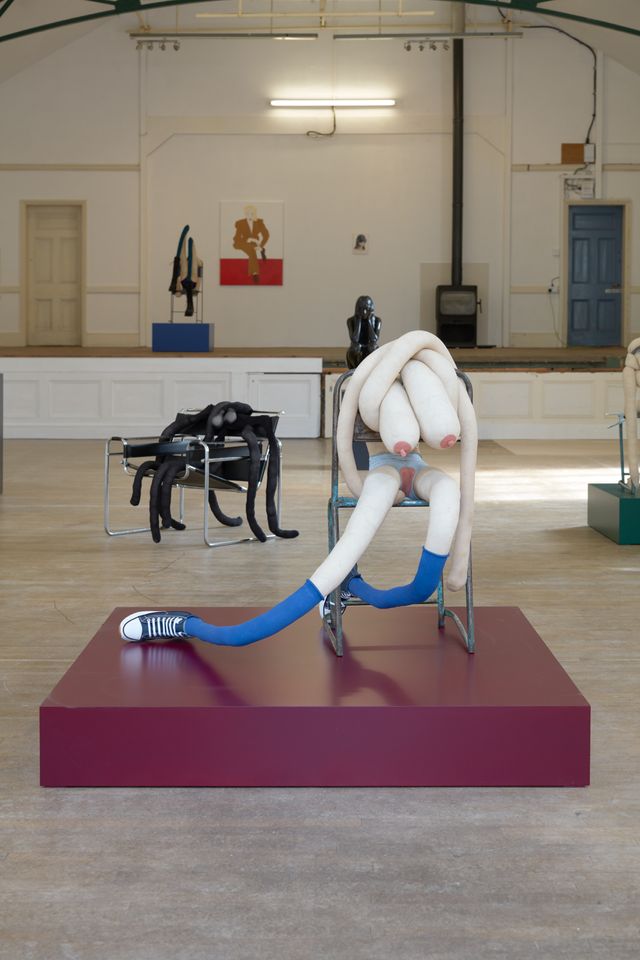 It seems a pretty basic premise: four friends exhibit their most recent lockdown work in a rural Suffolk market town, far from any madding art hubs. But Pop Goes the Pastoral in the Old Theatre in Framlingham is not only a chance to see striking new work by Sarah Lucas, Gary Hume, Don Brown and Kate Boxer in an unusual space, it is also a show whose sum is every bit as great as its parts; rich in nuance, complexity and multi-layered conversations.

The show's main instigator is Sarah Lucas, who describes it as a very “feminine” exhibition. Even though two out of its four artists are men it is an exhibition almost exclusively devoted to images of women (apart from Gary Hume’s two decidedly androgynous portraits of Emile Zola’s young son Jacques). Most immediately striking are five of Lucas’s new Bunnies sculptures, dramatically shod, amply-breasted and made from kapok-stuffed tights, which droop, splay and sprawl around battered metal chairs like languid teenagers. (One notable exception is a deeply disquieting eight-legged octopus-cum-arachnid, directly descended from the soft spider made by Lucas back when she and Tracey Emin ran their Bethnal Green shop in the early 1990s.) Lucas’s slouching expressive personnages form an immediate visual correspondence with another series of works by Gary Hume: large black charcoal and pastel images of swans, whose abstracted curvaceous necks are echoed in the loops and arabesques of the Bunnies' bendy limbs. 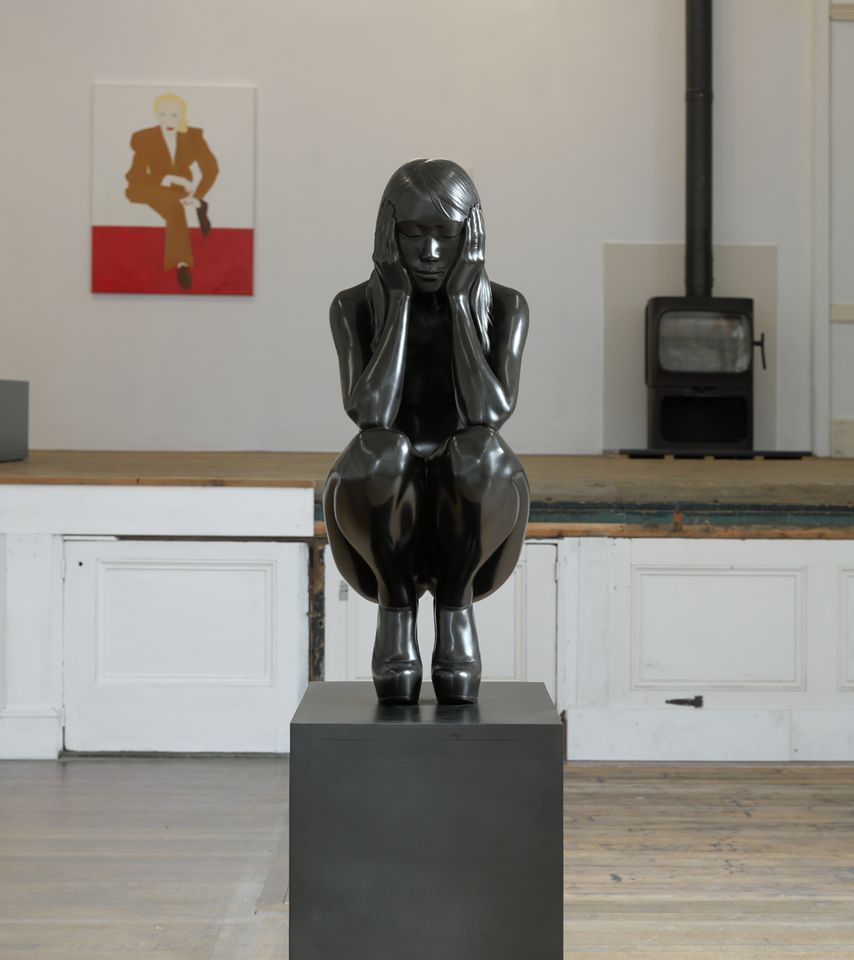 It is tricky territory for men to make images of women these days, but Don Brown has spent more than 20 years making meticulous, highly finished statues of his wife Yoko, and the tender intensity of her latest incarnation is both unsettling and compelling. Rendered half-life sized in black bronze with the pristine gleaming patina of basalt, she squats naked in spike heels, eyes closed and looking slightly pissed off (too many years as a muse?).

Two new bronze works of Brown’s (clothed) daughter Eriko, one in a lotus position and the other curled up sleeping, also use this most traditionally monumental and macho of materials to express both the fragility and the self-possessed, internally directed power of these contemporary women, each of whom are at very different stages of their lives. 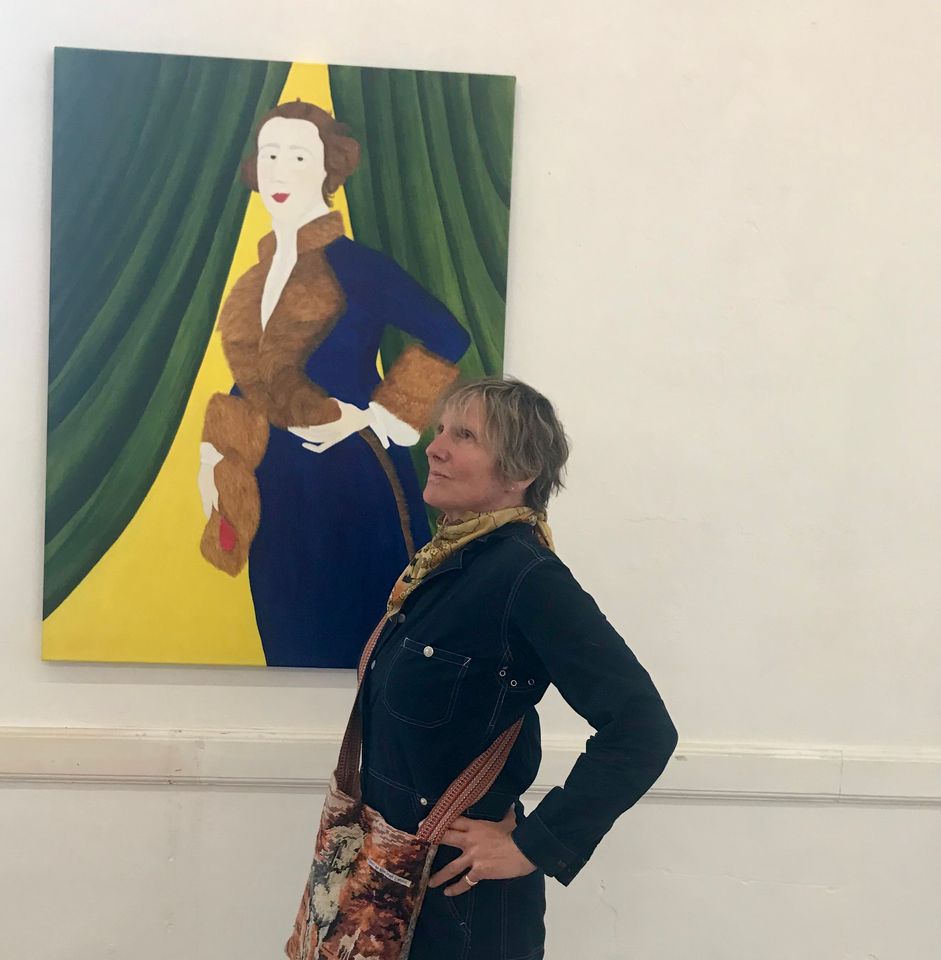 Brown’s votive, memorial-like sculptures—as well as his keenly observed small oil portraits of wife and daughter along with one painting of a particularly lovely strand of sweet peas—offer interludes of introspective quiet amid both Lucas’s exuberant Bunnies and Kate Boxer’s vivid, punchy paintings of great dames from all periods. Her swagger portrait of Peg Plunkett, Dublin’s most famous 18th-century brothel owner, presides over Lucas’s lounging ladies as if they were part of her stable (I found great serendipitous satisfaction in the flash of red lining of Madame Plunkett’s fur tippet finding its identical counterpart in the scarlet splayed gusset of a nearby Bunny…) Boxer’s mannishly besuited Marlene Dietrich surveys the proceedings from up behind the Old Theatre’s raised stage, while Punk siren Poly Styrene of X-Ray Spex cavorts in lurex across the room from the beehive-coiffed Motown legend Mary Wells.

Such a vivacious gathering of multifarious female portrayals once again animates Framlingham’s long-quiet theatre with poses being struck and stories told. Pop Goes the Pastoral is testament to the power of relationships artistic, intergenerational, conceptual, formal and personal. And to the potency of the shoe as a signifier. From Marlene’s brogues to Poly Styrene’s red stilettos, from Yoko’s vertiginous spike heels to the Bunny’s many permutations of Converse footwear, never in all my years as an art hack have I attended such a well-heeled show.

• Pop Goes the Pastoral, The Old Theatre Framlingham, until 2 October