Reporting on food and figures at Annely Juda, Waddington Custot and Soft Opening 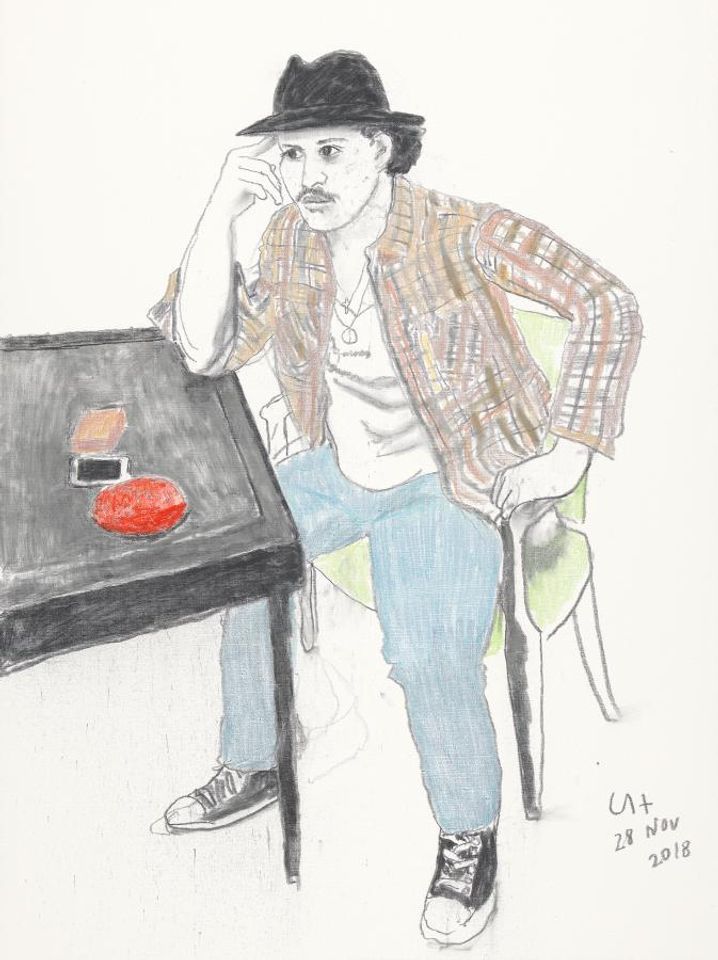 Video Brings Its Time to You, You Bring Your Time to Paintings and Drawings, Annely Juda (until 14 April)

David Hockney exhibitions in London are well past their saturation point. But judging by the intense buzz that surrounded this show of his recent works at Annely Juda, public appetite for Britain's most expensive living artist shows no signs of ceasing. To accompany, the gallery served an approachable, citrusy 2018 Chenin/Sauvignon blend—although something with floral notes would have paired better with the two vivid and expansive videos of woodland landscapes shot in Hockney’s native Yorkshire. Bucolics aside, it was the 18 eagerly anticipated large canvas portraits of A-list celebrities and Hockney's friends and family that commanded the most attention. Those with long-standing personal relationships to Hockney, such as the late art-historian John Richardson, had the tenderest of details lovingly eked out by the master draughtsman. Starrier names however fared worse, most notably a barely recognisable portrait of the musician Bruno Mars, sorely lacking in Finesse.

Not to squander this prime photo opportunity, some of the sitters showed up to pose by their pictures, including the public relations heavyweight Erica Bolton and the writer Jonathan Brown, who wore the same crumpled peach-coloured blazer and cow-hide boots as captured by Hockney. All portraits are priced at £1.2m and, according to the gallery’s associate director Nina Fellman, were each initially offered to the respective sitters for purchase. None, however, have so far taken up this opportunity. With sitters including Benedikt Taschen Jr., the hefty price tag might not even be a significant deterrent. Perhaps some are simply hoping for their likeness to be bought by an institution. Bruno Mars in the Broad Museum? Here’s hoping. 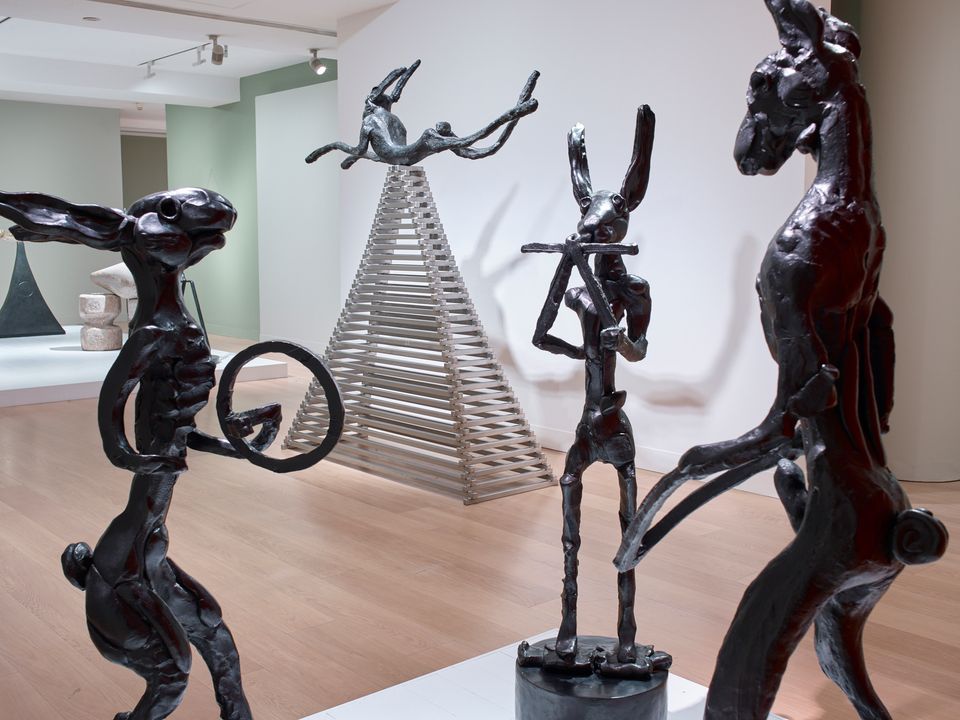 A hare-raising sound rang through the opening of Barry Flanagan's trademark leporine sculptures at Waddington Custot after a fire alarm forced guests to vacate the premises and spill out onto Cork Street. The alarm—apparently set off by the sushi party being prepared downstairs—necessitated a visit from London's finest fire marshals, who eventually gave the all clear, allowing the crowd to re-enter and enjoy an menu of live-rolled sea bass and okra nigiri, alongside baskets of scallop sashimi served by a kimono-clad waitress. (The connection between the Welsh sculptor and Japan, as well as what part of assembling raw fish and rice creates that much smoke both remain mysteries).

Upstairs, Flanagan’s anthropomorphic hares captured in dramatic dark bronze mischievously capered, congregated in pairs, or were caught mid-leap. Prices range from £4,000 up to £1m for Large Monument (1996), a two-meter-high sculpture which depicts a trio of grooving bunnies above another, sat pensively below. Many of the works were shown at Flanagan's recent retrospective at Ikon Gallery in Birmingham and all come from the latter end of his career, when the formerly conceptual artist —once associated with the Land art and Minimalism movements—moved over to this fluffy form of figuration. So far, none of the works have hopped off their plinths into the laps of buyers. But judging by strong sales reported by the gallery on the first day of Tefaf Maastricht, these hares might still find caring homes. 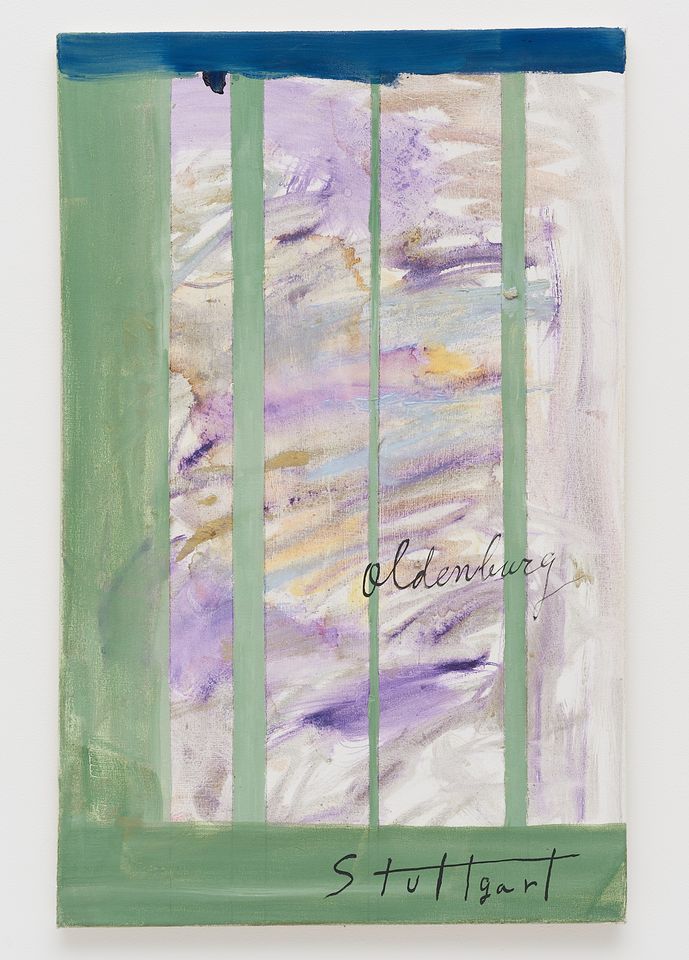 PSA—For this month only you can smoke inside Soft Opening without fear of stern reproach from the gallery's staff. This is all thanks to the Japanese artist Tam Ochiai, who has invited visitors to avail of his work a tangled tale (2017), which consists of two vintage ashtrays affixed to a piece of plastic on wood and joins a series of other recent assemblage works laid out on the floor. Consisting of found objects from around New York, they were inspired by a gift Méret Oppenheimer once offered to Max Ernst, which was lost for 40 years and then rediscovered in a Paris flea market. But the whimsy of this anecdotal backstory belies some of the darker concerns present in Ochiai's practice, which also focuses on themes of movement and its relation to mortality. A 2018 painting marked with the names of two German cities: “Oldenburg” and “Stuttgart”, where its subject was respectively born and eventually buried, is what Ochiai terms the “the ultimate life portrait”, its completion reliant on death.

According to the gallery's director Antonia Marsh, she was introduced to the artist following a 2017 show of his assemblage works in Nikko, Japan, which he based on the dying wish of the Polish-born composer Chopin, who requested that his heart be exhumed from his corpse in Paris and transported to Warsaw. This macabre sentiment surfaced later at a gallery dinner held at Bistrotheque where—in between coupes of champagne and spoonfuls of (fittingly) smoked toffee pudding—the conversation inevitably landed on coronavirus. With Covid-19 halting international fairs and exhibitions en-masse, the art world's inveterate itinerancy is also undergoing serious scrutiny, as the necessity of jet-setting to network and meet sales quotas is contextualised by a global health crisis. Indeed, what Ochiai asks us to consider in his work—where one's heart (real and metaphorical) truly belongs—seems all the more pertinent in light of a widespread travel ban. Staying at home might be bad for the art trade, but if the worst-case scenario should occur, surely far better to be buried in a cherished place than at an art fair—entombed with a bottle of Ruinart in one hand and Purell in the other. After all, who in their right mind would want “Messeplatz” written on their Ochiai life portrait?