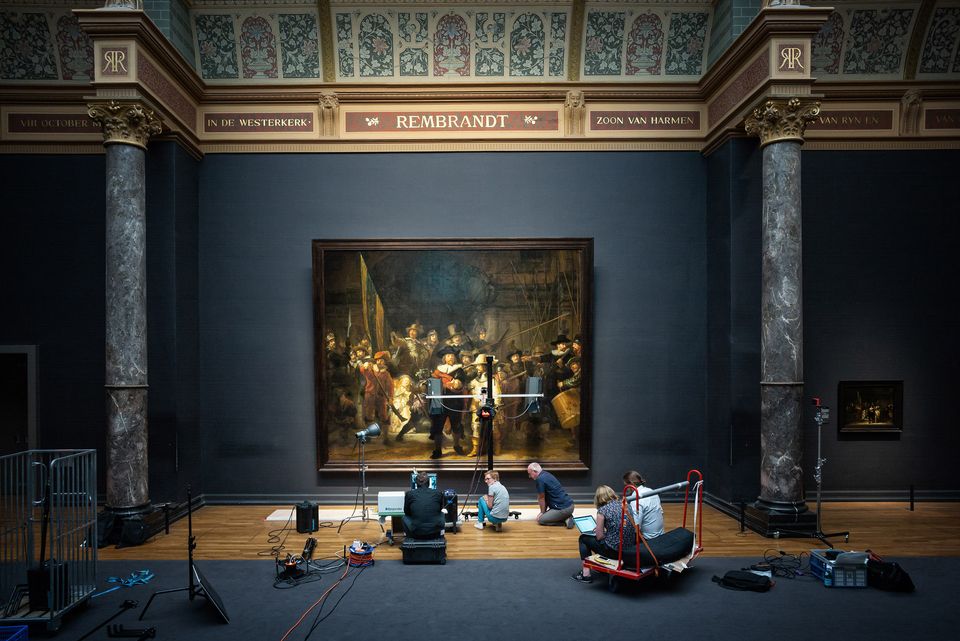 Preliminary research on The Night Watch at the Rijksmuseum in Amsterdam Photo: Daniel Maissan

I was invited to one of the art world’s holy of holies this month: the National Gallery’s conservation studio in London. I went to see their new acquisition, a self-portrait by Artemisia Gentileschi. Painted in Florence in around 1615, it shows the artist in the guise of St Catherine of Alexandria, who was martyred for refusing to marry a Roman emperor. It is perhaps a moving reference to Gentileschi’s rape in Rome in 1611. I saw the painting prior to retouching and can report that despite being cut down at the top and sides, it is in good overall condition. The visible losses seemed to reflect the vulnerability of the sitter.

The picture’s restoration has been documented in an excellent series of videos, available online. The decision to make the restoration public reflects a growing trend in the museum world. Until recently, it wasn’t always deemed appropriate for the public to see damaged, old masterpieces stripped of all repairs and in their most naked state. But museums have discovered that their visitors are fascinated by the material history of paintings and accept that objects centuries old will have acquired the stamps and scratches of time.

And now the Rijksmuseum has decided to make its restoration of Rembrandt’s The Night Watch (1642) an all-public event. You can even go and watch it all happen behind a specially built glass box. At some point, when all the old damage is removed, the painting may be more Fright Watch than Night Watch. But as the Rijksmuseum’s director, Taco Dibbits, points out, it’s the public’s painting, and the public have the right to know everything about it.

In the spirit of conservation transparency, let me tell you what just happened to my portrait of a man by John Michael Wright (around 1670). A combination of our long, cold winter in Scotland followed by an unusually dry, hot summer caused the stretcher to move and open up two small tears in the unlined canvas. Not a disaster: the picture would have to be sent to London and relined. I carefully covered the front of the painting in facing paper (sent by my conservator) and brushed on a warm gelatin-and-water solution to bind the paper to the canvas. The procedure worked perfectly. And as I stood back to admire my handiwork, up jumped our cat, landing forcefully in the centre of the painting with a crunch. Disaster.

The BBC has commissioned a fourth series of Britain’s Lost Masterpieces, which I co-present with Emma Dabiri. Happily, we have found a number of institutions to work with, to whom we are very grateful. But alas, one of them will not be the V&A. After researching an anonymous but rare English religious painting currently on display in the V&A’s British galleries, I found a slew of evidence to link it plausibly to a Flemish artist at work in England in the 1580s, Marcus Gheeraerts the Elder. It would be one of only a few works attributable to him.

I wrote excitedly to a V&A paintings curator to ask if I could meet to discuss the series, and the Gheeraerts evidence. But the response soon made it clear they weren’t interested in participating in the programme. Disappointingly, they didn’t even ask for any further information about the attribution. Now, it’s true that we have had other rebuffs from museums over the past three series of Britain’s Lost Masterpieces, usually when institutions have simply been too busy to accommodate a film crew. Naturally, being the museum world, the appropriate jargon had to be deployed, so we’ve become familiar with talk of “capacity issues” (or even, suspiciously, “genuine capacity issues”). But thanks to the V&A we now have a new one: “not a research priority”. I think it translates as “can’t be bothered”.