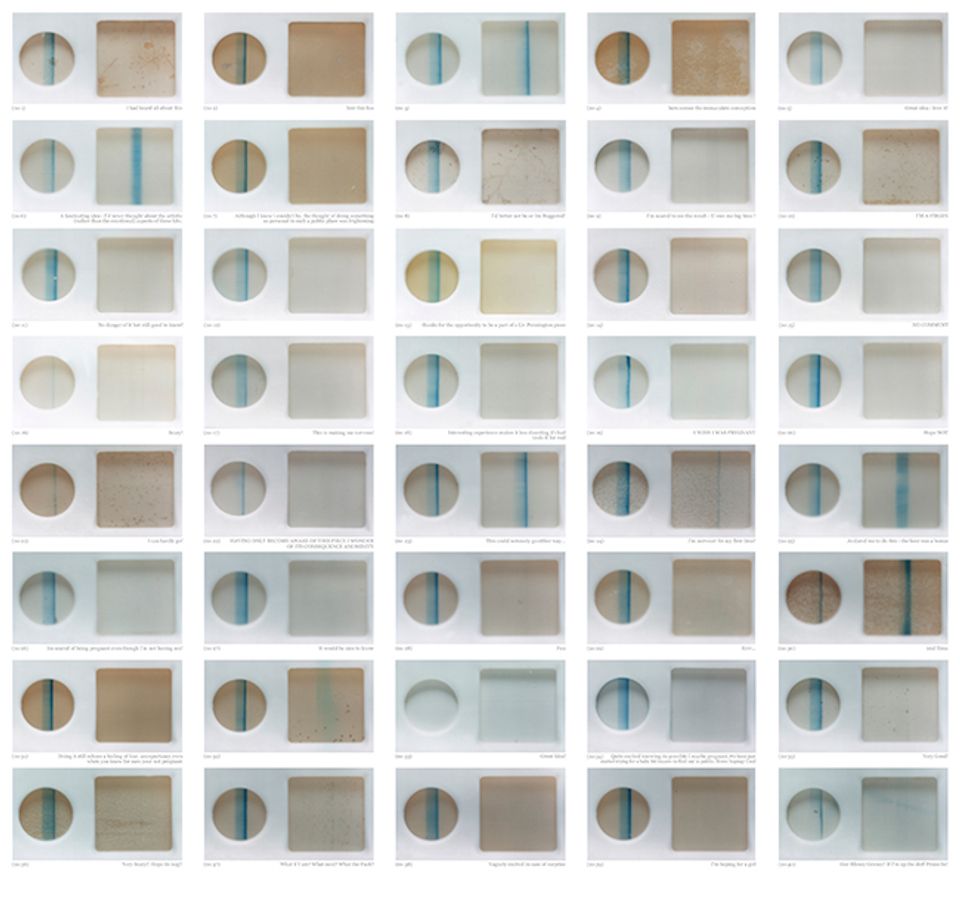 A word of warning to those planning on quaffing several glasses of champagne at tonight's private view of Matresence at Richard Saltoun gallery. Queues for the loo will be extra long due to a performance work by Liv Pennington, in which 40 volunteers will be asked to go to the gallery's toilets and pee on a pregnancy test. After being handed back into Pennington's (hopefully gloved) hands, their results will be anonymously displayed in real time via a projection against the gallery's bar.

"Private views always tend to be far more about socialising and drinking than the art. I wanted this piece to grab people's attention when they realise what's being shown on screen," says Pennington. This is not the first time she has staged this performance. Private View (2006-ongoing) had its debut 13 years ago at Pennington's MA show at the Royal College of Art and has been performed at numerous parties since, from the opening of an opera house in Norway, to a nightclub in Poitiers, France.

Although the results are projected anonymously, volunteers are allowed to ask the verdict of their individual tests. "Most people whose tests come back positive either know they're pregnant or at least suspect it. A few times, however, it has come as a complete surprise," Pennington says. While there is no prescribed way to find out if you are pregnant, making the discovery in an art gallery is surely a novel one. It does, of course, have the added benefit of allowing your offspring's first moments of existence to be broadcast to the Mayfair gallery set: a real pre-baptism of fire that will no doubt increase their cultural capital tenfold.

Technology has changed since the first incarnation of the performance and Pennington says she has to now use cheap pregnancy tests. This is because many premium brands today offer results in 60 seconds—not long enough for the test to be handed back and have its results displayed in real time.

Accompanying the performance will be the original photographs of the 2006 tests, along with the recorded responses from the participants. These have been put together to make a print with the ubiquitous circle, square and thin blue lines of the standard home pregnancy kit arranged in a grid formation.

It remains unknown whether Richard Saltoun will also be offering paternity tests in a corresponding performance piece.

Matrescence is a two-part group show bringing together 11 artists to explore maternal experience (until 21 December).