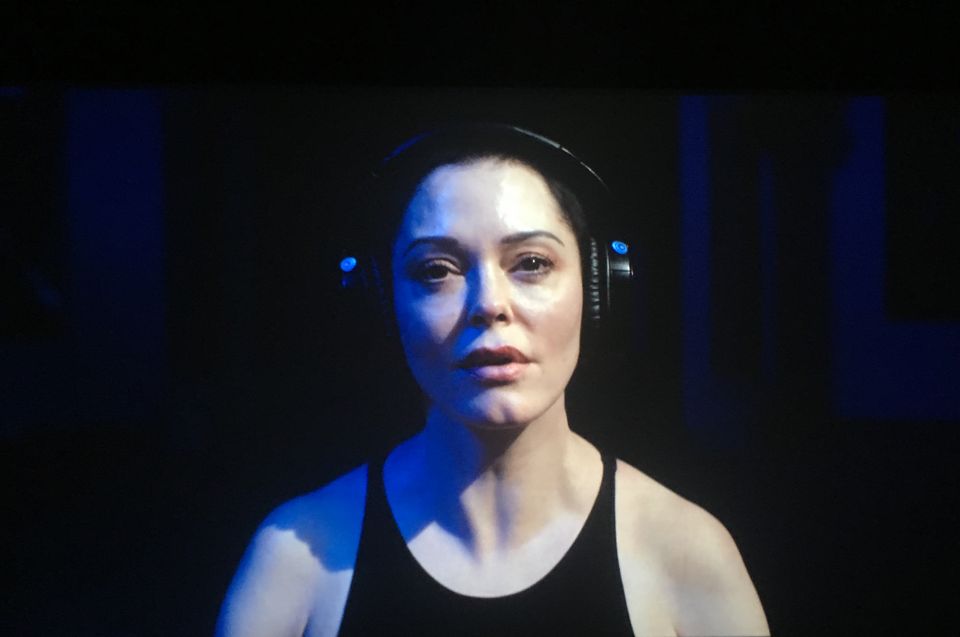 The actress and #metoo activist Rose McGowan’s first official foray into the art world was never going to be a coy watercolour. Indecision IV, commissioned and mounted by Heist Gallery and directed by Tonia Arapovic, is a dramatic film and sound installation in which McGowan responds to the movements of dancer James Mulford. McGowan is wearing earphones which feed her amplified versions of every surrounding noise – including her own breathing and the scraping of Mulford’s special sandpaper-soled-shoes as he performs a dance choreographed by Chudi Okoye. The same ambient yet also intimate soundtrack is experienced by each visitor through individual headsets.

The nine-minute film was shot in May 2018 as one continuous take in a 19th century former Welsh Chapel in Shaftesbury Avenue that is now an art performance space. McGowan had just come back from America a day before shooting, Harvey Weinstein had been arrested the day before. She had never met Mulford prior to the shoot and her reactions to their encounter were completely improvised. This unpredictable spontaneity lends the piece a tension that makes for compelling viewing.

Mulford, wearing only black leggings and his customised dance shoes, energetically strikes contorted poses while McGowan, clad in a black vest, leather trousers and work boots, is often motionless and remains seated for much of the piece. When she does move McGowans’s gestures are restrained and precise which makes it all the more dramatic when she gets to her feet or interjects with an unexpected snap of fingers or sharp clap of hands. It’s a tense, taut performance where a great deal of action takes place across her face which flickers with myriad emotions that never quite erupt – (after filming, she admits that “I went into the bathroom and cried.”) McGowan describes collaborating on Indecision IV as “a very moving experience…it gave me a space to work through emotions during a tumultuous time,” however she hadn’t seen the finished piece until just before its first public airing at last week’s premiere on 11 December. Here, amidst the distraction of strobe-lights, pounding music, flashing paparazzi, and lashings of dry ice (even on the smoking ceviche canapés) McGowan – who was present with her partner the gender-fluid model Rain Dove – professed to be heartily pleased with the outcome, describing it as “a beautifully taut piece that taught me a lot about grace.”

She may not have viewed the work until late in the day, but it was McGowan’s personal choice that the proceeds of the public screenings last Saturday and Sunday (16 and 17 December) at the Institute of Light go to Refuge, a charity that provides support for survivors of domestic violence and violence against women. There are now plans afoot to take the work to the Venice Biennale in May, let’s hope they are realised.