The rude genius of Sarah Lucas at the New Museum 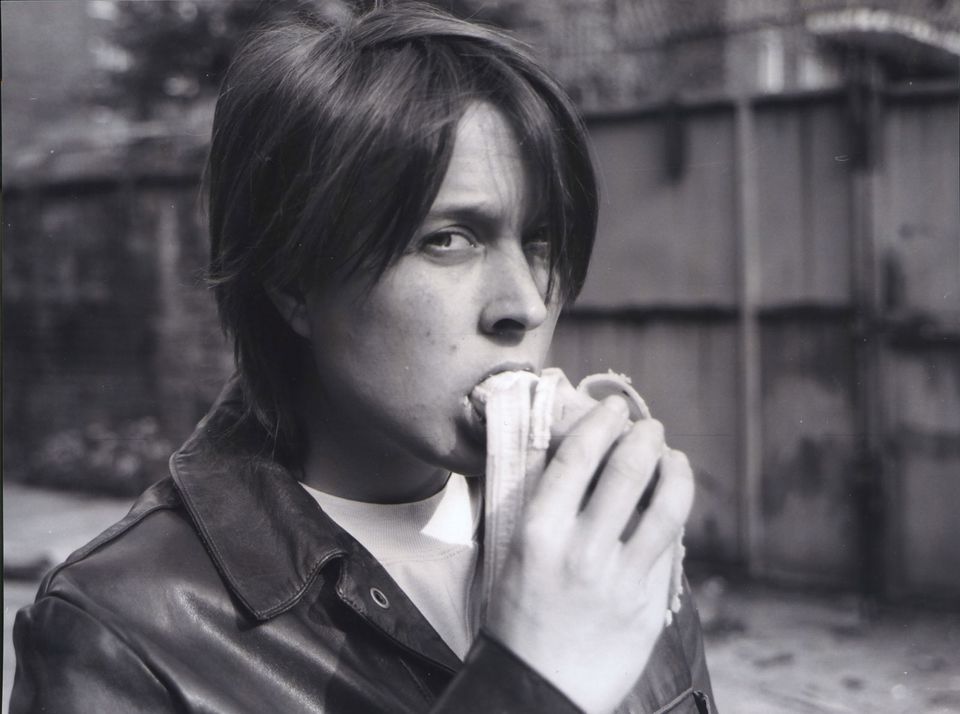 What are the odds? That Sarah Lucas: Au Naturel should open at the New Museum in the week when the regressive Brett Kavanaugh confronts the woman accusing him of sexual assault, and on the very day that Bill Cosby is sent to prison for even worse behaviour? It feels like kismet.

“We hope jaws will drop,” said Lisa Phillips, the museum’s director, acknowledging the exhibition’s fortuitous timing. No doubt jaws will, most likely to emit rueful laughter or grateful sighs as well as startled gasps.

Au Naturel is satisfying at every turn. It’s tough. It’s hilarious. It’s beautifully done. And it’s absolutely true to its maker, a proud spitfire—a “rude girl” sensitive to her working-class background and eager to stick it to any mofo who shows her gender disrespect, be it in the workplace, at home or in the tabloids.

From the start of her career in the early 1990s, when she was aligned with the Young British Artists—fellow Goldsmiths graduates like Damien Hirst, Fiona Rae and Gary Hume—Lucas has made art that playfully, and deliberately, countered male depictions of the female body, then went on to pierce the priapic consciousness of so much that came before her. (The show is replete with references to Dada, Surrealism and Minimalism too.) She’s an artist who can evoke sexual relations in witty, scabrous sculptures that simultaneously comment on class and consumerism while paying heed to formal considerations as well.

As curated by the New Museum’s artistic director, Massimiliano Gioni, and his associate, Margot Norton, the show—Lucas’s first in an American institution—unfolds across three floors in displays of sculpture, photography, photographic wallpaper and video that adhere to their original configurations in galleries or in international shows like the Venice Biennale, bringing the work as a whole into sharp focus. 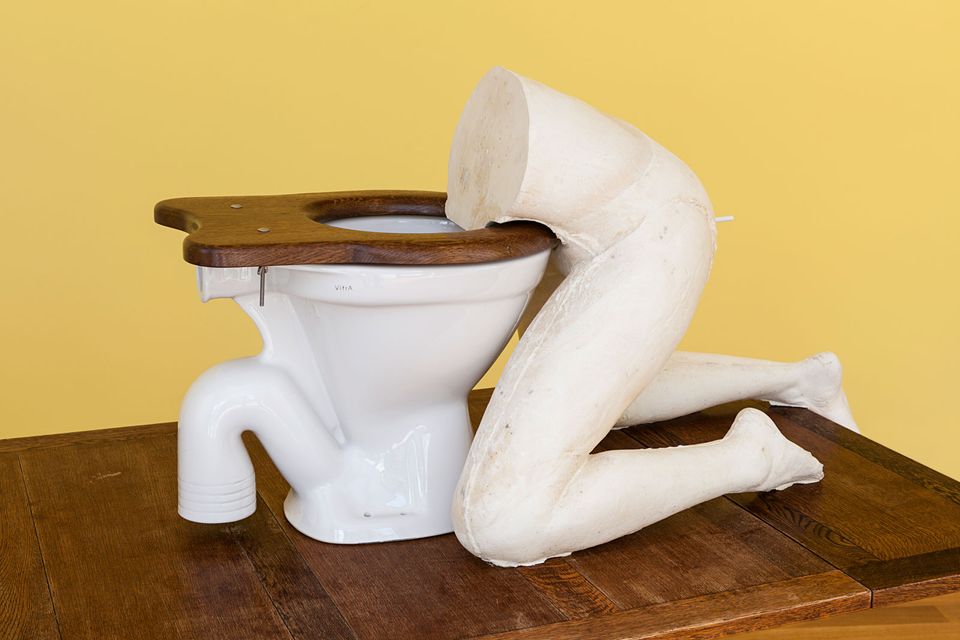 Lucas represented Great Britain at the Venice Biennale’s 2015 edition, and has recreated part of that exhibition here—plaster casts of friends’ lower body parts positioned in provocative poses on found tables, chairs, toilets and more. “That’s me,” said the chef and restaurateur Margot Henderson, blushing but proud. “Can you believe Sarah threw me over a deep freezer?”

From the minute I first saw Two Fried Eggs and a Kebab (1992, a battered table supporting a sexually suggestive arrangement of said ingredients with a photo of same), in the era-defining Sensation! show along with the title piece Au Naturel (1994, an old mattress where melons, a cucumber and a bucket conjure human coupling), I thought Lucas was brilliant—a smarter, cooler, tougher little sister taunting the boys’ club of post-minimalist conceptualism. In self-portrait photographs, she gave witty shade to tropes of male bravado, but did so in a completely disarming way.

At the opening, I found the artist standing before the concrete sculpture she made for the museum’s lobby, an immense pair of clearly female legs in thigh-high, platform boots that is something of a streetwalker’s Colossus of Rhodes. “This is the biggest show I’ve ever done—epic!” the artist told me, less as a statement of fact than an expression of excitement. The viewing public, particularly the portion harbouring XX chromosomes, is likely to share it. (At the opening, male viewers bore a certain sheepishness as well as clear admiration.) 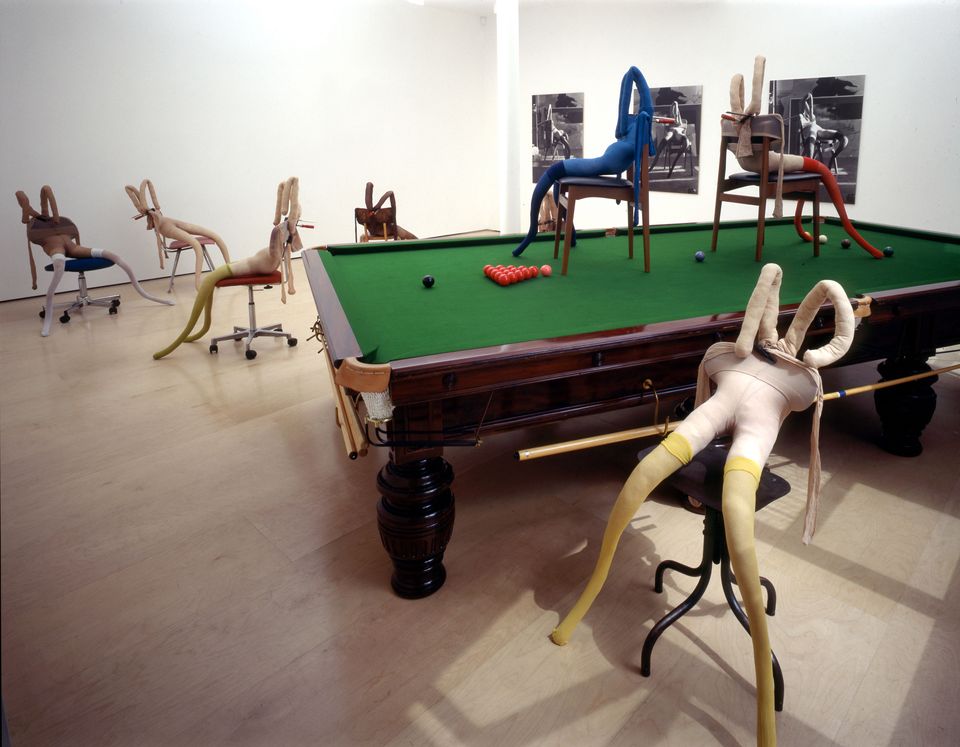 Her “bunnies”—headless, female forms made of stuffed pantyhose and slouching either from exhaustion, abuse or boredom on brightly painted secretaries’ chairs—are practically a signature by now, and a warning to all who believe that testosterone is a gift from God benefiting men alone. 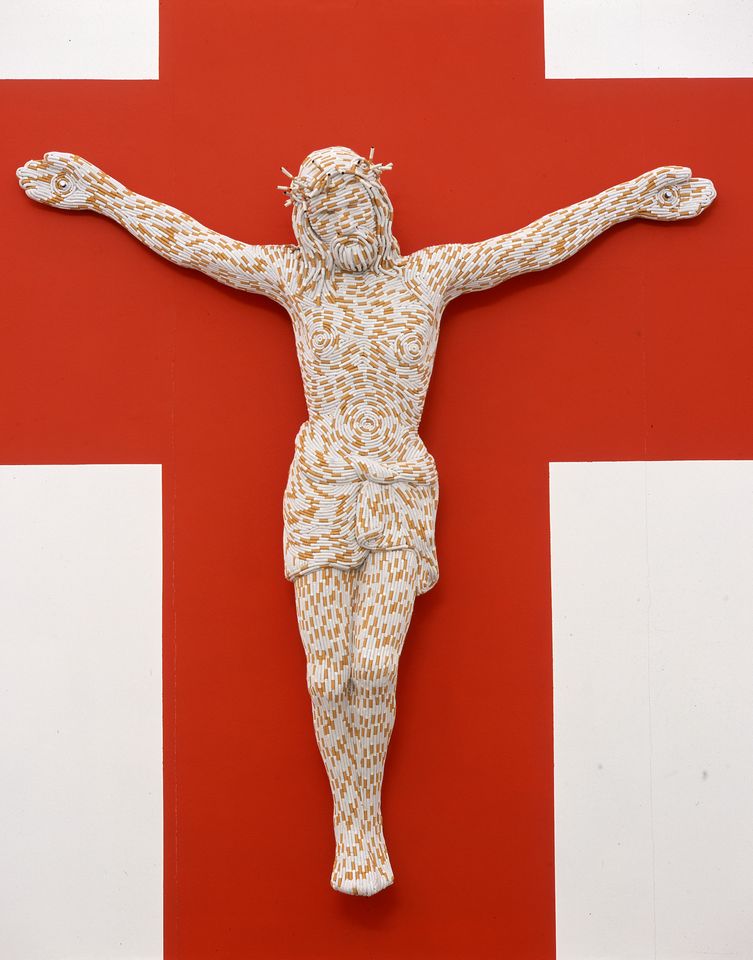 For all her scrappy, found-in-the-street materials—battered toilet bowls and furniture, old mattresses and mattress springs, rubber chickens, stuffed pantyhose, evocative foodstuffs, crushed cars—as a whole, the show conveys an unmistakable sense of majesty that I found almost breathtaking. That was especially true on the top floor, where, in a sendup of manliness, a giant self-portrait of a spread-legged Lucas oversees looming plaster phalluses and crushed, burned or sliced Jaguars and a crucifixion completely covered, end-to-end, with 50 cases worth of unsmoked cigarettes. “I like a hermaphroditic situation,” Lucas joked.

Personally, I like a situation that puts Lucas forward as brilliant.