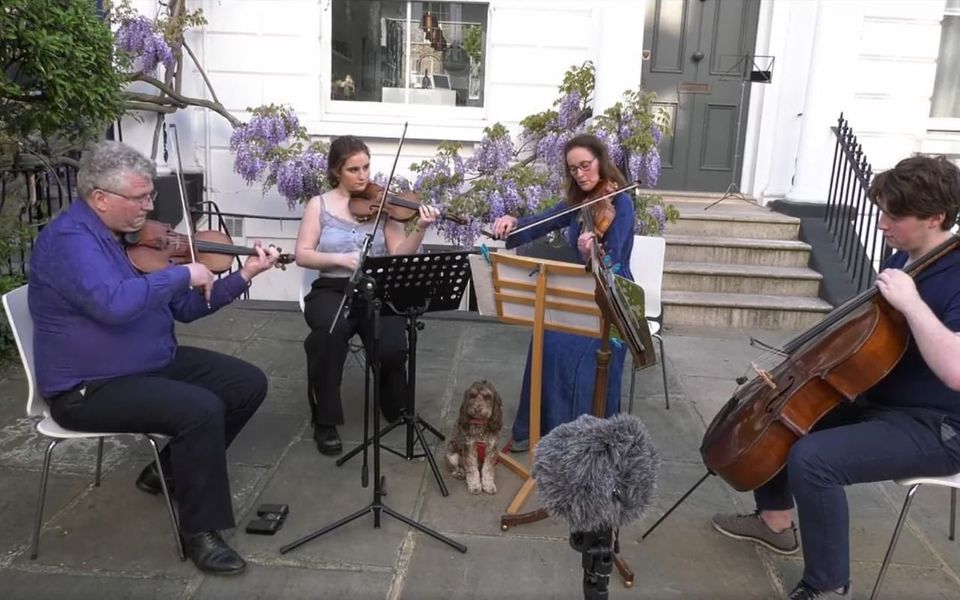 Helena Newman and family have been stopped by police from playing concerts to their neighbours. The dog is not thought to have been involved © Rafael Todes

Helena Newman is not exactly the type you'd expect to have a run in with the police.

But, the Sotheby's Europe chairwoman and auctioneer, known for her polished, head girl-like manner, has been stopped from playing concerts with her family's string quartet to neighbours in the front garden of their West London home.

Newman, a viola player, and her violinist husband Rafael Todes, who teaches at the Royal Academy of Music and is a member of the Allegri String Quartet, and their two children (Max, on the cello, and Isabella, second violin) had been playing concerts outside their house in Bayswater since lockdown began last month. The family started doing the Sunday concerts to entertain their neighbours and raise money for St Johns Hospice in London (you can still donate here) and had been streaming them online.

But alas, on Sunday, two Metropolitan Police officers arrived as they were playing and, once they were finished, told them they could not hold any more concerts as they were encouraging neighbours to break the lockdown and gather to watch in the street.

On Todes's livestream video, one of the officers reluctantly says: “Look, I see what you’re doing and I’m fine with it, but with so many gathering outside it’s just...I don’t enjoy this part of the job, but obviously it’s going to keep causing the street to keep gathering." Apologising for having to shut it down, he added that he would not fine the family and that the music was "lovely".

Todes told the Telegraph: “About five weeks ago a neighbour asked us during lockdown whether we could do a little concert for the lady who lived upstairs. So we did that and people in the street watched and somebody said 'you've got to do this again next week'."

Todes added that there was a certain irony to the event: “Just before we played, I gave a little speech about Shostakovich and how he was out of favour when he wrote this and he was terrified that he was going to be arrested by Stalin’s people." The concerts were, he said, “quintessentially harmless” and “people were socially distancing very carefully”.