Suffragette cities: UK women take to the streets to mark 100 years of the vote 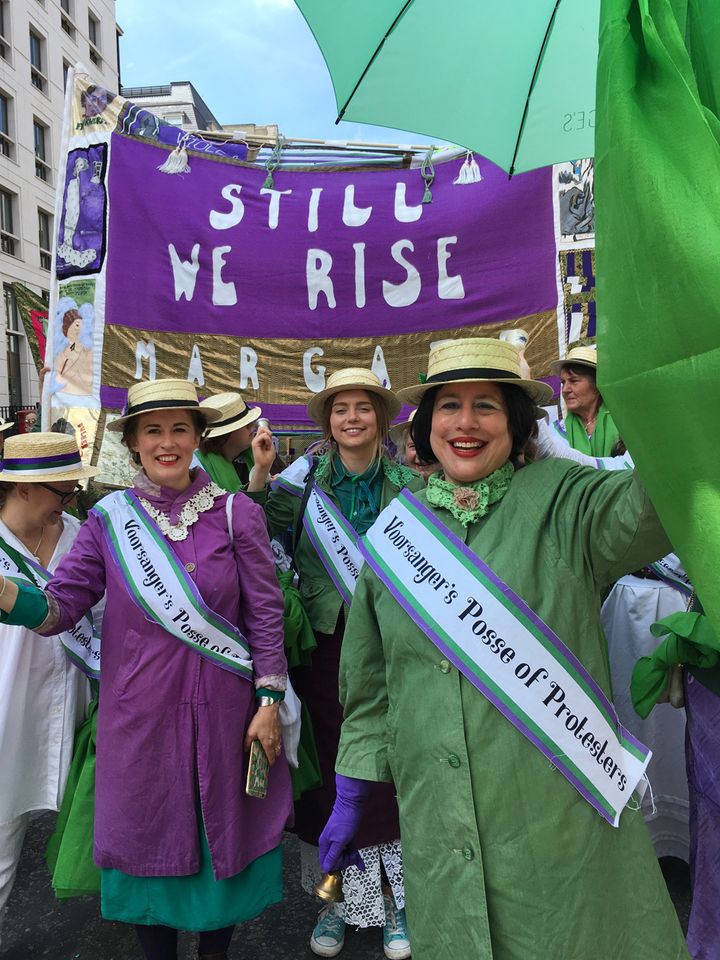 The artist Jessica Voorsanger (right) and her posse, resplendent in the colours of the suffragettes Louisa Buck

Many art-worlders were off to Art Basel on Sunday (10 June) but some of us remained back home to join the thousands of women—and some men—who marched through the streets of the UK’s capitals to mark a century since the first British women won the vote. Mass processions in London, Edinburgh, Belfast and Cardiff formed a living, chanting, singing work of art made up of rivers of marchers dressed in green, white and violet, the three colours of the suffragette movement. The four-city event was co-ordinated by 14-18 NOW, the cultural programme commemorating the centenary of the First World War, and Artichoke, a charity which creates public art in the UK.

More than 100 female artists worked with local communities around the country to create banners for the marches. These were joined by thousands of often equally spectacular costumes and banners made and paraded independently by the multicultural, multigenerational throng. 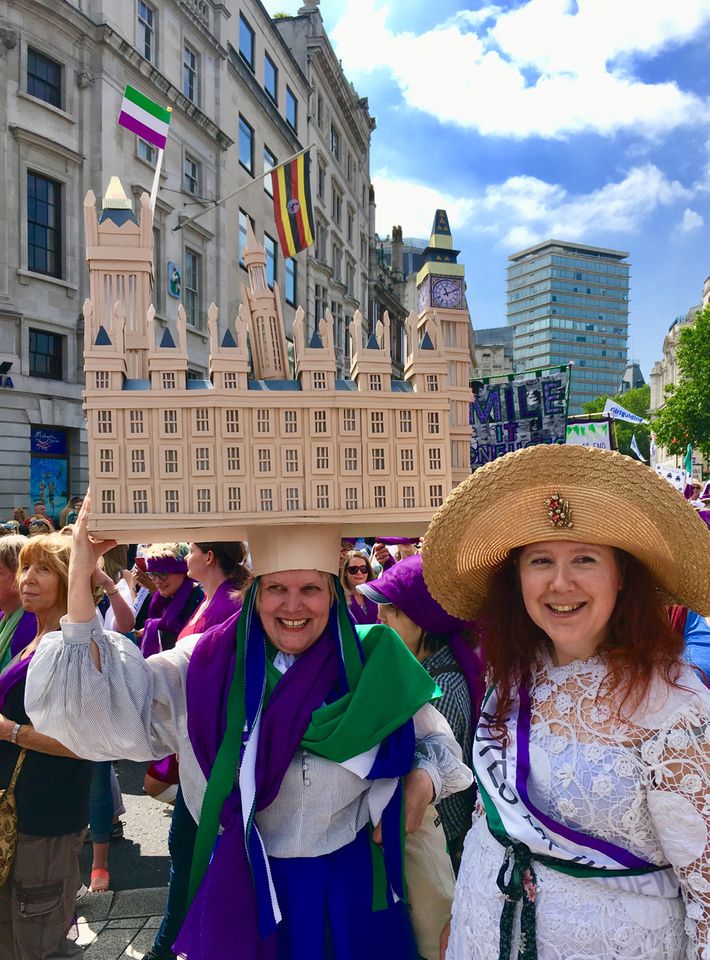 The events commemorated the mass demonstrations of the suffragettes’ campaign, as well as celebrating their ultimate victory. They also acted as a sharp reminder that there is still much to do at a time when women’s rights in Northern Ireland are a burning political issue. As marchers in London processed from Hyde Park Corner to Parliament Square, they filled Pall Mall, where 100 years ago their sisters had hurled rocks through the windows of the gentlemen’s clubs. But Sunday’s atmosphere was friendly and carnivalesque, helped by regular blasts of affirming music from sound systems dotted along the route. Nonetheless, all around there were reminders that the battles of the past have been far from forgotten, such as the banner made by the women of Camden reading “A Stone’s Throw from Westminster” or a uterus-shaped placard declaring “Our religion, laws, customs are all founded on the belief that woman was made for man.” 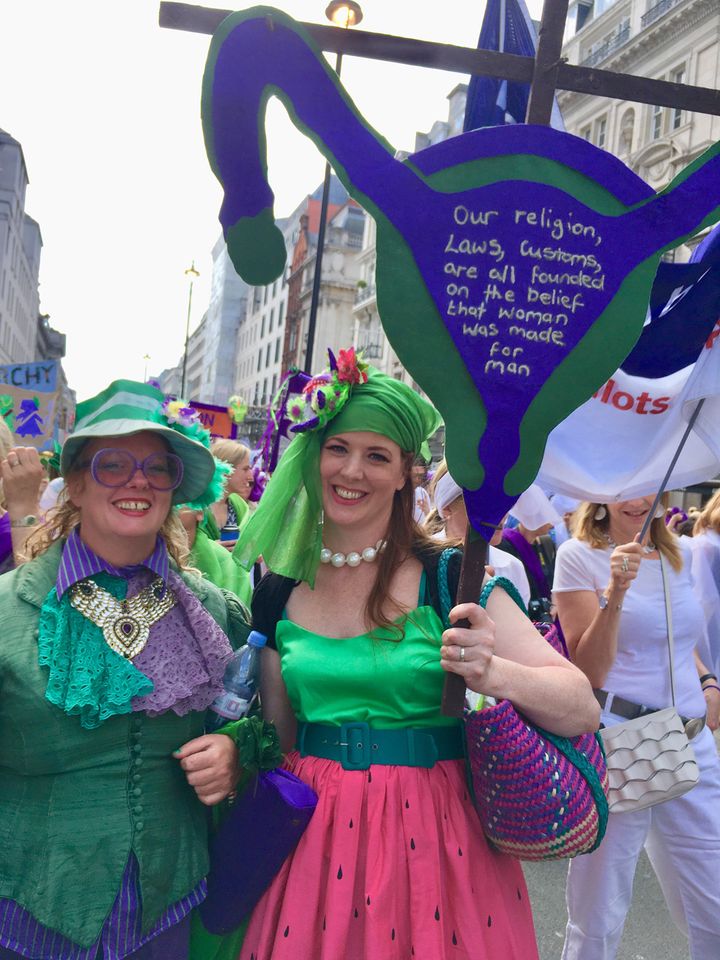 Among the throng was the artist Jessica Voorsanger, resplendent in period suffragette gear, leading her similarly-clad “Posse of Protest” from Margate, while Kirsten Dunne, a senior cultural strategy officer for the mayor of London, held a banner emblazoned with myriad interpretations of the term “gender equality”. Her boss, the deputy mayor for culture, Justine Simons—with her mother in tow—brandished a banner whose message, “Courage Calls to Courage everywhere”, echoed that held by Gillian Wearing’s statue of the suffragist leader Millicent Fawcett in Parliament Square, which the mayor’s office was instrumental in erecting earlier this year. 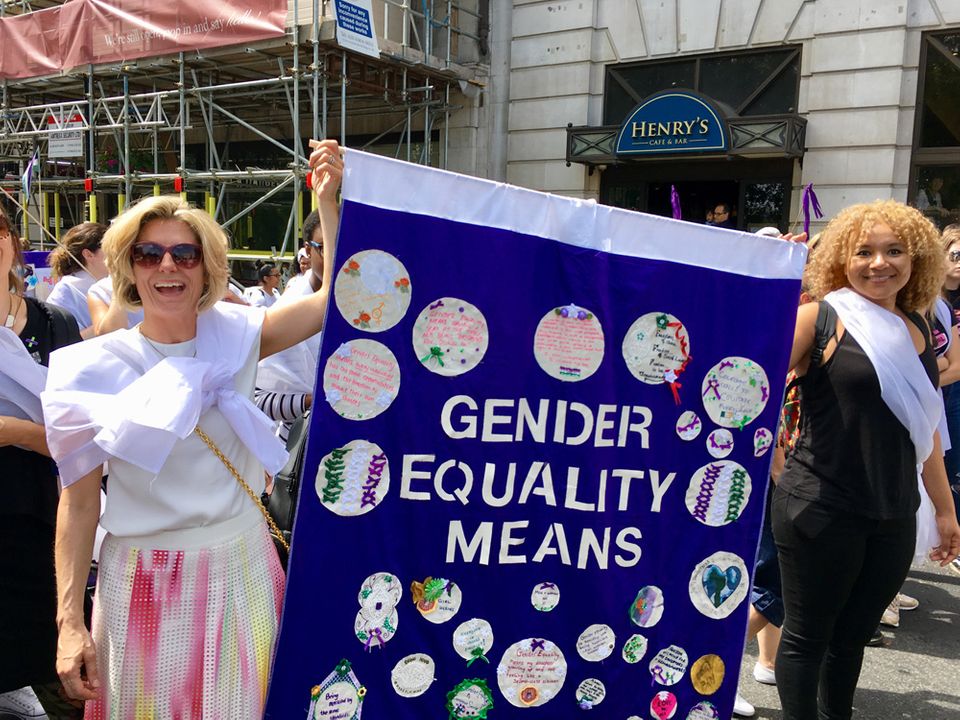 On the march: Kirsten Dunne (left), a senior cultural strategy officer for the mayor of London Louisa Buck

Your correspondent was especially happy to locate both “Camberwell” and “Lambeth” banners devoted to her current south London abode and an especially fine piece of appliqué paying tribute to her much-maligned home county. This offered a spirited riposte to the multitude of misogynist jokes it generates, declaring “Women of Essex, Neither Freaks nor Frumps”.

As we continue to strive for true equality for all, maybe the art world hordes setting up shop in Basel should be reminded—in the spirit of sisterhood—that women only got the vote in Switzerland in 1971…