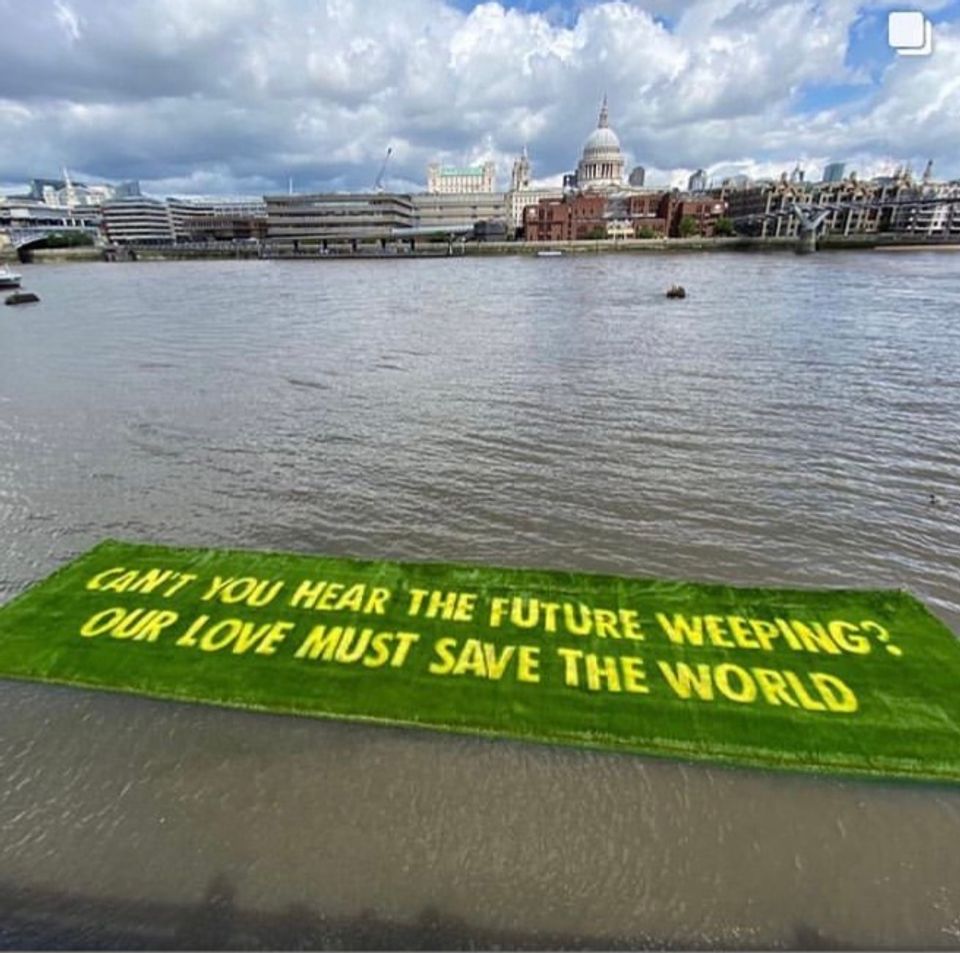 It was a morning to remember. From its first incarnation as an object of contemplation lying in state in Tate Modern, to its turbulent launch onto the choppy tidal waters of the Thames, last Friday the changing states of On the Shore, Ackroyd & Harvey’s living grass artwork took all of us present on a dramatic and unforgettable journey.

For the past nine days the artists had been assiduously growing a grassy pelt 16 metres long from a bed of woven hessian stretched across the floor of Tate Modern’s Turbine Hall. Imprinted into its surface were the words of the Booker prize winning poet and novelist Ben Okri, written in response to the urgency of the climate crisis. His desperate plea, “CAN’T YOU HEAR THE FUTURE WEEPING? OUR LOVE MUST SAVE THE WORLD ” was spelt out in fluorescent yellow, made distinct from the surrounding green by masking the grass beneath the letters and preventing them from photosynthesising. 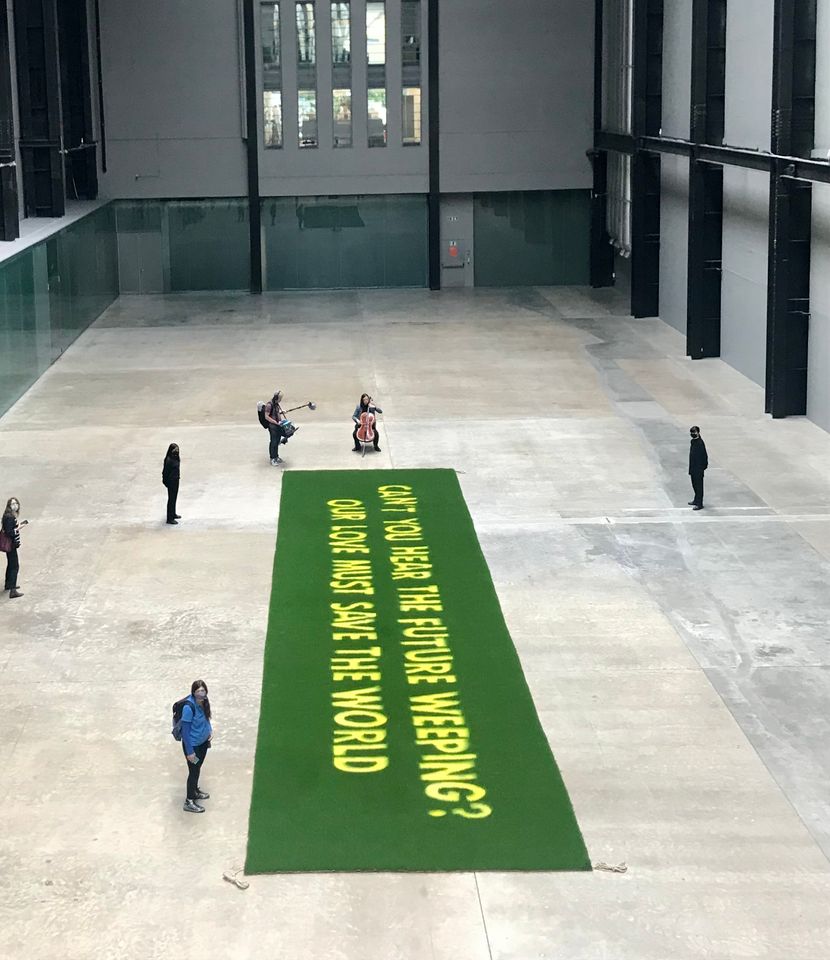 The work was first created in the Tate Modern's Turbine Hall

This was not the first time that Ackroyd & Harvey have introduced grass to Tate Modern’s Turbine Hall. Two years ago, in April 2019, a woman wearing one of their living grass coats and riding a white horse headed a parade into Tate Modern to launch Culture Declares Climate Emergency, an initiative co-founded by the artist duo and which now numbers more than 1500 individuals and organisations -with Tate an early declarer. Ackroyd & Harvey are also making their green presence felt with their current Tate Modern exhibition of Beuys’ Acorns. This glade of 100 oak trees germinated from the fruit of Beuys’s Kassel-based work 7000 Oak Trees is installed on the Museum’s South Terrace until November.

On Friday morning, shortly after the Turbine Hall opened to the public, its vast vault filled with the sound of a single cellist making an improvised response to the artist’s grassy expanse. A blast from a trumpeter then signalled the arrival of a battalion of black-clad performers. With finely-choreographed precision they rolled up the piece like a giant carpet, hooked it evenly over a succession of bamboo poles and then, in a manner similar to pall bearers, carried it out of the building. 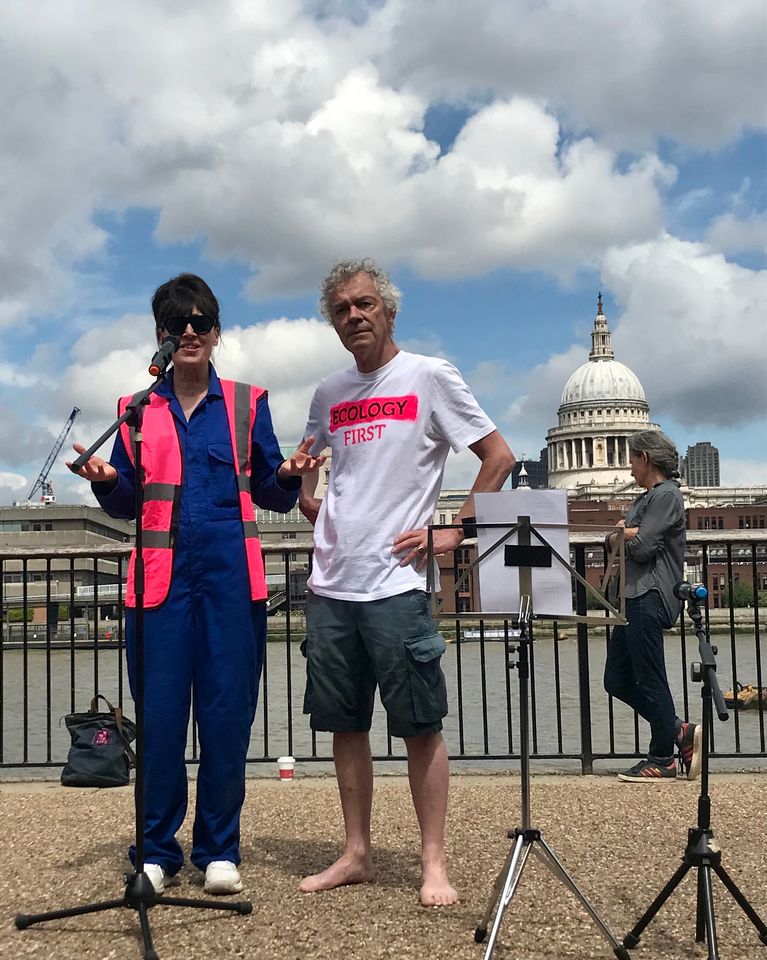 Once out of the jurisdiction of Tate, On the Shore then assumed a new incarnation as a ceremonial activist banner. Accompanied by a dancer and crowds of iPhone snappers, including the artist Gavin Turk, the weighty grassy text was paraded like a religious artefact to the Thames walkway before being lowered down over the railings and onto the foreshore of the river. This procession marked the launch of Paint the Land, a new project initiated by XR Writers Rebel which teams up writers and artists to make work with the landscape in order to raise awareness of the climate and ecological catastrophe threatening us all. On the Shore at last fulfilled its name as, at the water’s edge it was eased onto a floatation platform fashioned from 150 panels of cork. Now the work shape-shifted yet again into an animated furry raft, floating on the Thames with its surface undulating and rippling with each watery flurry of the incoming tide.

Back up on the walkway the rapidly rising river and St Paul’s cathedral acted as a backdrop for a series of passionate pleas from XR Writers Rebel to save our beleaguered planet. “This earth that we love is in great danger because of us: we have raped her, exploited her, abused her destroyed her, wrecked her, disembowelled her,” declared Ben Okri, who, after listing some more of humankind’s abuses, elaborated on his text written into Ackroyd & Harvey’s grass by offering a paean to the power of love as “the highest economy of life, the most efficient force of civilisation”. The speech ended with his stirring statement written into Ackroyd & Harvey’s grass that “only love will save the world”. 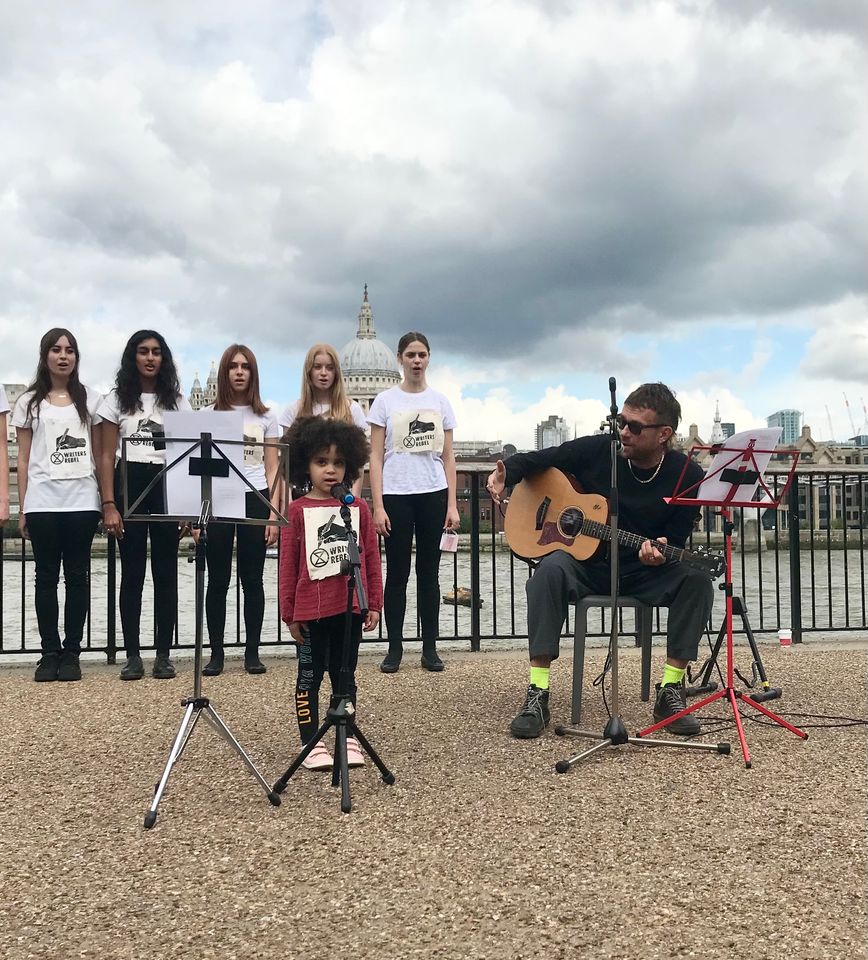 Ackroyd & Harvey declared the sight of Okri’s words on their furry grass banner bobbing on the rising waters of the Thames to be “a poetry in motion, between botany and the beast” and stated: “there is only one true economy on our planet and that is photosynthesis: photosynthesis takes light and it converts it to life and it nourishes us all—we have to give back every step of the way.”

Another star turn was the musician Damon Albarn, who performed “a fragment of a song” based on Okri’s words which the Blur and Gorillaz frontman sang with Okri’s four year old daughter Mirabella, backed by London’s Capital Children’s Choir. “It’s the biggest gig I’ve done in 2 year—and the most important,” he said.

Meanwhile as the humans sang, clapped and declaimed up on dry land, back on the Thames two mallard ducks claimed the waterbourne artwork as their new home, settling onto its grassy surface until, at the end of the day when the ebbing tide deposited it back onto the foreshore, they were gently evicted. Then this greenest of artworks was broken up, drained of water and taken away to be composted, its multiple jobs well done.