The London art world’s Brexit blues were temporarily dispelled last night (27 April) with the opening of Thaddaeus Ropac’s new gallery in a Georgian mansion in the heart of Mayfair. The grand new premises signal a significant gesture of faith in the capital’s future as a European art hub. The Austrian born, Salzburg- and Paris-based, gallerist declared that although he was “heartbroken” by the referendum result, “for me, London is still the ultimate art centre”.

Amongst a very cheery crowd that included the Arts Council England chairman Nicholas Serota, Tate Modern’s Frances Morris, and the artists Antony Gormley, Grayson Perry and Anish Kapoor—as well as a host of the highest-end European collectors—there was much admiration the new space. The architect Annabelle Selldorf was responsible for the sensitive conversion of the former premises of Mallett antiques, which before that had been the home of the Albemarle Club and the bishops of Ely.

Nobody minded that at times the conversation had to compete with the sounds of a work by the young English artist Oliver Beer. The performance involved professional singers positioned in the corners of the main entrance hall, making the building reverberate uncannily with what were apparently its own particular resonant notes. “It’s a bit like an exorcism in reverse— Thaddaeus is putting his spirit in every part of the building” commented one collector. 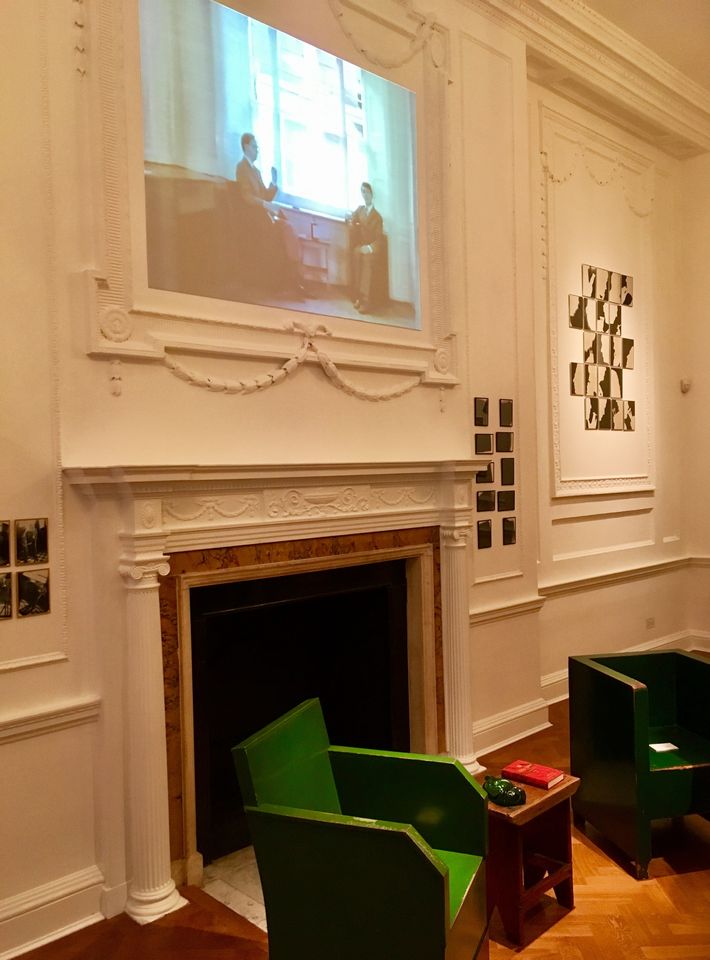 There was more artistic noise emanating from the front gallery where, among the elaborate 18th-century mouldings, Gilbert & George were conjuring up spirits of a different kind with their 1970s photographic Drinking Pieces, which depict the couple in various states of inebriation. These were joined by a trio of Video Sculptures in which a youthful G&G smoke, drink and stroll to the sounds of Grieg and Elgar as well as birdsong and thunder. Presiding over their earlier drunken incarnations, today’s decidedly more sober G&G revealed that the two rather battered green chairs positioned by the fireplace (along with an empty bottles of Gordon’s gin) were the very same ones used in the 1972 video Gordon’s Makes Us Drunk, which was playing above the mantelpiece. “They were the only two chairs that we owned at the time,” Gilbert informed me, whilst also stating that they were most emphatically not for sale. “We still want them back at home,” he said.