The Buck Stopped Here: set sail from London to Bristol for this week’s top shows including Elizabeth Peyton and John Akomfrah

It’s especially appropriate that Vertigo Sea (2015), John Akomfrah’s sumptuous film—which was the talk of last year’s Venice Biennale—receives its UK premiere in Bristol. For the seafaring city was one of the earliest and most important centres of the British slave trade, and appalling images of slavery form a significant strand within Akomfrah’s multi-layered and wide-reaching meditation on mankind’s relationship with the ocean. The film merges the ecological, the historical and the political—from whaling and polar bear hunting to diving seabirds, scavenging starfish, and the plight of today’s refugees launching themselves in perilously flimsy vessels in the hope of a better life. It is also apt that Vertigo Sea is accompanied by Tropikos (2016), a new film that inserts the fruits of 16th-century African plunder (including people) into England’s lush green pleasantness. This “experimental costume drama” of all-new footage shot in the West Country waterways around the Tamar valley and Plymouth, acts as a stark reminder of the buried roots of British colonialism. And it is a fitting prelude to Vertigo Sea’s wider references.

Tropikos is also to be seen at Akomfrah’s Lisson Gallery debut, along with two other ambitious new film installations and a series of photographic stills from them all. The two-screen Auto Da Fé (2016) continues Akomfrah’s long-standing interest in migration by presenting a series of tropical and coastal scenarios featuring a succession of departures and arrivals triggered by religious persecution. These begin with the fleeing of Sephardic Jews from Catholic Brazil to Barbados in the mid-17th century, and extend up to the on-going exodus from the northern Iraqi town of Mosul, occupied by Isil since June 2014. Ghosts of a more abstract kind haunt The Airport (2016) in which figures in period costume—as well as an astronaut and a person in a monkey suit, in homage to Stanley Kubrick—wander enigmatically through a derelict airport and a deserted former Spartan stronghold in southern Greece. All three works show a more ruminative Akomfrah eschewing his earlier trademark splicing of new and archive footage in favour of specially-shot, fictional episodes. But I find his previous mixing of material carries more bite. 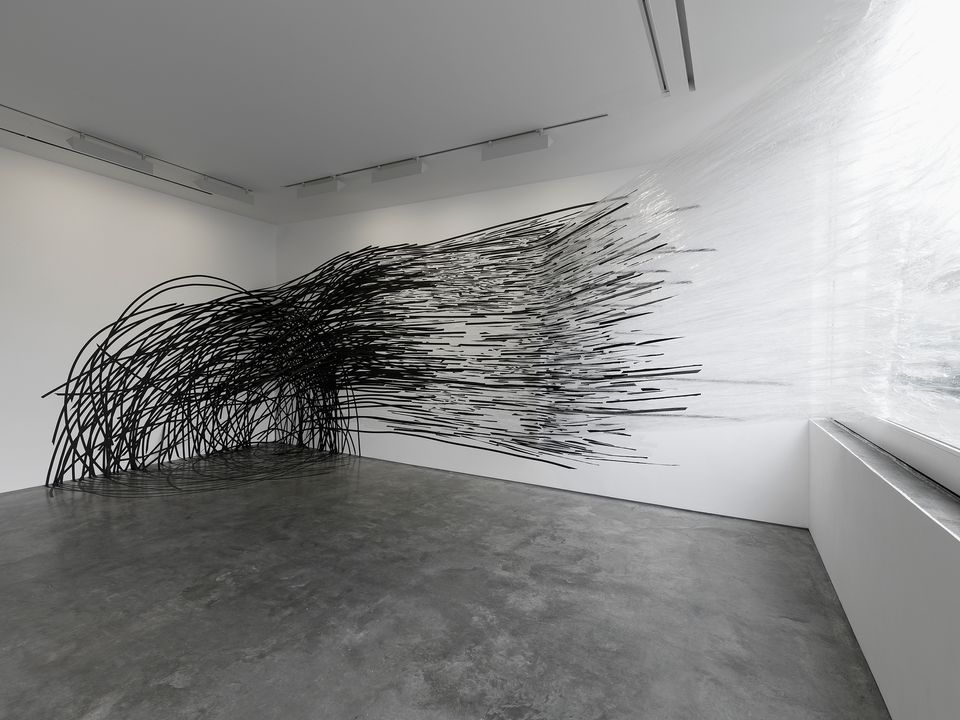 Lisson Gallery are currently showing an impressive double whammy, with their other space devoted to Line, an intelligent, museum-quality show that examines the act of drawing. This investigation into both the physical act and the intellectual proposition of drawing has been organised by the Drawing Room and harnesses the power of 15 top-notch artists of all generations—many from the Lisson stable—with much of the work either newly made or especially reinstalled for this show.

One of the highlights is Sol Lewitt’s Wall Drawing #157, a diagonal line first drawn according to Lewitt’s instructions by Lisson’s director and co-founder, Nicholas Logsdail, back in 1973. Other historical pieces include Fred Sandback’s 1974 work in which four equal lengths of ochre-coloured yarn cross a right-angled corner and activate the entire space of the gallery and Susan Hiller’s ritualistic Work in Progress (1980), which involved the daily unravelling of a canvas into a “thread drawing”. Julian Opie has used strips of black vinyl attached to the wall to recreate his experience of walking through a pine forest; while Berlin artist Monika Grzymala’s explosive tangle of seven kilometres of black and transparent sticky tape, sprouts thicket-like from a wall into the gallery.

Other artists who play off Paul Klee’s notion of “taking a line for a walk” range from Ceal Floyer, who has painted a splashy white stripe through the gallery using a sports field line-marking machine until its paint supply ran out to Richard Long and his wall text A Four Day Walk (1980), which described a 84-mile walk, to Viennese artist Florian Pumhosl who, in his animated film Tract (2011), takes a line for a dance instead. 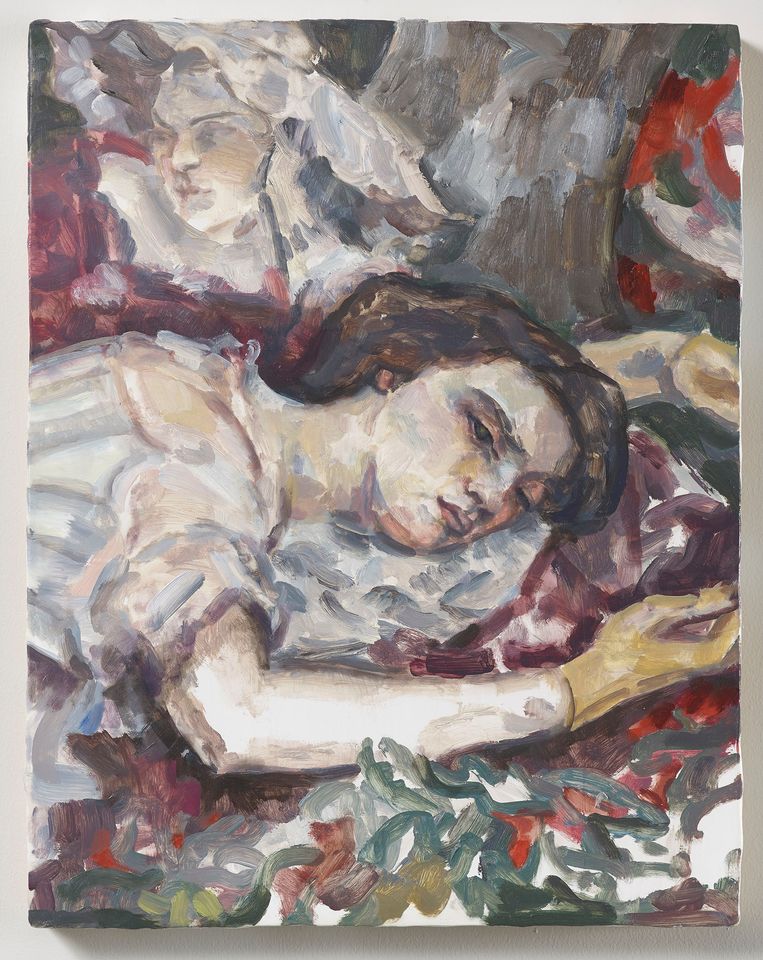 Elizabeth Peyton has always mixed the past and the present: over the years monarchs living and dead and the occasional historical figure have often popped up amongst her luscious little paintings of pensive rock stars, film idols, friends and fellow artists. Now her new work at Sadie Coles HQ shows the objects of her fascination extending ever wider. Scenes from Richard Wagner’s Ring Cycle and a couple of languorous ladies from a 19th-century Gustave Courbet painting hang alongside such contemporary subjects as an oil portrait of the Danish punk musician Dan Kjaer Nielsen, two studies of the artist’s pet dachshund and a crayon drawing of the fashion designer Phoebe Philo.

But what this show especially underlines is Peyton’s skill in a range of techniques beyond her best-known oils on board, which here are rather more muted and subdued. Instead it is her vivacious coloured pencil studies and bold watercolours that carry the day—most notably two limpid portraits of Billie Holiday—and also a striking pair of linocuts in which her lush brushstrokes have been honed into a sharply graphic, Matisse-like, economy of line. 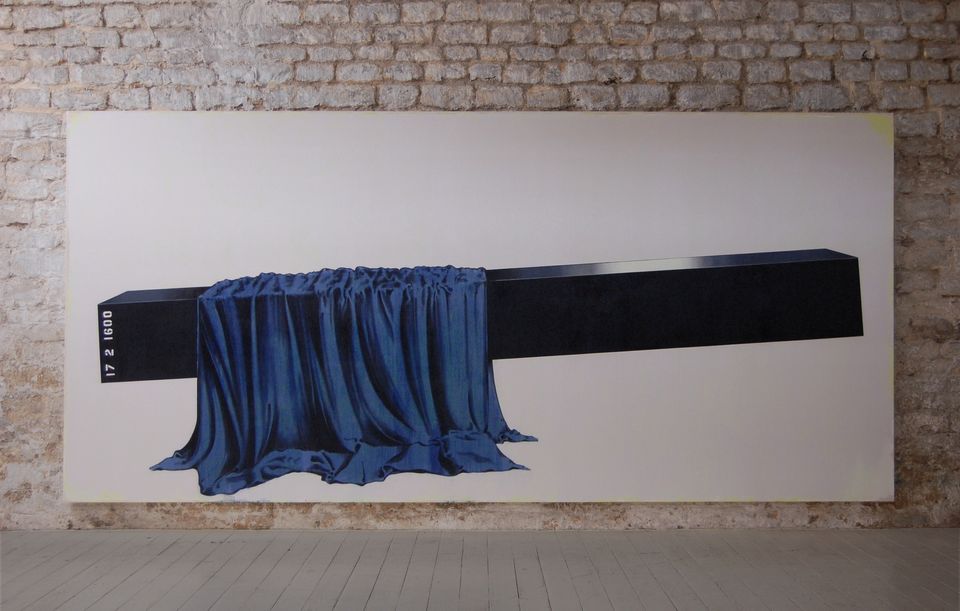 One of the starting points for Michael Simpson’s paintings is what the artist calls “the infamy of religious history”. But there is a lot else going on in these striking and enigmatic paintings, which betray chinks and hints of hidden histories in their repeatedly over-painted surfaces. Most notably there is a deep engagement with the history of painting, especially the complex spatial situations and perspectival tropes of 15th-century Venetian and early Flemish work. This in turn is sideswiped by Simpson’s evident regard for the rigorous pragmatics of US Minimalism—the show’s title is Flat Surface Painting, after all. Simpson studied painting at the Royal College of Art with the likes of David Hockney, Paul Caulfield and Derek Boshier, but it was politics, rather than Pop that caught his imagination. And he in turn has been an inspirational teacher to many generations of artists, whilst always developing his own paintings.

Simpson tends to work in long-standing series and the earliest works in the show are from his Bench Painting series (1989-2009), in which coffin-like benches float against a white background. The texts of the 16th-century free thinker Giordano Bruno and others accompany some of these benches as do ominous, shroud-like pieces of drapery. More recent works made over the past couple of years are redolent with an oblique sense of smothered repression and denial. A row of trompe l’oeil Leper Squint canvases depict repeated ladders leading up to what look like small blacked-out windows: these apertures apparently refer to viewing holes built into church walls to keep undesirables apart from congregations. Other new works offer suggestively vacant confessional boxes and an empty staircase based on the Islamic minbar, leading to nowhere. This is bold, original and haunting work that needs wider exposure.