UPDATE: 29 July, the Marble Arch Mound has now been closed 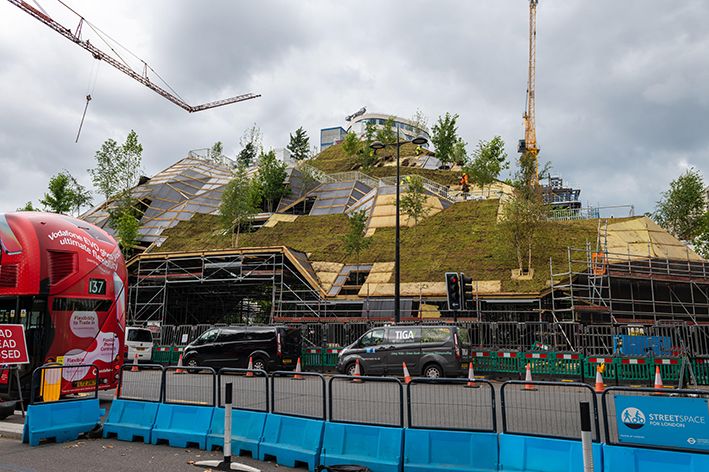 It is the £2m manmade hillock that has been compared to a slag heap and the Teletubby house.

The recently opened Marble Arch Mound had, according to Westminster Council, promised "breathtaking" views from "on top of the world" (well, 82ft, so not quite) to encourage people to come back into central London.

Instead, what greets visitors who paid £8 to climb the hill is not the bucolic, birds tweeting idyll they were promised but instead some scaffolding covered in scrappy turf, surrounded by London buses, honking white vans and a fine display of commercial waste bins.

The Twitterati have been having a field day. Skew Spew Barmy Hairdo Curmudgeon Bigot and Smug described the beleaguered mound as a "slag heap that manages to convey the delights of a fly tipping layby found in the lawless wastelands of the North." (The Art Newspaper does not condone such opinions about "the North".)

I went to the Marble Arch Mound today. It cost £2 million to build, and today was launch day, but it was still quite quiet.

Here is a short thread with info.

First, the original plan drawings and the marketing description do not quite match reality. pic.twitter.com/Km4YFbxySm

The reaction to London's new "worst" tourist attraction (an accolade for which it has some stiff competition) has prompted Westminster Council to apologise for the mound's "teething problems" and refund those who bought tickets.

"In light of the delay, we are offering anybody who has booked a visit during the first week a return ticket free of charge so that they can enjoy the full experience and the landscape once it has had time to bed in and grow," a council spokesperson says.