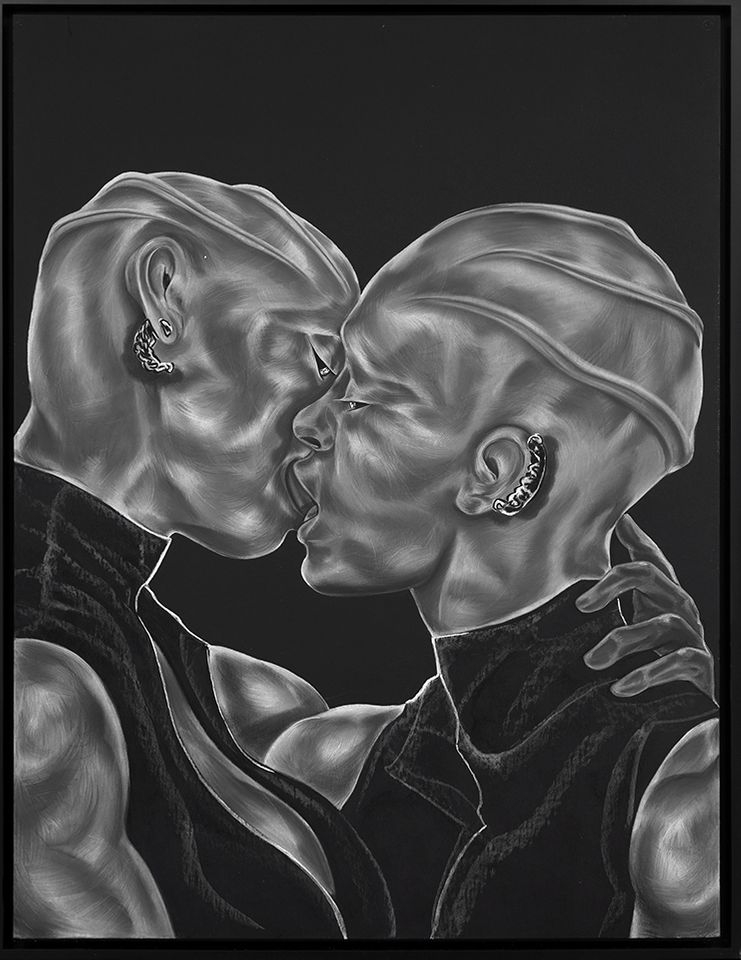 In her epic cycle of 40 monochrome drawings commissioned for the Barbican's Curve Gallery, the US-Nigerian artist Toyin Ojih Odutola immerses us in an imaginary pre-historic civilisation ruled by muscular warrior women and served by naked male humanoids. So far, so Girl Power, but this rich, provocative show is much more than a riposte to white male patriarchy.

The show's title A Countervailing Theory derives from a term used in politics and economics to describe the idea of countering the effect of an existing power with an equal force. As they unfold along the wall of the Curve, these striking, often very large-scale, works offer glimpses into the customs of a world in which conventional expectations of gender, race and sexuality are inverted and societal and cultural norms challenged.

Cinematic storyboarding and graphic novels, as well as the grandest of old masterly figure compositions, are among the influences that feed into Ojih Odutola’s powerful monochrome scenarios, which are all executed with virtuoso technique in charcoal, white chalk and pastel on black backgrounds. 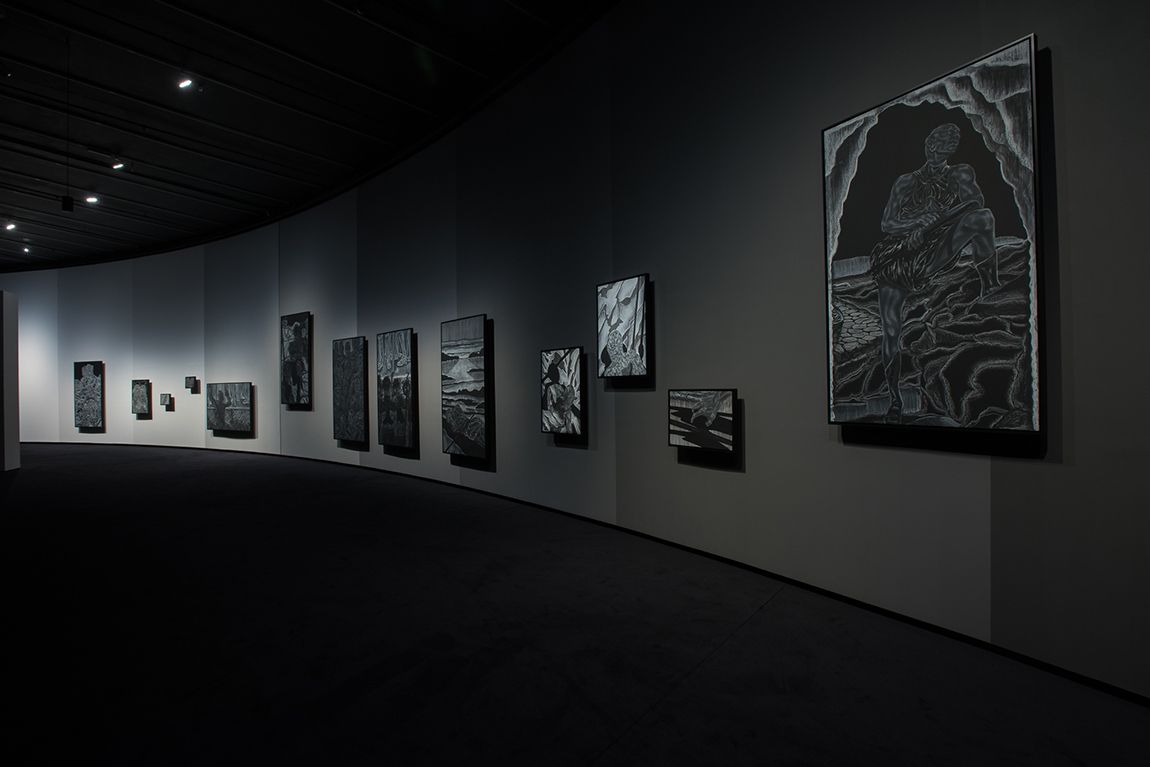 Subservient men toil, heads bowed and avoiding eye contact, while the females cradle their weapons with an easy confidence. Worker males are made, not born, with sinuous seams running across bodies which have no genitals. Whereas female babies gestate in dangling transparent pods and then spend their childhoods roaming freely in sociable groups. Accompanying information tells us that emotional and sexual relationships are forbidden between these two communities. Any co-mingling between the classes is strictly taboo and only same-sex couplings are permitted. Some of the drawings in the sequence tell of an illicit liaison between a worker and a warrior, but it is soon ruthlessly rejected by the ruling elite. The lovers end up ossified into rock formations with their united heads forming a mountainous crag.

Adding to the multi-layered drama and overall cinematic feel of the installation is an atmospheric soundscape by Peter Adjaye. This responds to and complements the drawings, using a diverse range of sounds including wind, water, electronics and West African instruments. Often Adjaye’s elemental compositions find their counterpart in the landscape that functions as an active participant in Ojih Odutola’s drawings. The bodies of her protagonists are often both embedded within and emerging out of the richly textured geological forms that surround them. Especially seductive are the lush effects conjured out of the most minimal of palettes with Ojih Odutola taking an evident relish in showing the play of light across skin and musculature, as well as the rhythmic patterns of rock strata, soil and shadows. 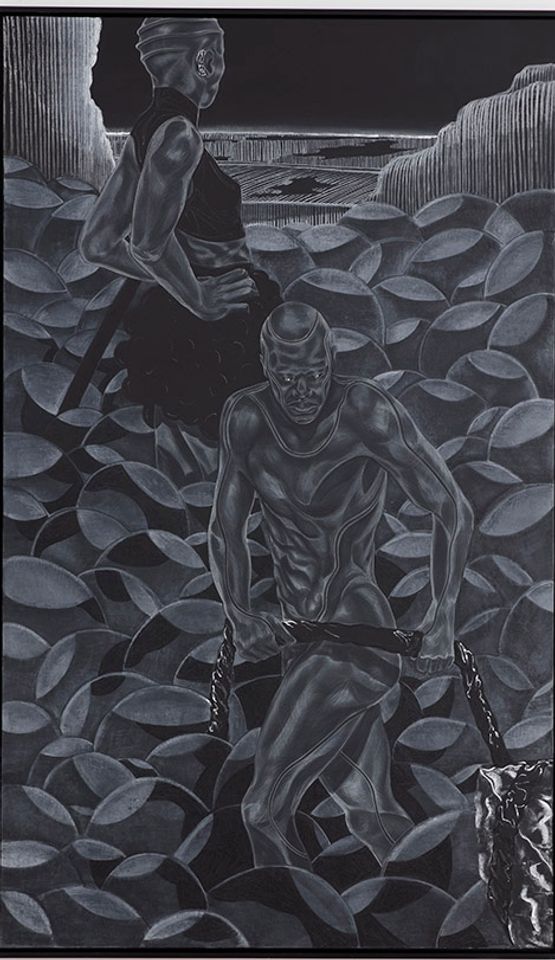 At the end of the show the installation is subject to yet another layer of fiction. An official-looking text panel written by the artist explains that all her drawings are in fact the life-sized facsimiles of embellished pieces of black shale rock discovered by a Chinese mining company in Central Nigeria. Ojih Odutola identifies herself as an archeological anthropologist charged with piecing together what appears to be evidence of a sophisticated early civilization that predates any other from the region. Significantly she also makes a point of complicating any clear readings of what we see, stating that the full meaning of this fractured “otherworldly parable” remains unknown, with its component parts assembled “in the order we intuited was intentioned by their makers.”

With this final fantastical flourish Ojih Odutola confirms her intention that ‘A Countervailing Theory’ should not present a singular judgment or point of view. Instead the exhibition offers a series of porous nuanced propositions, open to interpretation by each of us. Its speculative depiction of a queer, Black, female-dominated society comprehensively flips historical hierarchies and power structures, even to the extent of reversing the traditional drawing practice of inscribing dark marks on white. Yet at the same time this compelling and visually captivating alternative world is also brutally oppressive, based on subjugation and presided over by a dictatorial ruling class who savagely see off any challenge to their collective status quo. Throughout we are repeatedly reminded of the way in which stories are created to support different viewpoints and that too much power inevitably corrupts whoever wields it.