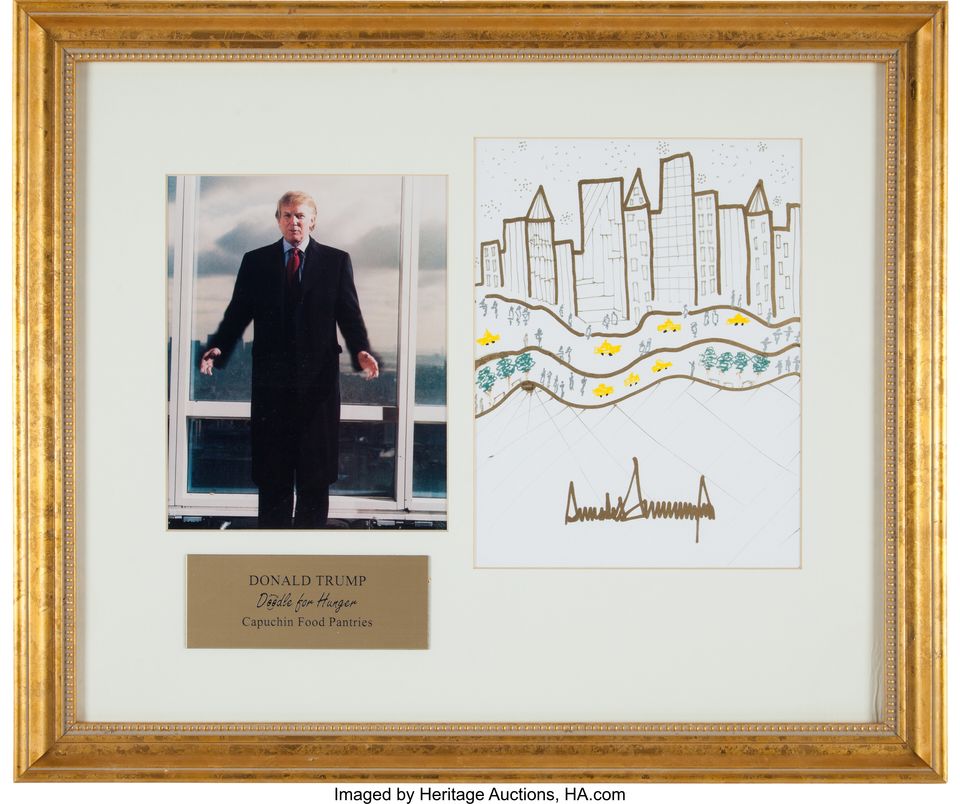 “Deals are my art form,” reads the opening paragraph of Donald Trump’s memoir, The Art of the Deal, and yet the US President seems to have produced quite a few sketches over the years, too. One example, complete with a photograph portrait, is up for sale at Heritage Auctions in Dallas, Texas, on 2 December. Originally created for a New York charity auction to benefit the St Francis Food Pantries and Shelters in 2005, Trump's doodle measures 9 x 11.5 inches and depicts the New York skyline—evidently a favourite subject of the real estate developer—with wavy streets, childlike yellow cabs, and lightly outlined pedestrians in grey. Above the city, the sky gently bursts with fireworks (or maybe stars)? Trump's rising-and-setting signature unfurls loudly at the bottom, a skyline onto itself. At the time of writing, a couple of early bids had placed the doodle in the $8,500 range. However, the price could potentially exceed $15,000. A less detailed skyline sketch fetched $29,184 at a Los Angeles auction back in July. And yet another in black marker of the Empire State Building sold for $16,000 in October. “What makes this sketch stand out from any others previously offered is the precise attention to detail and the color Trump used to enhance the city view,” says Tom Slater, director of Americana at Heritage. Yet as Dan Ackerman, consignment director at Heritage, explained to The New York Post, “You have your intrinsic value and association value. As far as the Trump artwork is concerned, it’s strictly the associated value.”