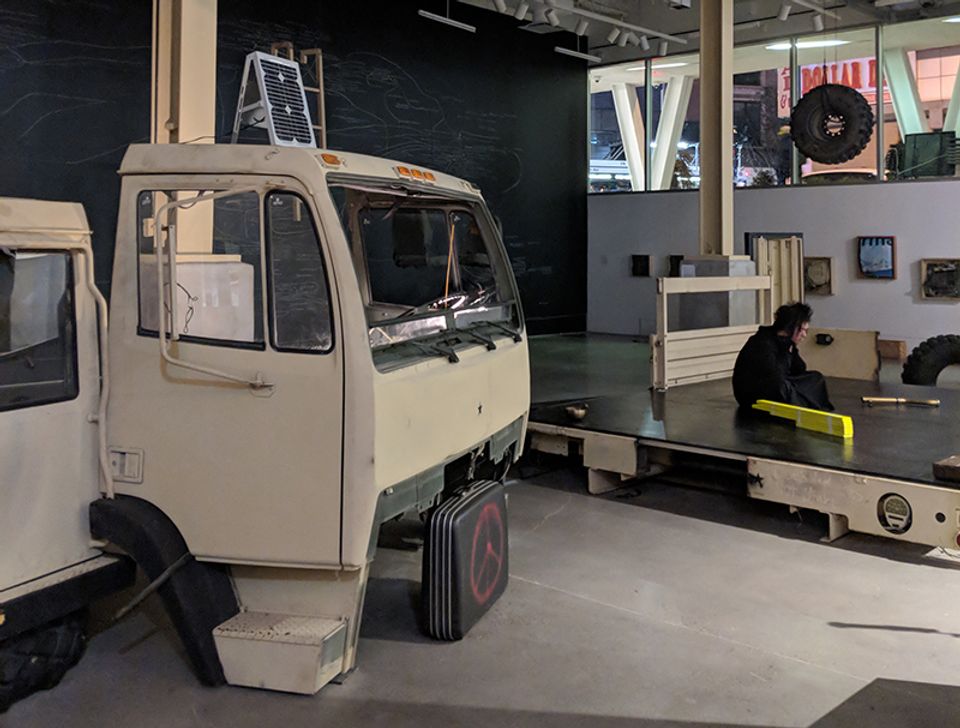 BRIC House in Brooklyn might have the borough’s most radical art “platform” yet: the cab from a 19,000-pound military cargo truck (light medium tactical vehicle, LMTV) used in the Gulf and Afghan wars, turned into a stage for performances. This is one piece of the LMTV that the artist Mary Mattingly took apart at Bric and placed throughout the gallery for her exhibition What Happens After (until 11 November). Last night (22 October), sTo Len, one of a group of artists who helped Mattingly design the exhibition, used the truck’s cab as a mixing board station to blend, edit and build sounds in his live performance piece, Radio Soul. The title of the work nods to the anti-Taliban Afghan pirate radio station Radio Sol, founded to focus on women’s issues, the popularity of radio in Afghanistan and the use of radio during wartime. sTo used contact microphones to pick up the noises made as he scraped, dragged objects and banged on parts of the disassembled vehicle, then mixed these sounds with snippets of music from pirate radio frequencies in Kuwait and Afghanistan, meant to evoke the sounds of war. The programme Decolonizing the Land, Decolonizing the Mind, put on by the New York-based arts non-profit A Blade of Grass, followed sTo’s work and included a performance by the Wasauksing First Nation artist Maria Hupfield, film screenings and a panel discussion (held on the cab, of course).