Art museums should use their endowments to help battle climate change

In April, Harvard University announced plans to realign its $40bn endowment to reflect “net zero” greenhouse gas emissions by 2050—other US institutions can do the same 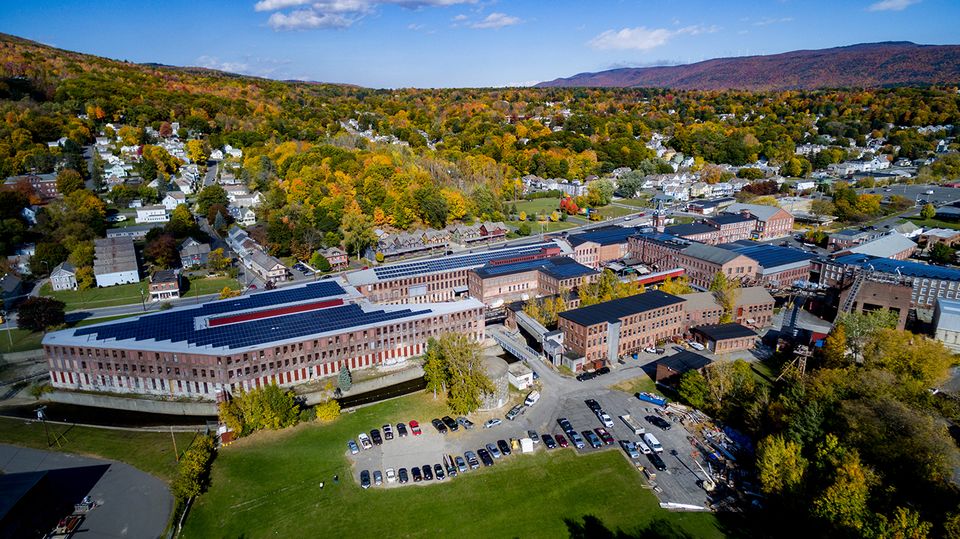 Many of the 28 buildings on MASS MoCA's 16-acre museum campus in North Adams, Massachusetts are covered with solar panels, which meet 25% of the museum's annual energy needs Douglas Mason, courtesy of MASS MoCA

It is perhaps fitting that the 50th anniversary of Earth Day in April came at a moment of acute awareness of our own fragility as a species. It has been a solemn yet precious time for introspection, as spring unfolds dramatically around us. The coronavirus has brought some silver linings: among them, cities around the world have seen improvements in air quality and for some, the first blue skies in years.

As we start to phase back into a working economy, museums will play an important role in helping us restart: through the healing power of the arts, in reminding us of the lessons we can learn from history, and in conveying the excitement—and critical importance—of science. While managing the short-term response to Covid-19, it is important for museums to not lose sight of another great challenge with long-lasting impacts, requiring unprecedented worldwide collaboration: climate change.

Even with carbon emissions down for the year, we are not on track to meet the Paris Agreement goal to get global warming under control. 2020 is set to be the second-hottest year on record. Some museums have already been proactive in addressing climate change, raising awareness for the issue directly through exhibitions and by reducing their own carbon footprint through the embrace of green buildings and the conservation of water and energy. However, one of the most powerful actions a museum can take is often overlooked: considering its endowment and the role it plays in our planet’s fight for life.

In previous posts for the American Alliance of Museums, I outlined why museums should look to sustainable investments—those incorporating Environmental, Social, and Governance (ESG) factors in their investment process—both to mitigate risk within portfolios and as a way to deepen an institution’s engagement with its mission and values. The recent performance of sustainable investments has been notable throughout the volatility tied to Covid-19.

Much of this performance is attributed to sustainable funds’ investments in sectors like health care and technology and avoidance of heavily pollutant sectors like oil and gas, cruises and airlines. Perhaps more importantly, the companies that score high on ESG tend to embrace a “long-term stakeholder centric behaviour model”: they are mindful of their environmental challenges, focus on their broader stakeholders (including employees, supply chains, and local communities, not just shareholders), and govern themselves ethically. Investors are clearly betting that this mindset will allow ESG-focused companies to lead us out of this recession, and throughout the next economic cycle.

It is not a coincidence that Harvard University announced in April its intention to realign its $40bn endowment to reflect “net zero” greenhouse gas emissions by 2050 in accordance with the Paris Agreement, the first major US college endowment to make this commitment. The strategy will require that by 2050, all man-made greenhouse-gas emissions linked to their underlying investments be offset by efforts to remove them from the atmosphere. This effort is part of a multifaceted “sustainability vision” for the university, along with plans to reduce the carbon footprint of Harvard's campus and the allocation of funds to research on energy and emissions reduction.

Harvard is not the only university considering the environmental impacts of its endowment—peer institutions including Georgetown, Brown and the University of California system have announced comprehensive plans to divest from fossil fuels. Over the long term, these market pressures may incentivise behaviour change among these firms, driving improvements in sustainability and transparency—or push them out of business entirely with the advent of cheaper, clean alternatives.

What is interesting about Harvard’s approach is that it has chosen to work proactively with high-carbon companies today in an effort to help them transition to more sustainable practices—known in the industry as shareholder engagement. The big implication of Harvard’s announcement is in its potential to shift the entire asset-management industry towards carbon-awareness—a shift that has been brewing in the meteoric rise of interest in sustainable investing, and on the heels of a major investment firm acknowledging that climate change has become a defining factor in companies’ long-term prospects.

With $30bn in collective capital, US museums can also be a formidable force in this movement. As institutions rooted in communities with diverse stakeholders, museums should consider how to best respond to the environmental challenges those communities will (or already do) face, and the underlying impact of their endowments on these issues. The tide is starting to turn.

The Phipps Conservatory and Botanical Gardens in Pittsburgh is an early mover on this front, embracing sustainable horticultural and operational practices and using 100% renewable energy on its campus. In 2012, Phipps developed the Center for Sustainable Landscapes, the first museum building in the world to meet four of the highest green building standards, including the Living Building Challenge and LEED Platinum. Recently, Phipps’ board of trustees has been focused on better aligning its finances with its mission and values in regard to both sponsorships and investments. In an effort to lead by example on environmental issues, Phipps has shifted its investments away from fossil fuels to invest proactively in clean energy, while also screening out investments in major pesticide, junk food, tobacco and weapons producers.

MASS MoCA in North Adams, Massachusetts has also been concerned with issues of sustainability and environmental responsibility since its founding. It was built by repurposing over 1m sq. ft of a 19th-century factory complex, significantly reducing potential carbon emissions in the museum's construction. The result is a singular 21st-century centre for the creation of ambitious visual and performing arts projects, deeply connected to the industrial roots of its community. The museum was an early adopter of solar energy and generates 25% of its energy onsite. Its programming has attracted enough visitors to help revitalise the economy of North Adams after a significant period of economic decline.

MASS MoCA is now also shifting its endowment towards a long-term investment strategy that embraces sustainability and focuses on socially responsible investments, community infrastructure and affordable housing—including housing for artists, who are central to its mission. Peer institutions should use this moment of introspection to follow suit: playing their own parts to drive a more sustainable—and resilient—world.

• Anna Raginskaya is a financial advisor with the Blue Rider Group at Morgan Stanley. The views expressed here are those of the author and may not necessarily reflect the views of Morgan Stanley or its affiliates.