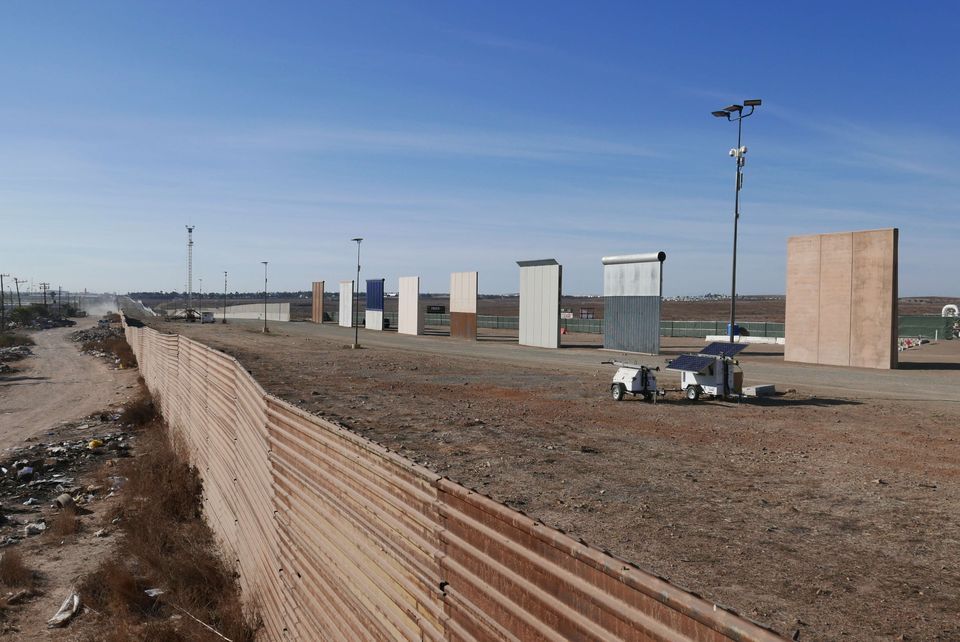 The border wall prototypes as seen from the Mexican side of the border.

Christoph Büchel has a habit of leaving chaos in his wake. It is, arguably, a clear intention of his art. He has created combustible situations and stood back to watch the fireworks in places such as Venice, where he created a working mosque in a deconsecrated church that was shut down by authorities after only two weeks, and Tasmania, where a stand offering genetic testing, asking visitors to the Museum of Old and New Art “Are you of Aboriginal descent?”, was removed following feedback from Tasmanian Aboriginal people.

Now, he has turned his attention to President Donald Trump’s proposed border wall with his faux-arts organisation M.A.G.A. (Make Art Great Again). He is approaching it with his customary detachment. His name is only dimly associated with the project publicly; M.A.G.A. has been promoted in tweets by his gallery, Hauser & Wirth, and has its own website, from which Büchel’s name is absent. A lawyer and adviser to the project, Sergio Muñoz Sarmiento, has appeared on Fox & Friends First speaking on Büchel’s behalf, reinforcing M.A.G.A.’s lame (and, frankly, obvious) contention that the prototypes resemble land art. In response to a jaw-dropping comment from the Fox anchor about how Confederate statues represent a “past that people don’t agree with in terms of slavery”, Sarmiento shot off a classic right-wing canard in speculating about how “current cultural movements [are] impacting on what is deemed to be politically correct”. This is textbook Büchel: there are no moral absolutes—it is just how we view traumatic historic moments that changes.

Büchel has gone on the record only in the New York Times, where he stated that the gathering of border-wall prototypes in Otay Mesa, San Diego, “is a collective sculpture”. Claiming that his political position was “not interesting in this context”, he added that even if President Trump’s wall is not built, the prototypes “need to be preserved because they can signify and change meaning through time. They can remind people that there was once the idea to have this border wall.”

This might be a good moment to recall Trump’s rhetoric about the wall. When he announced his Republican candidacy on 16 June 2015, he said: “When Mexico sends its people, they’re not sending their best… they’re bringing drugs. They’re bringing crime. They’re rapists. And some, I assume, are good people.”

The wall is, without question, a xenophobic project. But Büchel still chooses ambivalence when dealing with it. His idea that the prototypes should be preserved for posterity could be compelling if allied to a condemnation of Trump’s extremism: that the prototypes should stand as a testament to a dark moment in US history that should be reflected on so that it is never repeated. Trump should not be erased from history.

But Büchel’s position is cowardly, concerned more with a weak aping of arts organisations’ mission statements and a feeble satirising of land art. Words in the open letter, now signed by many artists, writers and curators protesting against Büchel’s project, leap to mind: that Büchel’s form of contemporary art is more interested in “spectacle and irony” than in “critically dismantling oppressive structures that undermine the lives of the most vulnerable”. Oh, how politically correct, you can imagine Büchel sneering.

So, you might ask, why give him the oxygen of publicity he seeks by snapping at the bait? After all, his latest petition is failing, with only 40 signatures in total as we went to press; surely, only an intervention from Trump can save it, which probably explains Büchel’s adviser’s appearance on the president’s favourite Fox News programme.

But sometimes the worst excesses of contemporary art need to be called out. Here, I turn to Tom Eccles, the director of the centre for curatorial studies at Bard College, quoted in the New York Times. “Naming the Berlin Wall a land art project—or conceptual art—doesn’t make it such,” he said. “These abhorrent things on the border are not art and never will be.” The co-opting of symbols of hatred and oppression as art should not go unchallenged, whatever the artist’s intention.