Doubly lost: why the Salvator Mundi's failure to show up at the Louvre is to be greatly regretted

Insurance measures allowed the Leonardo painting to be included in the Louvre’s blockbuster if the loan was confirmed by 1 January. Now that date has passed, Martin Kemp laments its disappearance 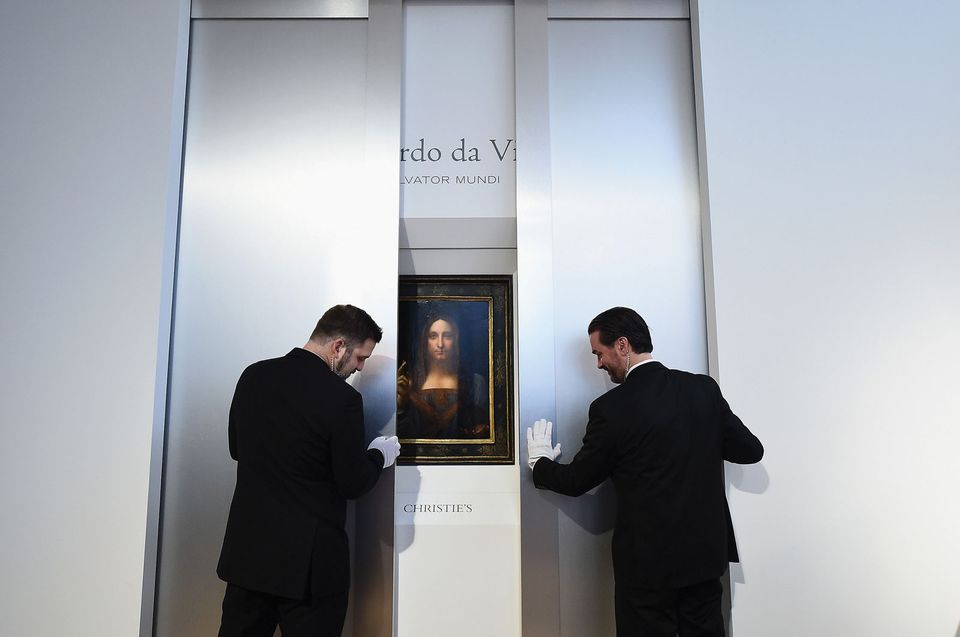 Leonardo’s Salvator Mundi was sold to an anonymous bidder for $450m at Christie’s New York on 15 November 2017 and has been lost to public view ever since Photo: Ilya S. Savenok/Getty Images for Christie’s Auction House

Leonardo’s much-disputed Salvator Mundi is lost to public view, and has been since its sale to an anonymous bidder at Christie’s New York on 15 November 2017. It is also lost to view in the same sense that the Mona Lisa is: it is almost impossible to see her afresh through the obscuring fogs of misapprehension and legend. The blurring of our view of the Salvator has been concentrated into nine years since its exhibition at London’s National Gallery. The dominant factor has been the extraordinary price of $450m, which is less a record for an Old Master than the cost of extremely scarce real estate in Leonardo Land.

The vacuum has been filled by press stories—even when some of the journalists involved know (and have confessed to me) that what they are reporting does not stand up to scrutiny. If someone says the record-breaking Leonardo is not a Leonardo, that is news. To say it is by Leonardo is not news.

A number of prominent news stories have involved mega-rich Saudi princes with a penchant for impenetrable secrecy. The stories were given fresh impetus by the painting’s last-minute non-appearance in the Louvre exhibition. None of the speculations have been substantiated.

When the stakes are so high, judgements become personalised. A tweet (subsequently taken down) accused me with my co-authors of “intimidating academics who disagreed with them”, and designated us as “cono-sneers” (quite funny). Given the circumstances, a bit of general intimidation might come in handy, but I have no sense of how I might accomplish it. Once personalisation occurs, stances of the protagonists become rigid and potentially rancid. Those propagating stories rely upon personalisation for vivid effect. For instance, the previous owner, Robert Simon has been accused of misrepresenting what was said during and after the private viewing of the painting at the National Gallery in 2008, even though he has full documentation to the contrary.

In such circumstances, the sober and systematic analysis of primary sources is ill-placed to compete for attention. This is particularly true of the Leonardo scholar Margaret Dalivalle’s cogent analy­ses of very difficult British inventories.

It has become hard to look fairly at the evidence in the complex, interlocked and cumulative way that all Leonardo’s paintings require. In recognising a work as by Leonardo we have the inestimable advantage that we can adduce multivalent factors from his art, theory and science. The disadvantage of this complexity is that if one factor can be picked off (convincingly or not), it can be used to taint the overall argument.

A good example is the silly dispute about the optics of the sphere that Christ holds in the palm of his hand, which I have argued is composed of rock crystal. There has been more than one “scientific” attempt to prove it is not rock crystal. These proofs rely on what we would see if a model were to pose in front of us actually holding an orb. However, Leonardo was not providing a photograph or computer-generated reconstruction of an existing sphere. Rather he is using his expertise in semi-precious minerals to imagine what such a crystal sphere would look like, with its glistening gaps or “inclusions”. He is alluding to the crystalline sphere of the fixed stars, then seen as the outer limit of the finite cosmos. Christ, like his Father, is shown to be standing outside the limits of the material world.

Overarching all the Leonardesque factors that my co-authors and I explore in our recent Oxford University Press book, Leonardo da Vinci’s Salvator Mundi and the Collecting of Leonardo at the Stuart Courts, is the extraordinary presence that characterises all his paintings. It has a “living” property that uses the magic suggestiveness of Leonardo’s handling of oil paint to conjure up the physical and optical existence of Christ as a man – at the same time as the Saviour’s spiritual majesty eludes precise definition.

Leonardo exploits his layered technique of fine glazes of colour to create forms devoid of linear boundaries. This is a method of painting, but it also carries wholly integrated psychological, theological and scientific dimensions in a way that only Leonardo succeeded in doing. It is psychological in its elusive suggestiveness. It is theological, in keeping with his conviction that the infinite nature of God is out of reach of our finite mind. It is scientific in that Leonardo’s researches into human vision showed that the eye is a very complex instrument in which certainty is overtaken by ambiguity.

In our book we have set out these and other accumulative factors as carefully as we could. If we are mistaken in whole or in part, so be it. But so far, I have seen nothing to justify our wearing sackcloth and ashes for characterising the Salvator as a Leonardo.

The double loss is to be greatly regretted. My hope is that after the fevered pace of Leonardo’s 500th anniversary year, some sort of measured sanity might prevail. However, the experiences I recounted in my earlier book Living with Leonardo suggest otherwise.

• Martin Kemp is author of Living with Leonardo, Fifty Years of Sanity and Insanity in the Art World and Beyond (Thames and Hudson), and co-author with Robert Simon and Margaret Dalivalle of Leonardo da Vinci’s Salvator Mundi and the Collecting of Leonardo in the Stuart Courts (Oxford University Press)