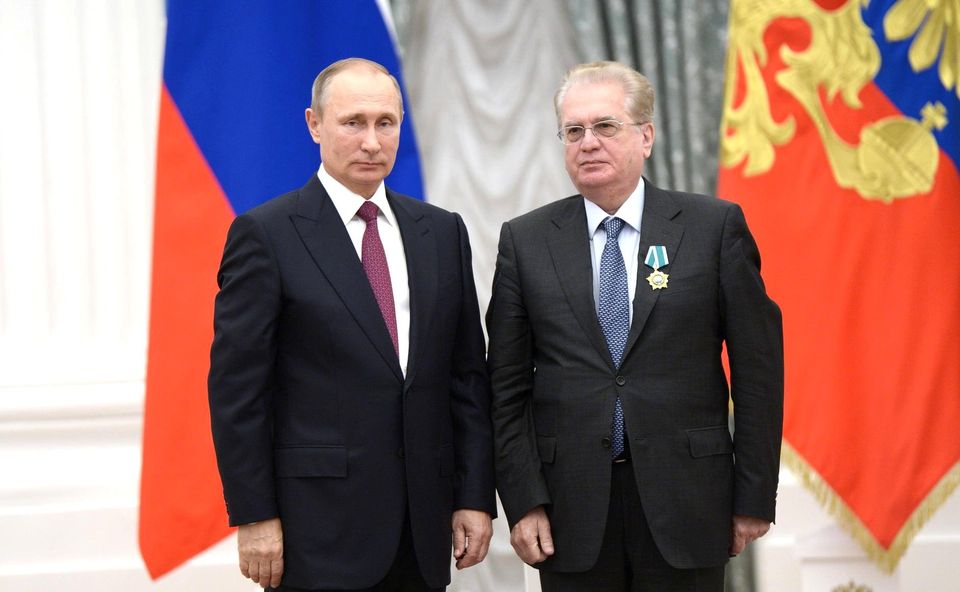 Mikhail Piotrovsky, the director of the State Hermitage Museum, is awarded the Order of Friendship by President Vladimir Putin in 2016 courtesy The Kremlin

At the opening of the State Hermitage Museum’s Piero della Francesca exhibition earlier this month, its director of 26 years, Mikhail Piotrovsky, hailed the event as a landmark in Italian-Russian cultural relations and a singular curatorial feat that only the mighty Hermitage could pull off. The museum overcame formidable political, legal and bureaucratic barriers “with the will of God”, Piotrovsky said.

However, he did not mention the acrimonious collapse of negotiations for the star loan—Piero’s altarpiece of the Madonna della Misericordia from Sansepolcro—despite reputed offers of a six-figure sum and the loan of a Leonardo da Vinci painting. Two fresco fragments from the small Tuscan town provided some consolation, and the potential gap was filled at the eleventh hour by an Annunciation from the apex of the Sant’Antonio polyptych in the Galleria Nazionale dell’Umbria.

So why go to all the effort? Piero is a favourite of Piotrovsky, but more importantly, the exhibition marks “a new period of life in the Hermitage”, he says, founded on the twin pillars of “very strong cultural relations” and the museum’s “most prestigious” reputation. Piotrovsky is pursuing global expansion through exhibitions, cultural exchange and a series of outposts.

He likens the model to the Soviet Sputnik space exploration programme: a mobile cosmic system with satellites in different orbits. Two seven-year agreements with London (2000-2007) and Las Vegas (2001-2008) were initial “missions accomplished”. The Hermitage Amsterdam, opened in 2009, is “a cosmic station”, and ambitious long-term plans are under way for Barcelona and China, as well as a string of regional Russian outposts.

Piotrovsky views culture primarily as a bridge, which is why he attended the controversial “Davos in the desert” conference in Riyadh in October amid questions over the Saudi government’s role in the murder of the journalist Jamal Khashoggi. “The last bridge to be blown up should be a cultural one,” Piotrovsky states emphatically.

While the Piero exhibition embodies this “formula of goodwill”, even the Hermitage could not bridge the current cooling in US-Russia relations. The exhibition reunites three of the four dispersed side panels from Piero’s altarpiece for the Augustinian convent of Sansepolcro, but was unable to secure the last from New York’s Frick Collection. As we went to press, the arrival of a small Madonna from a US private collection was still to be confirmed. “It is a tragedy about the US,” Piotrovsky says. “We can’t live if we forget about each other.”