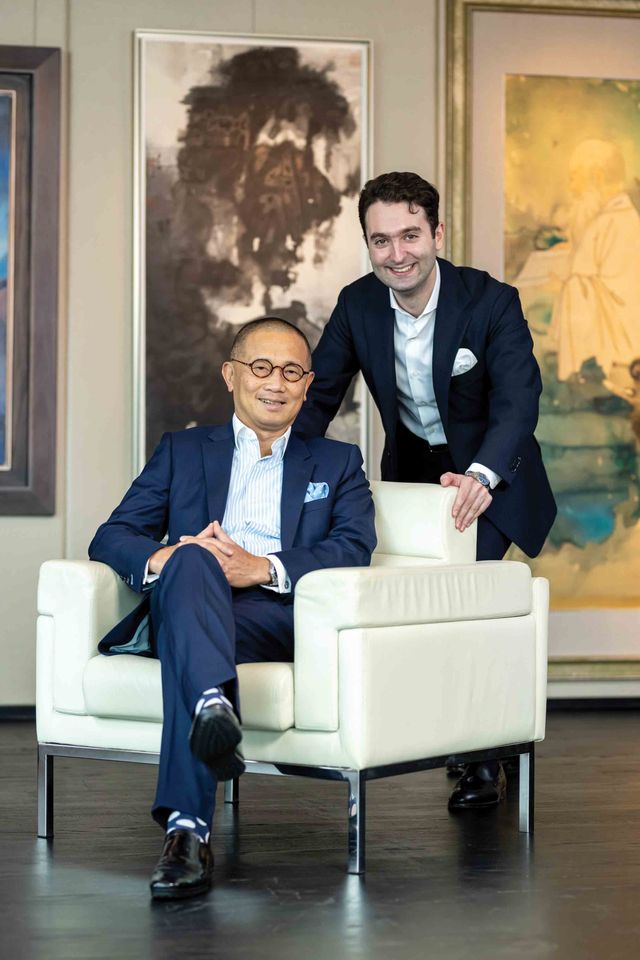 Kevin Ching with Nathan Drahi, 26, who replaces Ching as head of Asia at Sotheby's Courtesy of Sotheby's

I’m beginning to feel old. For the record, I am in the "not-yet-fully-vaccinated" category, but I am seemingly way ahead in the queue compared to most of the people now dominating the art market. It’s not exclusively the NFT brigade, although their youthful exuberance is beginning to grate. Last month, I asked one recently anointed expert (over Zoom, ofc), “Where are you calling from?”—small talk that can make for marginally interesting copy. “I’m a bit of a tech nomad,” he replied.

Okay. I get it. I’m putting you in one of my Generation X pigeon holes, which also includes tangible objects and annoying artistic boundaries such as “Impressionist” and “Modern”. This is not today’s world. We are about 20th- and 21st-century art, Christie’s has decided, and even those boundaries aren’t actual boundaries, given that Basquiat—who died in 1988—is categorised as a 21st-century artist. Just go with the flow.

Noah Davis, Christie’s head of cryptoart—who was partly responsible for improbably making Beeple a household name—is in his early thirties. His counterpart at Sotheby’s, Max Moore, is 27—and now moving to Hong Kong to become head of contemporary art sales in Asia. There are (happily) girls as well as boys in the new world order. Christiana Ine-Kimba Boyle, Pace Gallery’s recently appointed first online sales director, is in her mid-twenties.

It makes a lot of sense. Understanding the relevance to digital art of gaming virtual realities, cultural “drops” and blockchain must benefit from a native, probably nomadic, mindset. As Davis recently said on an online panel, “An interviewer asked me to explain NFTs to him as if he was a child… And I thought, if you were a child, you would already get it.”

Ideally, the Fortnite knowledge should be combined with a bit of context and a dose of sense, but we can save that for when these items stop selling for eight-figure sums (probably already, but shhh).

Then there’s Nathan Drahi, who has made me feel ancient. He is just 26 and, since May, has been in charge of Sotheby’s Asia, replacing Kevin Ching who is retiring after 15 years as chief executive of the auction house in the region. It is a position of serious responsibility. Since his dad, Patrick Drahi, bought the auction house in 2019, Asia increasingly looks like the future of the art market and, even in the present, already accounts for more than a quarter of Sotheby’s annual auction sales. There are other youngsters at helms at the moment: Vogue China recently appointed 27-year-old Margaret Zhang as editor while, also this year, Alexandre Arnault, the 28-year-old son of LVMH’s owner-chairman, was hired to an executive position at Tiffany & Co.

So who am I to say that a 26-year-old called Drahi isn’t the best person for the job? He has some experience from within Sotheby’s in Hong Kong, having come in as its commercial officer last year. His previous experience outside of the art world—at JP Morgan investment bank and the private equity group BC Partners—will bring some fresh eyes to an old business at a crunchy time. Auction houses have also long been classic Old Boys’ Networks, where friends and family get helpful lifts. It just seems to me the most un-nomadic decision of the year to look no further than your own children.