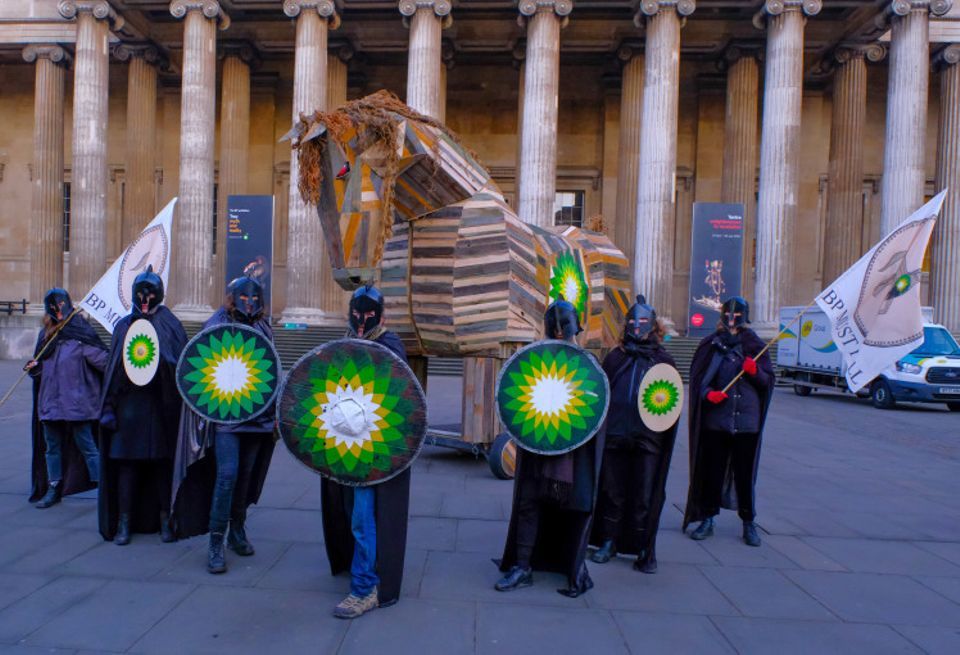 The British Museum’s response to February’s protests at the museum by the activist group BP or not BP? was largely creditable. The protesters, targeting the museum’s ongoing association with oil company BP, the sponsor of its Troy exhibition (closed 8 March), were allowed to stay after hours, to bring a Trojan horse into the museum and to create Monument, an art work that involved casting their own body parts and laying them out in the Great Court.

Yet the museum’s director, Hartwig Fischer, displayed an enduring failure to grasp the significance of their activities. In a statement, he acknowledged the protesters’ right to free expression, but soon resorted to platitudes about the “challenges that we all face together” on climate change, before moving on to the importance of sponsorship for the museum’s exhibitions and public programming. “Removing this opportunity from the public,” he concluded, “is not a contribution to solving the climate crisis.”

This is absurd obfuscation. Fischer’s head is in the sand: he knows well that all sponsorships are not equal, that these protests are against a company that has failed to address the climate-crisis challenges he speaks of. BP has consistently undermined climate science, lobbied against environmental regulation and remains 97% invested in fossil fuels despite the introduction of the catchy Beyond Petroleum slogan in 2000. Even in February, when BP announced plans to reduce carbon emissions to net zero by 2050, it gave scant details, and put off further announcements until September. It’s not as if it’s urgent, after all.

Sponsorship makes museum directors mouthpieces for their funders. In evoking challenges we all face, Fischer draws a false equivalence between ordinary people’s environmental responsibilities and those of the major carbon emitters.

The same parroting of oil and gas companies’ “key messages” came when Ian Blatchford, the director of the Science Museum Group, suggested in an email to staff about ongoing sponsorships that the companies “have the capital, geography, people and logistics to find the solutions” to climate change—despite overwhelming evidence of their sustained reluctance to do so. Blatchford even disparaged the Tate’s declaration of a climate emergency.

So when he announced last month details of the Science Museum’s climate change-related programming in 2020, and stated there is “no more pressing issue facing the world”, his words rang hollow.

Blatchford told the Financial Times he wrote that staff email because: “Some of my junior colleagues were thinking that we would simply accept money from anyone and weren’t asking any tough questions.” Ah, those pesky young people querying a public museum’s association with the world’s major polluters! Blatchford’s tone, and the need for him to write the email, suggests there are gulfs between senior directors and their staff on this issue.

Notably, Public and Commercial Services (PCS) union members at the British Museum supported the protesters’ call to drop BP sponsorship, publicly disputing Fischer’s suggestion that BP funding was essential to the museum. “In fact, we cannot afford to accept it,” the PCS statement said.

It’s not just staff, but dozens of major stakeholders in our museums—leading scientists in the case of the Science Museum, leading artists and writers in the case of various art and heritage museums—who want fossil-fuel support to end. The Royal Shakespeare Company, the Scottish National Portrait Gallery, the Southbank Centre and others have recognised they can no longer accept that money and still look their audiences in the eye. Fischer and Blatchford look dangerously out of touch with the public they serve.

• For a discussion about fossil-fuel companies' sponsorship of the arts, listen to our podcast Troy: the show and the problem with BP sponsorship