With the Taliban’s take-over of Afghanistan, it is the diversity of intangible cultural heritage that is most at threat

The music, poetry, traditions and crafts that are kept alive by communities are especially vulnerable under the group’s ultra-conservative rule and the economic chaos of continuing conflict The Taliban are back in Bamiyan, the very place where they undertook one of the 21st century’s most shocking displays of cultural destruction, raising new concerns about the future of Afghanistan’s past.

It is estimated that over the past three decades, the Afghan National Museum lost about 80% of its archaeological and ethnographic collection to looting. Ghaznavid shrines have been blown up and most, if not all, of the famous archaeological sites of Afghanistan—Ai Khanoum, Balkh, Jam and its minaret, Mes Aynak—all have fallen foul to various degrees of looting and pillage.

However, while the videos and pictures of the dynamited Bamiyan buddhas and pillaged sites have become a symbol of the importance of cultural heritage for local and global communities, and while there are, today, clear and justified concerns about the future of some of the country’s famous monuments and archaeological sites, a possibly greater destruction, untold and unseen, is also under way. The destruction of Afghanistan’s intangible heritage diversity.

Intangible cultural heritage (ICH) is composed of practices that people and communities transmit across time. It is dances and songs, crafts and culinary practices, rituals and traditions. As such, it is inherently connected to the well-being of the community and the individuals that comprise it. It is also particularly sensitive to any societal upheavals. Some practices are on the verge of disappearing completely: the Whistle Language in Greece or Turkey, khatam kari veneer technique in Afghanistan. ICH disappears as a result of shifting cultural trends, lack of economic viability, but also conscious, pro-active efforts to erase particular aspects of one’s culture. Yet, not only is ICH an important source of economic revenue and education, it is also, crucially, a record of a community’s identity and history. As such, it is essential that they are recorded, supported, and protected.

Afghanistan’s ICH is as rich and diverse as it is unprotected. From millennial-old folktales and songs, transferring moral teachings from one generation to the next, to the meticulous construction of jaali carved latticework reminiscent of the Arabic mashrabiyah, from the recitation of a ghazal poem accompanied by the Afghan rubab, a stringed instrument exclusively made with the wood of the Afghan Shahtut mulberry tree, to the Nowruz festivities held every year at the Hazrat ‘Ali shrine in Mazar-e Sharif, the country is brought together by its knowledge and its practice of traditions, which infuse the contemporary daily lives of its people. 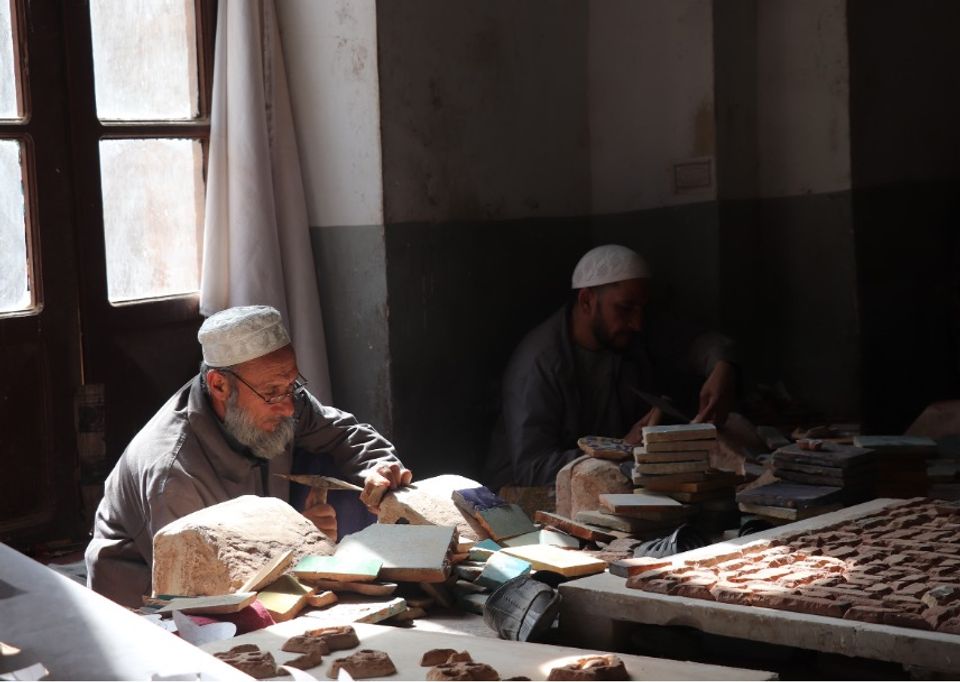 From 1996 to 2001, Afghanistan was ruled by the Taliban, who sought to build a new moral and cultural narrative. While they are in no way responsible for the totality of the heritage destruction that has taken place in the country, their iconoclastic urges and ultra-conservative rulings, alongside general displacement of the population and economic disarray, have deeply impacted Afghan ICH.

Some practices have been directly damaged by the weakening of the country’s economy, and the disruption of supply and value chains. This is particularly the case for traditional crafts, such as classical woodcarving, coppersmithing, or calligraphy. This has led master artisans such as Ustad Abdul Hadi, once a woodcarver for the royal family of Afghanistan who specialised in the highly intricate techniques of Nuristani carving, to sell shoes in the Kabul bazaar. Many artisans have similarly given up their practice and to pick up a new, more viable activity. They do not transmit their craft to the next generation and thus the practice dies out.

Other practices were banned entirely, impacting communities across the country, such as the making of instruments or traditional celebrations. For instance, with the proscription of Nowruz, the Persian New Year, the Taliban have attempted to destroy a millennial ritual at the core of Afghan identity. Every year, Nowruz represents an opportunity for families to gather and celebrate, sharing pastries and the traditional seven-fruit dish. In Mazar-I Sharif, communities from throughout Afghanistan gather to celebrate at the shrine of Hazrat ‘Ali, where the city’s Coppersmith Guild brings everyone together to clean the site’s quba (cupolas). In the lead-up to the event, the city’s poorest are fed, while worshipers visit the workshop and place wishes on the normally untouchable quba. Banning Nowruz went beyond forbidding the celebration of a past religion, it was used as a coercive measure to break apart the social fabric of Afghan society. This, more than the loss of a carved wooden object or a delicious pastry, is the true cost the Taliban is inflicting on Afghanistan’s cultural heritage. 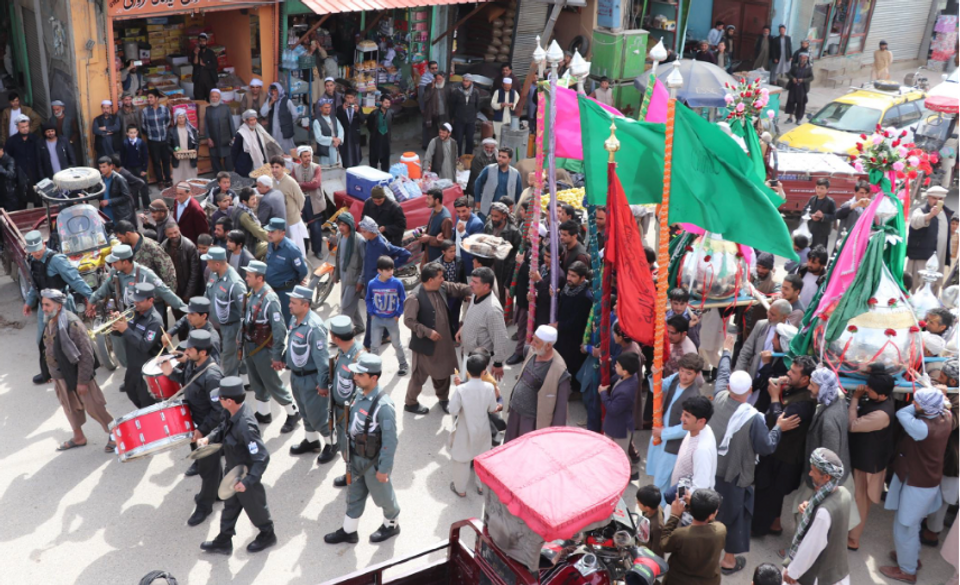 A procession takes the quba back to the Hazrat ‘Ali shrine just days before Nowruz, Persian New Year Photo: Bastien Varoutsikos and team, 2020

In a perhaps quixotic attempt to find some glimmer of hope in the current situation, one might say that the heritage community in Afghanistan is much stronger now than it was 30 years ago. Thanks to two decades of collaborations between Afghan archaeologists and international experts, the Ministry of Information and Culture, the Afghan National Museum, as well as local and international organisations, have helped strengthen the country’s archaeological and architectural inventory, the monitoring of excavations, the restorations of heritage sites, and the documentation of intangible heritage. These programmes have contributed to the preservation of Afghanistan’s diverse and ample cultural heritage. This work will be central in the months and years to come in protecting the country’s identity and building a cohesive narrative.

But this support needs to continue. In Afghanistan and abroad, intangible cultural heritage is maintained by communities, and it evolves and adapts with them. National and international organisations must not give up on practices that make up the last elements of identity to those who lost all. Across the diaspora, in refugee camps, and even throughout Afghanistan itself, more not less needs to be done to keep Afghan traditions alive.