Are art awards really worth winning?

Winning a prize can give an artist international exposure, but the question of who really benefits—critically and commercially—is an increasingly vexed one

Prize-winners and nominees pepper the Basel landscape this year, but do their predominantly national accolades count for much on the international market?

The Turner Prize, for example, which was established in 1984 by the Tate, recognises UK-based artists who have had an outstanding display of work during the previous 12 months. The 30-year-old New Zealander Luke Willis Thompson, the youngest nominee this year, has a show at the Kunsthalle Basel (until 19 August), and Lubaina Himid—who became the oldest ever winner of the Turner Prize last year, aged 63—has a solo presentation in Art Basel’s Feature section, with London’s Hollybush Gardens gallery. 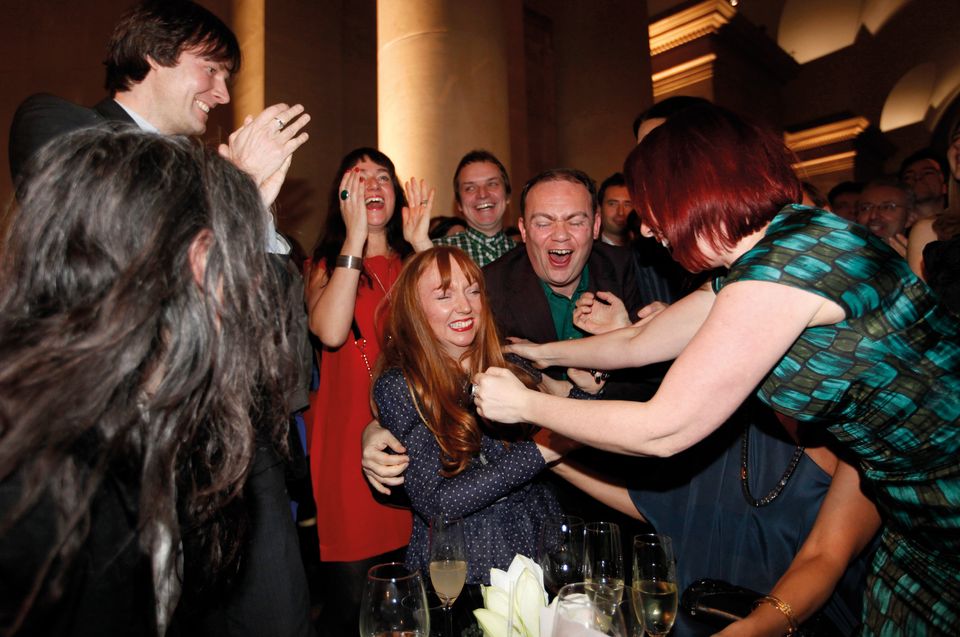 Glasgow-born artist Susan Philipsz is congratulated by friends and family after hearing the announcement that she has won the Turner Prize 2010, at the Tate Britain gallery, in London REUTERS/Andrew Winning

“Even before her win, there was quite keen market interest,” says Lisa Panting, the co-director of the gallery, which has represented Himid since 2013. “Prices for her work have increased, but not hugely; they have not doubled, although we may have been conservative on that front [in keeping prices deliberately low].”

The gallery is showing works from Himid’s Negative Positives: the Guardian Series (2007-16), in which the eponymous UK newspaper acts as a canvas. Prices start at £12,000. Works from the 2017 series known as Men in Drawers begin at £30,000.

Panting says that collectors outside the UK are familiar with the Turner Prize and the way in which it bestows legitimacy on artists, both critically and commercially. Candace Worth, a New York-based art adviser, confirms this view. The prize is “prestigious”, she says, and on the radar of “collectors who care”.

Prizes are important, but the determining factor is the strength of the work

The Middle Eastern financier Mohammed Afkhami says: “It is important because… a recognised and prestigious award… vindicates your decision. [But] it is not the determining factor, which in my view is the aesthetic strength of the work.”

The UK collector Christian Levett is of like mind, saying that “it definitely adds to the provenance of an artist to have won the Turner Prize or represented a country at the Venice Biennale”. However, the work itself—its date, quality and exhibition and publication history—outweighs any related awards, he adds.

Worth states that the Tate’s decision last year to abolish its previous age limit of 49 chimes with recent trends. “It makes sense at a time when the market is acknowledging the significance of overlooked, mid-career artists,” she says. Worth equates the Turner Prize with the annual MacArthur Fellows Program, which offers “genius grants” to American and US-based cultural figures, and the $100,000 Hugo Boss Prize, administered by the New York-based Solomon R. Guggenheim Foundation. Frances Stark, who is showing a painting installation in Art Unlimited, called The Outsized Series: So that part of a part of a reader can partially assimilate part of a part of a book (2018), has been nominated for the Hugo Boss award this year.

Artists who were involved in the Turner Prize in its early years, however, are often a mere footnote in the competition’s history. The late UK sculptor Helen Chadwick was one of the first women to be nominated, in 1987. Richard Saltoun’s London-based gallery is showing a series of works by Chadwick in Feature at Art Basel—but do collectors know about her nomination? “I doubt it,” Saltoun says. “I doubt the Basel audience will be aware of Helen Chadwick.”

Nevertheless, the gallery is presenting some higher-priced works by the artist, with two pieces from Piss Flowers (1991-92) and Wreaths to Pleasure (1992-93) available for around $250,000 and $350,000. Smaller works are priced from $2,000. Saltoun is one of 16 first-time exhibitors—many of them emerging and mid-sized galleries—at the fair.

A recent controversy has raised the question of whether prizes are in fact lucrative for artists. The Berlin Nationalgalerie prize, which takes the form of a solo exhibition at the Hamburger Bahnhof museum and an accompanying publication, was mired in controversy last year, when the four artists shortlisted said that they should be paid for the exhibition they were required to put together. 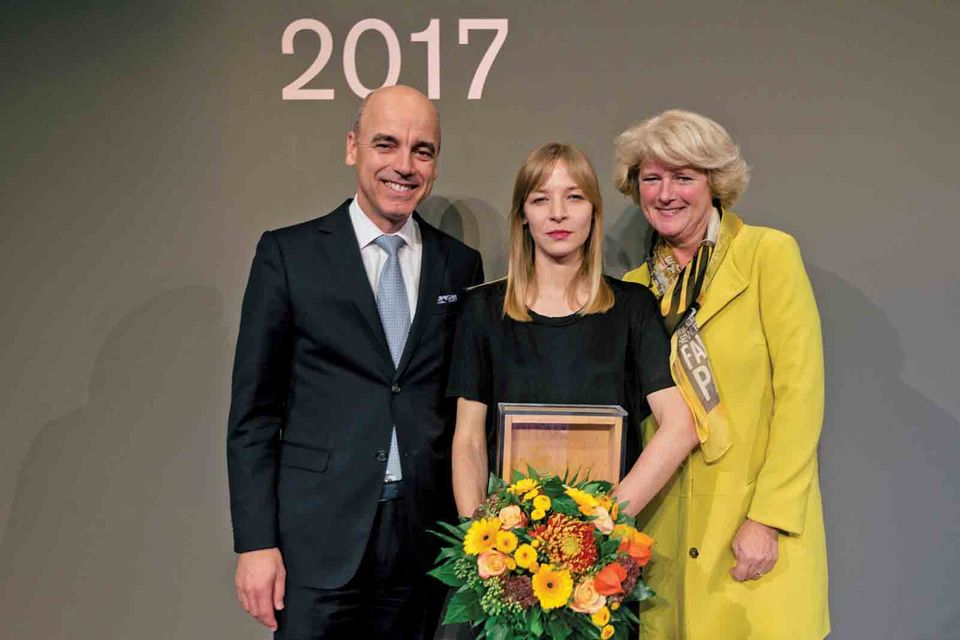 Agnieszka Polska (centre) is awarded the 2017 Berlin Nationalgalerie prize; she said she should have been paid for the work involved Offenblen.de (10/2017)

The prize was awarded to Agnieszka Polska by the German culture minister, Monika Grütters, in late October; the three other finalists were Jumana Manna, Iman Issa and Sol Calero. All four artists are female, and they were all born outside Germany. “There is an unspoken assumption that the participants are likely to be remunerated by the market as a result of being nominated for or winning the prize,” the artists said. “We know that this is not always the case. The logic of artists working for exposure feeds directly into the normalisation of the unregulated pay structures ubiquitous in the art field.”

The four artists also expressed their concern about the public focus on their gender and national origin—and another gender row shook the art world in Belgium when the five nominees for the 2019 Belgian Art Prize withdrew. The move came after more than 800 people, including the independent curator Katerina Gregos, signed an open letter condemning the “exclusionary shortlist” drawn up by seven judges including Sophie Lauwers, the head of exhibitions at Bozar in Brussels.

The row centred on the all-male shortlist of Sven Augustijnen, Koenraad Dedobbeleer, Gabriel Kuri and the duo of Jos de Gruyter & Harald Thys. “The flagrant exclusivity of this year’s candidates and the prize’s denial of not only social but also aesthetic reality, gender being just one of its glaring discriminatory categories, does not represent how we see ourselves, or our community,” the signatories say.

The nominees hit back, saying that “the all-too-rapid shift of public attention from artistic discourse or content—let alone merit—towards white male privilege is frankly something that we regret”. Consequently, the organiser of the prize, the non-profit body La Jeune Peinture Belge, decided not to award it in 2019. “[We] regret that the [nominated] artists are unable to work serenely due to the current pressure of a social debate that does not target them directly, but of which they are nonetheless the victims,” its representatives said in a statement. 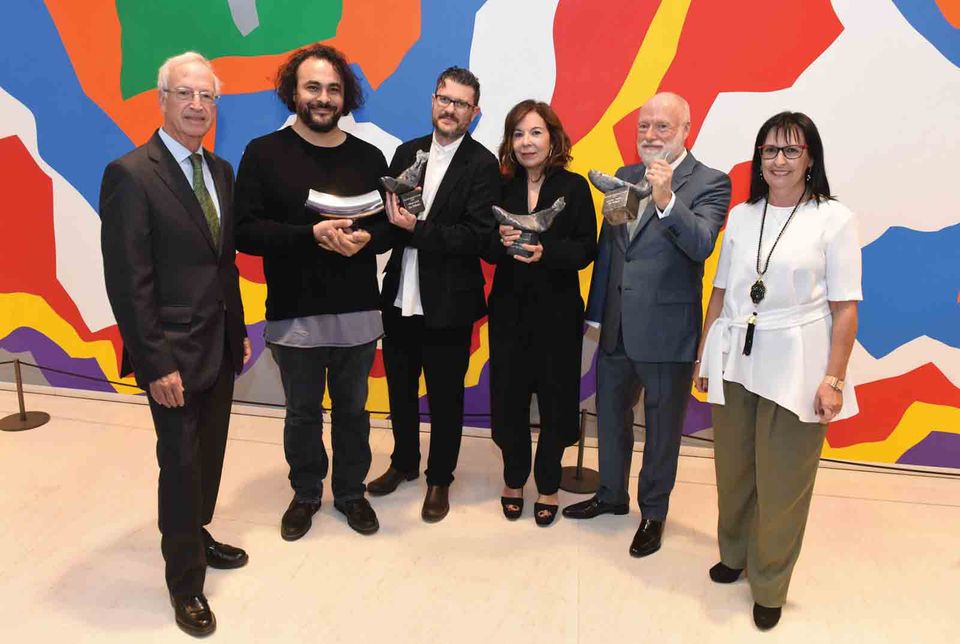 “Prizes are welcome for an artist, especially for someone like me, who is radical and very critical politically,” Attia says. “I got the Duchamp prize the day after opening La Colonie [Attia’s space in Paris for art and cultural activism]. I was surprised; I thought the launch could have put off the grand jury. The win did not change me personally. What is important is never giving up your radicalism.” 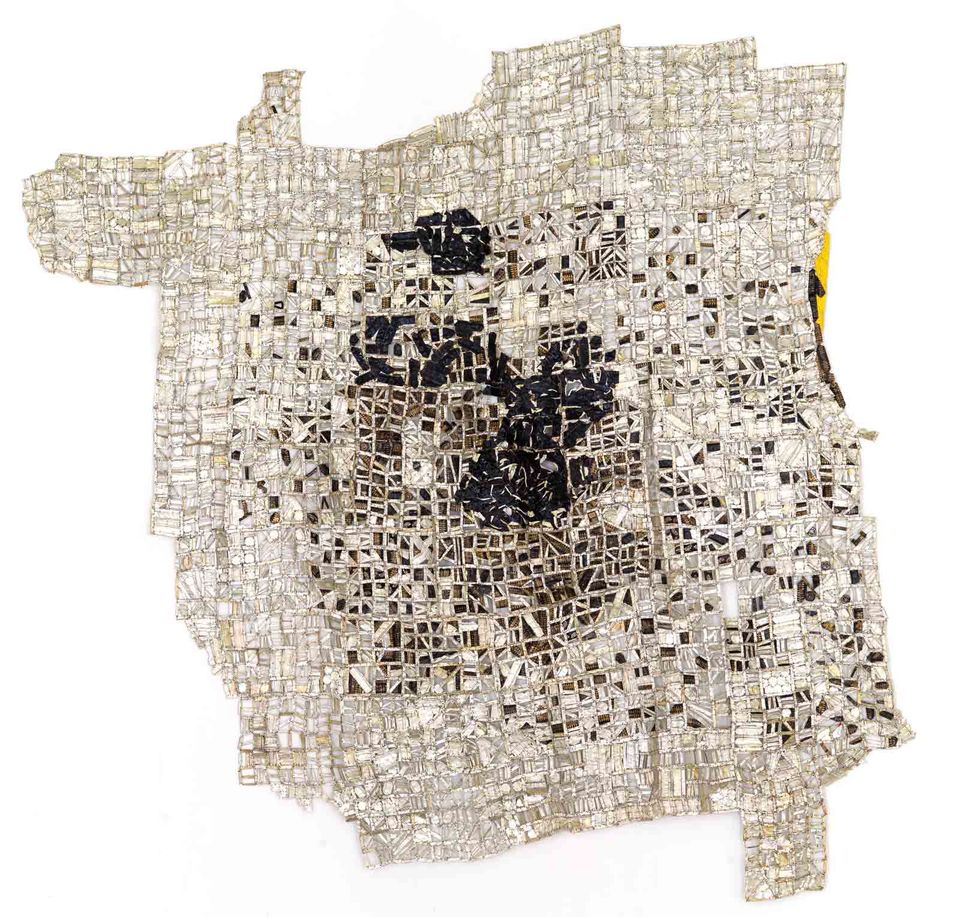 Tse (2016), made from bottle caps by the award-winning Ghanaian artist El Anatsui, is priced at $1.1m with Goodman Gallery at Art Basel this year

PRIZE-WINNERS AT BASEL THIS YEAR

There are plenty of works by award-winners on show at the fair this year—a sign that prizes have a certain cachet. The French artist Laurent Grasso, who won the Prix Duchamp in 2008, says: “Such a prize is always good news. Indeed, ten years later, it is still interesting and a topic [of discussion].” The win continues to boost his profile; Grasso’s work is currently in a special Prix Marcel Duchamp exhibition in China (Bridging the Gap, featuring a selection of nominees, is at the Tsinghua University Art Museum, Beijing, until 17 June). At Art Basel, Grasso is showing new paintings related to his film project OttO (2018), with New York’s Sean Kelly Gallery.

Liza Essers, the director of the Goodman Gallery in Johannesburg, says that awards can have a positive effect at fairs. “Two of our artists—Kiluanji Kia Henda and Kapwani Kiwanga—received the most recent Frieze awards, which had a noticeable knock-on effect in terms of drumming up more pointed interest from collectors and museum curators who came to our stands at Frieze,” she says. Hank Willis Thomas, who won a Guggenheim Fellowship for photography this year, has expanded his already enthusiastic collector base, particularly at art fairs, she adds.

One of the biggest winners appears to be the Ghanaian artist El Anatsui. His work on Goodman’s stand at Basel, entitled Tse (2016) and made from bottle caps, is priced at $1.1m. “On the eve of El Anatsui’s first exhibition in Africa of his metallic tapestries, held at the Goodman Gallery last year, he won the Praemium Imperiale award for sculpture. This did not go unnoticed by prominent South African collectors,” Essers says. Jack Shainman gallery of New York is also showing works by El Anatsui at Art Basel.