In the Presents section, galleries founded within the past ten years present solo or dual-artist shows. Here are some works to look out for this year The Ghanaian artist Kwesi Botchway creates spirited portraits of Black figures of all generations and walks of life, engaging in activities like dancing and celebrating a birthday, or posed in comfortable confidence. “I don’t want to just produce realistic work but works that speak loud and can prompt dialogue,” the artist says in a statement. “My focus is to be more conceptual, focusing on the language of colour. I want to elevate Blackness and also what Black truly represents.” Many of the works on show at the Armory were created during a residency at Gallery 1957’s space in Accra, while the artist was under lockdown restrictions during the pandemic, and reflect on “an unprecedented moment of both sensitivity and survival”, the gallery says. The Nigerian art space Rele Gallery, with locations in Lagos and Los Angeles, is showing a series of paintings by Chidinma Nnoli. Born in 1998, Nnoli often uses her work to explore notions of identity and the cultural conditioning of women, particularly in her native Nigeria. On view are six new oil and acrylic paintings from the artist’s ongoing series, A Poetry of Discarded Feelings. In each work, a modestly dressed female figure sits in the foreground while a nude woman reclines in the background—an art historical allusion as well as one that nods at the dual and often conflicting roles for women predetermined by society. Jennifer Rochlin at The Pit

The artist-run gallery The Pit—based in Los Angeles and Palm Springs—is hosting a solo show of 15 new works by LA-based ceramicist Jennifer Rochlin. Trained as a painter, Rochlin began working with clay in 2007, and is now known primarily for her ceramic vessels. These works typically depict moments and symbols of personal significance to the artist. Past pots have included imagery of plants and wildlife native to Southern California, while others have featured pop culture icons such as Wonder Woman and art historical references. Jessie Makinson’s works, presented by the New York gallery Lyles & King, challenge the conventions of “the museum” by commenting on the way that art institutions, purposely or not, endorse cultural appropriation and a colonialist perspective. The British artist’s paintings present narratives that explode from flat surfaces in the form of ceramic “artefacts” and encourage meditation on what it means to see and be seen: in some works, figures inspect one another through windows and archways, while others stare out, accusingly, at the fairgoer. Viewers are caught between the worlds of the concrete and the fictive, the gallery suggests, and are given an opportunity to abandon the notion that the two are distinct. 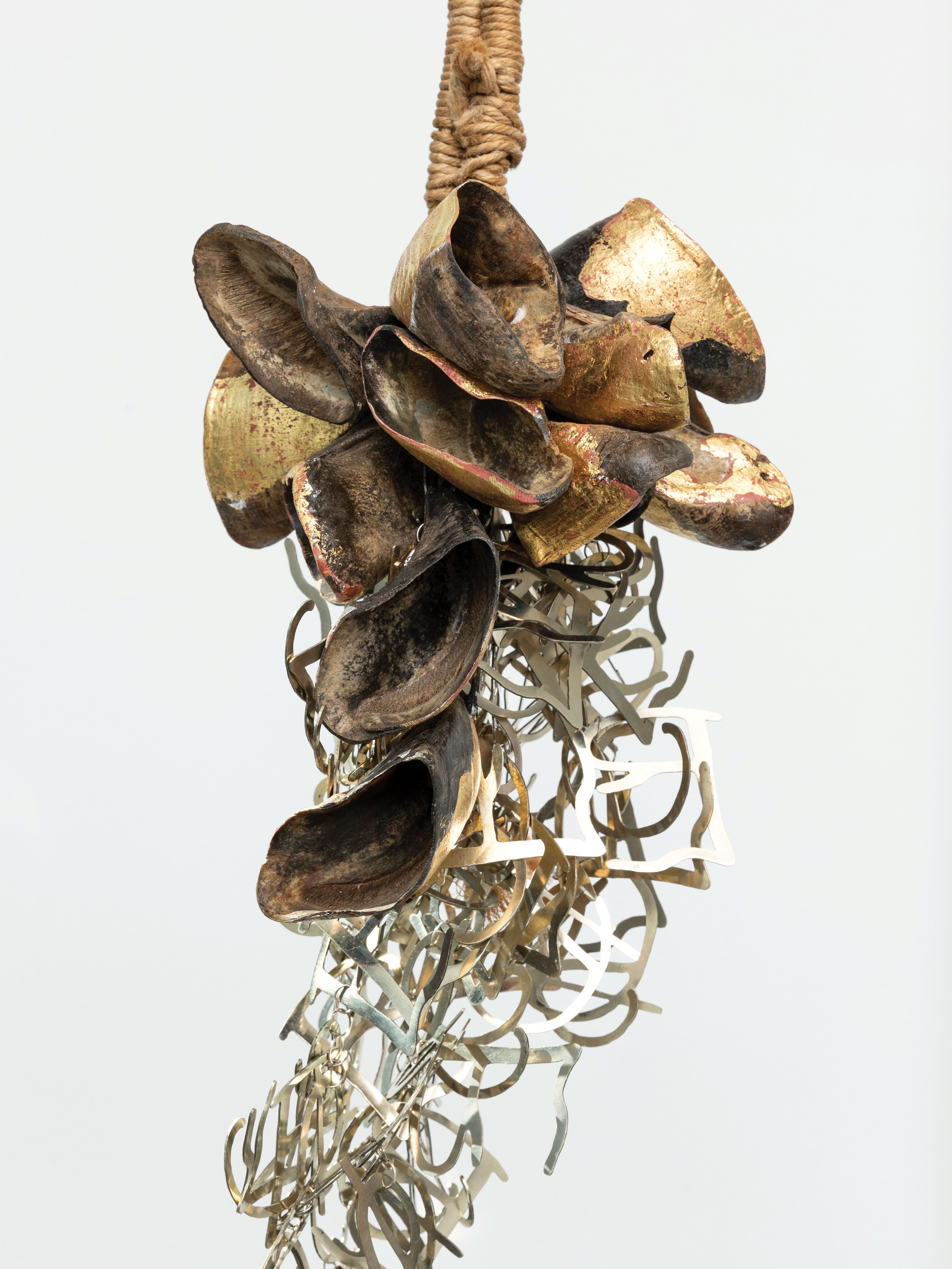 The Chicago gallery Patron is showcasing works by Kaveri Raina and Noé Martínez (above) that delve into issues of identity as shaped by complex historical and cultural factors. Raina, who was born in New Delhi and later moved to Ohio, paints images on burlap that summon memories of her childhood in India. Martínez, who lives in Mexico City and is a descendant of the Indigenous Huastec people, works with a range of materials such as cow hooves, gold leaf and rope, exploring a heritage of colonial oppression. Tif Sigfrids is presenting two striking large-scale paintings and a series of small works by the Los Angeles-based painter Gracie DeVito, the daughter of the actors Danny DeVito and Rhea Perlman. “Gracie’s paintings are grounded in a variety of historical traditions, including Impressionism and post-war European Abstraction,” Sigfrids says. “I would describe her process as intuitive.” DeVito graduated from the California Institute of the Arts, focused on performance, while taking classes at the New York Studio School, where she practiced traditional painting methods. “There is an interesting correlation between these two modes of output in the work,” Sigfrids adds. London gallery Tafeta continues its Armory Show tradition of featuring two African artists, one from the continent and one from the diaspora. Nigeria-based Babajide Olatunji’s pictures are from a continuing series of portraits, Tribal Marks III, each of which shows a unique, fictitious member of the modern Nigerian community with traditional tribal face markings. Olatunji’s subtle grasp of three-dimensional shapes breathes life into his imaginary subjects. In the work of Marielle Plaisir (above), a French-Caribbean artist trained in Bordeaux and based in Miami, Black activists who have fought against discrimination are set against beautifully ornate, surreal landscapes presented as backlit lightboxes, elevating their surroundings to parallel their extraordinary lives. Jamil Hellu, After graduating high school in economically disadvantaged Appalachia, Corey Christopher's family expected him to join the US Armed Forces, as it was seen as a pathway to a better life. But homosexuals were not allowed to serve in the military in those days., (2018) Courtesy Rebecca Camacho

The San Francisco-based dealer Rebecca Camacho has assembled a solo presentation by the photographer Jamil Hellu comprising photographs from his Hues project (2017-ongoing), in which the artist collaborates with his subjects on a portrait that embodies the sitter’s history and cultural lineage. “Navigating from a personal lens, Hellu’s practice weaves together photographic imagery, video and installation to amplify queer histories and challenge the social construct of masculinity,” Camacho says. Shrine, an artist-run gallery based in New York’s Lower East Side, has a solo presentation of ten paintings by Hayley Barker. Based in Los Angeles, Barker works in oil paint on linen that she prepares with clear PVA Size, which allows the material’s natural colour to shine through. For the show, the artist has created a wistful series of new works, ranging in size from under four feet to more than eight feet in height, with subjects such as local flowerbeds in her community and depictions of her hometown in Oregon. Los Angeles gallery Saradipour Art (Sarai) presents the show We Keep Reviewing by the Iranian artist Moslem Khezri. As the artist is also a teacher, he is intimately familiar with the atmosphere of school and is able to capture the breadth of emotions that are represented in a single classroom. His use of long, late-afternoon light is outstanding, with elegant streaks of sunlight shining through schoolroom windows at extravagant angles. His pictures bring about a pang of nostalgia, regardless of when, or where, the viewer went to school. 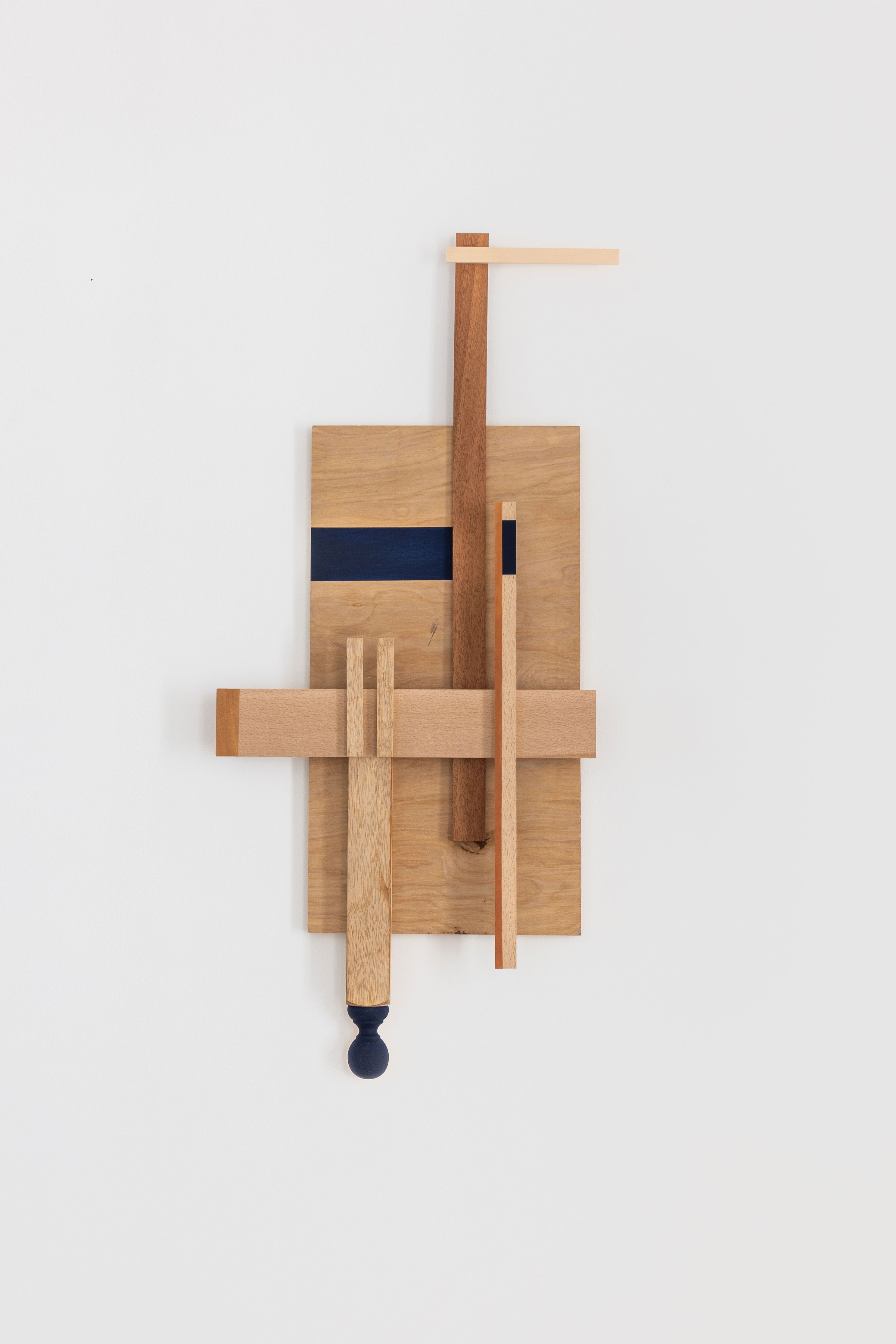 The Emirati artist Sarah Almehairi presents a series of muted wooden sculptures that explore themes around “identity, language, materiality and memory”, says a spokesman for the Dubai-based gallery Carbon 12. Her assemblages “contrast colour against neutral tone, building a rhythmic substance”, he adds. Almehairi, who was born in Abu Dhabi in 1998 and graduated from New York University Dubai, says her work oscillates between narrative and figurative pieces and geometric abstraction. “It’s a balancing act, like identity,” she said in a previous interview. “It is when narrative and abstract are intertwined that playfulness, attentiveness and exploration rise.”

• More news on the Armory Show will appear in our special edition, available at the fair and online next week