After being pushed out by NFTs, machine-made art is making a comeback with London shows ranging from the "world's first ultra-realistic AI robot artist" to the first artificial intelligence ink artist 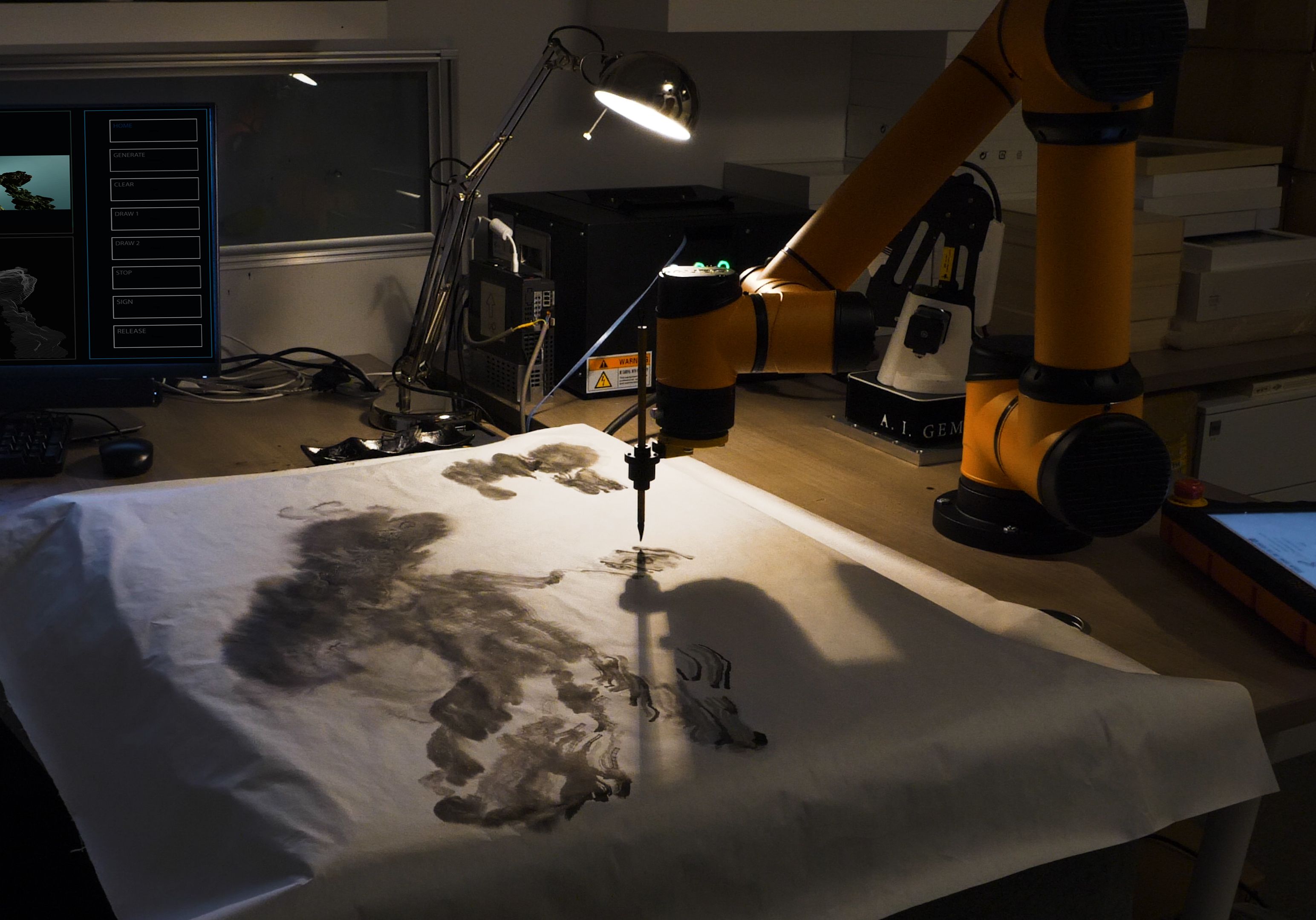 London Gallery Weekend could prove to be a tipping point for art created using artificial intelligence (AI) software. On the back of a growing fascination with machine learning, interest in this technological phenomenon peaked in 2018 when the AI work Portrait of Edmond de Belamy by the French collective Obvious fetched $423,500 (with fees) at Christie’s New York.

Generative art—created with the use of an autonomous system—is nothing new; indeed machine-automated art has fascinated artists since at least the 1970s, though it has struggled to receive market recognition. Nonetheless, “tech-y collectors love AI art, they like the geeky aspect,” says Kate Searles, the director of 3812 gallery in St James’s, which is showing works during London Gallery Weekend by the Hong Kong-based artist Victor Wong, who created A.I. Gemini, the first artificial intelligence ink artist.

A.I. Gemini took three years to build and is programmed to create landscapes inspired by the ancient art form of Chinese ink painting. The works are made by an ink-loaded brush held by a robotic arm; every piece is completely unique. For the Far Side of the Moon series (2019, around £12,800), A.I. Gemini was fed with observation data from Nasa while the Escapism series (2018, around £9,800) is painted in the style of traditional Xieyi works which emerged in the third century. Examples of both will be on show at the gallery. Over at Tabula Rasa gallery in Hoxton, east London the artist known as aaajiao—the virtual persona of the Shanghai-based artist Xu Wenkai— will present Deep Simulator (2020), a multimedia installation which takes the form of a game played by individual participants who sets off on a “metaphorical journey into the depths of space”.

aaajiao also works with AI, having made the piece Typeface (2016), which recreated carved stone rubbings by means of a “deep convolutional generative adversarial network”, he says (this is a form of machine learning, where algorithms independently predict outcomes without explicit programming). “I am more concerned with how people understand their own situation when faced with AI. The anthropomorphic imagination of AI is part of how humans romanticise [the technology],” the artist says. 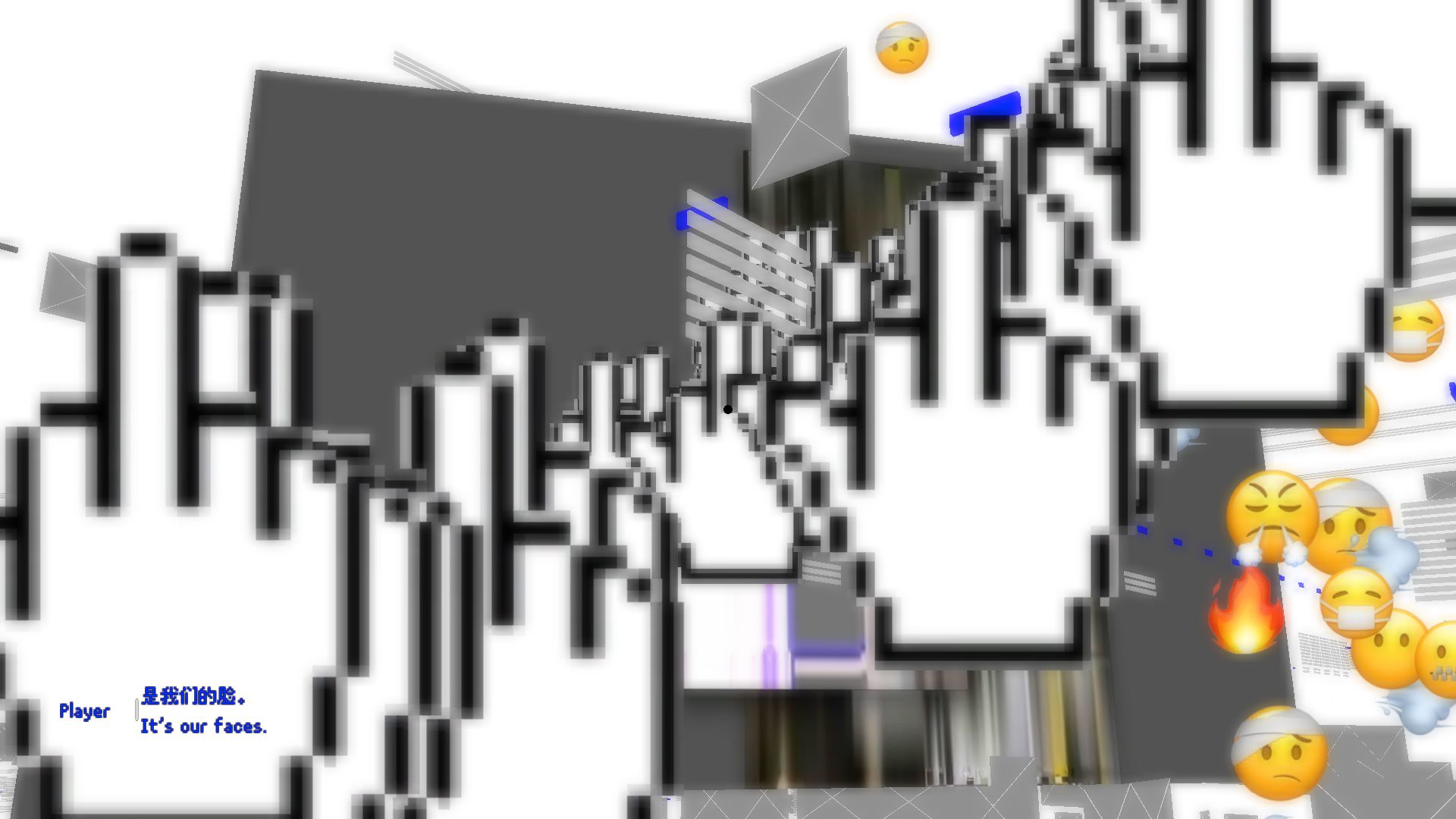 A still from aaajiao, Deep Simulator (2020) Courtesy the artist and Tabula Rasa Gallery

So is the market ready to embrace AI works? aaajiao believes that digital works generally need to be more accessible. “I will not try to cater to collectors, but will make more [user] friendly attempts [to facilitate] how the works are collected, for example I will provide material ways to carry these cyber works [such as] on a USB storage device which contains printed contents [of the digital pieces],” he says.

Finding buyers for AI art is a hard task, however. The Paris-based collector Nicolas Laugero Lasserre recently bought an NFT of another AI piece made by Obvious called Perspettiva Albertiana. The work was sold on the SuperRare platform by the French dealer Kamel Mennour. “I don’t care about the [AI art]market. I have collected for the past 20 years because I love art and support artists I like,” Lasserre says (at the time of writing, the price listed on the selling platform was $23,760).

On the institutional front, the field of AI art gets a major fillip this month with the opening of a show of works at the Design Museum by Ai-Da, billed as “the world’s first ultra-realistic AI robot artist”. Ai-Da draws using cameras in her eyes, employing multiple AI algorithms to process the image which her robotic arm then produces in a physical form, explains her maker Aidan Meller. The show (18 May-29 August) will include two self-portraits in ink and watercolour along with three large mixed media self-portraits.

Even though the market for AI art seems to have waned, the science of artificial intelligence continues to impinge on our daily lives. “This is an important moment for AI art, which is starting to be recognised in the art market. Ai-Da’s works raise questions about whether robots can genuinely be creative,” says Priya Khanchandani, the head of curatorial at the Design Museum. “It is also undeniable that Artificial Intelligence is now embedded in our daily lives and during the pandemic the digital realm has been our main interface with the world. Ai-Da’s unsettling resemblance to being human is a reminder that the way we use technology has a sinister side.”

Meanwhile, 3812 gallery is gearing up to show A.I. Gemini’s AI works during London Gallery Weekend (a show of Wong’s works was last held in the space in 2019; around seven pieces were sold at the time). “The price points are accessible,” Searles says. “The potential drawback of some AI art is that it lacks personality, context or history. But Victor has emotionally invested in A.I. Gemini, they work as a partnership; that human element is still really important.”