As institutions pursue multimillion-dollar expansions, workers feel the squeeze and try to organise

In 2016, The Art Newspaper found that US museums had spent almost $5bn on expansions over the course of seven years while “in a state of constant growth”. Today that trend seems to hold steady: museums continue to expand, raising and spending huge sums of money in the process. But the past year has also seen the rise of a different but related phenomenon: a wave of labour organising and contract disputes at some of those same institutions. For workers, it seems, the high-flying expenditures have thrown low pay into sharp relief.

The most noteworthy example may be the New Museum, which is in the midst of an $85m expansion. Despite the institution’s progressive founding values, its staff have never been unionised—until now. Watching the museum raise millions of dollars for a building project while some salaries were stuck at $35,000, workers voted overwhelmingly in January to organise under the banner of UAW Local 2110. This came after the institution controversially sought advice from an outside firm specialising in “union avoidance”.

The Museum of Modern Art (MoMA) will complete its $400m expansion this fall; last year it was engaged in drawn-out contract negotiations with employees at both its Midtown location (who are also represented by Local 2110) and at PS1 in Long Island City. On the West Coast, the reality of a $305m redesign rallied workers at the San Francisco Museum of Modern Art (SFMoMA) who are organised with OPEIU Local 29. Nat Naylor, a representative for the union, called bargaining with management after the 2016 reopening of the museum “painful… They were trying to seek savings on the cost of reopening on the backs” of the staff members, she says.

The issue isn’t confined to the US. Just after the Vancouver Art Gallery revealed the final design for a new $350m building, almost 200 of its unionised employees went on strike over wages and working conditions. They protested for a week before securing a new contract.

Nor is it exclusive to museums. The contrast between heavy spending and the quest for a living wage is an underlying theme at art fairs, even those known for good labour practices. The Armory Show, for instance, hires unionised carpenters, electricians, longshoremen and other workers to build out the fair. But it’s also a mammoth endeavour that doesn’t control all the work happening under its roof. To install their booths, galleries can bring their own art handlers, who are often freelancers hired for the job. “The industry is so decentralised, it’s really hard for it be unionised,” says a member of the Art Handlers Alliance of New York (AHA-NY), who asked to be identified only by his first name, Ian. He described difficult conditions at many fairs, where art handlers spend long pre-opening days working on-site without heat or food.

“You have this pyramid of inequity that goes all the way from collector down to art handler, where there’s pressure from all different places, and everyone wants everything right away,” he says.

As an advocacy and activist group, AHA-NY is trying to improve working conditions for freelance art handlers. In 2017, it released a bill of rights for organisations to adopt as a certification of fair and safe practices (one business has done so thus far). The next project is the creation of a cooperative, modelled in part on the way the Teamsters Local 814 organises movers. The cooperative would create a pay and benefits structure for art handlers, who would be ranked according to skill level, in part by pooling paychecks and extracting percentages from client contracts.

Not all art handlers are freelancers; some are employed by institutions, where they may be unionised. But even that is no guarantee of stability. At MoMA PS1 in Queens last fall, part-time art handlers and full-time maintenance workers represented by IUOE Local 30 demonstrated to call attention to their plight: Their pay was lower than that of their counterparts at MoMA, and they were negotiating for a raise. 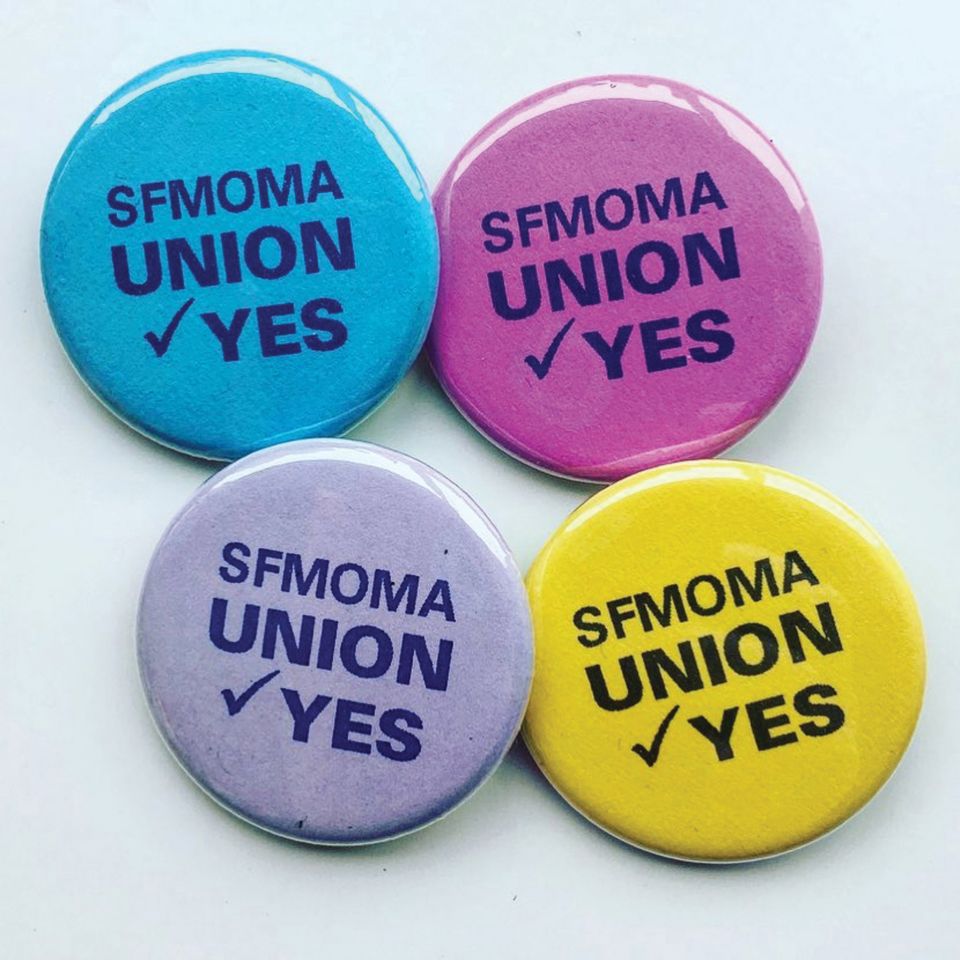 “The wages have been pretty much stagnant for the past decade,” says shop steward and art handler Chris Haag. “One of the reasons we made our campaign public is that we would like to make the situation better city-wide and standardise the industry a little.”

The group settled with the museum on a contract that raises the art handler rate from $30 to $40 an hour over the next five years. That happened in January, just several months after workers at MoMA finalised their own agreements. To win concessions such as raises and better healthcare coverage, employees staged multiple public protests, including one outside MoMA’s Party in a Garden fundraiser.

Other art workers took note, including the New Museum staffers, who were then discussing the possibility of unionisation. “That was definitely not lost on us, in a way that we hope our win will not be lost on other cultural institutions,” says Alicia Graziano, who was until recently an individual giving and membership associate at the New Museum but resigned to work for the union full-time. Graziano says that despite the small size of the institution, there wasn’t a lot of solidarity among staff members before the union drive. “People were very siloed in their departments,” she says. “Conversations among employees weren’t really happening, and in a way people were pitted against each other. When we started having these conversations, it built a sense of solidarity.”

Lucia Love, the co-creator, with OK Fox, of the podcast Art and Labor, thinks “people are realising that politics is within their reach”. “People are getting really tired, and they’re having to work other jobs just to support the fact that they want to make contributions to the cultural sphere,” she says. “It’s pretty shameful that we make it so difficult to do something for our communities.”

Indeed, Naylor noted that some SFMoMA workers in her union—which covers a range of positions, from curators to installers—work second and third jobs to make ends meet. She stressed that many members are struggling to survive in San Francisco, which has one of the most expensive housing markets in the country. “Until the second tech boom, jobs at SFMoMA offered the potential for some semblance of a middle-class existence,” she says. “Our members have really fallen out of the middle class.” For that reason, wage increases were the focal point of the new contract that was finalised at the end of last year.

“There’s always been this massive elephant in the room, where we have a director making nearly one million dollars, and we have staff who qualify for below market-rate housing,” says Naylor. Such wage disparities are found at nearly all art institutions, and as the cost of living has increased tremendously, especially in cities like New York, San Francisco and Vancouver, they have spurred workers to fight back. “People are making money and it’s not trickling down,” says Haag. “We’re fighting literally just to pay rent.”

These issues aren’t unique to art; they’re part of a larger crisis of wealth inequality throughout the country and the world. But they’re perhaps more glaring in a field that’s known primarily for two things: being liberal/progressive and moving large amounts of money. The workers who keep that field going want their due—not just to benefit themselves but to build a sustainable future.

As Graziano says of the New Museum organisers, “We wanted to create a change that would outlast all of us.”

UPDATE: This article was updated on 8 March to reflect that Alicia Graziano has resigned from the New Museum to work for a union full-time.