By using The Art Newspaper website you agree to our use of cookies as described in this Cookie Policy.
Close notice
ePaperNewsletter
The Museo Vault team at work in Miami. Photo courtesy of Museo Vault

Behind the scenes: Diary of an art handler

Having to cope with everything from curious koi to melting Vaseline, an art handler’s working days are certainly never dull

Every December, a miniature metropolis dedicated to art and commerce takes up residence in the Miami Beach Convention Center. But this is no Brigadoon, appearing miraculously out of the mist. It is Art Basel in Miami Beach (ABMB) and it takes an army of construction workers, engineers and union members to build the bustling art fair’s infrastructure. Even with all that, it would be nothing more than a labyrinth of empty rooms if not for the art handlers. These under-recognised art professionals do most of the work after hours and out of view of the public eye. And although they take care of multi-million dollar works of art, their own labours are often under­valued, as seen this week at New York’s MoMA PS1 in Queens, where the handlers are demanging wages that match their Manhattan bretheren’s. We spoke to some of them about their experiences working at ABMB and other events around the city, to see what it takes to put together such a spectacle. One thing they all agreed on was the most important tool in their kit: a cordless drill.

We begin around early September, meeting with clients to talk about the coming season. About a month and a half before the fair, we start receiving an exorbitant amount of art, which is then dispersed to the fairs. “Work, work, work, work, work,” (said in our best Rhianna voice).

Art Basel in Miami Beach is a state of mind we live in throughout the year. It never really starts or ends; it marks the height of the season, the epitome of the art fair. Some years my involvement begins more than a month before, from public sculpture installations to works that must be built and assembled at the convention centre before the fair opens.

It is pretty manic, we are feeling the full stress now pre-Basel [in early November]. The planning started several months ago, we liaise with our other offices [in London and New York] around August. Most years, we celebrate Thanksgiving on Thursday with our families, and then start bringing work in to the convention centre on Saturday and Sunday.

There is no sleep during Basel. I fly in freelancers because there is an enormous need for skilled art handlers. We are not only busy because of the transient fair crowd and the hundreds of galleries that come in from around the world, but our everyday clients also have large scale projects. We have to pick and choose [right before ABMB] because there are 20 fairs happening. We get 50 calls a day: “Hey, when are you guys going to be around? I need two handlers.” Everybody wants two handlers on Sunday. 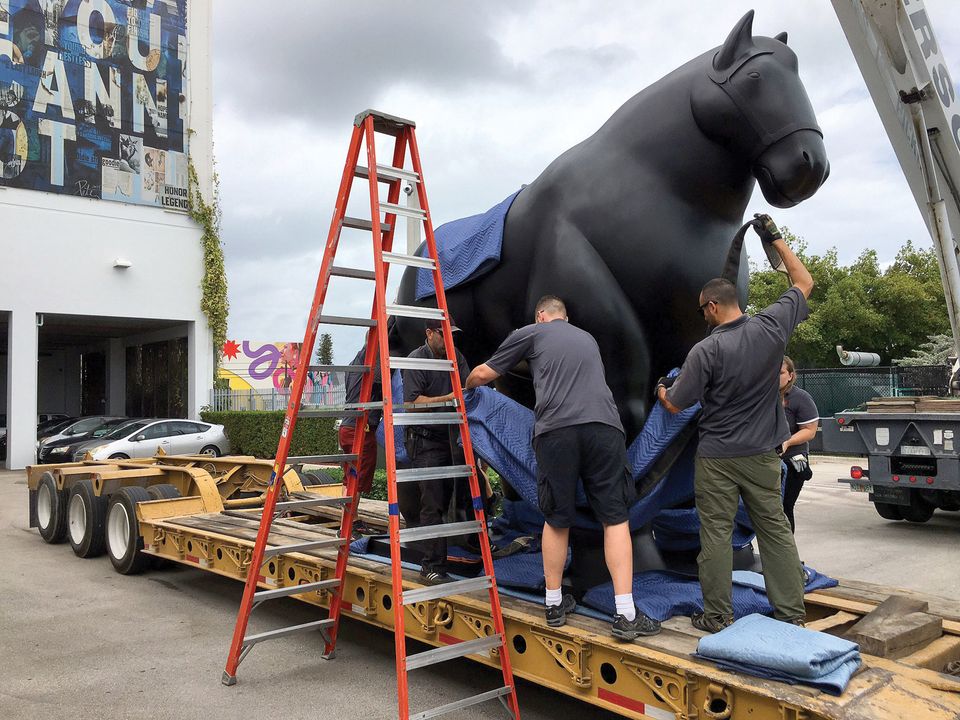 Work starts at 7am and ends anywhere from 10pm to 1am. Typically, it is two or three art handlers per booth leading up to the opening. You are jumping around: you finish one booth, you go on to the next.

In my first year, I was just blown away by the whole production; it is really where you get a sense of the behind-the-scenes in the art world. Of course, it is a market, so you also get a sense of the commodity aspect of it all. You take a moment, look around and see what goes buzzing past, there could be three or four people working on a Damien Hirst sculpture, wearing hazmat suits.

A lot of scenes are out of an Indiana Jones film, like when he is trying to replace the sculpture with the bag of sand that is the perfect weight. We have those moments as handlers where you think: “Is that going to work?”

The most useful tool in my kit—and I know all art-handlers out there can relate to this— is the one tool I cannot find. Second is the handheld cordless drill, which is needed for almost every installation. We once had to install a sculpture in the middle of a giant pond. We put it in a boat and pushed it while swimming surrounded by giant koi fish. Lucky for the sculpture, it did not get wet.

Certain galleries want you to get involved directly with the artists. That is one of my favourite parts, working with them, asking questions and picking their brains on the conceptual parts. We once had to install a huge mobile by Alexander Calder. Logistically, it was challenging because we had to liaise with the union to move the crate and then had to clear a path through the convention centre, as it took up the whole width of the aisles.

We have had to handle some unusual pieces, including highly sensitive Vaseline sculptures by Matthew Barney. It had to be stored in a refrigerator with dry ice and we had to get temperature sensors when we picked it up in Miami to send it to New York. And then we set it up on this pedestal that had a cooling device on it so it wouldn’t melt. 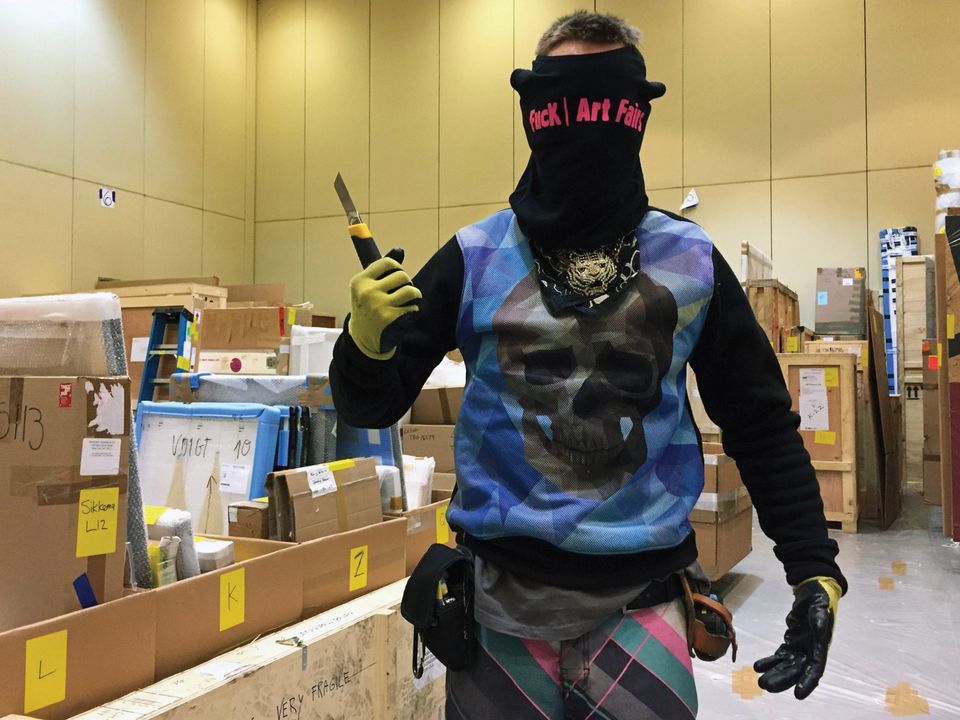 A few years back, we did one of the Art Basel public art projects. There was an artist who wanted to build a house out of 50-pound sandbags. They shipped the sand over—mind you, this is Miami Beach. We are on a beach and they shipped it from Europe, which I find baffling. Essentially, we had a picture of the finished sculpture and five shipments of sandbags and that was it—no instructions. Let’s just say we did the best we could.

We had some trouble with a work by Damien Hirst a few years ago, when an entomologist from the US Fish and Wildlife Service wanted to inspect every single butterfly on his piece. We eventually cleared the piece, but it took a few months for the government agencies to do their research.

We love monumental sculpture. I have a thrill-seeking crew who love big, rigging jobs where we have to spend a lot of time in the air, using cranes. Those projects are as much fun as they are a pain in the backside. It is so rewarding when you are standing at the bottom of a 30-foot sculpture that the entire city is going to drive by, hundreds of thousands of people are going to see it and you put it up there.

My advice: stay focused and stay hydrated. This is a marathon, not a race. Stay positive because negativity will get you nowhere. Stay safe. Stay strong because your work ethic will guarantee your involvement the following year. Stay away from dumb people doing dumb things.

When clients sell well at Art Basel, they will swap out all the work in the booth. The first few days is usually when most of the sales happen, the time when the collectors, museums, art advisers and their clients are all there. So, a lot of the swapping gets done mid-fair and you may have to do the whole booth in a couple of hours.

We are on call during the week. A gallery might call and want to have a different set up the following day. You are moving around less during the fair, because the galleries want us out of sight.

The simple joy every day is to be out of the convention centre and into the crisp SoBe [South Beach] air, to enjoy a couple beers, a smoke, some quick midnight beach swimming and laughs because the next day comes quickly. Wash, rinse, repeat. 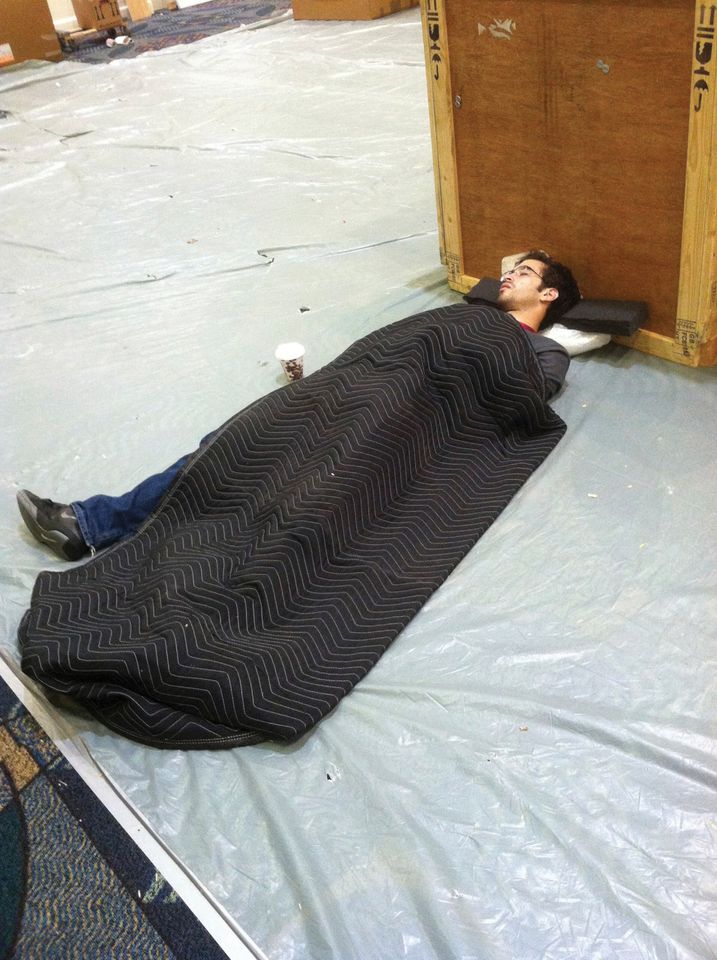 On the final Sunday, we arrive at the fair at midday to get everything ready. We have lists to check if anything was sold and is staying, or if it is being sent on somewhere else. Our guys then come in after the fair closes and break down the stands and pack the works into crates until about midnight or 1am. We return on Monday at 7am or 8am. We are still at the fair on Tuesday night, and sometimes possibly Wednesday morning.

We become very zombie-like after the fair. We do try to get together for an adult beverage to unwind, but again, we know that there is more work the next day.

It is five o’clock on the final Sunday, they sound the bell, and all the art handlers run to their booths to close down. You are doing your best to get everything off the walls, into the crates and on to the loading dock. The first thing I do at the end of the fair is hit the bar, usually Free Spirits, for a cold beer.

We become very zombie-like after the fair. We do try to get together for an adult beverage Eugene Layton, Manager of operations, Gander & White, Miami

The night we close, the fair organisers will bring around some extra champagne bottles and we will pop up a couple and do a toast or two with the handlers, before we all go out to break down the booths and disappear into the thin air. It is just the handlers on the Monday or Tuesday morning, as the tourists and gallerists are already gone. You take a look at the empty convention centre and think: “How did this all happen in two days?” There was carpeting, there was music and façades and now all of it is gone. It is an empty, concrete block again.