By royal command: how Queen Sonja of Norway is raising the profile of printmaking

As the winner of her eponymous award is announced, the artist-royal discusses her passion for the medium and her collaboration with other Norwegian artists

Queen Sonja of Norway is under the graphic eye of Edvard Munch—literally and figuratively. In the drawing room of the Norwegian Ambassador’s residence in London, she is explaining how the Nordic landscape drew her to printmaking, a passion that has seen her set up the world’s largest prize for the medium, the biennial Queen Sonja Print Award (QSPA). Munch’s ethereal self-portrait peers down on us from the wall.

While the fjords and forests have played a part, so too has the legacy of the godfather of Nordic expressionism. “I think it has something to do with Edvard Munch because he tried out all different ways of printmaking,” Queen Sonja says. And then there’s that unique landscape. “Scandinavians live very close to the countryside, to nature. We don’t walk around Oslo looking at exhibitions.” She pauses. “Well, maybe we do that, too.”

In person, Queen Sonja is elegant, engaging and informal, a combination that has particularly endeared her to artists. Does she think that printmaking appeals to a certain kind of character? “You need to be curious, to want to find out why things are happening and how. Maybe there’s a bit of investigation,” she says. “You want to know what and why but in ordinary printmaking you don’t know the result until you lift the sheet; that is inspiring and intriguing.”

Her printmaking adventure began in her 60s – “Many printmakers start quite late,” she says – on a trip to Svalbard, the Norwegian archipelago inside the Arctic circle. During the 2006 expedition, she descended into the darkness of a meltwater ice cave. “We had to climb down a ladder and then into this tunnel under a glacier,” she recalls. Her subterranean flash photography illuminated abstract designs in the ice, images that would become the basis for her first photogravure prints.

Alongside her royal duties she now sets aside dedicated periods for her printmaking: “Three or four times a year, of three to five days. It’s very intense.” A recent collaboration with Magne Furuholmen, the keyboardist from A-ha, has resulted in editions blending text and landscape.

Queen Sonja’s own works—colourful, geometrically abstracted scenes—continue to be stirred by Scandinavian topography. She set up her own art foundation in 2011 and learnt her craft from Norwegian master printers Kjell Nupen and Ørnulf Opdahl. “I remember when I started, Kjell Nupen, my mentor, said that when you now walk out into the countryside you’ll use a more graphic eye,” she says. “And that’s true. Suddenly you start to see lines and compositions that you didn’t think of before.”

The QSPA began as a Nordic award before going global in 2014. It is magnanimous in its approach: this year saw 42 artists shortlisted from 31 countries for works that included linocuts, lithographs, drypoint etchings, woodcuts, screenprints, monoprints and photogravures. The winner receives £40,000 and a residency at the Atelje Larsen workshop in Helsingborg, Sweden.

Queen Sonja, who says she would like the award to be “more on the scene”, has developed the foundation considerably since 2011. Following the death of Nupen in 2014, a grant was created in his memory which recognises emerging graphic artists. And, this year, the first QSPA Lifetime Achievement Award was awarded to David Hockney, who made a rare appearance to accept it in person at the Royal Academy in London on 8 November. “It was a great joy,” says Queen Sonja. 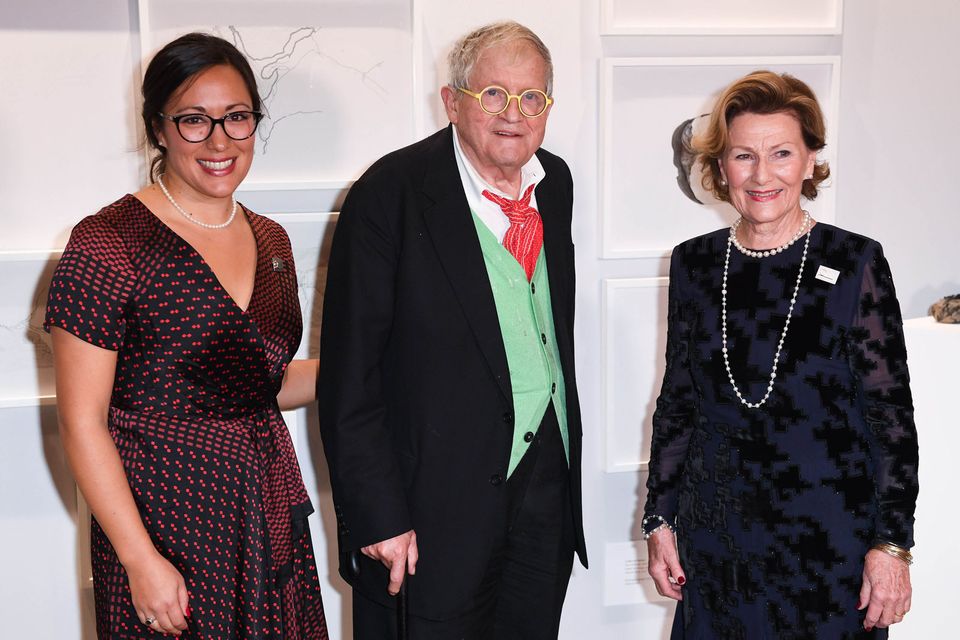 Printmaking offers variety and accessibility, she says. “There are so many techniques, so many ways of doing this, which I think is very exciting. Also, it’s not so expensive, so for young people it’s a way to get acquainted with art.”

The medium is having something of a renaissance with practitioners. “I think it’s a contrast to the hectic life we live, with all the social media, with everything coming in far too much for a brain to take,” says Queen Sonja. “You want to concentrate and focus on one thing and see a result.”

“People often think graphic art is an old or too traditional medium but it can be so much more,” says Tiina Kivinen, the Finnish artist who won the inaugural prize in 2012 for her eerie mezzotints of trees. Two years later, Svend-Allan Sørensen, a Danish printmaker, won with a series of conceptual lithographs of birds.

In 2016 the prize went truly international. That year’s winner was Tauba Auerbach from New York. And the recipient of the 2018 award is Emma Nishimura, a Japanese-Canadian artist. It was “an amazing launch pad; there’s not another award at this scale or international recognition for printmakers” said Nishimura, whose work blurs the boundaries between prints and sculpture. “That’s something I never imagined could happen out of paper,” says Queen Sonja.

Her Majesty’s private art collection, which places Contemporary Nordic works alongside pieces by Robert Motherwell and James Rosenquist, has been formed instinctively. “It’s pure luck,” she says. On her travels she has always visited artists, including Henry Moore, Antoni Tapies and Robert Rauschenberg. In 1982 she dropped by The Factory to meet Andy Warhol, who subsequently created several silkscreen portraits of her for his Celebrity series. (One sits in her collection.)

Queen Sonja likened her encounter with Warhol to an audience with a king. There are, I suggest, similarities between royals and artists: both have their distinctive protocols and attendant courts. She smiles and nods. “Maybe you’re right; I never thought of it that way.” So what does it mean to be both a royal and an artist? “Well, that’s complicated, isn’t it?” she laughs.