By using The Art Newspaper website you agree to our use of cookies as described in this Cookie Policy.
Close notice
ePaperNewsletter
Edvard Munch, The Scream (1895) is in the show at the British Museum. Photo: Thomas Widerberg

From Despair to The Scream: the genesis of Edvard Munch’s most famous work

On our podcast, the curator of the British Museum’s Munch exhibition tells the story of the Norwegian artist’s anxiety at the blood-red sky he saw above the Oslo fjord, and how it led to a masterpiece

While it seems to be a primal, immediate outpouring, Edvard Munch’s The Scream (1893) actually emerged slowly from the depths of his soul. On The Art Newspaper podcast, Giulia Bartram, the curator of the exhibition Edvard Munch: Love and Angst at the British Museum, tells us about the work’s links to a large body of work featuring figures engulfed by nature.

“Much of Munch’s work is about evoking a mood,” Bartram says. “And you will notice that even when the figure’s turned towards you, often their faces are obscured slightly. Unless he’s doing a straight portrait, he’s really tuned into that use of symbolism. Symbolism in art was really redolent at the time, so people were used to reading something else, something other into the work. But the important effect of the ones where figures are turning away—and this does happen a lot, he has one lot of contemplative figures on shorelines, the young woman on the beach, just a single figure looking at sea—they have a dual-edged meaning to them. They draw in the spectator, because they’re trying to work out what’s going on, but then you find that the spectator can also impose what they’re thinking, as if they are in that position of looking away, in contemplation out to sea.”

Of course, The Scream features a figure facing the viewer, but that work, too, has its origins in another painting that features Munch himself with his back to us. “The genesis of the Scream goes back to a very specific episode which he recalls, in fact, when he is in Nice in the South of France, on holiday with an artist friend of his, the Norwegian Christian Skredsvig,” Bartram explains. “He recounts to him an episode which had happened a few months before, which had taken place when he is out for a walk on the road above the Oslo fjord. He wasn’t feeling well. He said: ‘I was feeling sick.’ But he looked up and the most incredible blood-red skies appeared; the sunset was particularly vivid, and he said it was red, red as blood, coagulated like blood.” 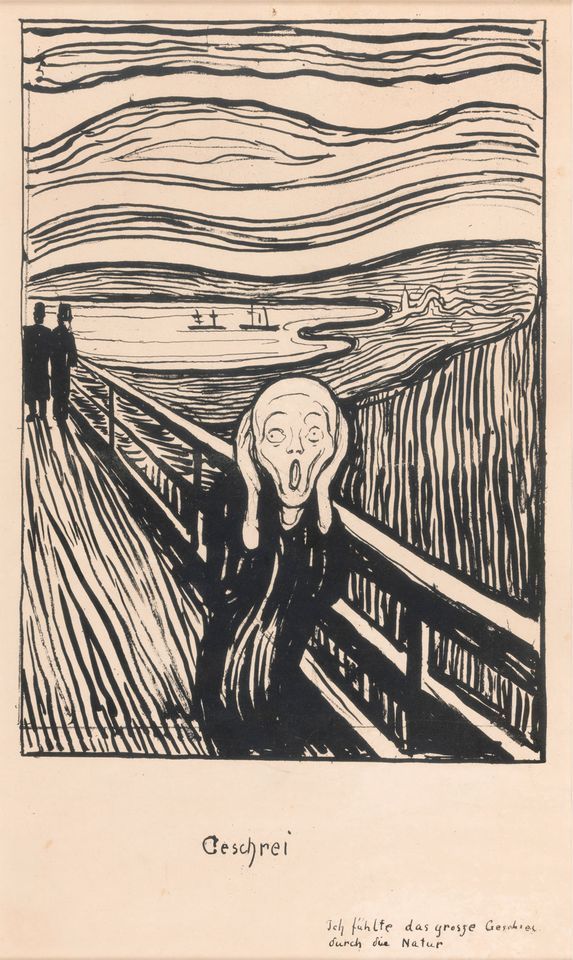 Edvard Munch, The Scream (1895) is in the show at the British Museum Photo: Thomas Widerberg

Munch was clearly obsessed with what he saw and its effect on his mood, as his companion remembered. “Skredsvig, on his part, when he recalls this in his memoirs, really got rather sick of Munch recounting this episode,” Bartram says. He urged Munch to paint what he saw and get it off his chest. The first result was called Despair, for which he made a sketch that appears in the British Museum show, and eventually turned into a painting. “[It] shows Munch with the two friends that he’s walking along the road with, and they’re sauntering way further ahead, completely unconcerned. Munch himself, in this case, is represented as a figure in a coat and a bowler hat, turned looking away down the fjord, as if the despair has made him momentarily pause and take breath.

“This then translates within a year or so into The Scream itself, in which the memorable waving skies and the red and blue clouds are caught up in the whole composition, as though the whole thing is resonating like a tuning fork, and as though the moment of anxiety that he felt well-up in him at this episode is affecting his whole body.” 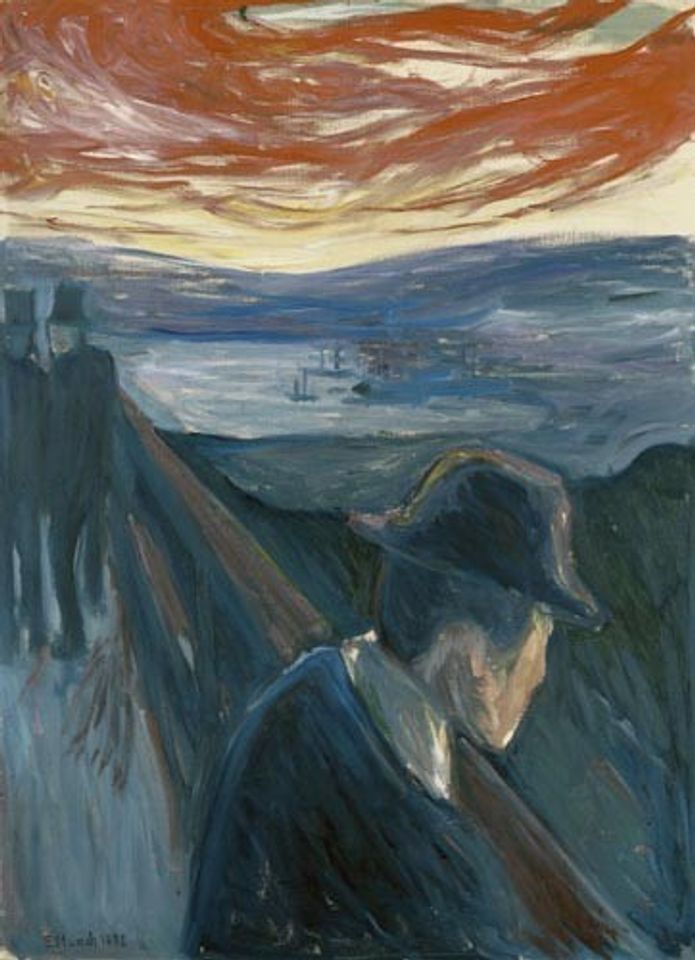 The version of The Scream in the British Museum show is arguably even more graphic and powerful than the painting itself. “He interprets it again in a lithograph a year or so later when he starts using the technique, in which the red and blue bands are translated into just black wavy bands which again swirl through the whole composition. And he inscribes it here, with an inscription in German, as he was now in Berlin, which I translate here. Underneath [the image], he says: ‘I felt the great Scream pass through nature.’ And the figure is now memorably holding his hands over his ears as though the whole episode is making the figure itself resonate.”

Munch’s friend’s encouragement to Munch to translate his vision and emotion into art, even if it was born of irritation, had paid off. “Clearly [The Scream] relates to the moment of inner turmoil that Munch felt and related to Skredsvig so accurately a few years before.”

You can hear the full interview on The Art Newspaper podcast, in association with Bonhams, which you can also find on iTunes, Soundcloud and TuneIn, or wherever you usually listen to podcasts. This episode also features our New York team discussing The Shed, the shapeshifting arts centre that has just opened to mixed reviews in the Big Apple.