Game on: artists turn to the virtual world of video games during the pandemic

As lockdown continues, video games are proving to be ripe territory for artists and budding curators to experiment (and play)

With coronavirus forcing millions to remain at home, social simulation video games have quickly risen to the task of providing much needed cultural space—even if it is virtual. At the forefront of this is Animal Crossing: New Horizons, the (mostly) low stakes video game of island life for the Nintendo Switch console, which has become a platform for impromptu artistic production and creative experiences. The newest edition of this 20-year-old series was released on 20 March, just as many countries were issuing stay-at-home orders, and the simple game play—your goals are to explore and fit out your island home, and visit other people’s to trade or interact—quickly became a balm for the stresses of quarantine as well as a new site for artistic practice.

One early adopter of the platform is Shing Yin Khor, a Los Angeles artist whose normal practice involves building immersive, interactive installations but who “loves video games” and previously worked in the field of tech privacy. Soon after Animal Crossing launched, and suddenly unemployed as an installation artist, Khor turned their creative energy towards reimagining famous works of art using the game’s built-in features. A miniature version of Robert Smithson’s Spiral Jetty (1970) was formed from pebbles on the beach, and a swarm of yellow polka-dotted parasols recalled Christo and Jeanne-Claude’s 1991 Umbrellas project. Since there are few competitive objectives in Animal Crossing, “you have this compulsion to build things for your friends”, Khor says. But there are restrictions on what you can build and that is part of the game’s appeal. “It’s not an open-world building sort of game in the way something like Minecraft is,” Khor says, referring to another popular platform that has been used by artists and designers to create unique digital sculptures and architecture from simple building blocks.

“I’m breaking down all of these very wonderful, incredible art pieces to their component parts, which is really not much at all—but that’s not the point of the art,” Khor says. “I did [Marina Abramovic’s 2012 performance piece] The Artist Is Present during the first few days Animal Crossing was out, and it was actually possible to replicate the experience of sitting in my house in a red dress, and people came by and they sat in this chair [opposite me]. When I was doing it, I was just being silly, but as people came in and sat in that chair, they would tell me how emotional it actually felt. I’m still unravelling what it meant, but it was just a really wonderful, ridiculous, charming little happening in this game.” 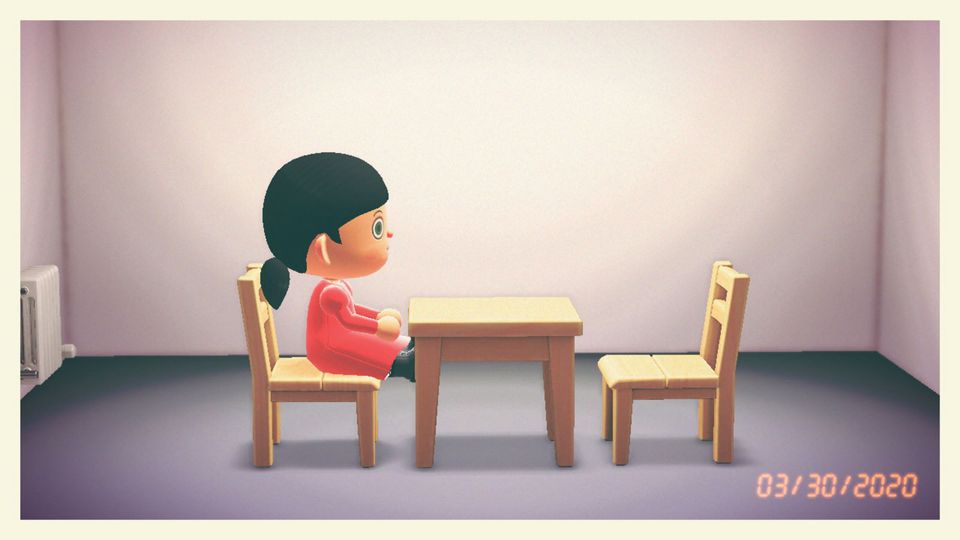 The limited mechanics of these types of video game might be what allows for such occurrences to happen. “In many ways, the medium of games is very abstract. It’s very much the rules that we hold in our heads, and sometimes we give those rules over to other things, like digital technologies,” says Tracy Fullerton, an independent game designer and the director of the Game Innovation Lab at the University of Southern California. In 2017 Fullerton created Walden, a game based on the writing of Henry David Thoreau, one of the first video games to receive a media arts grant from the National Endowment for the Arts. (It was recently made free to download for parents who suddenly need to home-school their children and are looking for entertaining and educational resources.)

One of the key things an artist must understand in any medium is its “affordances”, Fullerton says—what it will allow you to do. For games, this means recognising that they “constrain in order to almost push us into a type of freedom”, she says. “Once you start to understand that, then you can craft experiences that, I think, are artistic expressions in and of themselves. It’s very much the way that surrealist games work, or Fluxus pieces; there’s a set of rules, and out of those rules comes an expressive experience.”

But, Fullerton adds, rules are also there to be broken. “Isn’t that what art’s about, in some respects? I would argue that the work that we did on The Night Journey was, in many ways, like this,” she says, of her collaboration with the video artist Bill Viola. That work, released in 2007, was more about spiritual awakening than following any proscribed direction. “We were taking the feel of a game, the technologies of a game, and changing some of the core expectations so that we could make this a journey of self-discovery rather than a journey where you were trying to achieve something that the game told you to achieve.” 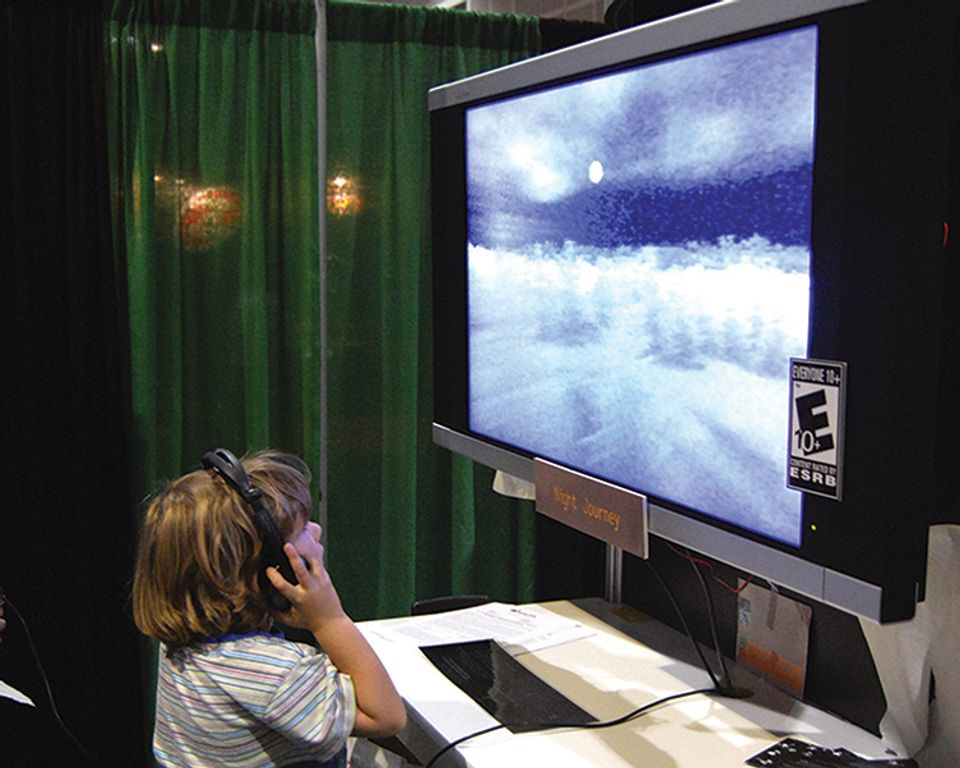 The Night Journey is a collaboration between the games designer Tracy Fullerton and the video artist Bill Viola Photo: Scott Chamberlin

And while museums and galleries remain closed, video game platforms offer an alternative space for works to be displayed. For example, in the multi-player online game Occupy White Walls, released in 2018, artists can upload digital images of their works that other players can collect and display in their own galleries. More recently, some players have designed immersive digital spaces that are like installation projects in themselves.

The aim of Occupy White Walls is to appeal to anyone curious about art. “When we go to a museum like MoMA or the Metropolitan Museum, it’s basically somebody else’s museum,” says the game’s creator Yarden Yaroshevski. “You didn’t choose what’s on the wall, nobody asked you—it’s the one-size-doesn’t-fit-everybody model.” Some people will find work they like in such a setting, Yaroshevski adds, but more often they will see plenty of work they do not like, and “they feel like it's their problem, they don't get it”.

The game seeks to overcome that barrier though its built-in artificial intelligence (AI), named DAISY, which recommends works based on an individual’s taste. This is defined through the art players save to their personal collections, which on average can include some 800 works of public domain images by historic artists such as Leonardo da Vinci or Piet Mondrian, as well as new works by living, largely unrepresented artists.

“The AI treats everybody equally,” Yaroshevski says. “This is really important because if we were working with human curators and it came down to one work by Carl Alexander [a Dutch artist who plays the game] or another by Van Gogh, most human curators would say Van Gogh is way more important. But if the AI thinks Alexander is a better fit for an individual, then he’s going to get the opportunity to be seen.”

Yaroshevski says the platform has been getting requests from art galleries, museums and art schools since the pandemic forces the closure of many space and stationary websites “don't cut it anymore”.

This is not the first attempt by a video game platform to replace the real-life experience of seeing art. A replica of the Musée du Louvre was recreated in the early 2000s in the game Second Life, and was filled with digital images and sculptures by users.

And museums are getting in on the act again. Last month, the Getty in Los Angeles launched a new tool that allows gamers to convert images in its collection into mini works of art to be used in Animal Crossing. The game also has its own in-game museum, where players can donate objects they have found, which are transferred to special pre-designed displays. “Your museum gets better the more that you contribute. There’s a deep, wonderful, optimistic message in that,” Fullerton says. “Not only is it a peaceful place for me to go and sit, and just take in the ambience, look at the beautiful pictures, but it's also a signal that my contribution to this culture of this little island is important, and it won't happen unless I take action.”

Such virtual museums are unlikely to completely replace the experience of actually being present with art in person, however. “It performs another service for us,” Fullerton says. “It reminds us that this beauty exists in the world, that there is an outside world where we do have connection with one another, until we can actually be there together again.”

about 7 hours ago
Hide and seek: Hirshhorn museum to cover entire building in a giant painting by Nicolas Party