By using The Art Newspaper website you agree to our use of cookies as described in this Cookie Policy.
Close notice
ePaperNewsletter
Gilbert & George. Courtesy the artists and Lehmann Maupin; New York and Hong Kong

“Art for all” is the motto behind Gilbert & George’s career, a belief that also defines how they approach their market. This autumn, to mark their 50th anniversary, the artists are unveiling 170 new Beard Pictures at their galleries in New York, Paris and London. Smaller satellite shows are planned for Brussels, Athens and Naples.

Gilbert & George have divided the series equally between their primary galleries: Lehmann Maupin, Thaddaeus Ropac and White Cube. “This is the essence of who they are. No other artists work this way,” says Rachel Lehmann, who first showed their work in New York in 1997. “It’s about . . . making sure all their galleries have the same commercial opportunities.”

With associations ranging from Jesus Christ to Santa Claus, jihadis to Shoreditch hipsters, the Beard Pictures are born out of the same egalitarian principles. The price range–£50,000 to £400,000–is also relatively accommodating. As Lehmann says: “You don’t need an art history degree to relate to a beard.”

Thaddaeus Ropac, who says Gilbert & George are “part of my DNA” after working with them for almost 30 years, acknowledges the “unique” practice of releasing a large body of work every two to three years. “An artist usually produces 40 works in a year, that’s what the market can take. But Gilbert & George don’t think in those terms. They are not about the market, they are about creating their own world.”

By keeping their market in check, Gilbert & George have also enabled smaller museums and foundations to acquire their work. The artists, who have had institutional shows around the world, including a large retrospective at Tate Modern in 2007, often create poster editions or produce their own catalogues to help museums finance exhibitions.

Unsurprisingly, prices rise once a series sells out. “Early black-and-white or black-and-red pieces from the 1970s and early 1980s are much in demand and you won’t get much for under £1m,” Ropac says. The artists’ auction record, achieved in 2008, stands at £1.9m ($3.8m with premium) for a monumental black-and-white work from 1973. 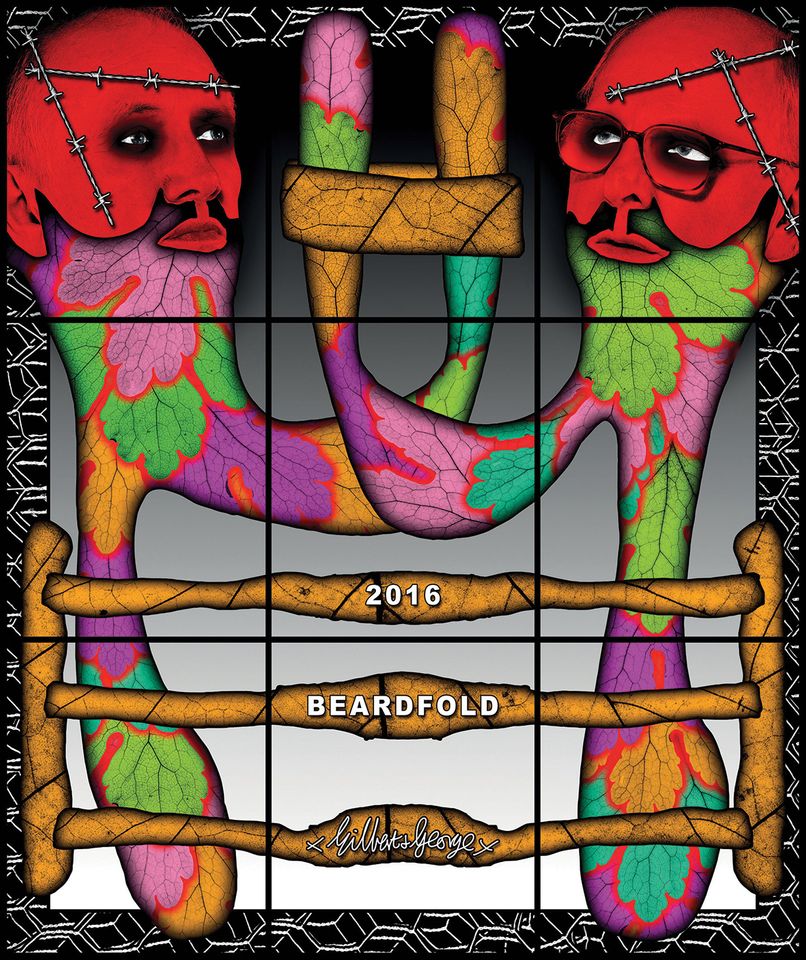 Alongside the Beard Pictures exhibitions, Lévy Gorvy in London, which does not represent the artists, is presenting The General Jungle or Carrying on Sculpting (1971). First shown in New York in 1971 at the Sonnabend Gallery, the group of 23 large-scale charcoal drawings has never been seen together in the UK.

The exhibition is largely loaned, with works coming from MaXXI, Rome and the Sonnabend Collection Foundation, as well as from the estate of Nina Sundell and the collection of Antonio Homem, both Sonnabend’s children. A limited number of works are for sale, priced under $1m. In 2010, a single drawing from the series sold at auction for £337,250 ($526,377 with premium).

As Gilbert & George celebrate 50 years together, attention is inevitably turning towards their legacy, with a foundation reportedly in the works. “If they wanted to make their work more expensive, they could have drip-fed the market,” Lehmann says. “But this is their strategy, it’s about leaving a legacy. Anybody could walk into the gallery and buy a work by one of the most prestigious artists around today.”