Remembering Jackie Matisse, a pioneer of kite art and art in virtual reality who had a special feel for chance and the power of collaboration

She saw 'flying art' as a collaboration with wind and light and found ways to 'fly' her kites underwater and in galleries, kept in motion with blown air and mechanical reels

At the beginning of the 1960s, a mother in her early 30s, Jackie Matisse was still in search of the personal artistic territory that would allow her to express herself. She was “interested in the art of my time”, she recalled in 2000—she was the granddaughter of Henri Matisse and already collaborating with her stepfather Marcel Duchamp—but was looking to understand her place within it. And then, while taking a taxi from New York City to the airport, in 1962, she caught sight of a kite flying above the rooftops of Harlem—a “line drawn in the sky”—and became “fixed on the idea of making kites ... and using the sky as a canvas”.

In 1970, she signed the Art Volant Manifesto—it declares that the kite is “a vehicle joining the spirit and the physical”—with six other artists. Over the next four decades, Jackie made “flying art” with her kites of vivid colours—acrylics on sail cloth—and patterns cut in crepe paper, She made groups of kites to fly inland, to work with sky, fields and forests; groups to be flown in the light by the sea; and groups, in water-resistant paper, to be flown and filmed under water. The idea of submersible kites came to her in 1979 when one of her creations fell into the sea.

She devised ways to show this essentially kinetic art in gallery spaces, with the long, patterned kite tails massed in groups in a breeze, or looping up and down on mechanical reels, in seemingly perpetual motion. She showed in Paris in 1972, in London in 1976—at the Institute of Contemporary Arts—and in exhibitions across Europe and the US, with large retrospectives in 2000—Art that Soars: Kites and Tails by Jackie Matisse at the Mingei International Museum, San Diego—and in 2013 at the Musée Matisse in Le Cateau-Cambrésis, Normandy.

Jackie stood out in her field for her distinctive take on chance, not least in collaboration: with light and wind; with the musician-artist John Cage, the musician David Tudor, the choreographer Merce Cunningham, and the artists Jean Tinguely and Niki de Saint Phalle; and with technology. Her work in 2002-05 with Virginia Tech and the University of Illinois produced the most ambitious work in virtual reality that the art world had seen to date, powered by a distributed—in other words collaborative—network of supercomputers, in the early days of broadband internet­­. Critics were taken with how readily Jackie entrusted process to multiple technologists to scan, code and manipulate the digital models of her work, and display them by projecting images on to the interior surfaces of a cube, or “Cave”, built with 3m tall squares. The viewer, wearing special glasses, was an interactive collaborator, able to manipulate a virtual kite using a wand. The VR kite show was mounted at tech events in Europe and the US, with a simplified version, on a flat screen, made for her gallery shows such as Art Volant at Zone, New York, in 2005.

Jackie had a bilingual feeling for the power of chance. For the English meaning—happenstance—in a way that Duchamp and Cage would have approved: the sight of the Harlem kite in 1962; the kite lost to the sea in 1979. And she recognised the French meaning of “chance”—her good fortune—to have had Henri Matisse as a grandfather and Marcel Duchamp as a stepfather. “I have had a lot of luck in my life,” she said in 2013, “perhaps most of all in having the opportunity to spend time with Henri Matisse and watch him at work towards the end of his long life; and then to know and work for Marcel Duchamp, from a younger generation than Matisse but just as engaging.” (My translation.) Duchamp, she said, gave her “permission” to find her own way.

I have had a lot of luck in my life, perhaps most of all in having the opportunity to spend time with Henri Matisse and watch him at work towards the end of his long life; and then to know and work for Marcel Duchamp jackie matisse

Jacqueline (Jackie) Matisse was born in Neuilly, on the edge of Paris, in 1931. Her father was Pierre Matisse, a leading contemporary art dealer of his generation who opened his space in the Fuller Building on East 57th Street, New York, in the year of Jackie’s birth. Her mother, Alexina “Teeny” Sattler, the daughter of a distinguished eye surgeon in Cincinnati, Ohio, had moved in the early 1920s to Paris where she was briefly a student of Constantin Brancusi. Pierre and Teeny divided family life between Paris and New York, with the addition of a farm in New Jersey in 1941. Pierre represented his father, Henri, in New York, as well as the cream of European artists of the younger generation including Balthus, Marc Chagall, André Derain, Jean Dubuffet, Alberto Giacometti, Joan Miró (Jackie’s godfather) and Yves Tanguy. The shows he put on for Miró (37 in all) and Giacometti were of particular significance.

Jackie was the eldest of three children, with two brothers, Peter and Paul. When she was seven, a frieze that her parents had commissioned from Miró for the nursery bedroom arrived in New York. Woman Haunted by the Passage of the Bird-Dragonfly Omen of Bad News (now in the Toledo Museum of Art, Ohio) is over 3m long and depicts monstrous figures in a claustrophobic space.

Jackie’s brother Peter was kept awake by the painting, and thoughts of the monstrous teeth. But Jackie, who remembered the painting by the title the family invented—“The Battle of the Sea Monsters”—told John Russell, author of Matisse: father and son (1999), that she remembered it as dramatic and energising. Years later, when she had created kites that “flew” underwater, entwining vividly patterned and coloured tails, she found herself thinking back to “The Battle of the Sea Monsters”.

At the Brearley School in New York, Jackie made friends with Niki de Saint Phalle who became, in the 1960s, with her second husband, Tinguely, a neighbour of Jackie’s in France. (Jackie later created glass containers for sacred waters at Saint Phalle’s stupendous Tarot Garden, 1979-2002, at Garavicchio, on the coast north of Rome.) In 1939, Pierre Matisse was in France at the outbreak of the Second World War and was mobilised to serve in the military. The redoubtable Teeny looked after both family and gallery in New York until Pierre returned in the winter of 1939-40. 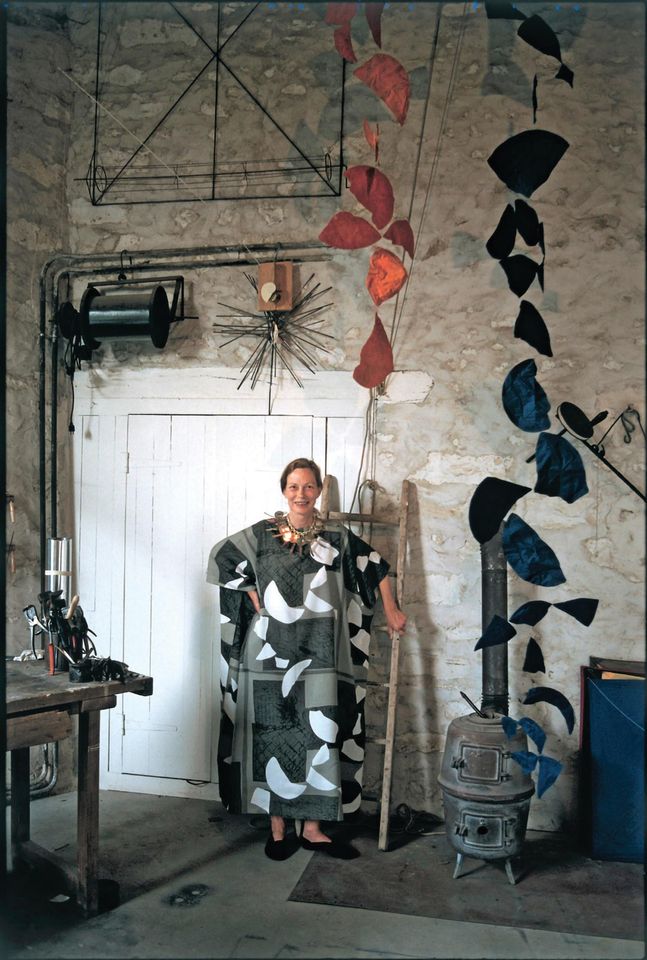 Decades of experiment: Jackie Matisse dressed in her “moon pieces” pattern, with matching assemblages, in her studio near Paris Serge Bailhache

As a young woman, Jackie was portrayed by artists in her family and their circle. In 1947, she was sketched by Balthus and, in multiple drawings, by her grandfather. (It was the year that Henri published Jazz, a collection of cut-paper works on circus themes; the clean lines and improvisatory character of Henri’s cut-paper work has echoes in the “moon” shapes, inspired by shards of broken plates, that feature in Jackie’s art.) One of Henri’s portraits, the most monumental of the set, foreshadows the grave and thoughtful beauty revealed in the photographs Man Ray made of Jackie around 1960, a solo portrait and group portraits with two of her children.

In 1949, Jackie started literature studies at the Sorbonne, in Paris. In the same year, her parents were divorced. Teeny renewed an old acquaintance with Marcel Duchamp and married him in 1954. In the same year, Jackie married Bernard Monnier, the descendant of many generations of bankers and art collectors. They had three sons and one daughter.

From 1959 to 1968, Jackie worked on the construction of Duchamp’s new series of Boîte-en-valise—portable miniature monographs with reproductions of the artist’s own work, a concept that he had first developed in the late 1930s. There were 150 of them. “They were very complicated,” she remembered in a memoir of Duchamp written for the Tate Gallery, “because you had to put frames on the mini reproductions of his work. I had to fit it all exactly the way he had planned. He didn’t give many instructions about how to do it, so I had to use my good sense to assemble them.”

It is in no small part thanks to her support that Duchamp scholarship expanded and thrived over recent decades Ann Temkin, Chief Curator of Painting and Sculpture, Museum of Modern Art, New York

That “good sense” helped make Jackie an eloquent champion of her own work, a nurturing host for gatherings at her house south of Paris, and a clear-headed custodian of the memories of Duchamp and of her grandfather. In 1987, she accompanied her father, Pierre (who died in 1989), on a trip to see the great works by Henri Matisse—including La Danse (1910)—in the collection of the Hermitage, in St Petersburg. After Duchamp’s death in 1968, Teeny had moved to Villiers-sous-Grez, near Fontainebleau, where she made an archive of Marcel’s work. Jackie joined in this work in the mid-1980s (Teeny died in 1995)—translating texts and recording memories of Duchamp for the Philadelphia Museum of Art. “It is in no small part thanks to her support,” says Ann Temkin, Chief Curator of Painting and Sculpture at the Museum of Modern Art, New York, “that Duchamp scholarship expanded and thrived over recent decades.” That work is now carried on under the auspices of the Association Marcel Duchamp.

As her work developed, Jackie Matisse added to her repertoire hanging assemblages—with moon shapes, and found pieces—some of them minute and hung on strands of hair; and miniature kites bottled in water or air. Filmed flying kites on a beach for her 2000 San Diego show, she shows total concentration as she deftly handles the line. “Come on! Allez!” she cries. “Please climb.” After decades of experiment as a kite artist, her work was still on the move, a collaboration with nature, a game of chance.