When Pope John Paul II inaugurated Michelangelo’s restored frescoes in the Sistine Chapel on 8 April 1994, Gianluigi Colalucci was not present. Instead of figuring prominently at the pontifical mass together with the art historian Fabrizio Mancinelli, artistic director of the whole enterprise, and his other close collaborators, Colalucci chose to offer his expertise on television, commenting on the newly cleaned murals and on their primary function as an adornment to papal ceremonies. In his autobiography, Io e Michelangelo (2015), Colalucci described himself as someone who rarely let his emotions show.

Colalucci enjoyed his work tremendously— whether he was restoring Titian in Padua or Giulio Aristide Sartorio in the Italian parliament buildings, whether working for the Vatican or in his own business, or when teaching at the Universitat Politècnica de València for Pilar Roig or lecturing around the world. His claim to fame is the restoration of Michelangelo’s Sistine frescoes in 1980-94, and the professional ethos he showed in that work. Maintaining a consistent level of cleaning over 14 years, and over a large surface—about 1,200 sq m. between the vault and the altar wall—was a great achievement and the prerequisite to bringing back a unity to Michelangelo’s two creations: the ceiling with The Creation of Adam (1508-12) and, above the altar, The Last Judgement (1532-41). Since the scaffolding where Colalucci worked was open to scholars, artists, journalists and the occasional VIP, the enterprise became not only a demonstration in fresco technique but also a visual tutorial in what Colalucci’s mentor, Cesare Brandi, advocated in his Theory of Critical Restoration (1963)—that a restoration had to honour the “potential oneness of a work of art” and to respect and keep in balance both its historical and its aesthetic qualities.

A retiring character caught up in public controversy

Colalucci was a perfect match for Mancinelli. They enjoyed the Sistine Chapel limelight together, but also faced criticism from colleagues and artists, as well as an intense controversy, built up in the media, about the extent of the cleaning. Colalucci was too wise to trespass on questions of attribution or dating, while Mancinelli always related his art historical conclusions to the technical evidence. Bringing Michelangelo’s colour to the people in their exciting lectures, each in his own way answered the Michelangelo expert Michael Hirst’s request: “What do we learn about the artist?” Their restoration continued the earlier work on the chapel’s 15th-century frescoes, which ­Deoclecio Redig de Campos, then artistic director of the Vatican Museums, had undertaken in the 1960s and 1970s. While De Campos had wisely avoided a clash of the quattrocentisti with the “dark” Michelangelo, the revelation of Michel­angelo’s colours in Colalucci’s work later enabled a further approach to Perugino, Botticelli, Ghirlandaio and Cosimo ­Rosselli, which we completed for the Papal Jubilee of 2000, cleaning their wall paintings to the same level as those of Michelangelo. Thus, all three phases focused on the aesthetic unity of the chapel. 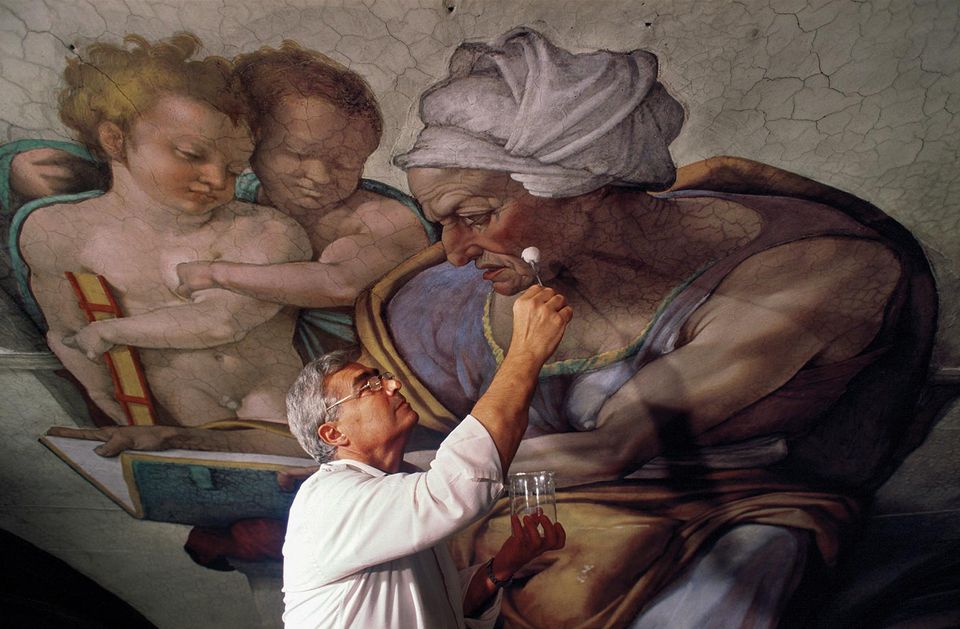 Mancinelli died in 1994, less than two months after the conclusion of the work in the chapel. At the funeral, Colalucci again declined a prominent role. He did not want to join Fabrizio’s pallbearers, but as the coffin passed him by, he reached out to touch it for a personal, almost venerating, farewell. Colalucci was instrumental in choosing Mancinelli’s successor and convinced me to accept the position, since he was concerned that “someone who knows how we work” should ensure the continuity of De Campos’s idea of the Vatican restoration laboratory.

Colalucci retired at the end of the same year as chief restorer, but remained as a consultant to the Vatican Museums. At the time, the restoration of Raphael’s Stanze in the Vatican Museums had reached The School of Athens, perhaps Raphael’s most emblematic wall painting. In the face of unfounded outside criticism, and after analysing the painting under layers of fixings and retouchings for several months, the restorer in charge, Enrico Guidi, reported: “There are 57 figures in the fresco, and there are 57 states of preservation.” A work of this importance requires a clear vision of what a restoration can achieve before work starts—something Colalucci always insisted on. Carlo Pietrangeli, the director general of the Vatican Museums from 1978 to 1995, who had to approve decisions, faltered—as he had previously done at the beginning of the Sistine restoration. Colalucci proposed that he would restore one figure­—that of Ptolemy­—and that if the result was satisfactory, we would continue, or otherwise cease work. Colalucci again put his own and the laboratory’s reputation on the line. He frequently contemplated the great responsibility involved in maintaining such icons of Western culture, but relished the challenge.

He would evoke the events of Raphael’s loggie —where he was confronted with what he saw as the most troublesome work of restoration of his experience—as a warning whenever he felt the Vatican Museums were becoming too self-assured.

This was not Colalucci’s first crucial encounter with the artist from Urbino. In the mid-1970s, before he became chief restorer at the Vatican, he had intervened with De Campos, then director of the Vatican Museums, about the restoration work being done in Raphael’s loggie on the second floor of the Vatican Palace. Treatment with an inorganic chemical product was destroying the frescoes. Colalucci’s action saved the decoration, and what one sees today in the vault of the second bay of the loggie—where Raphael has illustrated the story of Adam and Eve—is his retouching of what remains. He followed even in this situation the principles of Brandi’s Theory, of not covering up damaged work but making a balanced adjustment which does not hide the ruins. It had required all Colalucci’s learned and practical culture to deal with such a challenge. He would evoke the events of Raphael’s loggie —where he was confronted with what he saw as the most troublesome work of restoration of his experience—as a warning whenever he felt the Vatican Museums were becoming too self-assured.

Colalucci was not a tall man, but he was attractive, self-confident and serene. His soft, pleasing voice gave him a touch of charisma and conveyed his competence. He was born into a Roman family of lawyers, though his father worked as a journalist, initially as a theatre critic. Gianluigi did not conform to this family tradition, but it perhaps gave him his powers of reasoning and his clear exposition of a topic. He enrolled in 1949 at the recently founded national restoration school—Cesare Brandi’s Istituto Centrale di Restauro (ICR)—and took his diploma in 1953. Brandi’s Theory of Critical Restoration, a seemingly simple but highly philosophical book, does not provide instructions for conservators but stimulates a methodical approach to a work of art or architecture.

Colalucci was a personification of Brandi’s holistic approach to artworks. This determined even his relationship to his art historical counterparts. He insisted that a restorer propose several different levels of cleaning and their relative implications, but that the art historian directing a programme of restoration had to decide how far to go. He urged people to consider the work of art in its entirety at all stages of a restoration.

Trained in the ruins left by the Second World War

In his twenties, Colalucci received his training in restoration among the remains of works destroyed by bombing during the Second World War, including Mantegna’s Ovetari Chapel in Padua. It gave him experience for a lifetime as a restorer. After Colalucci had worked for seven years in Crete, Assisi and Palermo, it turned out that De Campos, then director of the laboratory at the Vatican Museums, was looking to transform it into a professional institution, an approach he repeated as director general of the scholarly department when he appointed Mancinelli. Looking for someone who could “restore Raphael”, De Campos turned for advice to the ICR. Colalucci thus entered the Vatican Museums in 1960 as an outsider, free of the usual recommendations and “family bonus”. He maintained his independence and became chief restorer in 1979 until his retirement. He was convinced that “the value of an institution derives from the people who lead and represent it; in other words, their level of quality, efficiency and reliability, and not only from its history”.

I met him for the last time on his final visit to the Sistine Chapel, in February 2020, when Raphael’s tapestries—which first hung beneath Michelangelo’s ceiling in 1519—were exhibited in the chapel once more, for just one week. It was a rare chance to see the chapel’s decoration, which he had done so much to preserve, as a whole—as it had been intended in the lifetimes of Michelangelo and Raphael. Gianluigi was, he said, satisfied with what he had achieved.

Appeared in The Art Newspaper, 334 May 2021
More FeatureTopicsThe Vatican MuseumsRestorationMichelangeloRaphael