Top online museum and art tours to enjoy from home

As Covid-19 continues to disrupt the daily lives of people across the globe, forcing many to self-quarantine, we are compiling the best online offerings from artists, museums and galleries. Whether you are staying at home or your local museums and galleries have closed, here are some of the best digital initiatives to satisfy your creative cravings.

Your first stop for online art tours and resources is definitely Google’s Arts & Culture platform: they have digital documentation of more than 1,200 international institutions. From virtual tours to high definition images of works from the collections, you could get lost for hours on this site. You can search by artist or art historical periods, or you can look at museums from a particular country or browse your local area in the map view. The institutions included on the platform include the big names like the Metropolitan Museum of Art and the Solomon R. Guggenheim Museum in New York and the Uffizi Gallery in Florence as well as smaller but well-loved spaces like Amsterdam’s Van Gogh Museum and the Calouste Gulbenkian Museum in Lisbon.

A Google Street View of the Colosseum in Rome

If heritage is more your thing, Google also has a range of cultural sites you can explore online through its street view. You can choose from bucket-list locations like Stone Henge, Machu Pichu, the Colosseum and the Pyramids, to name but a few. If you are looking for more than just 360-degree views, the Arts & Culture platform recently launched the Heritage on the Edge project, which calls attention to five Unesco World Heritage sites under threat from climate change. The website and accompanying app includes 2D maps and high-resolution 3D models as well as accompanying texts with information about the endangered landmarks. There are also two “pocket galleries” on the app that allow users to explore a Nine-Dome Mosque in Bangladesh and a former Portuguese fort on Kilwa Kisiwani island, off Tanzania’s south coast, through augmented reality.

A screenshot of the Hermitage tour

A whirlwind video of the State Hermitage Museum

Unrelated to the coronavirus outbreak but fortuitously timed nonetheless, this video is a five-hour-long cinematic journey through one of the world’s biggest and most visited museums. While it comprehensively goes through 45 galleries and 588 works of art in the Russian museum—with close ups and panorama views—as well as live performances, there is no audio or captions for explanation. The film is actually a promo for the iPhone 11 Pro, but it nonetheless offers an impressive wander through the palatial space. 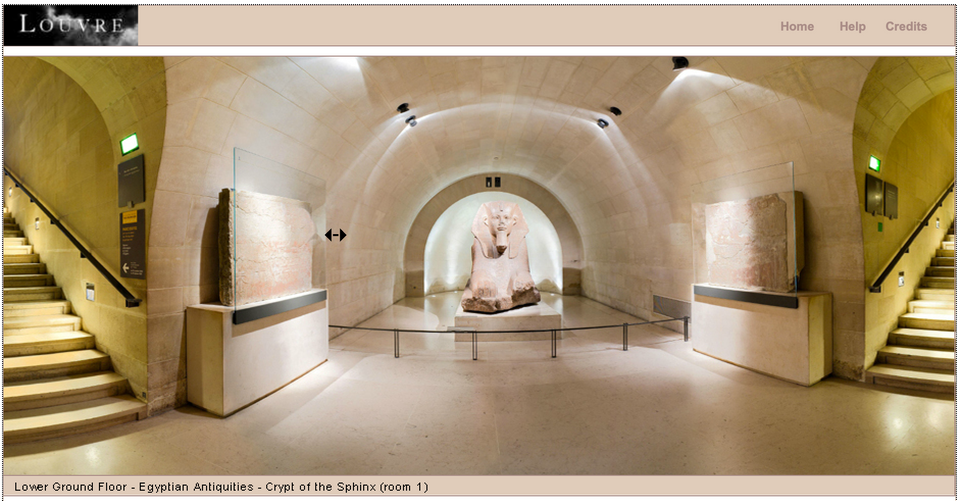 The most popular museum in the world has an excellent online offering of ways to enjoy the space without physically attending. You can delve into three of the museum’s spaces through virtual tours: you can “walk” its Ancient Egypt wing and its moat (hidden in the basement), but the online tour of the Galerie d'Apollon is a bit lo-fi (it was made in 2004, would you believe). You can click on the objects on display for a close-up look and basic information about the work. 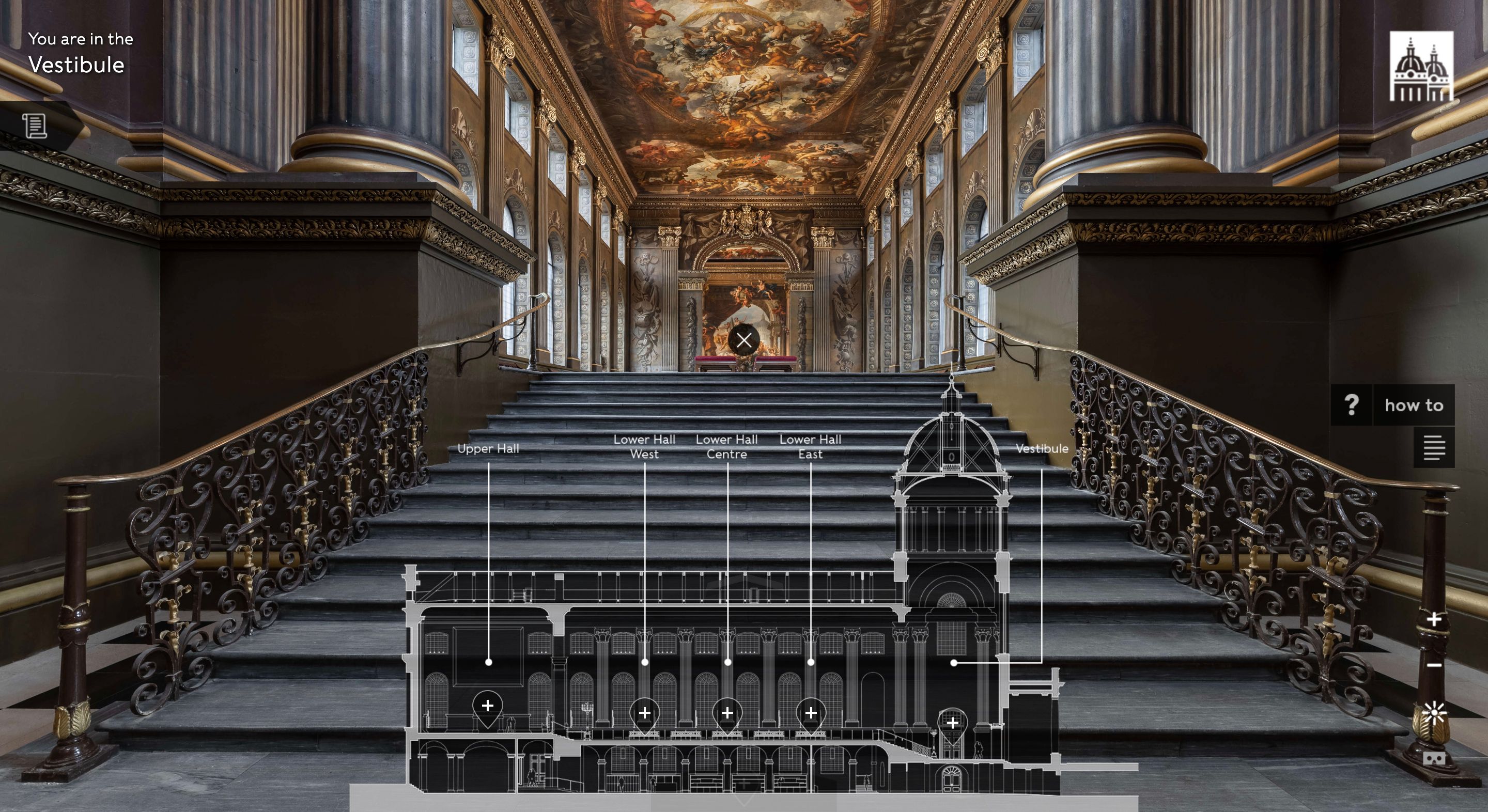 A screenshot from the virtual tour of the hall of the Old Royal Naval College in Greenwich, London

One of London's best kept secrets as it's a little off the traditional tourist track, the Painted Hall at the Old Royal Naval College in Greenwich is spectacular. It reopened in March 2019 after a two-year renovation and this hi-tech 360-degree tour is a seamless online experience of what is described as "England's Sistine Chapel". 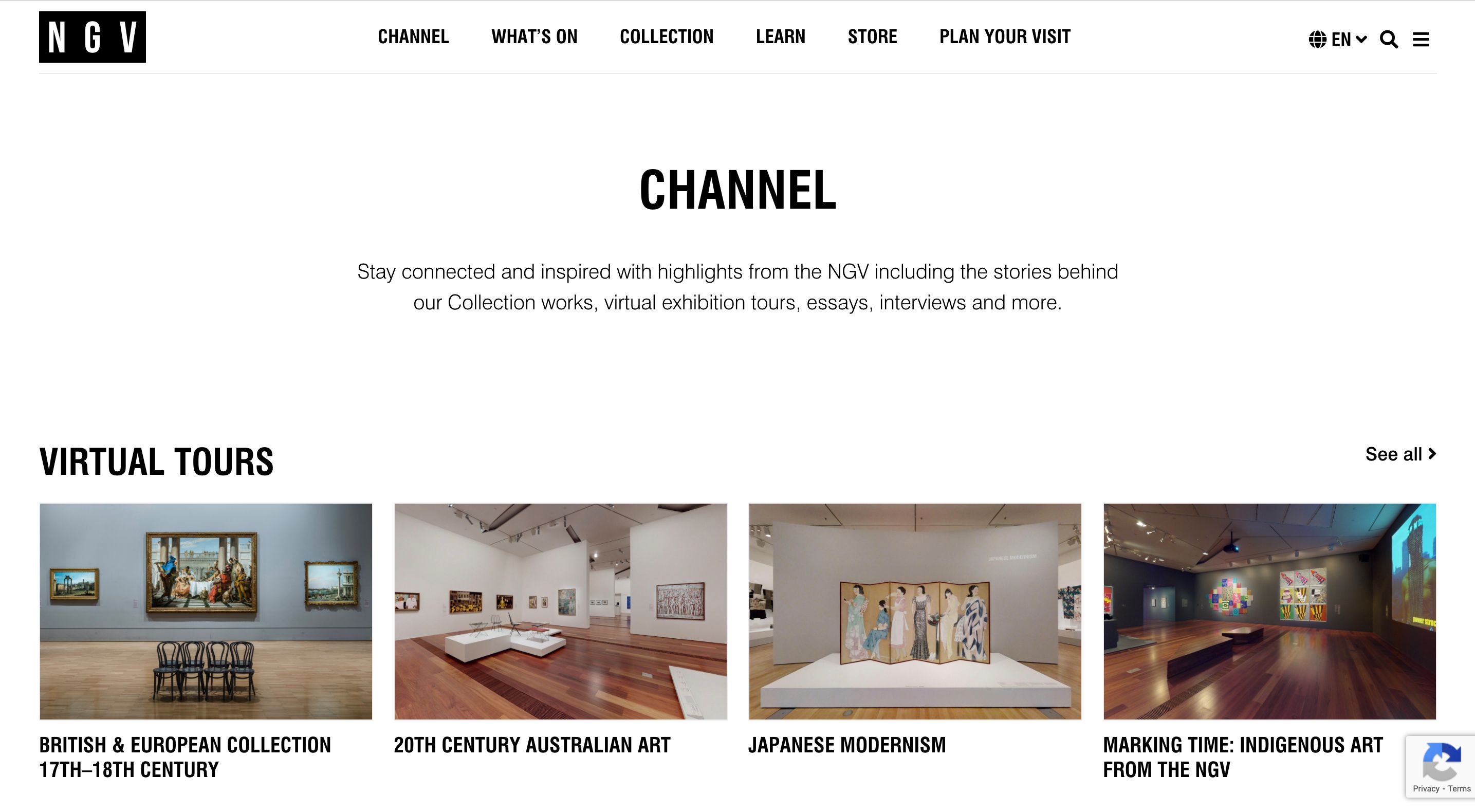 The National Gallery of Victoria in Melbourne, Australia, has developed a very impressive Channel section on its website. From here you can choose from almost 20 well made 360-degree tours of the collection and the building or listen to discussions on art; watch videos on specific works and artists; or read from a selection of digitised publications. One of the coolest features is the self-guided tours section where you can download a gallery map and then choose how to work through the spaces, whether through "Slow Art" guided exercises looking at specific works or with art-led meditations sessions. 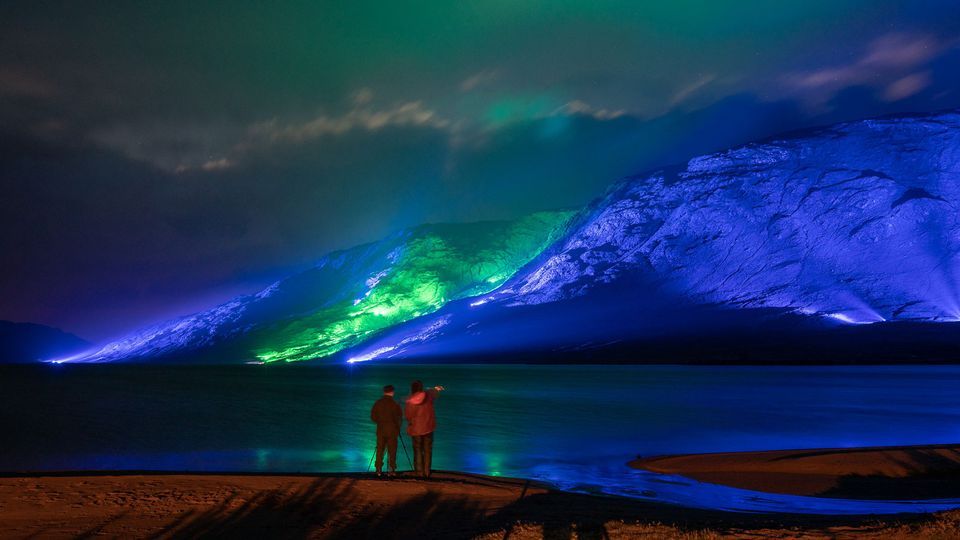 The big events and exhibitions of 2020

Many great exhibitions have been forced to close early, have been delayed or have been cancelled altogether and some museums have been able to capture the shows digitally so they can still be experienced online. The Museo Nacional Thyssen-Bornemisza in Madrid was showing Rembrandt and Portraiture in Amsterdam, 1590-1670, when it was forced to close in March. It then launched an online tour of the show. The Castello di Rivoli in Turin had to close just after launching three new exhibitions, and it then released digital tours and related videos for the shows. Also in Turin, the Fondazione Sandretto Re Rebaudengo announced new digital initiatives on its website and social media platforms. "Even though it’s not possible to visit Berlinde De Bruyckere’s exhibition in person, our series of daily stories posted on Instagram, Facebook and our website, will make you feel like you here," the gallery's website says. The city of Galway in Ireland had planned a huge cultural programme for its year as the European Capital of Culture, but then almost all of the events were cancelled. They have, however, released a video of Savage Beauty by the Finnish artist Kari Kola—one of the most spectacular outdoor light works ever created that would have drenched a five-kilometre stretch of Connemara mountain in shimmering emerald green and sapphire blue light. 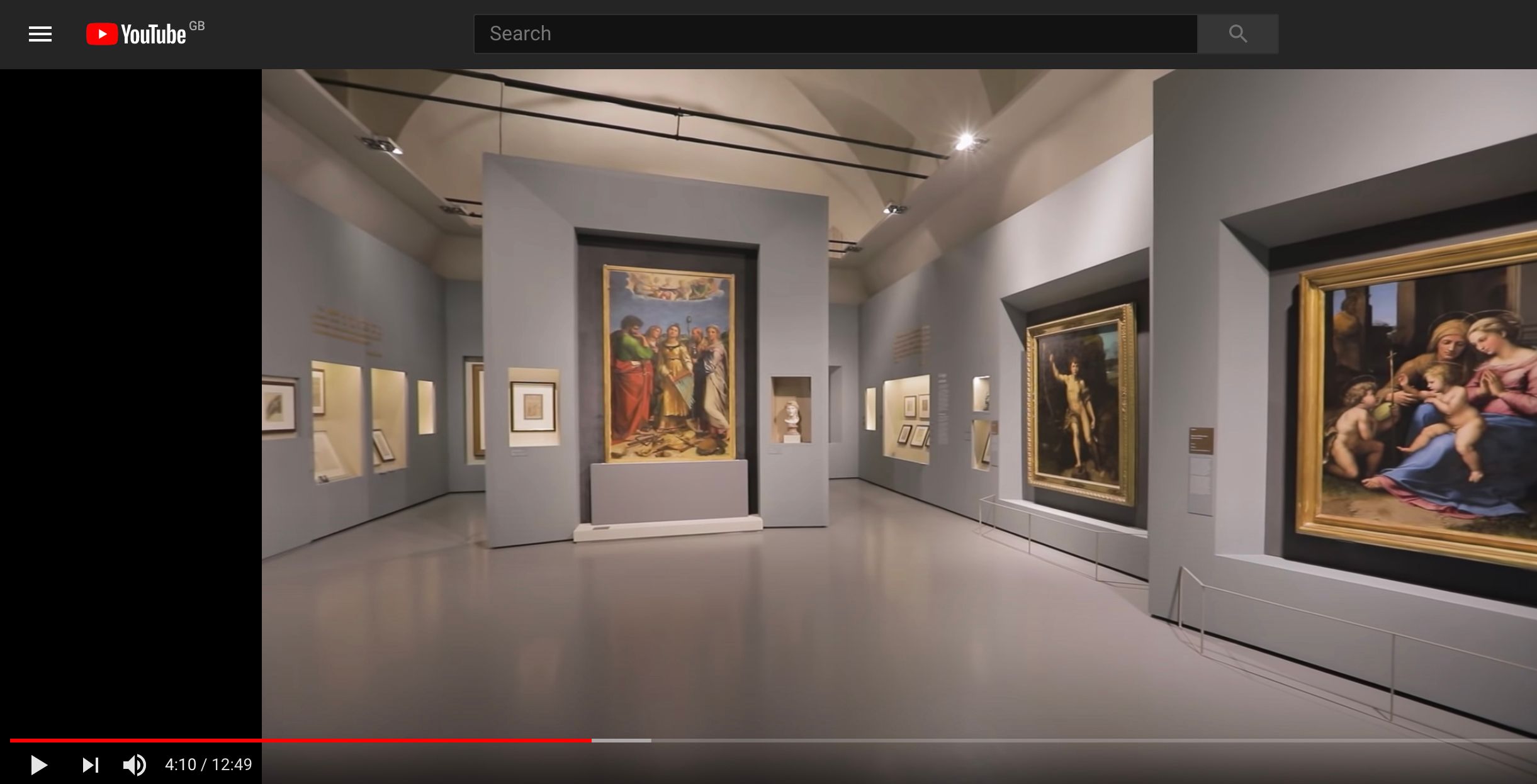 With the 500th anniversary of Raphael's death, this year was meant to be a big celebration of the Old Master. One of the big celebratory shows was Raphael 1520-1483 at the Scuderie del Quirinale in Rome—it managed to reopen briefly after lockdown, but it has been digitised forever in this guided video tour. 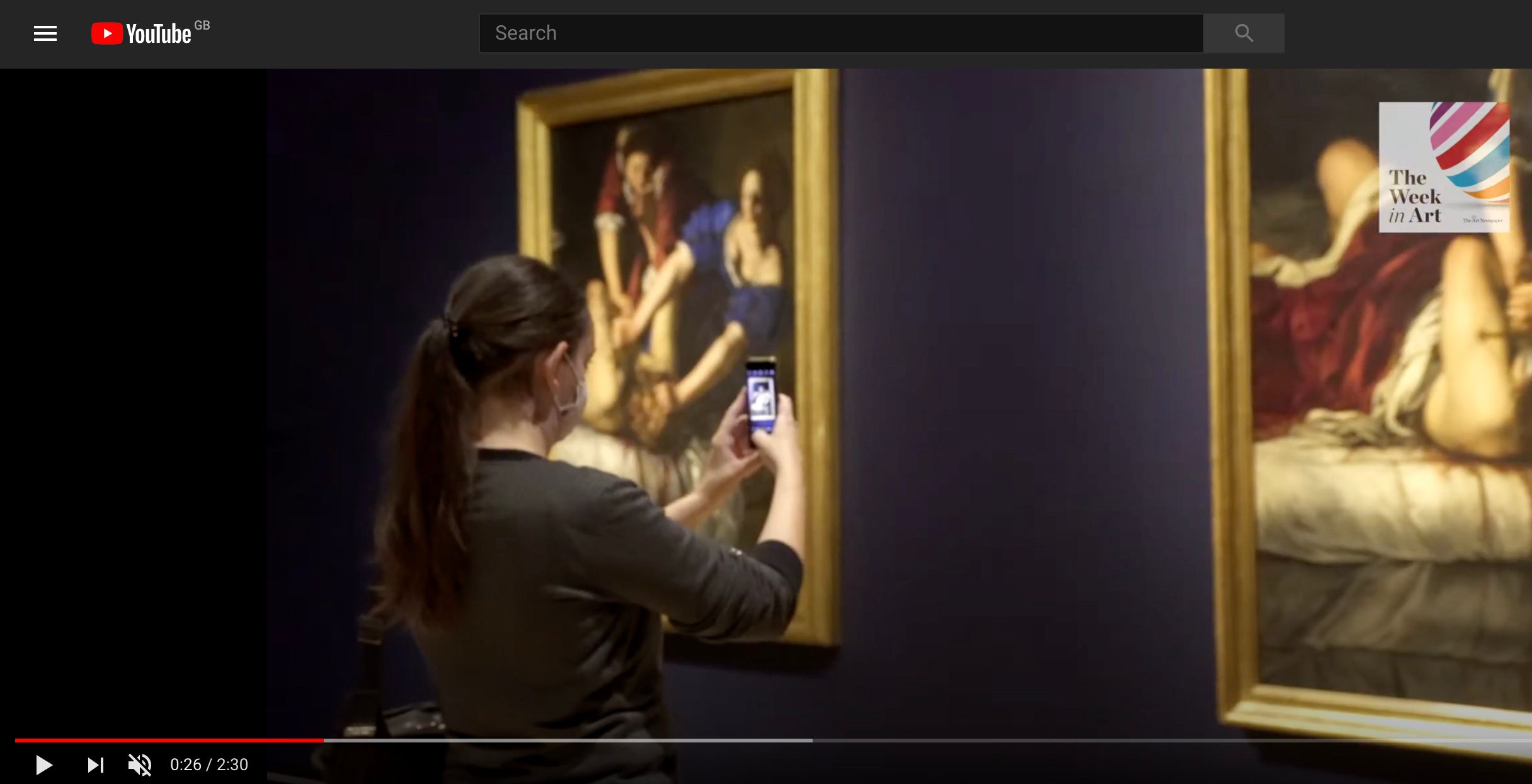 One of the most anticipated shows of the year is Artemisia Gentileschi at the National Gallery in London. Showing important works by the female Old Master, it is the gallery’s first major show dedicated to a female artist in its 196-year history. The exhibition was delayed but finally opened on 3 October. Because of restricted timed tickets and the fact that only locals will now get to see the show, The Art Newspaper has put together a mini video tour and an in-depth podcast walk through, complete with images of all the discussed works, so that those who can't visit in person don't have to miss out on the blockbuster.