As he takes on the Hyundai Commission in the Turbine Hall, the French artist on exhibitions as works of art, why he dislikes the word “installation” and engaging with Londoners

One of the most influential artists of his generation, French artist Philippe Parreno has made his name over three decades by using a mind-boggling range of media to explore how art can and should be experienced. He is known for working collaboratively with fellow artists as well as set builders, digital technicians, film-makers, musicians, ventriloquists and a cinematographer to make animations, films, sound works, light pieces—even an all-black garden—all of which focus on the importance of treating the exhibition as a work of art in itself, rather than a collection of discrete objects.

To say that Parreno challenges institutional conventions is an understatement. In his exhibitions anything can happen: curtains can dance, light works operate like musical instruments or the temperature of a space can plummet and a snowdrift appear. His many films include a reanimated Japanese Manga character; 17 different cameras trained on the footballer Zinédine Zidane; a robot programmed to write like Marilyn Monroe; and a recreation of the train journey carrying the body of Robert Kennedy from New York to Washington.

Now, the Paris-based Parreno has been invited to create this year’s Hyundai Commission in the vast industrial space of Tate Modern’s Turbine Hall, following in the footsteps of, among others, his sometime collaborators Carsten Höller, Dominique Gonzalez-Foerster and Tino Sehgal. Speaking ahead of the opening of Anywhen in the Turbine Hall, he tells us how he approached the large-scale, high-profile commission.

The Art Newspaper: Of the 16 artists who have been commissioned to make work in the Turbine Hall, you are the first to visit the architects Herzog & de Meuron to talk about the space—why did you do this and what did you discuss?

Philippe Parreno: Each time I do an exhibition I always like to question the nature of the space and its history: what it is and what it was. Many art centres are buildings left over from the Industrial Revolution that have been transformed into cultural centres—so there’s always a story to tell. This was the case with the shows I did before in the Armory in New York and before that in the Palais de Tokyo [in Paris]—all these spaces have a history. And I wanted to know about all that with the Turbine Hall, but of course it is also well known as a building of [more recent] architecture, and so I thought it’s the only case where I can actually meet the architect. I was very interested [in the fact] that it’s a public space and that it’s free, and I wanted to know where that idea came from and how it was structured. When I went to see Herzog & de Meuron they told me that the idea of the Turbine Hall as a free, open, public space had been at the heart of the project from the very beginning and that was very useful for me.

This year, with the opening of the adjacent Switch House, it is also the first time that the Turbine Hall now connects with Tate Modern’s new building.

I also wanted to know from Herzog & de Meuron how the [Turbine Hall] has been transformed. One thing that was a trigger for me was that Herzog & de Meuron not only thought of making a large public space that was free, but they also made it even larger by digging down and making it higher. So it was especially interesting that the verticality of the building was designed by the architect—it wasn’t like a found object. For me, that was the beginning of the scenario, and as you will see in the show I use this verticality a lot: there are a lot of things that are coming up and down. 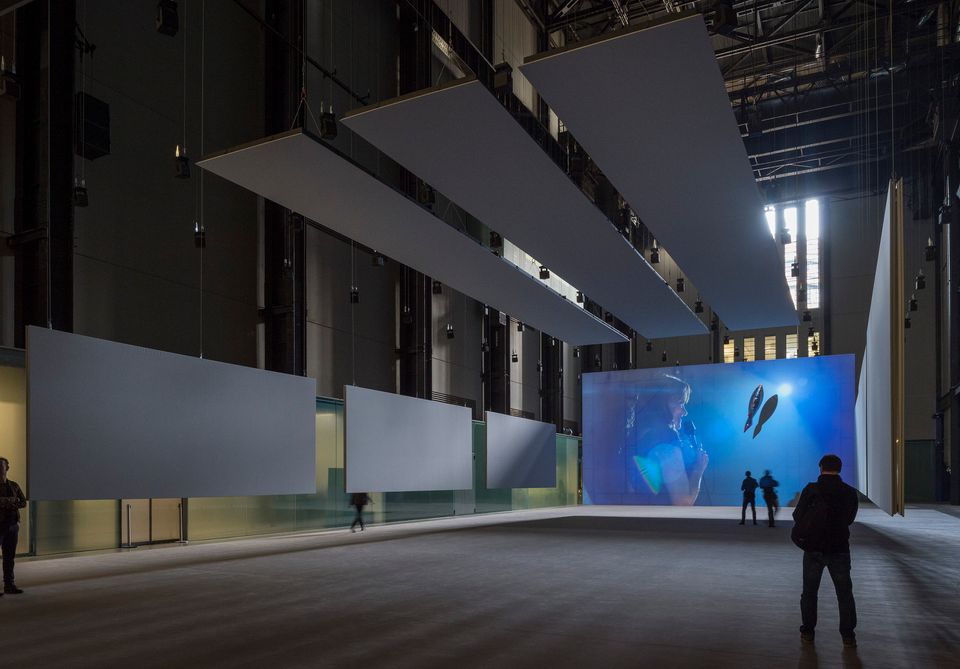 You’ve said that you thought of the Palais de Tokyo as a garden and New York’s Park Avenue Armory as a city plaza—so how do you view the Turbine Hall?

For me the Turbine Hall is a public park. I took it as an English park, rather than a French park. It is protected from the rain and it is a place where people hang around and play and eat and do things and gather. The fact that it is free, and that people come in the morning and leave at night—I wanted to use that as a journey. I thought it would be interesting to take that as a place where things are different in the mornings to how they are at night. If you go to a park in the morning you will see trolleys with babies and later people coming for lunch with their lunchboxes; then in the evening you may have a banjo player, and at night the screening of a film. So I took it as a place where time can float and things can come in and disappear: that’s the structure of the project, it’s a time project.

You consider an exhibition to be a medium in its own right and having a language of its own, with the different components acting as props or adjuncts to make a composite experience. Is this the case with the Turbine Hall? 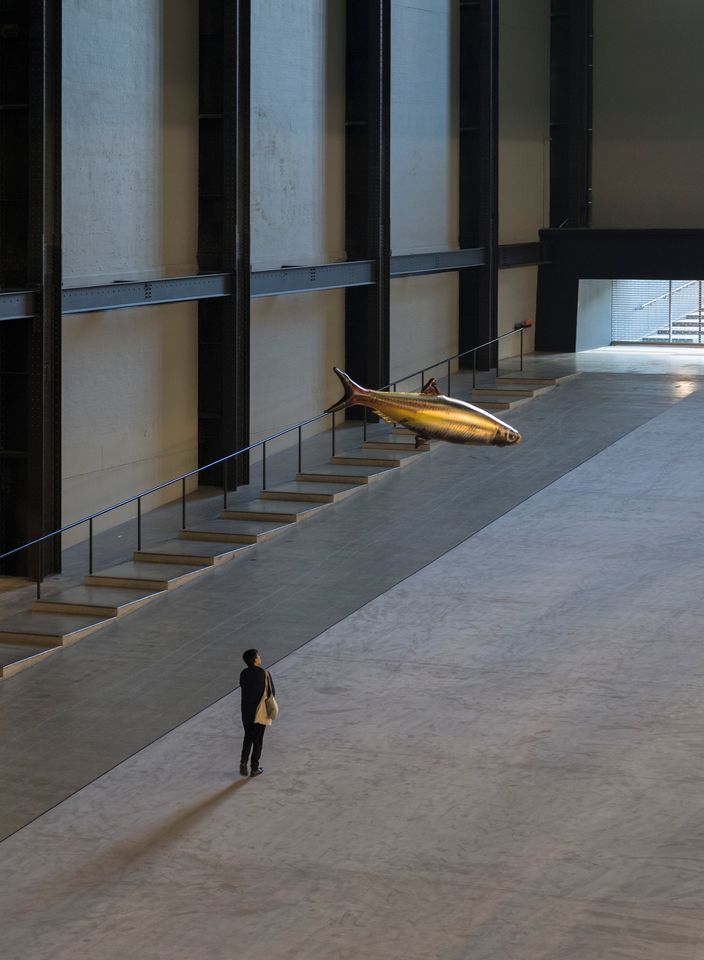 Yes, the project is absolutely a form, with a structure and a logic that obeys the rules of the space and which exists at that moment, in that time and in that space, and which disappears afterwards. I think about it as an automaton that works on a timeline of eight hours: it opens at ten and closes at six. So when you open the doors the automaton starts to wake up and starts to produce its movement, and when the sun declines and there’s less light you start to have another kind of atmosphere. So it is linked to the sun and the way it comes into the building, and the way people use the building and the way the building exists, inside and outside. It is never the same and it would be impossible to repeat anywhere else. I like the fact that people can come in to the Turbine Hall in the morning and meet a friend who went at the same time the day before and who will maybe have seen something completely different. You may miss things, but that’s OK.

Your exhibitions are immersive experiences involving multiple elements yet you dislike the term “installation”—why?

I started to hear this word when I was a student, and first of all, it’s not nice word—it’s quite ugly. It seems to say that there’s a form that we call “art” and then there’s something else we call “installation”. I’ve always been afraid of neologisms: why go looking for some other word than “exhibition” in the first place? It’s really narrow-minded. When I started, people used to say to me that what I made wasn’t art and that I wasn’t an artist because I worked in collaboration with other artists. So I will stick to what it is: I am a visual artist and I try to engage art into rituals that are not necessarily coming from the 19th century.

You have used the Indonesian gamelan as a metaphor for how you make exhibitions. Does this apply to the Turbine Hall?

Yes. A gamelan is an ensemble of different percussion instruments, which are relevant as individual objects, but when they come together they become a single instrument. To play it you need a lot of musicians, but led by a single person, the dalang—a kind of spiritual leader who conducts and directs the ensemble. So for me it was quite a good definition of an art object that on its own can occupy space and is something quite decorative, and when it comes together with other objects then it becomes performative again. When I first talked about the gamelan it was in connection with my Marquees [a series of works dating from 2006 that explore space using light and the format of a marquee canopy] but it is an interesting way to talk about my understanding of an exhibition—an exhibition is made out of objects but these objects come together to produce more than their components.

You say your work addresses the public and not an audience—what’s the difference?

The main difference is that you can design an audience. An audience comes for something that you’re designing an event for, but the public is not expecting anything—they are just people, basically. A way to evolve exhibitions is to stop thinking about the audience and to start considering the public.

So what do you want the public visitors to the Turbine Hall to experience?

I want people to spend time with themselves and in the space and without expectations. If you spend time in the space looking at things, you also spend time with yourself. I’m interested in trying to see if we can find new forms of rituals for appreciating architecture, looking at moving pictures, hearing sound and coming to see objects. I want to see if we can offer another type of possibility for engaging with form and with people.