Volkswagen: the motor of a global arts network

The German car-maker takes cultural sponsorship very seriously, as shown by its arts education policy and links with MoMA

The unsettling fireball that bleeds red all over August Kopisch’s 1848 painting, The Pontine Marshes at Sunset, first caught Udo Kittelmann’s eye in a museum store in Berlin seven years ago. “I only knew him as an author until then,” says the director of Germany’s National Gallery. “The painting was extraordinary.” Kopisch’s play of colour and light spurred Kittelmann to look into the life of the all but forgotten Prussian artist. Kopisch, he discovered, had produced more boldly pigmented paintings, poems and prose, a portable heater and a “pleorama” that on dry land simulated a boat ride across the Bay of Naples: “An artist full of curiosity and the spirit of invention.” Kittelmann was hooked.

Luckily, it is a habit he has been able to afford for a few years. In 2013, the National Gallery agreed a three-year partnership with the German car manufacturer Volkswagen. “We wanted a partnership that would allow us to look at artists outside the ‘big names’ of the standard canon,” he says. “This kind of partnership meant we could put on exhibitions we otherwise wouldn’t have been able to do.” Last summer, Kittelmann and Volkswagen Group extended their partnership until late 2018 and announced the first ever Kopisch exhibition, which is on show until mid-July in Berlin’s Alte Nationalgalerie.

For Volkswagen, the show is an important endorsement of its group-level global arts sponsorship, which began five years ago with the Museum of Modern Art (MoMA) in New York. Such a demonstration of cultural engagement is all the more important as the company stands accused of manipulating data on vehicle emissions all over the world. Since 2011, Volkswagen Group’s partnership with top-tier art museums has spread from New York to Berlin and—albeit more briefly—to the Yuz Museum in Shanghai. And the company clearly has an appetite for more. It is looking for more projects in China and will be supporting the “Season of Engineering” at London’s Victoria and Albert Museum (V&A) from this month to November, with further projects likely. Unlike other corporate expenses, Volkswagen Group’s arts sponsorship has not been cut in the light of the emissions scandal.

Mutual support “Our cultural engagement will continue—it’s part of our social responsibility as a company,” says Benita von Maltzahn, head of cultural and social engagement at Volkswagen Group, who works both at corporate headquarters in Wolfsburg and in the company’s representative office in Berlin, walking distance from the Alte Nationalgalerie. “We will continue to support our partners, as indeed our partners continue to support us,” she says. “We have been privileged to support top-flight global art institutions, whether it’s putting on innovative exhibitions or funding educational programmes.”

Such confidence on the one hand reflects the modesty of corporate arts budgets; Volkswagen Group’s annual global arts budget is thought to be in the low single-digit millions, a fraction of what the company spends on football. But it is also a sign of how important corporate arts sponsorship has become. “Twenty years ago, arts sponsorship was short-term and opportunistic, driven by the chief executive—or the CEO’s wife,” says Klaus Siebenhaar, professor at the Institute for Arts and Media Administration at the Free University in Berlin. “Today, companies approach arts sponsorship as a strategic issue.” According to Siebenhaar, Volkswagen is not the only company active in the arts; national rivals BMW and Daimler are both very active. “But I’d say Volkswagen is one of the ones whose professionalism and strategy is exemplary.”

It was corporate strategy that drove Volkswagen Group’s tie-up with MoMA in 2011. That year the company opened a new factory in Tennessee, started a big sales push in the US—and looked at arts sponsorship. “Volkswagen had always sponsored the arts on a local or regional level at Volkswagen production and research sites—the Staatskapelle and Semperoper opera house in Dresden, for example,” says Von Maltzahn. “But with MoMA we wanted to go a step further. We wanted to show that as a global company we have a global responsibility for the arts that we take seriously. It wasn’t just about sponsoring exhibitions or wanting to see our logo on the wall of a museum. We wanted to support the arts in a meaningful way. That quickly led us to the idea of education and arts education.” MoMA, she notes, was founded by a group of educators and museum curators. 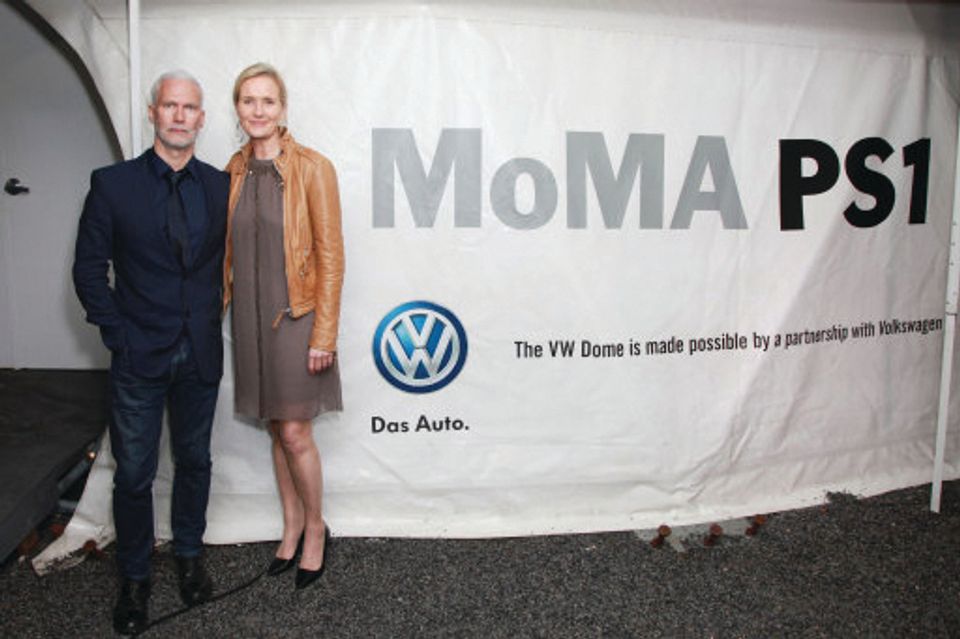 Alongside supporting exhibitions like the headline-grabbing Sigmar Polke show in 2014, Volkswagen supported the introduction of new online courses from 2011 and other education initiatives at MoMA and MoMA PS1. In June 2015, Volkswagen and MoMA announced their third two-year partnership in succession and Volkswagen’s elevation to “lead partner of education”. The company now funds a training programme for curators. “Volkswagen’s deep commitment to education has provided critical support for education programmes at the museum,” says Todd Bishop, MoMA’s senior deputy director of external affairs. Online courses were “serving thousands of students”.

Volkswagen was soon looking to transfer the MoMA model to Germany. In 2012, Von Maltzahn switched from subsidiary Bentley, where she ran marketing and communications in Europe, to become the first in-house head of cultural sponsorship at group level. A paper conservator by trade, Von Maltzahn understood the value of the steady, less ostentatious approach over one that goes for one-off blockbusters. “We want as many people as possible to experience art and culture,” she says. “That also means we have to be committed to showing a wide array of subjects, things that would not otherwise be on view.” Volkswagen’s gaze quickly fell on Berlin and its National Gallery, a largely publicly funded museum (unlike MoMA), spread over six sites in Berlin.

The long haul The National Gallery’s director liked what he heard. “If you are going to get in the same boat with someone, it’s better to do it for more than one project,” says Kittelmann. With Volkswagen, the gallery has beefed up its education programme. And it has put on shows that might otherwise not have been seen, including a retrospective of the sculptor Rembrandt Bugatti, brother of Ettore, whose company is now part of Volkswagen Group. Kittelmann calls it “a position beyond the established canon”, which he says has boosted the credibility of both partners. “We’ve been able to develop our own position towards exhibitions. You need some time for that sort of thing.”

The transfer of ideas from New York to Berlin is only one example of Volkswagen’s organic approach to arts sponsorship since 2011. The company is proud of its open, discursive relationship with MoMA, which, for example,led to the Expo 1 exhibition about the environment and global warming at MoMA PS1 in 2013. With Volkswagen’s help, that exhibition went on to Brazil and China, which led to the Yuz Museum in Shanghai installing its own permanent Rain Room installation. Indeed, the “Expo 1 approach” to exhibition-making learned in New York has taken root in Berlin. Both sides are free to suggest ideas for shows, but the museum gets free rein in all curatorial matters.

Alongside the V&A in London, Von Maltzahn’s focus at the moment is on China. Volkswagen is not seeking a long-term partnership with one institution. For the moment, it sees the training of curators as more important. It is a chance to make use of the network of partnerships Von Maltzahn has built. “We’re not into collecting museums. We want to deepen the resources of our network—not so much in our interest as in that of society,” she says. “We took ideas about sponsorship and arts education from New York to Berlin. Why shouldn’t we use our network to help connect cultures by enabling Chinese art students to learn about curating?” Volkswagen wants to give China’s would-be Kittelmanns—perhaps from Beijing’s Central Academy of Fine Arts—a chance to help learn their craft in New York, Berlin, Wolfsburg, and now quite possibly London too.

“Volkswagen should be applauded for its long-term commitment to an arts world where we still see a lot of short-term involvement,” says Ben Hartley, the founder of New York-based Orama Consulting, which has advised BMW and the Guggenheim Museum among others about corporate sponsorship and strategic planning. He thinks Volkswagen has evolved “smartly” from a regional and national arts sponsor to a global one, and he doesn’t see this status challenged by the emissions scandal. “Of course, arts organisations are always assessing their partners. But you always have to be mindful of the fact that the arts have long been a friendly port of call for corporate largesse.”

Kittelmann admits he has wondered about the emissions scandal miring his corporate partner, “But that’s no reason to call our partnership into question,” he says. “You could argue that this will encourage Volkswagen to demonstrate even more social responsibility.” It was Kittelmann, says Von Maltzahn, who proposed a Kopisch show last year, at a regular exchange of ideas. She admits she hadn’t heard of the artist until then, but that Kittelmann swayed her. “Kopisch was a person of his time who engaged with what the future might look like. He was a painter, innovator and explorer,” she says. “We liked that idea a lot.” Think of all the people who’ve now seen Pontine Marshes at Sunset, she muses. “All those people who had never heard of a man called August Kopisch.”

• Volkswagen is supporting What Is Art For?, the third in a series of discussions to mark The Art Newspaper’s 25th anniversary, at the Museum of Modern Art, New York, on 12 May (6.30pm-8pm). For more, see p3