As a major show and opera come to London, the South African artist reflects on his multimedia installations’ disparate influences, from his homeland’s politics to Wallace and Gromit

William Kentridge combines the political and the poetic in allegorical films, charcoal drawings and large-scale installations combining film, sound, music and sculptural objects. He deals directly and obliquely with the troubled history of his native South Africa. Now 61, he first attracted international attention in the early 1990s with a cycle of films examining his homeland’s political upheavals through the characters of the capitalist property developer Soho Eckstein and his foil, the poet/lover Felix Teitelbaum. The series established his distinctive stop-motion animation method, involving the repeated making, erasing and remaking of expressionist charcoal drawings while preserving every addition and erasure. Kentridge studied mime and theatre with Jacques Lecoq in Paris and continues to work with theatre and opera. In September, Kentridge has a major exhibition at the Whitechapel Gallery in London and he will direct Berg’s Lulu at the English National Opera in November.

The Art Newspaper: The Whitechapel show is entitled Thick Time and it includes the installation The Refusal of Time (2012), a 30-minute, five-channel multimedia exploration of theories and notions of time. Why the decision to foreground this theme?

William Kentridge: It’s really about the expansion and contraction of time in the studio. The world comes into the studio, it then gets taken apart and worked on, and then gets sent back out into the world. So one of the things that happens with time is that it gets expanded and stretched. If one’s doing an animation, in the most literal way a gesture that may take two seconds to draw may take two days to animate, and so the normal flow and invisible sense of time gets broken down and turned into numbered systems and the frames of a reel of film. So there’s a lot about the different ways of materialising that kind of transformation [of time] from its invisible evanescence through which we move, into something material, whether it’s a roll of film or charcoal erasures on a sheet of paper.

The Refusal of Time looks at string theory, black holes and the theory of relativity, among much else. It’s a mindboggling mélange of ideas in a single piece.

It is. But it is about the use of some of these metaphors of science rather than trying to say anything about the science itself. It is saying that the metaphors that science uses are always about deeply human conditions. For example, the black hole that is part of the mathematics of deep space, gravity and cosmology is really a metaphor about our fear of dying. Once we die is everything forever lost, as it is into a black hole? Or is that too painful, so we have to believe there is some trace of ourselves—whether it is in other people’s memories or in other forms—which for scientists is what they describe as information being kept in strings around the edge of a black hole? Scientists may be talking about pure science, but they are always talking about their own fears and desires as well. That’s the interest in working on time, not because I’ve got anything to say about the science, except how connected it is to our deepest emotions. The maths sits on top of that. 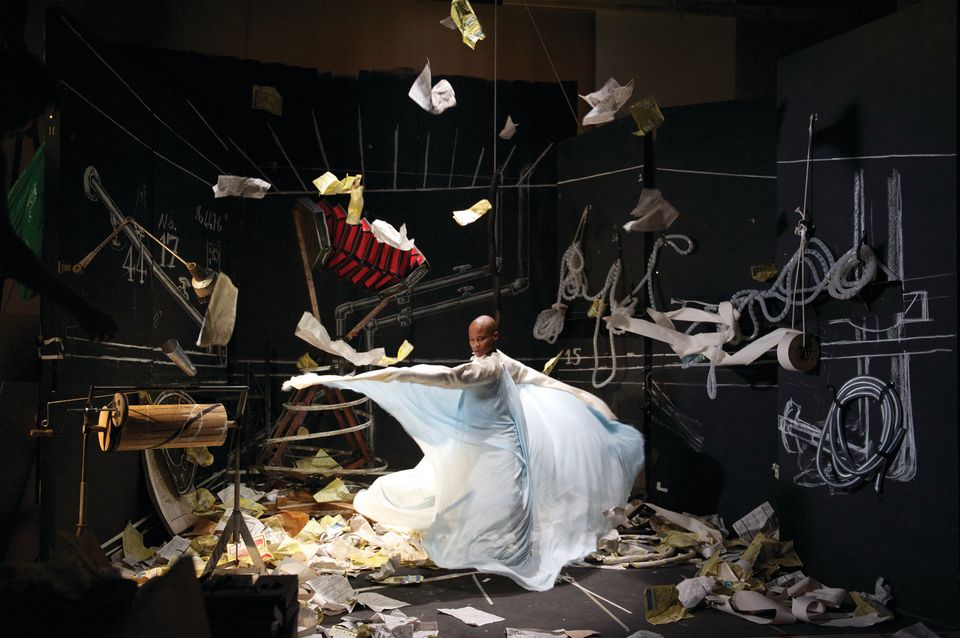 The Refusal of Time (2012) examines the expansion and contraction of time in the artist’s studio. Photo: Johannesburg Art Gallery

At the end of The Refusal of Time, you appear, sitting inside the black hole.

Yes, and that’s where we all are, as we know.

The absurd is central to your work. It punctures pomposity but seems different to making a joke: it’s also deadly serious.

The absurd is a very important category. As opposed to the funny or the stupid or the humorous, the absurd points to some break in the central part of logic. Then with this broken logic we continue as if the logic had not been broken. So in The Nose—the opera [by Shostakovich] about the man who loses his nose—you take the absurd premise but then follow it through rigorously. There’s a lot in the world where we have an absurd premise and we follow it through rigorously—for example, in Dr Strangelove and the world of nuclear warfare—so that the category of the absurd is for me a very contemporary and important one.

I see it too in your film Seven Fragments for Georges Méliès (2003) in the Whitechapel show—you also cite Nick Park’s A Grand Day Out, where Wallace and Gromit visit an edible moon made from cheese.

I love A Grand Day Out—and The Wrong Trousers is one of the great films of the last 50 years. But I was interested in saying that you travel all the way to the moon, and where do you find yourself? Back in the studio. And that’s as foreign a place as one ever needs to be. And I know that Wallace and Gromit are always happy to be back home in Lancashire afterwards.

What is it about the films of Georges Méliès that makes you return to them?

The great thing about the Méliès films is that we see how they are made. You can see the technique he’s using but they are still kind of fabulous and what you mainly get is his sense of excitement of exploring and discovery: the first person to be running films backwards; to be shifting time by looking at what happens if time could go backwards or, if you stop time, making adjustments to the world and then continuing, seeing all the performances of transformations one could then enact.

How influential was studying physical theatre with Jacques Lecoq in the 1980s?

I think I learned more about drawing from studying human movement at the School of Movement and Mime than I did from any art lessons.

I read that when David Elliott, the then director of Modern Art Oxford, wanted to show your films rather than your drawings in his 1990 show of South African art, you were insulted.

I was more conservative than anyone. I thought drawings were art and films were films and the idea of putting a film on a wall of an art gallery was anathema and shocking. I was like a real old conservative and I had to be dragged kicking and screaming to understand what I had been doing myself. I am always grateful for other people pointing this out; I never trust my own good ideas because all the things that have been of interest to me are less good ideas.

The specificity of South Africa appears to be embedded in your work, even when it is not overtly referred to.

It is. As someone who has never moved out of their home town—I’ve lived here for 60 years and within a few kilometres of where I was born—it comes in both conscious and unconscious ways. Conscious ways in the musicians, the composers and the vocalists that I work with, but also in the way that the movement and the people performing have a very particular quality. The landscapes are very much South African landscapes: even when I’m drawing a Flemish landscape for a production of Woyzeck it’s very much the landscape outside Johannesburg.

Growing up as a white, Jewish South African with parents at the heart of the struggle against apartheid must have played a part.

It gave me a kind of belief in bastardy, in mixed traditions, in societies made up of very different impulses, of the fundamental instability of the world rather than its stability and of the central point of the absurd. I mean, what could be more absurd than the racial laws of apartheid South Africa for those 40 years? But they were followed through with great assiduity and cruelty. So in a way the absurd was lodged at a very early age in understanding the unnaturalness of the society I was in. You’ve been called the patron saint of ambiguity. How do you feel about that? How do I feel? Ambiguous: I like it and I don’t like it. I wish some things could be much clearer that one holds onto without any doubts. I’m wary of certainty, but I’m very weary of uncertainty, also.