The artist trio of Rokni Haerizadeh, Ramin Haerizadeh and Hesam Rahmanian on the joys and challenges of living, working and collecting art together

Stepping into an exhibition by the Dubai-based collective of Rokni Haerizadeh, his elder brother Ramin Haerizadeh and their friend Hesam Rahmanian is like entering a Surrealist daydream. Stacks of obscure found objects, monster-like figures, flashing television sets and walls and floors of swirling patterns fill the men’s signature installations, which also often feature works by fellow artists and items from their vast personal art collection.

The trio’s immersive rooms are an extension of their chaotic but creative shared domestic and studio spaces, in which their lives and artistic practices are intertwined. The group started working together in 2009 when the Haerizadehs, originally from Iran, settled in Dubai and were joined by the US-born Rahmanian. The brothers moved when they began to fear for their safety in their native country, after collectors of their figurative and often provocative works were threatened by the police.

The artists, who are showing works at Art Dubai with their Dubai-based Gallery Isabelle van den Eynde, have exhibited widely since settling in the emirate, with solo shows in the US, Australia and Europe. In 2017, they created an installation for the Guggenheim Abu Dhabi that featured in an exhibition of items from the planned museum’s collection. Here, the trio discuss their projects during Art Week, the development of the Dubai art scene and why, for them, the process of making art is more important than the art itself. 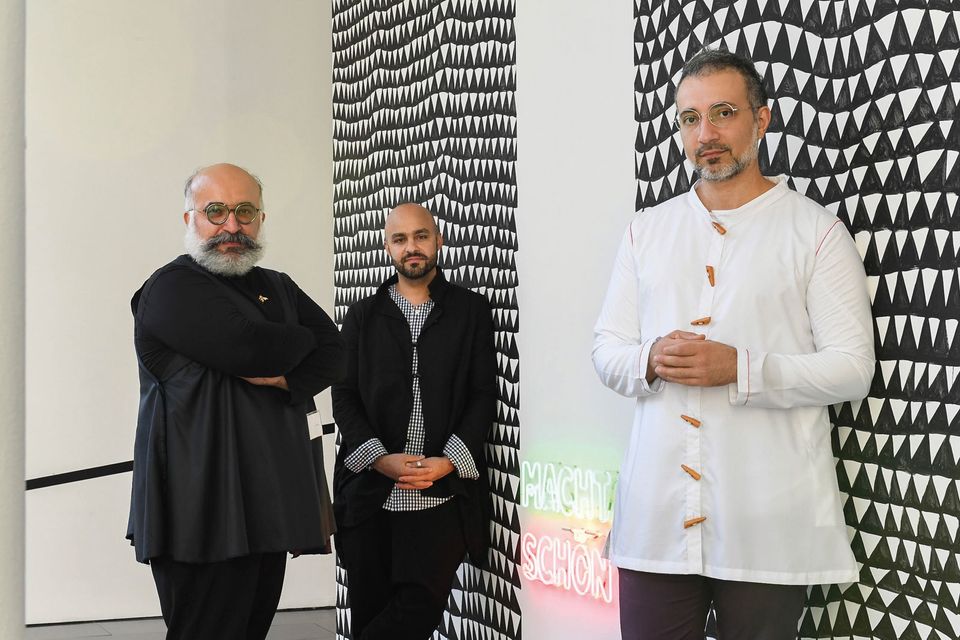 The Art Newspaper: You are part of Ishara: Signs, Symbols and Shared Languages at Alserkal Avenue. What is the show about?

Rokni Haerizadeh, Ramin Haerizadeh and Hesam Rahmanian: The concept of the exhibition is derived from a broad understanding of the meaning and use of language. Ishara [which is Arabic for “sign”] is taken here as the most basic form of communication, transcending language and its use in a society which may not have a specific lingua franca (common language) for people to converse in.

The exhibition includes works by local emerging artists for whom you act as mentors. How have you worked with the artists, and what works will you be showing yourselves?

We look at an exhibition as a collective act, with each part having a function in making the whole system work. For this show, we were taken on board after the artists had been selected by the UAE Unlimited curatorial team and from there we got together with everyone—from the executive team to the artists—every week to exchange ideas and have detailed discussions. By this process, rather than mentoring the artists, we accompanied them in looking at their own work from different angles and expanding their horizons.

One of the main ideas we worked on was that art is what lies at either side of language, not the language itself—one side being mathematical and formalised and the other side being open and creative. This allows language the flexibility to move around freely and to describe either side, therefore creating poetry.

Based on this, the collection of our own works we have included in the exhibition contains a series of works of art and everyday objects that are put together to form visual poetry. Each piece included was either presented subliminally to the participating artists or openly discussed in relation to their own practice during the development process.

You are also taking part in this year’s Global Art Forum at Art Dubai. Titled I Am Not a Robot, the event focuses on automation and its ramifications for art. How are you engaging with this technology?

We have used some automation in our work: for example, in our exhibition The Maids in Barcelona [see box] back in October 2017. However, behavioural automation in people features more strongly in our work. One of our ongoing discussions is about how systems that create an automatic behaviour can develop into autonomy and how it is very hard to know in advance what the effect of this process would be.

What interests us is how social constructions as a system are pushing man and machine to become one, to the extent that either may become the other, and even surpass the threshold of a clear distinction.

Can you talk us through the process of creating your collective works?

In working together, we become one creature with multiple critical eyes. Critical not in the sense of judgement, but in a more analytical way, by looking at things from different angles. We work based on augmentation rather than reduction and pile the ideas on top of each other until an agreement is reached. Sometimes we don’t even agree on anything and the result is based on disagreement. Generally, the process is more important to us than the result. 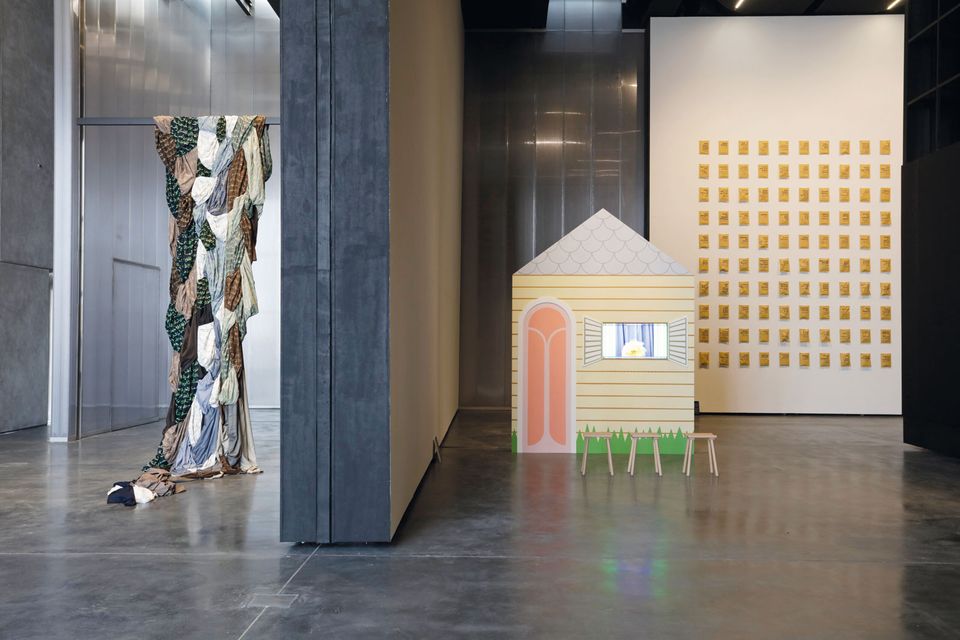 You also all share a studio space and a flat. How do you know where the collective ends and you, as individuals, begin?

When we use the word “we”, it doesn’t always refer to the three of us, but to everyone who has collaborated with us on a given project. This can range from family and friends to housekeepers, carpenters, tailors, engineers, artists and everyone else who may have contributed to the work.

In the past nine years that we’ve lived in Dubai, we have developed a space which is a home, studio, library, cinema, research centre and museum, within which we follow a self-designed, malleable discipline focused on finding a new form of togetherness. Our daily life, be it individually or collectively, is an ongoing contemplation on the performance that is created between us in interaction with this space.

You have been living in Dubai throughout a period of rapid artistic and cultural development. What do you think is the best thing about the art scene here and what are its main challenges?

The best thing about our experience here is the forward-looking approach in culture and, consequently, the art scene. In such an environment, art can have an important place in helping to build society, by highlighting the best practices and avoiding some of the mistakes made in the past.

The biggest challenge, as it would be in any other place, is to search not for what fits into what has been predefined as art, but for something that breaks the rules and creates a new understanding of our time.

What has been your experience of living and producing work in Dubai?

We are happy to work in a place where our work is appreciated, and where we can continue our practice without unnecessary disruption.

You are also collectors. What do you like to collect? Do you have any favourite artists?

We collect work that we feel somehow is a representation of who we are at that moment. Some of our favourite artists now are Phyllida Barlow, Augusto Boal, Mieko Shiomi, Robert Filliou and Sonia Boyce.

How would you describe your practice in five words?

Being There Together Is Enough. 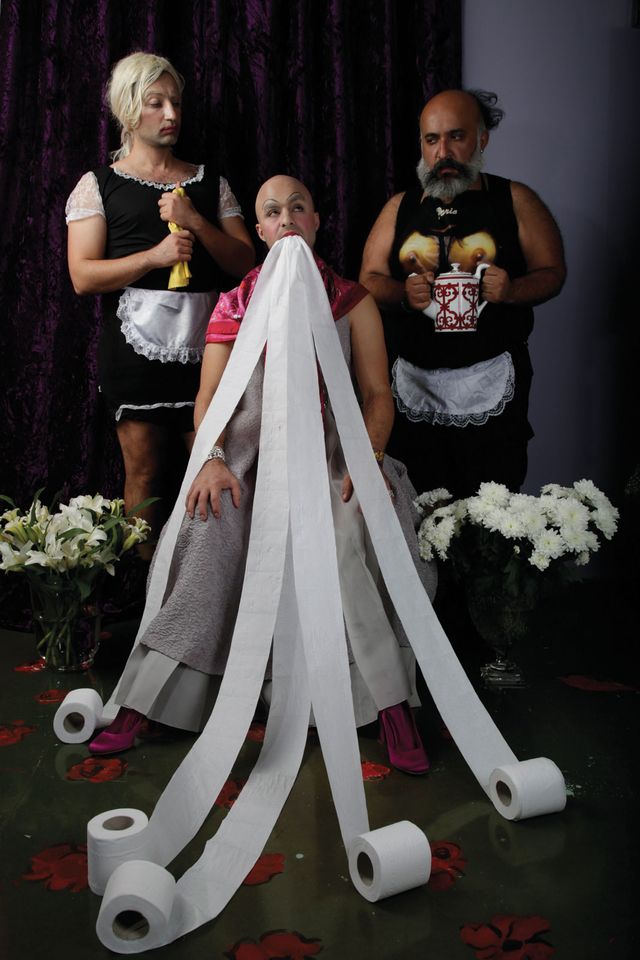 The collective won the €50,000 Han Nefkens Foundation Macba Award for Contemporary Art in 2015, which led to an exhibition responding to the city of Barcelona. The trio invited other artists to contribute and among those who took them up on their offer were Joan Baixas, a renowned Catalan puppet artist; Niyaz Azadikhah, an organiser of sewing workshops for women in Tehran; and John Cole, a robotics engineer. The fruit of these collaborations, displayed in the exhibition, included a motorised puppet that reacted to visitors and revealed a patchwork of embroideries made by Iranian and Afghan female refugees. 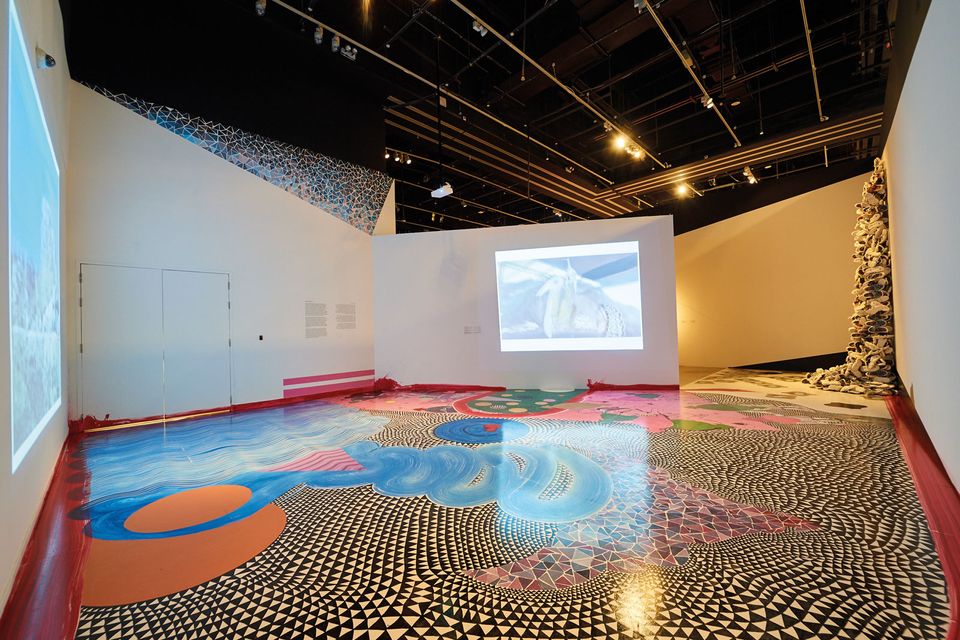 For the second display of works from the planned museum’s collection, the trio were commissioned to create Another Happy Day (2016-17). This immersive installation brought together works by the collective and other artists such as the Tehran-based Nargess Hashemi and Laleh Khorramian, who lives in New York. Split between three rooms, the show featured an animated video about migration, From Sea to Dawn (2016-17), made from almost 3,000 news footage stills. 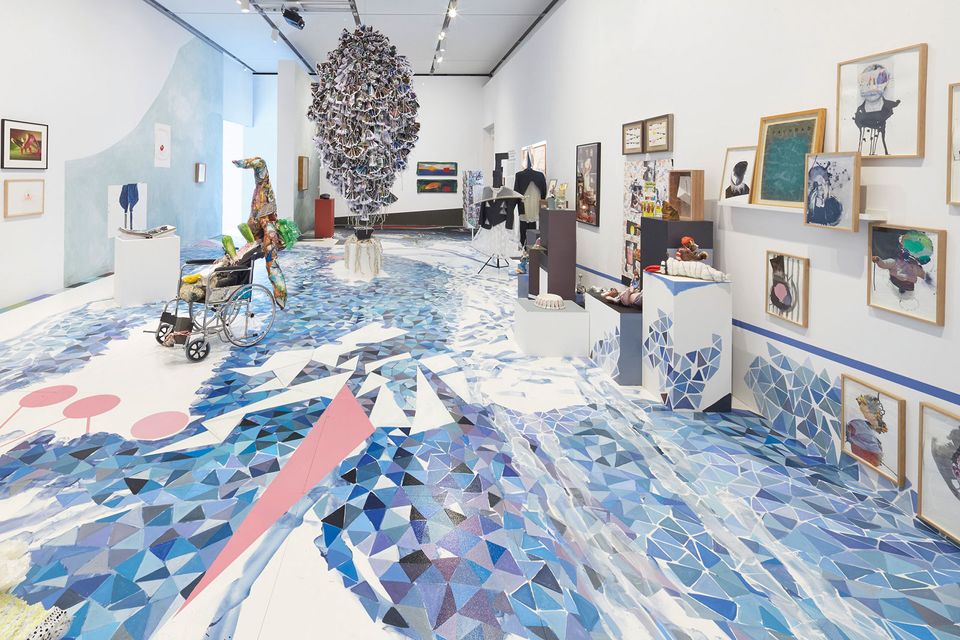 Spills and thrills: the 2015 Birthday Party show at the ICA in Boston Charles Mayer Photography

The first museum exhibition in the United States by the Haerizadeh brothers and Rahmanian borrowed its title from Harold Pinter’s surreal comedy, written in 1957. They launched a precursor to their show with a party-cum-performance at Gallery Isabelle van den Eynde in Dubai, for which they wore costumes made of long prayer robes that obscured their vision. Spilling paint across the gallery floor, the trio unwrapped gifts and made sculptures from the contents. The subsequent installation in Boston included remnants from the Dubai performance, along with a selection of works by other artists such as Louise Bourgeois, Ree Morton and Hassan Sharif.