All tastes catered for in GCC's talk show

The art collective is bringing daytime TV, complete with a celebrity chef, to this year’s edition of The Room—Art Dubai’s interactive dining experience 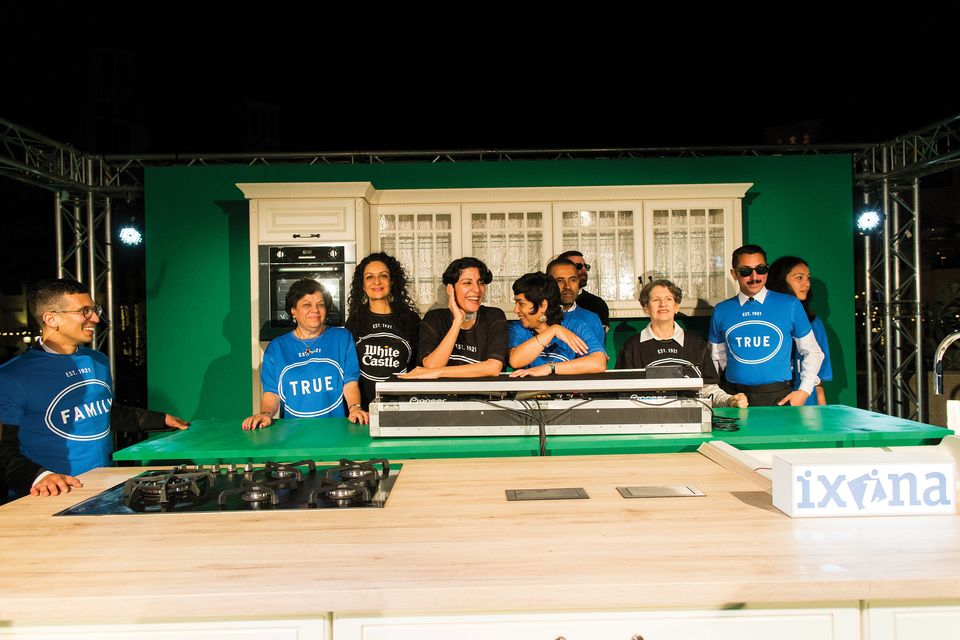 The eight-member GCC has certainly been busy in the five years since it formed at Art Dubai in 2013. Comprised of artists, designers, musicians, writers and architects with strong links to the Arabian Gulf region, GCC (a reference to the Gulf Cooperation Council) has, among other initiatives, held a highly productive summit in Switzerland, developed a brand identity for a fictitious Gulf nation complete with branded pens, and created an installation for the Berlin Biennale in 2016 that explored Quantum Touch therapy and the adoption of the positive energy movement by governments in the Gulf.

Represented by New York’s Mitchell-Innes & Nash, Project Native Informant of London and Berlin's Kraupa-Tuskany Zeidler, GCC explores the use of branding and other corporate strategies by governments to sanction their power.

We spoke to the group about its project for this year’s Art Dubai, as well as what it is like to be part of a collective with its members living in different cities across the globe, from New York to Kuwait City.

The Art Newspaper: What is the idea behind GOOD MORNING GCC and what can visitors to Art Dubai expect to see?

GCC: GOOD MORNING GCC uses the tropes of daytime television talk shows across the Arab world, alongside references to Nam June Paik’s [satellite broadcast] Good Morning Mr. Orwell [1984], Glenn O’Brien’s [1978-82 public access television show] TV Party, Chris Burden’s commercials and other artists who have used television’s potential to communicate to a wider audience. Arab TV networks have popularised the talk show format—which ranges from political to conversational—and cover many of the topics we are addressing in our programme. They reflect the trends and interests of the region, while creating a sense of connectivity.

You have segments on a variety of topics.

Each time slot corresponds to a typical segment on a daytime talk show, ranging from lifestyle and fashion to health and wellness. We have gathered practitioners to give audiences hands-on demonstrations, from makeup tutorials to holistic bodywork sessions. Equally important is the evening entertainment [from 21 to 23 March, which consists of a series of] parties DJ’d by Telfar, Asmara, DJ Hosh, Venus X and Total Freedom.

And what is the celebrity wedding singer and TV chef Sulaiman Al Qassar’s role in the project?

An icon of food and performance, he was chosen for his status as a popular personality transcending many social limits. On a personal level we are huge fans of his approach to cooking and the personage he presents on his show. He is performing a cooking demonstration on a stage design that reflects a backstage, behind-the-scenes aesthetic. This televisual cooking-station set piece will be the anchor for TV segments, performances and parties taking place during the fair. The overall experience of the set will develop over the fair’s duration as the public are able to use it and interact with the props, furniture and scenography. 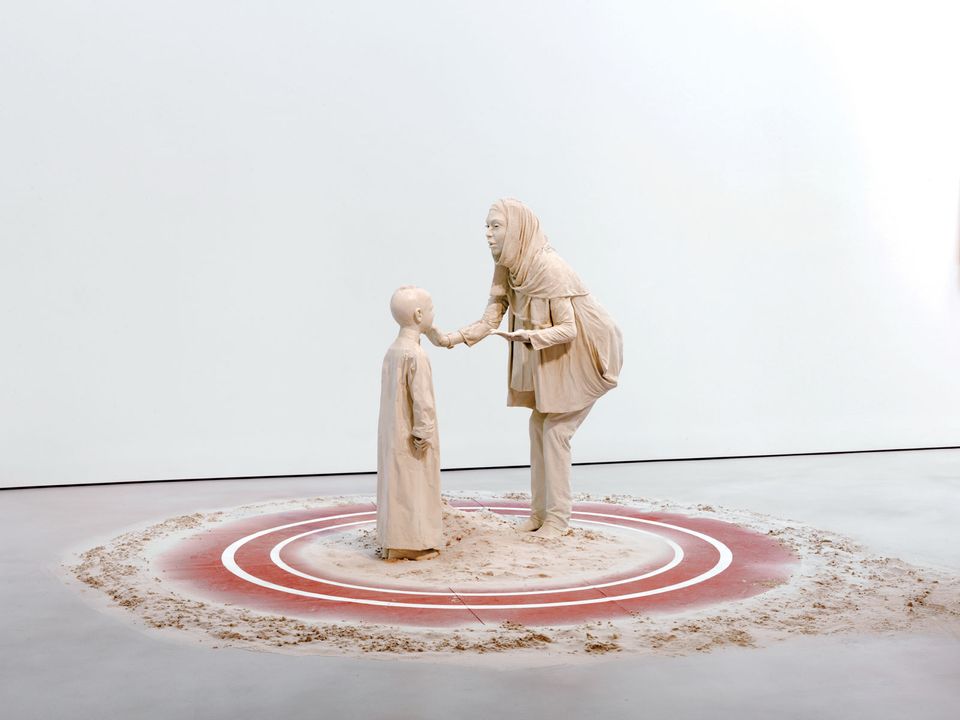 Positive Pathways (+) (version II) (2016), from a series looking at the adoption of “positive energy” therapies by governments in the Gulf region. The UAE, for example, has a minister of state for happiness GCC, courtesy of the artists and Mitchell-Innes & Nash, NY; photo Adam Reich

GCC formed at Art Dubai in 2013. Could you tell us how that came about?

We had known each other socially or had worked [together] in smaller clusters prior to the formation. Before forming GCC, a few of us were approached to collaborate on a major state-sponsored art project, and the rest of the group was brought in to participate on the proposal. Our collective proposal addressed the zone where culture meets the state’s image-management goals, especially in the context of competitive international art biennials. It was politely rejected and at that point we realised we shared many ideas. We also knew that we work well together, and we had different individual resources that, when pooled, would give potency to what we have to say.

Our projects are outcomes of conversations, and when we’re not working towards a specific project, we’re maintaining that very lively ongoing conversation.

Diplomacy and branding are recurring themes in your work. Why have you chosen these areas as a means to explore culture and politics in the Gulf?

Growing up in the 1980s and 1990s in Bahrain and Kuwait, each one of us experienced the aural and visual manifestation of regional unity. By means of a concerted transnational effort, our governments expected us to consume what it meant to be “citizens” of the GCC [the Gulf Cooperation Council].

You’ve been quoted as saying your work deals with global issues disguised in Gulf clothing. Can you elaborate?

Our work is a response to the realities of the region where we grew up. Here we are able to examine strategies that governments share with corporations to encourage certain behaviour and to sanction power. The ramifications of this reality affect an area beyond the limits of its borders, so in this sense we have an overarching “theme” to our work. At the same time, we try to avoid heavy-handed didactic narratives.

An example of this was our show at the Sultan Gallery in Kuwait in 2015. The recent branding and rebranding campaigns in the Gulf are incomparable to the almost-rustic, homespun efforts of the 1980s and 1990s. Today, you see multibillion-dollar campaigns, led by foreign consultants, to both project a manicured image of a business-friendly Gulf to the world and to curate a citizenry fit to occupy this new environment.

Since the loss of their pre-oil world, Gulf governments have perpetuated what the writer Jonathan Meades calls “sightbites” of the past. Traditional garb has taken on corporate connotations; “heritage villages” have sprung up, acting as avatars for the demolished cities; and ancient activities such as falconry have taken on second lives as settings for Instagram selfies, where young men have enthusiastically curated their identities by adopting the sanctioned sightbite of Bedouin life for their virtual personas. This is called “heritage revival”. We were interested in approaching it from an aesthetic point of view, and yet a great deal of our conversation pertained to the highly political heavy-handedness of it.

Is it challenging to have GCC members living in several different cities?

It can be, but we use online collaboration tools to facilitate communication and project management. It’s rare for artists who work primarily in a solo way to co-author works, or to present work together under new auspices. It’s more common to generate a group show, or for artists to participate in collective public actions that bring together the wider community. Our varied skillset enables us to work across medium and genre, and at the same time we tend to gravitate towards certain types of work. The emphasis is always on the work itself, the ways in which it came to be, and not on any one individual in the group, or certain materials or genres. 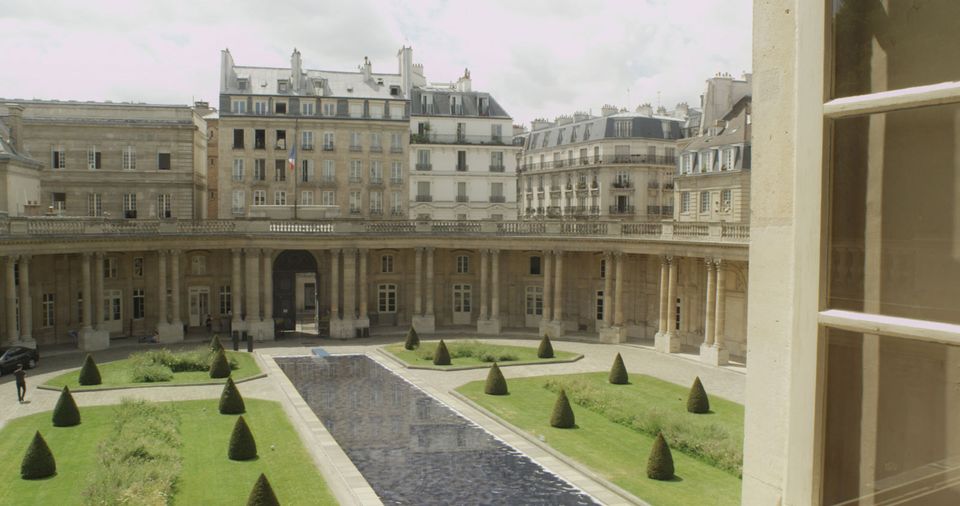 This video was inspired by the furore caused when a sheikh from the Gulf bought a hôtel particulier, or townhouse, in Paris for his personal use. The sale prompted speculation in the French press of an impending, over-the-top “Las Vegas-style” restoration of the historic property. The GCC says: “In previous work we’ve dealt with ‘the government’ in a broad, vague manner, while here, even though it’s still vague (there are no visible characters/figures in the film), we are entering the intimate, inaccessible world of the private house. There is no grandstanding here, no handshakes, no photo ops.” Shot as if the viewer were looking through a peephole, objects including a WiFi router, an exercise machine and a car lift have been digitally added to footage as “sort of a ‘foreground’ to the historical interior’s ‘background’”. The piece references the act of choreographing cultural myths in the Gulf by means of “heritage engineering”—in which aspects of culture are singled out by governments to create positive narratives. Stills of promoters of “positive energy” movements, taken from YouTube videos, have been translated into large-scale reliefs that resemble the kind of carved friezes found on ancient buildings. 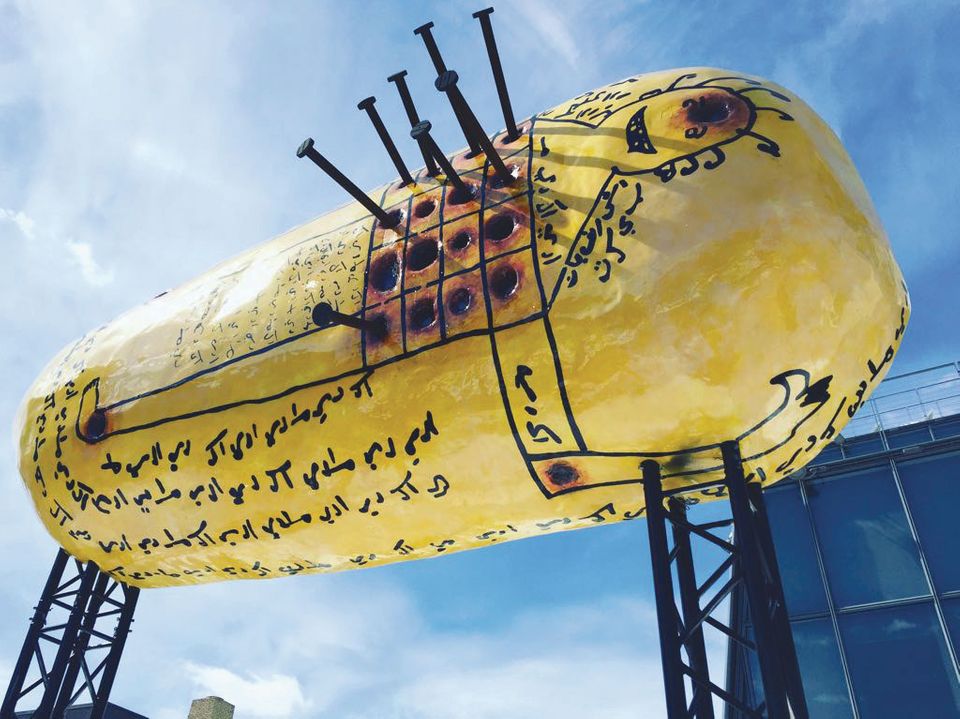 Shown at the 2017 Whitney Biennial, this is a super-sized version of a rotting melon, covered with talismanic writing and pierced with nails, discovered on a beach in the United Arab Emirates in 2016. Police seized the object and a cleric was brought in to destroy it. “The work addresses conversations related to sorcery, positive energy and hopelessness,” GCC says. “It considers magic as an anarchical and extremely negative point of resistance to the status quo. However, magic is relegated to the ‘dark’ arts, is private and targeted towards individuals. By repositioning it in a highly visible and public venue as an exorcism for America, such sanctioning usurps power and instrumentalises it.”