Known for this dangling horse and gold toilet, the Italian artist's exhibition is in the unlikely setting of Winston Churchill's birthplace 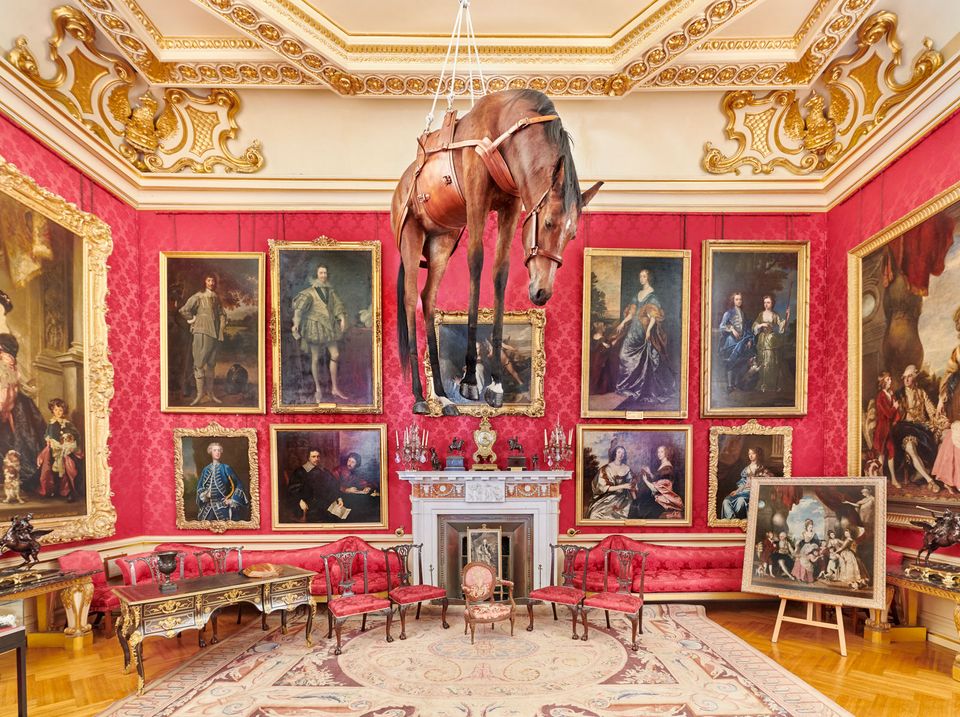 Nothing is sacred to Maurizio Cattelan. Since the early 1990s contemporary art’s most high-profile provocateur has mocked power and authority both within and beyond the art world. For his 2011 Guggenheim New York retrospective All, Cattelan suspended the entirety of his iconoclastic output from the oculus of the museum’s central rotunda, including life-size waxworks of a praying schoolboy Hitler, Pope John Paul II struck down by a meteorite and JFK barefoot in his coffin. Among this dangling catalogue raisonné were the tragicomic taxidermied animals for which he is known, such as the suicidal gun-toting red squirrel and Novecento, the dangling horse with elongated legs that was one of Cattelan’s career-defining works when he first showed it at Castello di Rivoli in Turin in 1997. At the opening of All, Cattelan announced his retirement as an artist, only to return with America (2016), a fully functioning 18 carat gold toilet installed in one of the Guggenheim’s public restrooms for a year. Now America is to be plumbed in to Blenheim Palace in Oxfordshire as part of Cattelan’s first solo show in Britain in more than 20 years. 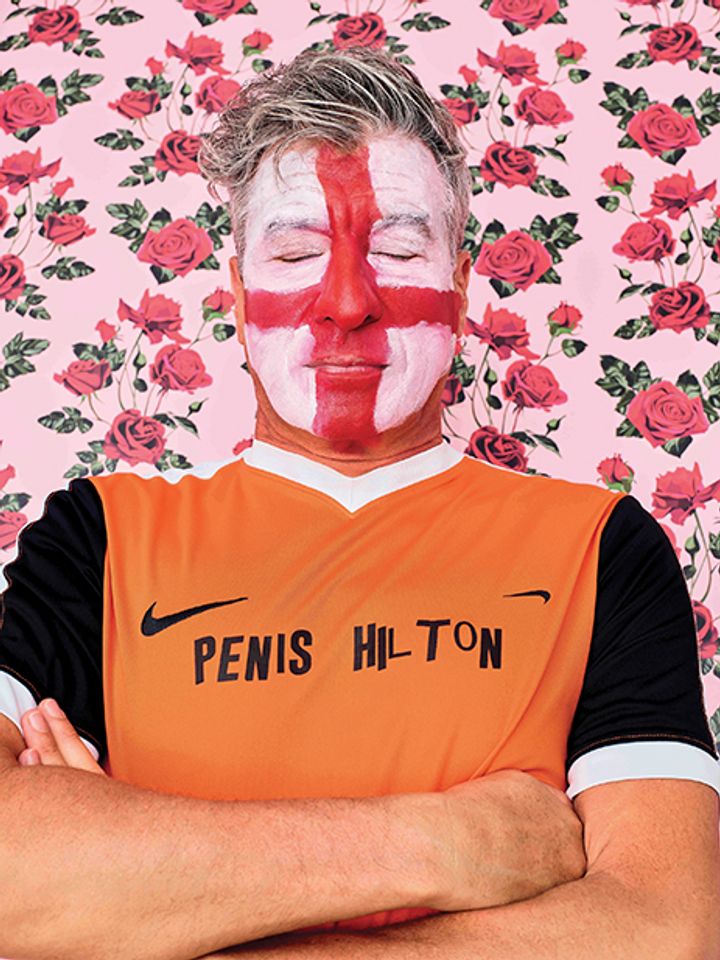 The Art Newspaper: As the seat of the Dukes of Marlborough and Winston Churchill’s birthplace, Blenheim is the stateliest of stately homes. Why did you want to show your work there?

Maurizio Cattelan: I’m a slow, not impulsive, decision-maker. I had the invitation for the show a couple of years ago and was still thinking of it when, during his official UK visit, Trump met Prime Minister Theresa May there, instead of London. At that point, I could not be outdone.

What criteria did you use in selecting the works for Blenheim?

There isn’t a specific criterion in selecting the works for this kind of exhibition. You start from a focus point, and from that you proceed circularly: you include a work that links to the previous one you thought of, as if you were sewing. At the end of the thread, you find yourself at the starting point and you can close the circle without even being aware. The most important thing is that you’re not sewing alone: you keep conversing with the local team, with your friends, and this makes the circle perfect. I recently realised everything good I’ve done in my life has mostly been thanks to teamwork. 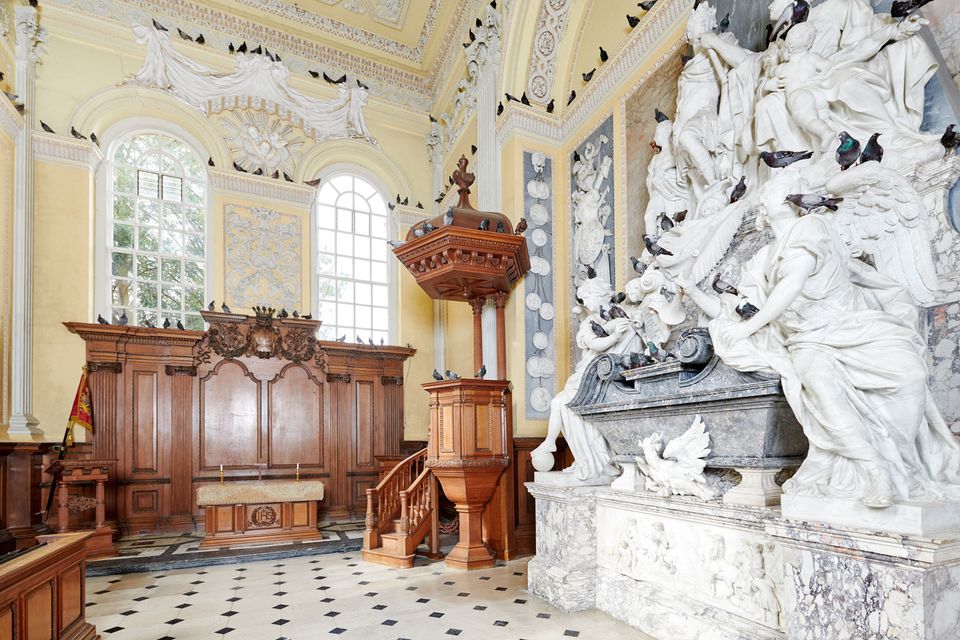 Cattelan's taxidermy pigeons called Others (2011) in the chapel © Tom Lindboe

What influenced your placement of works such as the pigeons in the chapel, Novecento in the state rooms and your self-portrait Lessico Familiare (1989) among the Marlborough family photos?

Old houses are always full of furniture and ghosts, and the only way to deal with them is to enter into a relationship; you can’t avoid or ignore them, because you are the intruder, not vice-versa. From place to place you menace their territory—and I’m sure that in this case Hitchcock would approve—or you gently get in symbiosis, as a chameleon. The context definitely influences my choices but I’m always trying to avoid the obvious, to open up a dialogue without rooting in the place completely. The aim is always to make the visitors question whether that work has always been there.

Were your new works—the flags and the taxidermy crocodile—made especially for Blenheim?

The pathways of flags leading up to the palace entrance can be considered the overture of the show. They’ll work as a visual title: the actual title, Victory is not an option, is as controversial as the flags are. They make you wonder about how the meaning of victory and failure can change depending on which side of the fight you consider them. The crocodile, as a real one would do, was navigating in the depths of my mind for a long time, until I saw the rooms of Blenheim and it peeped out. I found the—possibly perverted—idea that those walls have seen so much history, and now they’re forced to testify to my show, very thought-provoking. 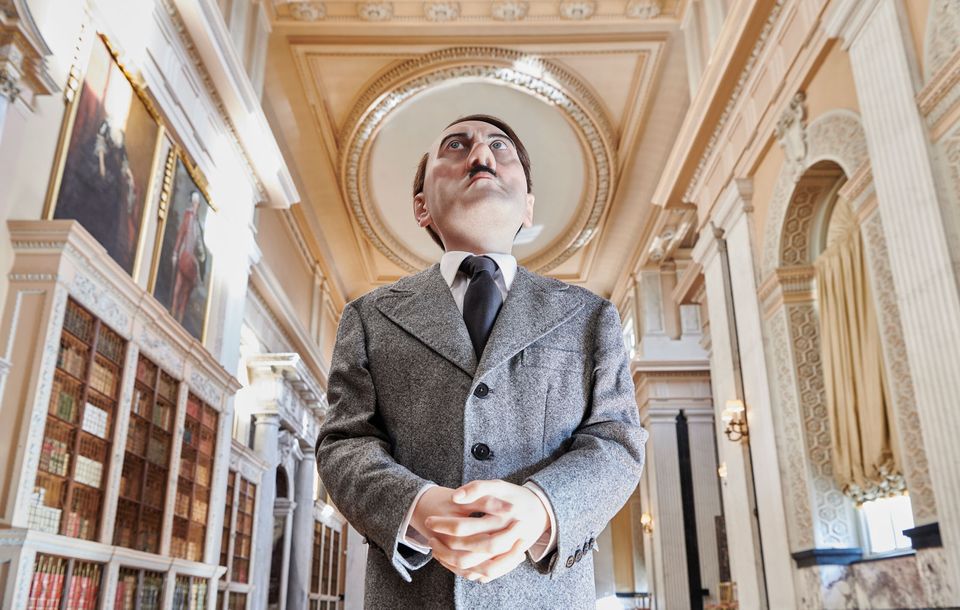 Two of your most notorious works—Him (2001), the praying boy Hitler, and La Nona Ora (1999), the meteorite-felled Pope—strike provocatively at contentious symbols of masculine power but also invite us to feel sympathy for them.

It’s extremely important for me that people see under and further than the surface and appearance of my works. To function well, an image must be synthetical and even shocking in certain cases. But at the same time, very good works—and I’m not necessarily including mine—have much more to offer than what meets the eye. In that space of discomfort between surface and deepness, there’s the secret of a masterpiece.

You are often described as a prankster. Do you weary of not being taken seriously?

You know the story of Cassandra, cursed to utter prophecies that were true but that no one believed? With artists and their art, it’s more or less the same, and, I promise, you never get used to it. 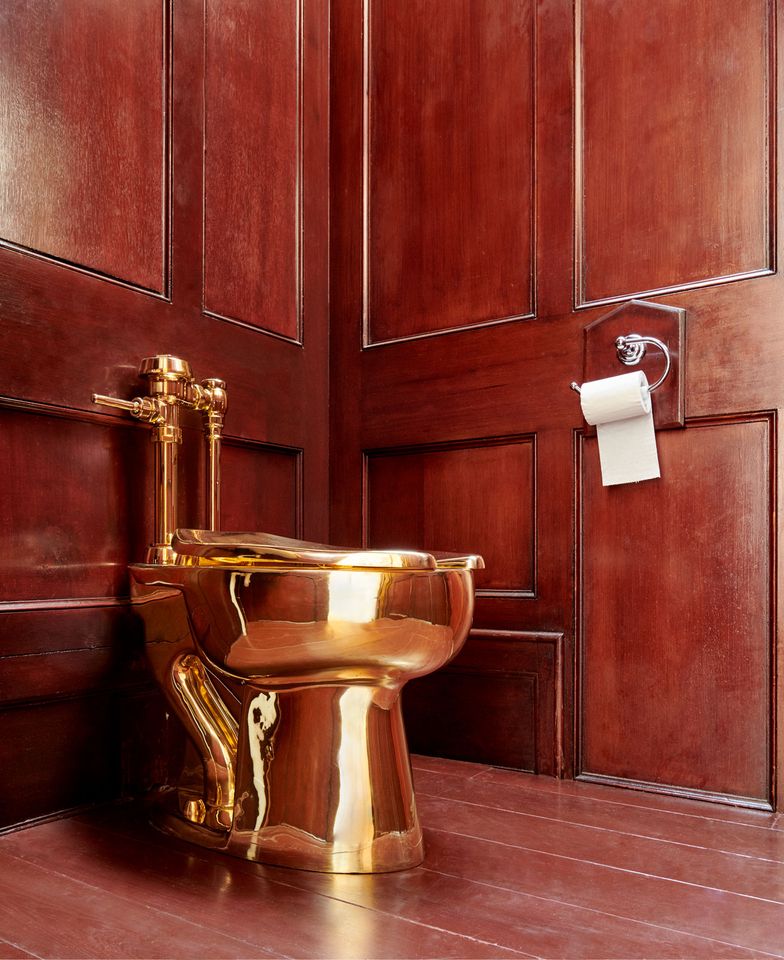 Why did you announce your retirement in 2011 and then make a comeback?

It’s a troubled story, mine with art, but the relationship is by far the longest I ever had. It happens that even the best and strongest couples make mistakes and look for a break- up. But in the end, true love always wins.

In such a troubled era, what do you believe that art can say or do?

I have faith that one of those moments in history where you can daily breathe hope and faith in the future will come soon, after these past decades of crisis and confusion. As humans, we continuously raise the bar of our goals and the possibility to overcome boundaries, thanks to inspirational images coming from the arts. In 1865 Jules Verne’s From the Earth to the Moon was a science-fiction novel; a hundred years later it became a historical fact.

You’ve designed furniture, run a gallery, co-founded a magazine and curated exhibitions. Are these different activities part of being an artist?

Studies have shown how being trained in a specific field can help to solve problems of a completely different scope. I read somewhere of an acrobat who became a ski champion; if you think of it, it’s quite obvious. Making a magazine improves your feeling for iconic images and editing skills; designing furniture opens up a world of possibility for your works to also be seen from a useful side: an opportunity that most of the time is aborted but sometimes it’s not—for example, with America. Running your own non-profit space keeps you humble, while curating shows makes you feel like God but at the same time very fragile, because as an artist you’re always also on the other side.

Now you are an acclaimed international artist, is it still possible to be a provocateur?

As an artist, nuances are your duty. You should avoid making things easy. You should aim at suggesting contradictions: don’t erase it or deny it, but let it in and embrace it. Otherwise you’re making propaganda and product distribution, and that’s equal to the death of the art.