Interview with Pepe Mar on his work safeguarding queer histories 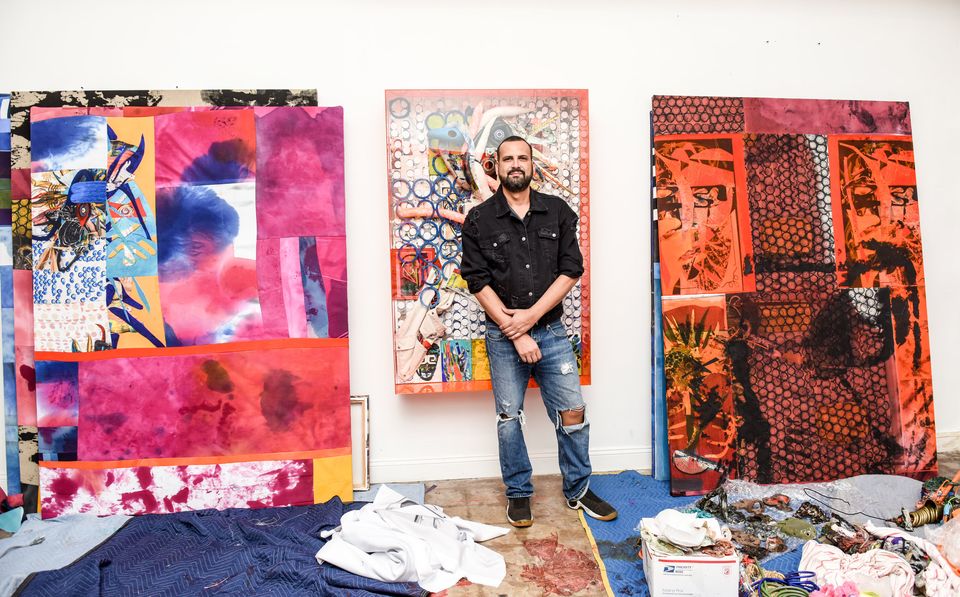 The Mexican-born artist Pepe Mar came to Miami for his MFA at Florida International University in 2012 and stayed in the city, where he continues to live and work. Varla TV, his project for the Meridians sector at Art Basel in Miami Beach, is a tribute to the late painter and drag performer Craig Coleman, who died from complications due to Aids in 1994. The large-scale collaged painting includes printed and painted fabric decorated with news articles and club flyers originally created by Varla that Mar has manipulated. The artist talked to us about the work and how it fits into his exploration of Miami Beach’s overlooked queer history.

The Art Newspaper: You are expanding your Deconstruction installation, an homage to the late drag queen Varla (aka artist Craig Coleman), shown first at the Frost FIU museum. What about Varla inspired you to create this homage and how will expanding it change the meaning/experience of this work? What will you be adding to it to size it up?

Pepe Mar: I had been hearing stories about Varla (Craig Coleman’s drag persona) since I moved to Miami in 2000 through friends, going out on South Beach. I had a particular obsession with a gay rag called The Wire, a resource back then for all the gay happenings in Miami. Later I would learn that Varla was a very active contributor to the magazine in the 1990s. One day I came across an issue from the 90s with Varla on the cover. This immediately captivated me and I wanted to learn more. As part of my practice for my collage and assemblage works, I go regularly to LGBTQ and other thrift stores. On one such visit, I found Varla’s actual paintings and purchased them. In an organic way I kept getting closer to Varla and her work and I just couldn’t believe I had found the paintings as I had, and I knew I had to do something with this amazing find. I had already done a couple of projects on the loss of safe queer spaces (Versus and Man of the Night). Varla TV unbeknownst to me was fast becoming my third major project on this subject.

Varla of course is a powerful symbol on the loss of an iconic era on South Beach. Having the platform of Art Basel Meridians to take Varla TV to a more expanded form has given me the opportunity to take the original 18-foot Frost Museum presentation to 40 feet and has allowed me to incorporate more of my assemblage and collage work as well as more archival materials that Craig Coleman’s friends have contributed to the project. In the end, this means the viewer will have more of Varla to experience which is what inspired this project. All her friends say she adored the limelight and that’s where her work and persona will be, in the limelight at Art Basel, in the middle of the art world, in a monumental project, 25 years after Craig Coleman’s untimely death.

You have an ongoing series that explores queer histories of Miami and other cities. Why do you think these histories have been overlooked and in what ways do you hope to revive them through your work?

South Beach is the central place which I have explored in depth since I came of age in those 17 blocks. It’s a particular place full of important queer histories, mostly unknown to the public or even to broader LGBQT audiences outside of Miami. Queer histories like all histories of the “other” have been traditionally overlooked by those responsible for writing history. As that begins to change, the responsibility actually becomes greater, not lesser, to safeguard and give a platform to queer histories. It’s more important now because as cities like Miami develop rapidly and safe spaces continue to disappear, a persona like Varla becomes all the more powerful. She was part of South Beach’s renaissance and she is part of the Miami Beach myth that people carry with them all over the world. I think museums have a unique opportunity to host exhibitions on these histories for younger generations such as the Art After Stonewall currently on view at the Frost Art Museum.

You often use collage and assemblage, what attracts you to this medium?

When I was a young student, I was very affected by the work of Robert Rauschenberg. It had such a profound impact on me that I knew experiencing his work that I was an artist who collects. Much like my coming to Varla, this was very organic and I simply understood my role as an artist through Rauschenberg’s important work. The act of collecting objects mixing art and life really spoke to me and became my medium to this day.

There is a lot of science fiction references/imagined future qualities in your work. What is significant about this genre for you and how does the visual language of it help to perhaps express an alternative reality for social minorities?

Paprika is a character that I created to confront the world we live in, as the “other” or as outsiders. Fashion, collecting, science fiction create an alternate world that gets depicted in the installations and works that I make. My Paprika character is inspired by science fiction and appears in almost all of my work since the beginning.  It’s a character without gender, race, religion, sexuality, an embodiment of all beings and total inclusivity.  I never conceived of Paprika to represent a single way of being or ways of being. Paprika is a fictional character and my alter ego, carrying forward histories that are important to me but also is able to stand for other histories of all who have ever felt like the other or like outsiders.  This is quite similar to the way people associate with many other science fiction characters because they embody someone and everyone at the same time.

What work will be included in your upcoming solo show the Museum of Contemporary Art Tuscon?

My current solo show Dragonfruit at the Mattress Factory Museum of Contemporary Art in Pittsburgh will be the point of origin for my solo show in Tucson. I will very likely adapt the work from Pittsburgh to be a greater reflection of the Mexican presence in Tucson. I also have an upcoming solo show at the Frost Museum in Miami, Tesoro, where I will take inspiration from works in the permanent collection which have rarely if ever been exhibited. It will give me an opportunity as an artist collector to interpret the collection through the lens of my practice.