During a new show at Galerie Max Hetzler, the American artist discusses the archetypal nudes in his canvases and his "uptight and conservative" attachment to painting 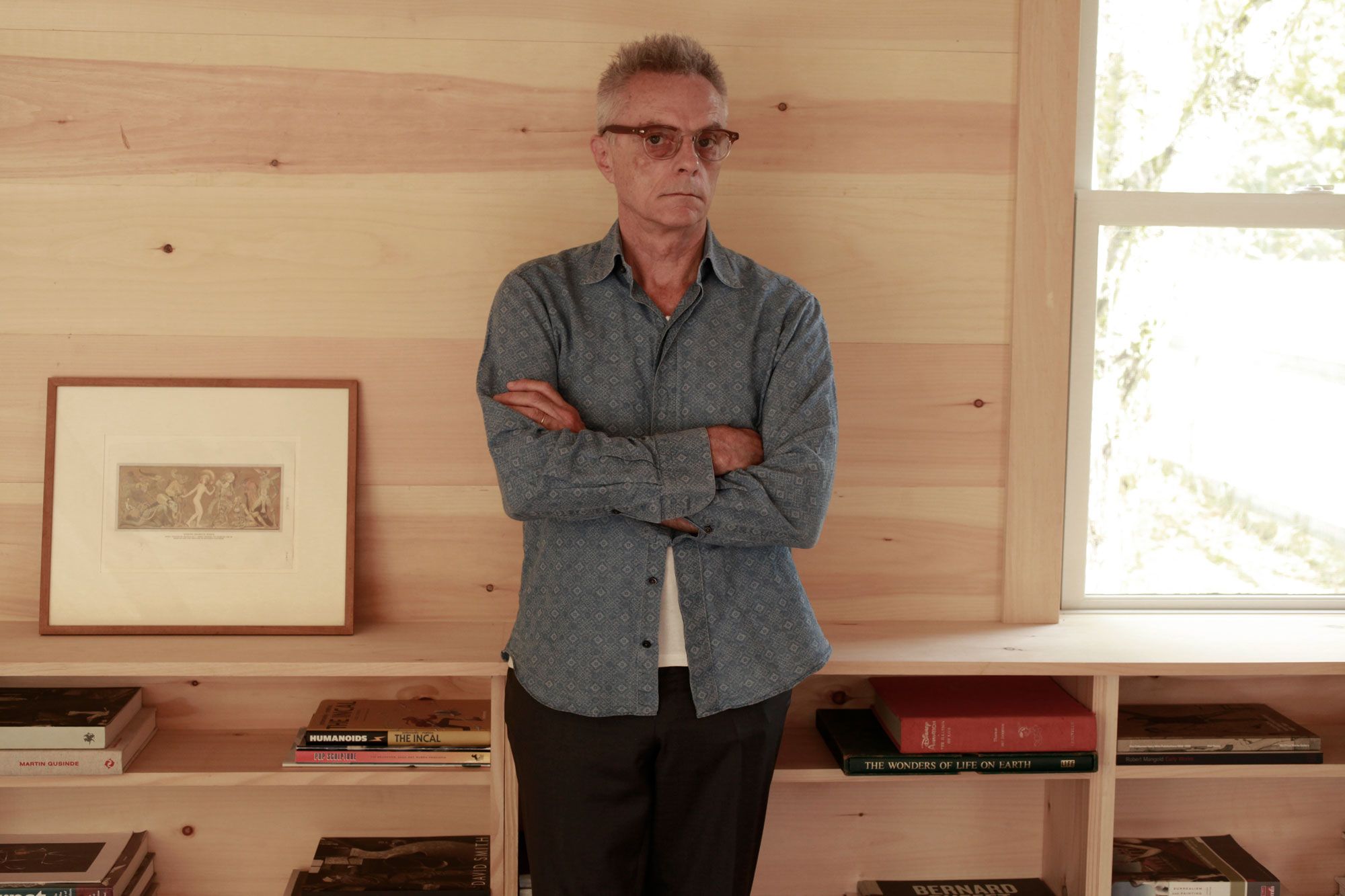 When do artistic juxtapositions work? And when are they pointless? Four new paintings by the American artist Carroll Dunham are on display at Galerie Max Hetzler in Dover Street alongside four works by the German painter Albert Oehlen in an exhibition which suggests that the two near contemporaries share similar artistic obsessions.

The Dunham canvases depict giant standing men having sex with giant women laid out in front of them; the Oehlen ones, dating from 2014 to 2017, are abstract, but the paintings of both artists share certain compositional traits, such as intersecting diagonal lines. “All I see are two x-things,” Dunham says when I show him the press release for the exhibition which places an image of one of Dunham’s canvases side by side with one of Oehlen’s.

Dunham is speaking to The Art Newspaper over Zoom from his home and studio in rural Connecticut, where he has spent the pandemic lockdown. “I don’t particularly like seeing my paintings with other peoples’ paintings because a lot of times, it’s meaningless,” he says. But it is different with Oehlen. The two artists’ multiple depictions of trees, painted over many years, were shown together in an exhibition at the Kunsthalle Düsseldorf in 2019 that travelled to the Sprengel Museum in Hanover last year. “That was really interesting to see and it was a lot of fun. I felt great about it,” Dunham says. 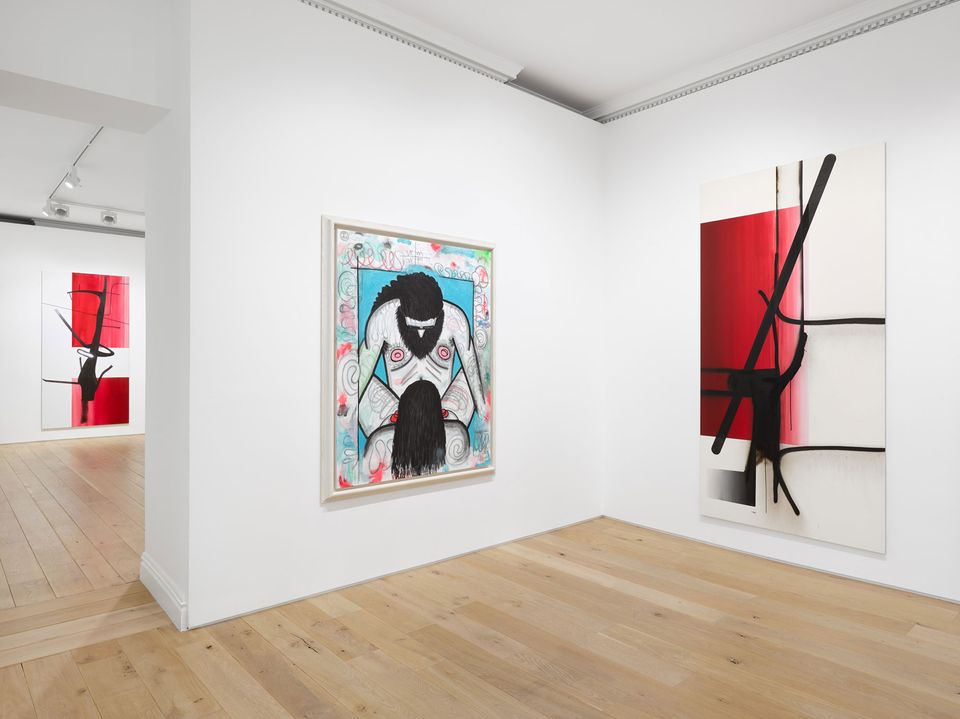 So, what do the two artists have in common, beyond an interest in painting trees and sometimes using giant Xs as the structural heart of their pictures? Oehlen has spent his working life restlessly exploring different painting styles and techniques, from figuration to abstraction and on to what he describes as “post-non-representational paintings”, his only enduring subject being painting itself, what it is for, what it can do and why we continue to value it.

Dunham too has moved from abstraction to figuration and in the process created a unique universe of nude female and male figures, which he refers to as “archetypes” because “I can’t think of a better word”, in boldly coloured, pre-industrial landscapes with cartoonish trees and flowers. In his Bathers series, Dunham takes on a classic art-historical subject tackled before him by artists such as Cézanne and Renoir. Women wash themselves in rivers, pick fruit from trees and dance in front of the sun with gleeful abandon. In his Wrestlers series, men take over Dunham’s Garden-of-Eden-like world, fighting, killing, hunting, sometimes stopping to rest or scream.

The people he paints “aren’t really part of social categorisation: they have no haircuts, no clothes, no mechanical artefacts, none of that stuff”, Dunham says. “They’re not anyone really, and they’re everyone.” Though his paintings are often sexually explicit, even bawdy—one critic described them as “vulgar beyond belief” as a compliment—Dunham sees his own work, as well as Oehlen’s, as deeply conservative.

“People see both of our work as kind of weird or wild. That’s not how it feels to me to do what I do. I see my project in a large sense as being pretty uptight and pretty conservative. I see Albert as conservative too. Why would you spend your life messing around with something as stupid as painting if you didn’t have a certain attachment to traditional forms? Even if your only interest is in subverting it, you have to believe in it enough to stress-test it. I think we’re actually both very rigid,” he explains. 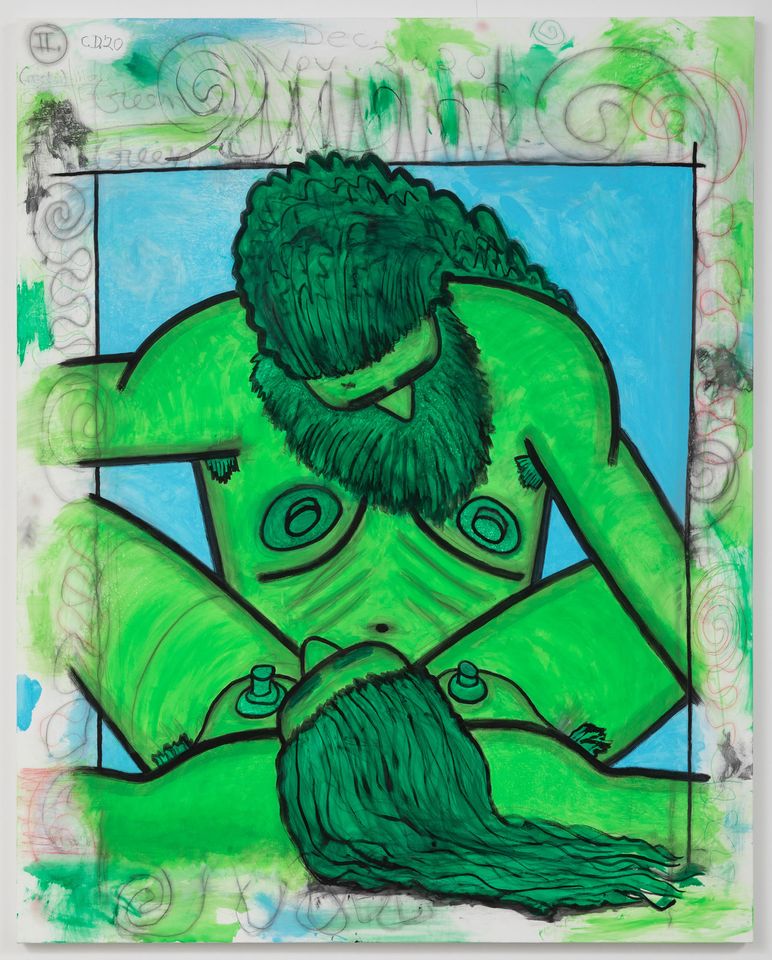 Part of Dunham’s project has always been to disregard the boundaries between high and low art. Early on, he was influenced as much by the underground comics scene of the 1960s and artists like Robert Crumb as he was by the art-historical canon. Those influences persist in the paintings on show at Galerie Max Hetzler, even if they are no longer at the forefront of Dunham’s mind. Pick up any comic today and you will see that the way Dunham has zoomed in on the figures having sex, framing them within a rectangle of colour, their extremities cut off by the border of the rectangle, is a standard technique of comic book illustration, creating the immediacy and impact which underpins the art form.

But there is more. Dunham delineates his men and women with black lines, another comic book technique, and also plays with the conventions of pictorial space, the naked supine women in these canvases lie not on the ground but on the edges of the frame itself, their hair tumbling over a decorative border which Dunham has placed around the blue rectangle at the centre of the composition. These figures are breaking out of the painting towards us, just as the superheroes and villains of the comic universe, from Marvel to manga, smash through the borders of their respective frames.

“These are things that I had at the top of my mind probably quite a long time ago and have internalised to the point where I’m not thinking a lot about them in terms of their original sources or the influences that precipitated certain things. I only think of them now as tools or elements in what I’m doing,” Dunham says. 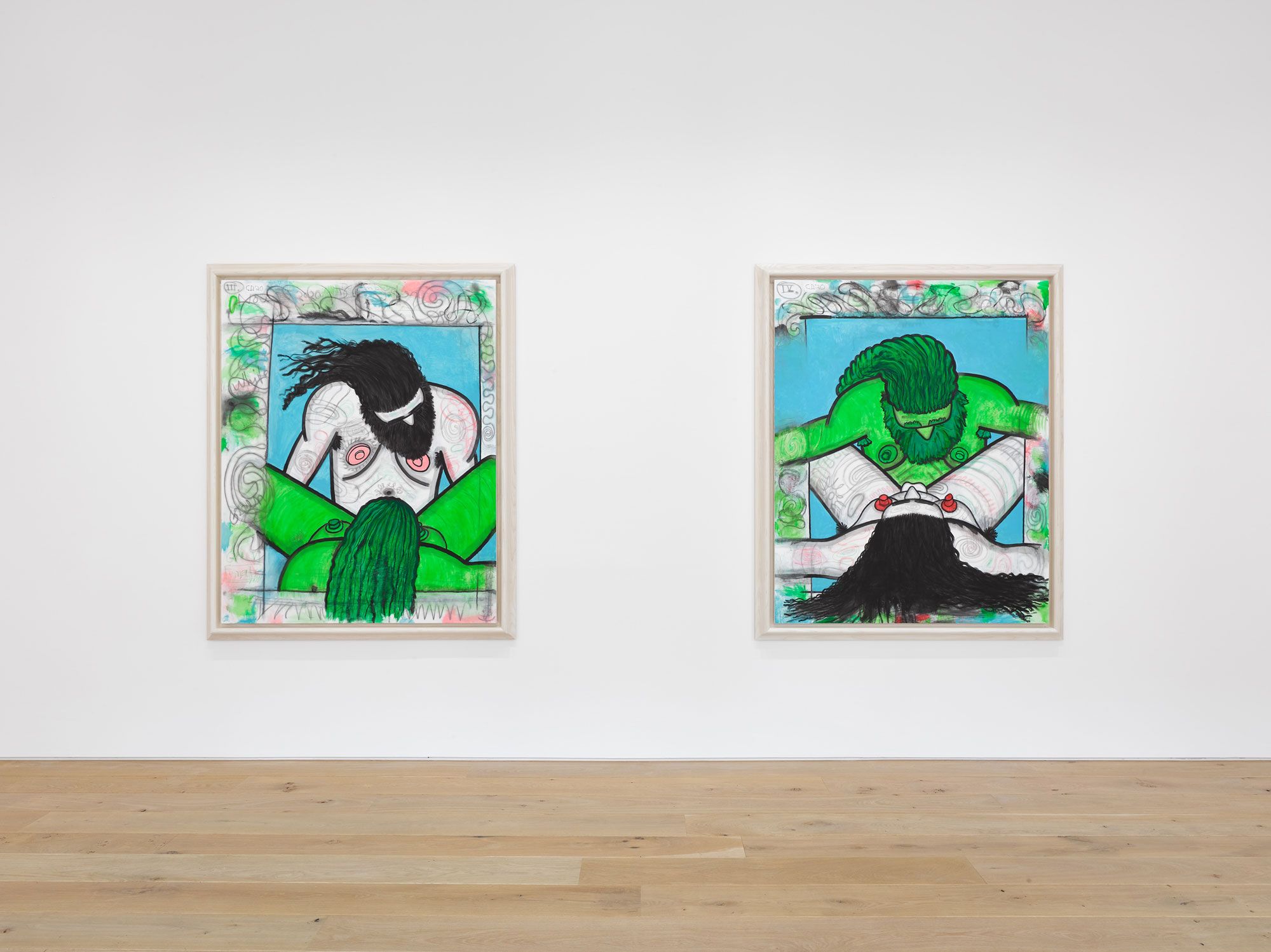 So, what exactly is he doing in these paintings? It is a difficult question to answer, for both Dunham and for those writing about his work. He says he is “not interested in telling stories” and resists efforts to impose any kind of narrative on these works. His primary concern, he says, is “something to do with how you build pictures out of these weird parts”.

While the paintings do show people having sex, they are not about that, he says. When I tell him that the copulating couple is the first thing I see when I look at the works, he says I’m not looking hard enough. “That’s on you. You’re not asking me anything about spirals and wiggly lines, they’re there as much as the two people having sex. It’s all interwoven for me, that’s what sustains the work. That’s what makes it meaningful to me.”

The paintings are the first in which Dunham has combined the naked women of his Bathers series with the naked men of his Wrestlers series, a union which he describes as a “gathering of vocabulary into one picture frame”. This will continue to occupy Dunham for some time, he says. “When I embarked on this new group of work, I knew it would take me through a certain terrain and I’m in there now and I have to follow it through. There are a lot more paintings and drawings that are connected to these works.”

“I think of it as a mediumistic relationship. Ideas and feelings come to me from one direction and materials and cultural things come to me from another direction. Any artist is operating at the hinge point of all this stuff. I wouldn’t necessarily have chosen to be the kind of artist I am. When I was young, I thought that being a painter was the lamest thing you could possibly do but there was a certain kind of inevitability: my interest, my skill set, time, place that led me to it. It almost started as a conceptual art project, but it kept going. I’ve come more and more to think of it as something that has not quite a mind of its own but it’s as if my mind is made up of different districts or precincts and I don’t really know the source of the artwork in the end. I can’t honestly say that I know it.”