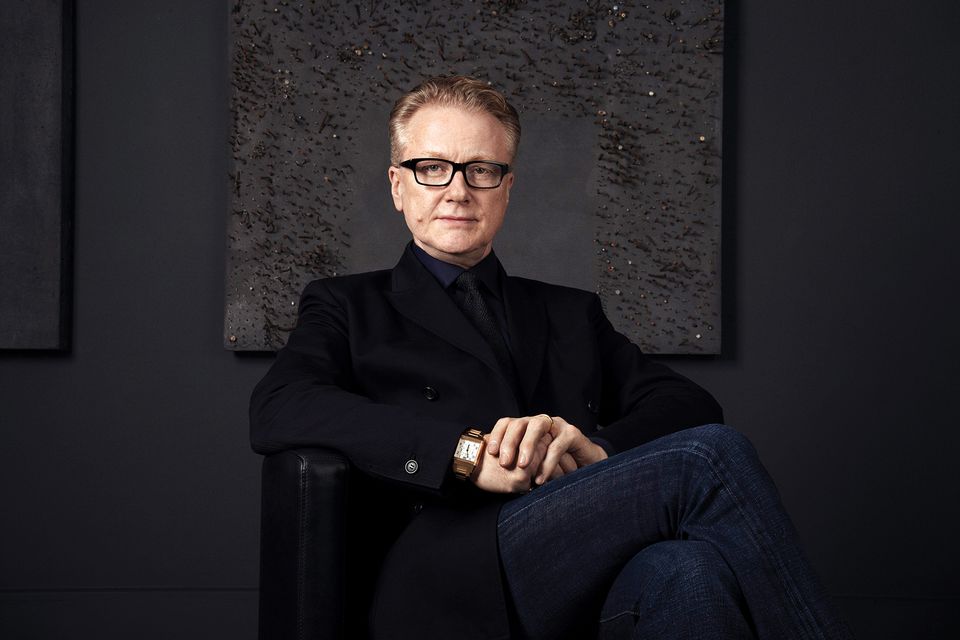 David Roberts in front of a work by Theaster Gates Photo: Billie Scheepers

Since the 1990s, the Scottish property developer David Roberts has amassed a collection of several thousand works by more than 800 Modern and contemporary artists, including Sarah Lucas, Phyllida Barlow, Danh Vo, Louise Bourgeois and Grayson Perry. In 2007, he founded the David Roberts Art Foundation, a non-profit contemporary art gallery in central London, which closed last year when Roberts announced plans to open a 20-acre sculpture park in Somerset, south-west England. However, due to local opposition to the planning application, he now plans to open a park at his property in Scotland. Performance art is one of Roberts’s abiding interests and so every year during Frieze Week his foundation puts on An Evening of Performances in north London. This year the event took place on Tuesday at the O2 Forum Kentish Town and featured Fiona Banner aka The Vanity Press and Martin Creed, among others.

I did not grow up surrounded by art, but I’ve always had an interest in it. I was going to be a naval architect, before going into property. When I bought my first house, I started buying prints and drawings purely for decoration. My interest grew in my early 30s, and then it was a case of self-education—talking to people, visiting galleries, meeting artists.

Nearly 30 years ago, I was on holiday in Brittany and bought a painting by Manuel Otero, probably not an artist anyone has heard of now, for around €5,000. I’ve still got it—I rarely sell anything. It was the beginning of a very bad habit.

I just bought a large outdoor sculpture of a head by Nicolas Party. I already own some of his paintings and was in Glasgow visiting Toby Webster, [the founding partner] of the Modern Institute, which represents him. We went for a walk and I saw this sculpture and loved it.

There are occasions when I spend several millions, then others when it is just a few thousand. It’s not really the way I think—some of the works I’m most attracted to are not the most valuable. Other than insurance value, it’s irrelevant to me.

A small painting from the late 1960s by Philip Guston. It’s one of his early Klan series, of a Ku Klux Klan guy driving and smoking a cigar. I think it’s called Driving. I love it and look at it every day.

A really great early Picasso, probably from the Blue period. I don’t really care which one, as long as it’s a very good one.

I’ve got a large plaster by Chris Martin, and moving it has to be done with extreme care as it’s so brittle. I’ve also got a lot of Berlinde de Bruyckere wax works, which require careful looking after; they can’t get too hot or too cold or they’ll crack.

I don’t really have an answer. There’s certainly lots of art in the loo, but that’s normal, isn’t it? I hang it everywhere.

I’d like to have met Philip Guston. I got to know Anthony Caro well before he died. I loved his company. I love talking to older artists about when they were young—you learn so much. And Picasso—I would have loved to have met him too.

Lots of things that I bought early on, I certainly wouldn’t consider buying now. There are more than 800 artists in the collection, some of them I look at and think, “I wouldn’t have bought that now”, but we all make mistakes and it’s part of learning. I like to see how my collection has developed. I don’t have any massive regrets.