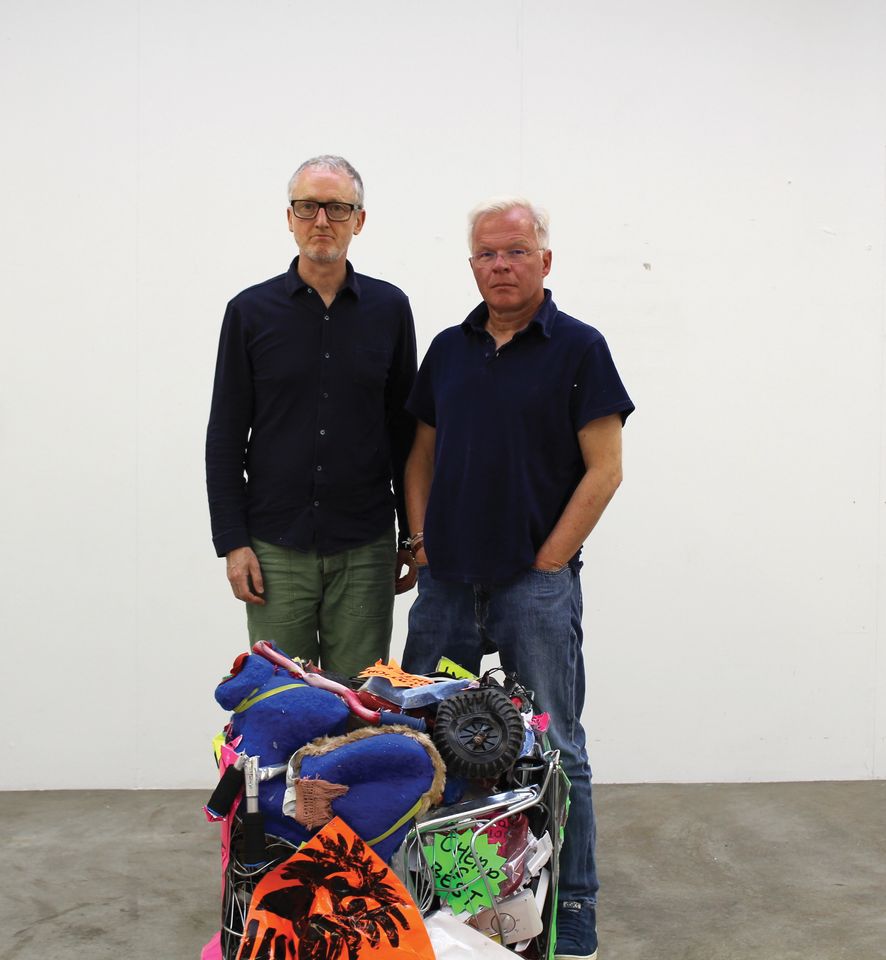 Michael Landy (left) was signed by Karsten Schubert 30 years ago

The London-based dealer and collector Karsten Schubert met the UK artist Michael Landy 30 years ago, when Schubert visited his degree show at Goldsmiths. He signed Landy up immediately, along with Gary Hume. Schubert now holds the largest collection of Landy’s work at around 50 pieces. Here, the artist speaks to him about his motivations.

I was about 12 years old when I began collecting coins, then Roman antiquities. I eventually realised that if you want to get fantastic things, you have to collect contemporary art. It came through my grandmother—she lived in a part of Berlin surrounded by museums. It’s one thing looking at works in a museum but a totally different proposition to live with them.

When did you first start collecting my stuff?

I bought one of your tarpaulin works from your first show with us.

They have stopped making that type of tarpaulin. Do you remember which of my works you bought most recently?

I got one of your Breaking News drawings. It says: “Keep Your Laws Out Of My Vagina”.

Imagine I’m about to destroy your whole collection in my Art Bin at South London Gallery but you could keep one piece. What would it be?

I think it would be the early Mondrian drawing of the tree along the river; it’s in my bedroom.

From somebody who knows what you’re after, a dealer, and offers you very specific things. In the past, dealers would have asked questions about the buyer’s collection, why they wanted a work. Now, on the whole, they don’t as it gets in the way of things.

Do you think that knowing the artist alters the way you see their work?

Yes, because you get a studio perspective. You become part of the process, have the privilege of seeing things as they happen. It makes you nervous, because suddenly you have an emotional investment. I know collectors who say they don’t want to meet the artist for that reason—it allows you to move on without any pain.

Can you have that same connection with younger artists, as you do with your own generation?

I think in your 20s and 30s, you are very open to things. Then there comes a point when you’re full up. I’m now 57, and occasionally I see a show of someone in their late 20s and I just don’t feel particularly engaged. It’s what happens—you can’t carry on being fully engaged with everything. There are certain collectors in their 60s and 70s who still go to everything and you just think: “Guys, just relax a little”. You grow up with your own people and you should just stick with them and not move onto the next. There was a point, a few years ago, when everyone wanted the next hot young thing. Now everyone wants historic works.