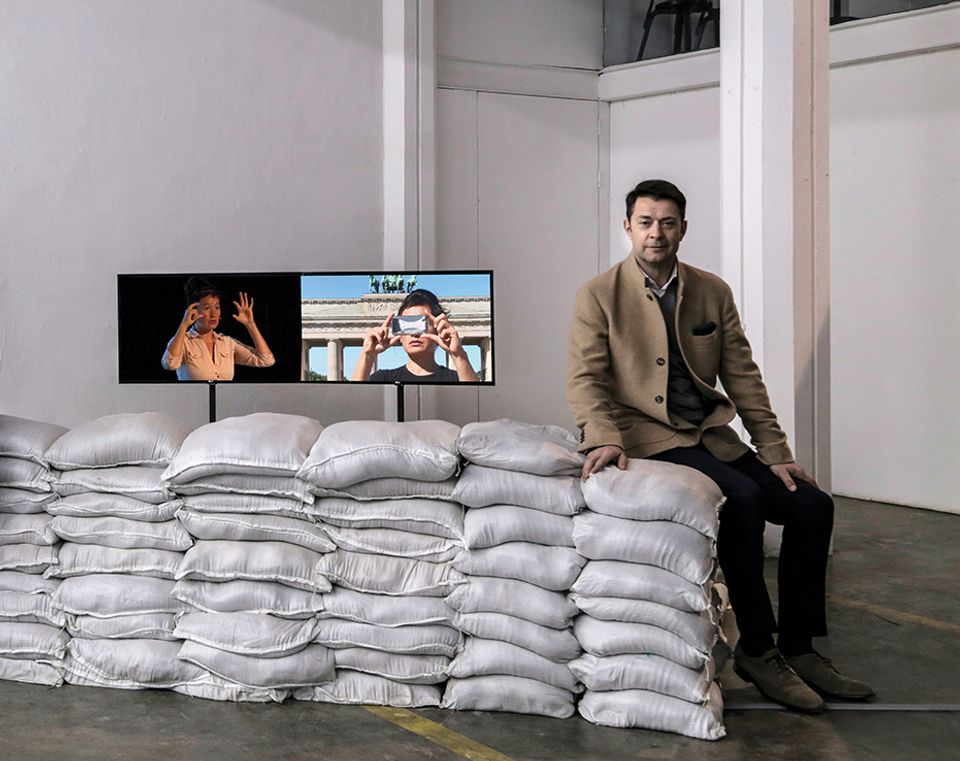 The Frankfurt-based businessman Mario von Kelterborn began his collecting career on a somewhat more diminutive scale—with stamps. Rather than focusing on, say, popular animals or famous people, the young philatelist was particularly interested in the era of hyperinflation in Weimar Germany in the early 1920s, where the price of stamps rocketed from DM20 to DM50bn within a year. Von Kelterborn was born in 1969 in East Berlin, where he grew up, before moving to Augsburg to study business. He began working in capital markets at major banks such as Lehman Brothers and Deutsche Bank, before starting his own consultancy company.

He started collecting art in the late 1990s with his wife Julia and now devotes most of his time to his Von Kelterborn Collection. It focuses primarily, but not exclusively, on video art and video installations, and includes works by artists such as the German film-maker Harun Farocki, the Paris-based collective Claire Fontaine, the Irish artist Richard Mosse, and the Austrian artist Erwin Wurm.

The Art Newspaper: What was the first work you purchased?

Mario von Kelterborn: It was a series of work by Anke Röhrscheid when she was a student at the Städelschule art school in Frankfurt. We are still collecting her.

I buy most of our works in galleries.

Value is not only about money. Maybe Hito Steyerl’s Factory of the Sun (2015)— her piece that was shown in the German Pavilion at the Venice Biennale in 2015.

I would split the unlimited amount and get my hands on Gary Hill’s masterpiece from Documenta 9, his video installation Tall Ships (1992), and also buy the full set of 62 photographs from Taryn Simon’s series An American Index of the Hidden and Unfamiliar (2007).

I still regret not having Neïl Beloufa’s Kempinski (2007) in the collection. I bought it twice, but both times something went wrong.

If your house were on fire, which work would you save?

The birthday drawings by my kids.

Pae White’s chandelier, Many Moons of Tunis, because once a week I need to change one of the 30 bulbs. But anyway, I love it.

A wall painting by Tobias Rehberger on the outside wall of our house.

It would be pretty cool to have Taryn Simon, Richard Mosse, Hito Steyerl, Gary Hill, Bjørn Mehlus and Korakrit Arunanondchai at the party.

Be authentic and passionate in all you do.