The Dubai-based financier Walid Kamhawi’s decision to start collecting was motivated by economic factors. In around 2004, he noticed that the Chinese economy was on the rise and he wanted to tap into this by investing in art. At around the same time he met the London-based art adviser Arianne Piper, who has her own consultancy firm. Kamhawi had just bought a flat in Knightsbridge, central London, and asked Piper to help him source works of art for the three- storey property.

He began collecting works by Chinese artists such as Qiu Zhijie, Weng Fen and Yan Pei-Ming before branching out into Indian and Pakistani art a few years later, when he bought pieces by artists including Lahore-based Rashid Rana (A day in the life of a landscape, 2004). Kamhawi has also invested in African art, acquiring works by artists such as Ibrahim El-Salahi of Sudan and the Malian photographer Malick Sidibé, known for his black-and-white pictures from the 1960s and 70s. Sidibé’s first solo exhibition in the UK opened in October 2016 at Somerset House in London—six months after his death.

Indeed, geographic diversity underpins Kamhawi’s collecting strategy. His purchasing is also guided by other principles, he says, such as enjoying the work, never reselling, and owning pieces by artists whose works can be found in the collections of leading museums and galleries. His collection is housed at his residence in the lush Dubai district of Al Barari. 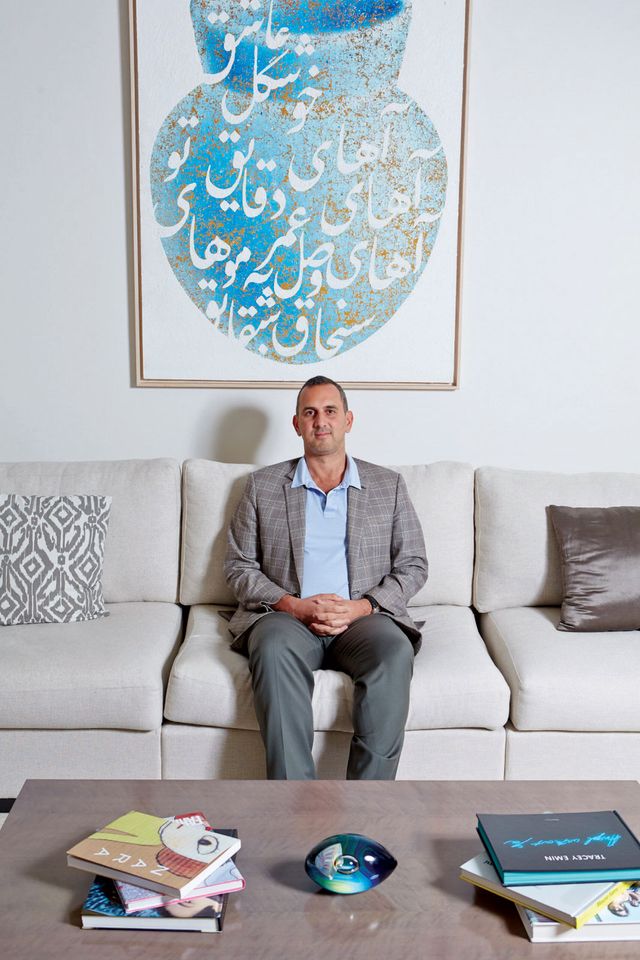 Walid Kamhawi: It was in the mid-2000s when China was in its economic ascendancy, and I thought [the way] to get exposure to its economic success indirectly was through investing in art. Following my initial purchases, I developed a greater liking for art and have been developing it as a hobby since then, exploring the art of a broad variety of countries and artistic styles.

What was your first art purchase?

Shangri-La Guan, a white oil painting by Chinese artist Shi Jing, representing the contours and crevasses of a mythical mountain range, evocative of the Himalayas.

I’ve got too many favourites—hopefully it won’t catch fire!

Hard to say in isolation and there is always a value perception component. However, as I spent my formative years growing up in Kuwait and have a career in finance, I am partial to Andreas Gursky’s Kuwait Stock Exchange.

None has required any maintenance so far.

From ones whose works I own? Yan Pei-Ming.

More generally I feel like I have missed out on buying Russian art, despite having lived there on and off for a few years.

A major work that is hung for display in a walk-in closet.

What’s the best collecting advice you have been given? (Bonus: who gave it to you?)

I always buy what I love, but also what expands my horizons into new cultures and styles. I also always rely on expert advice in making a purchase. I have been working closely with [the art adviser] Arianne Piper in developing my collection, and her input has been very valuable.