‘It is dangerous for artists when the events of the day change their work’: Marina Abramovic on art and the coronavirus pandemic

By Ben Luke and Louisa Buck 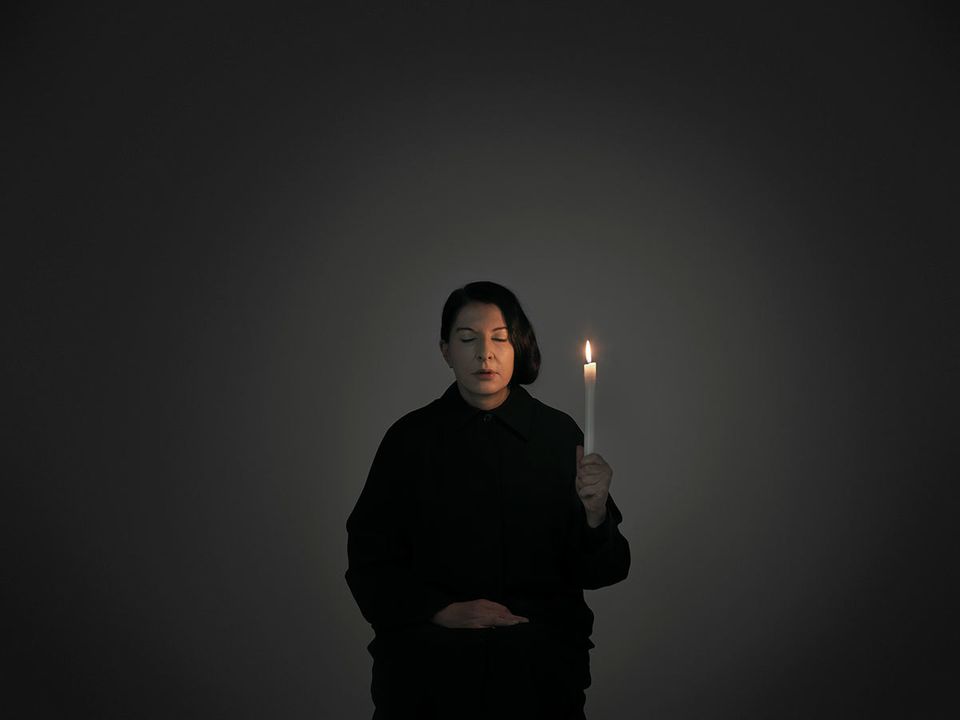 If there is one artist who has brought performance into the artistic mainstream, it is Marina Abramovic. For more than 50 years, since the beginning of her career in Belgrade in the early 1970s, the self-styled “grandmother of performance art” has been using her own body to make intense and gruelling works which explore her own mental and physical thresholds as well as those of her audience. “I test the limits of myself in order to transform myself,” she says.

Her artistic ordeals—many experienced alongside her onetime partner and collaborator, Ulay—have included cutting a five pointed star in her flesh before whipping herself and lying naked on a cross of ice, walking for 90 days along the Great Wall of China, and having a loaded gun and crossbow pointed at her. At the 1997 Venice Biennale, Abramovic was awarded the Golden Lion for Balkan Baroque, her response to the conflict in her native former Yugoslavia which involved scrubbing a malodorous mountain of bloody cow bones over four days.

But it was in 2010 that Abramovic was propelled to global superstardom with The Artist is Present, the live work that accompanied her major retrospective at the Museum of Modern Art, New York. Here she held silent court for seven hours every day during the show’s three-month run, sitting motionless at a table whilst more than 850,000 people visited the show or queued to sit opposite her, breaking all the museum’s attendance records.

More recently, Abramovic has been working with new technologies and her mixed reality performance piece The Life premiered at the Serpentine Galleries last year. Her first major UK survey of both historical and newly commissioned works was scheduled to open at the Royal Academy of Arts in London in September but due to the coronavirus pandemic it has been postponed until next year.

Abramovic spoke exclusively to The Art Newspaper for The Week in Art podcast and for the June edition of the paper, which features an extended interview with Louisa Buck, Inna Bazhenova and Ben Luke, with more on her opera about Maria Callas and her response to the death of Ulay. Here are some highlights of the The Week in Art interview.

Has coronavirus disrupted the pattern of your life as an artist? Or is your working life normally isolated anyway?

It hasn’t disturbed my life at all. I live like a modern nomad and I travel from place to place. My body is actually the only place that I relate to. In January I left New York where I live and I went to India for a detox, which I do every year. Then I went to London and from there to Munich to work on my opera and then to Austria. I hope to go back to New York next week. In every circumstance, I work, and most of the time I work in isolation. So for me, this circumstance didn't really change my way of living. The only thing that changes is relational communications with people because now, with social distancing, everything is loaded through media technology. 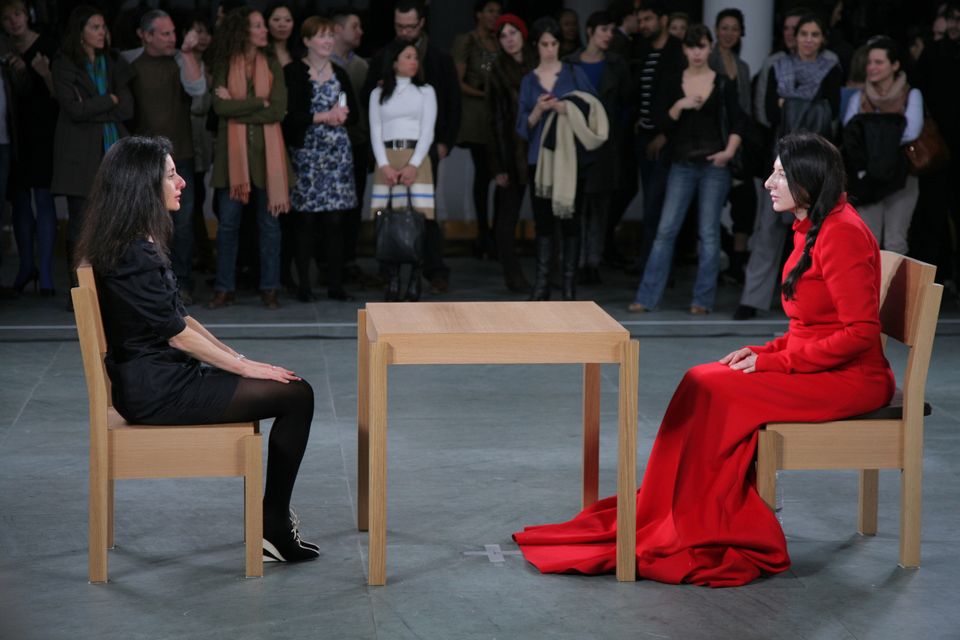 Marina Abramović, The Artist is Present (2009) at MoMA Photo: Courtesy the artist and Sean Kelly Gallery

Your work has always pushed and pulled between the extremes of collaboration with many groups and communities and solitary isolation.

Yes I always push at this. The really important problem right now is that people are living in fear because they love to organise their lives and to know everything that they are going to do from now until when they die. And in such an uncertain situation this is not possible. But I love uncertainty as I think about the present time as the only actual reality that we have. The only thing that is certain is now.

Do you feel that the current climate makes you concentrate on the events of today or do you find that you are escaping into a different realm? Is the coronavirus itself affecting the way that you work or are you, in a way, escaping into work?

It doesn't affect my work directly. I always think it is very dangerous for artists when the immediate events of the day change their work or the way they think. When there was the Balkan war in Yugoslavia, I made the piece Balkan Baroque where I was washing the bones but it took me a long time to really respond to the situation. And even then, I didn't want to make the piece directly relate to the war in Yugoslavia. I wanted it to transcend the feeling of the war, and for the image that I created to be used anytime, anywhere that somebody is killing: it doesn't matter if the war is in Syria, or wherever. So it is the same with the coronavirus: if we immediately make work about this, it is somehow like you are recycling the daily news and I don't think art should be about that. Art should be disturbing, it should ask questions and it should the predict the future. During the Second World War, you know, when everybody was painting the disasters of the war, Matisse was painting flowers and this was a really great response because the news is so depressing, so repetitive. It's more a question of how to lift human spirits.

In recent years performance has entered the museum in a really meaningful way and now suddenly we're in a situation where people being close to each other in large groups is unhealthy. How do you think performance can emerge from this and do you think it will take time for performance art to get back to a prominent position again?

I feel that I'm really responsible for performance becoming mainstream art, because I've been doing this for over 50 years and I have never given up. So this is like my baby we are talking about. I really think that the coronavirus is not going to stay forever, there will be a vaccination and then we can have normal performance events. In the meantime I think augmented reality could be a solution because you can capture the performer’s energy and have it in your living room, all just for you.

Your Royal Academy exhibition has had to be postponed until next year due to the coronavirus—are you making any changes to that show because of what’s happening now? Are different works gaining new currency and will they now need to be included?

The one thing that is to be changed in the show is my homage to Ulay because he passed away just at the beginning of the coronavirus situation and could not even have a proper funeral. So we will have some extra highlight pieces from our 12-year collaboration as a homage to him. I don’t like to deal with the coronavirus—I literally don’t have any ideas or inspiration at all. The coronavirus is not exactly a sexy thing to work with. The title of the show is After Life, so that’s already a kind of prediction for the future.

After Life also relates to the idea of legacy, which is something that for many years has been the subject of debate in the performance world. Unlike some artists, you have documented your works in photographs and on film, and that was a very important decision to make, because they are now in museum collections and everybody can appreciate them today. Then there is also the revisiting of works through re-performance—and you were also a trailblazer of this with Seven Easy Pieces at the Guggenheim in 2007.

Legacy is extremely important for me. My mother was absolutely fanatical about documentation and so from a very early stage I learned to document everything I've done in my life, every letter I received, every piece of paper, every exhibition. And now I’ve digitised them. If I think backwards the first thing for me was to put performance into mainstream art and then to invent re-performance, so the historical pieces can be re-performed following certain rules. I have a 25-year teaching career in different countries around the world and for young artists I have created the Abramovic Method which I call Cleaning the House, to teach them how to make durational works of art. After The Artist is Present I also created the Abramovic method for the public to go through certain exercises in order to be able to be focused and concentrated for long durational performances. So now we have the Marina Abramovic Institute of performance art, which includes the legacy of the historical performance works, and the Abramovic Method, which facilitates the public and young artists to make the works of art and to preserve their legacy.

• The Week in Art podcast by The Art Newspaper is available every Friday on our website and on all the usual podcast platforms including Apple Podcasts and Spotify. This podcast is brought to you in association with Christie’s. You can hear Catherine Wood, a senior curator of international art at Tate Modern, who specialises in performance art, discussing Marina Abramovic’s collaboration with Ulay in The Week in Art podcast Remembering Ulay .