For his new Tate Britain show, the artist used illusion to recreate his childhood experience beneath a motorway 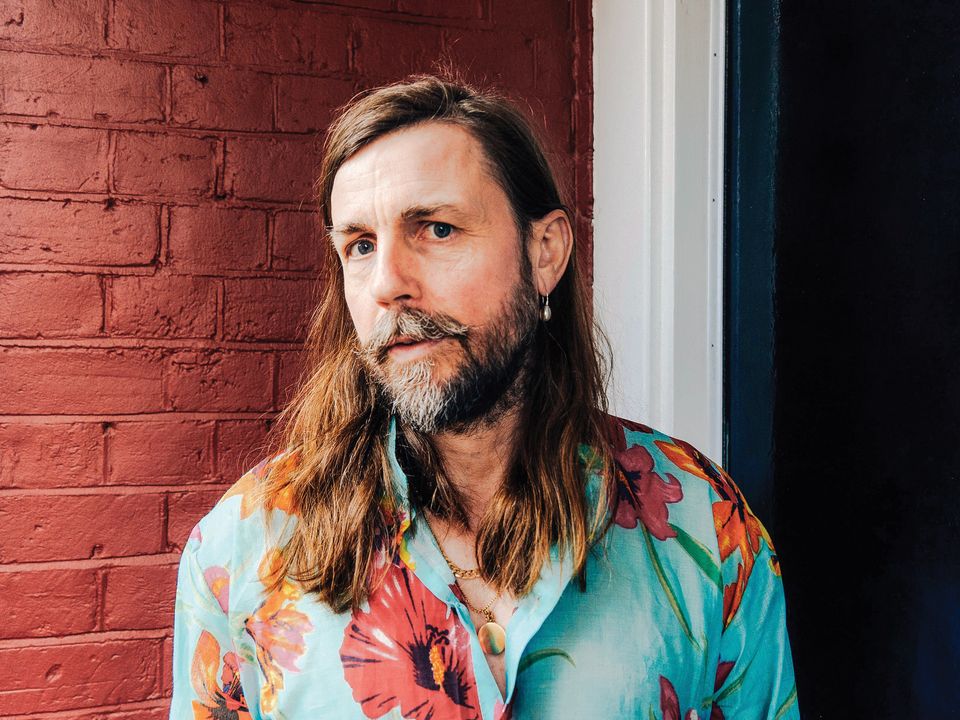 Leckey’s work draws on magic and folklore rather than nostalgia Photo: © Carys Huws

Mark Leckey has created an astounding spectacle at Tate Britain. He has built a life-size reconstruction of a concrete motorway bridge under which he played as a child on the Wirral in Merseyside, north-west England. Leckey says that as a child he saw a fairy beneath the real bridge, a moment that has haunted him ever since. The reconstruction of this Brutalist edifice is a stage set for three video installations, all with a distinctive ghostly feel. In a new multimedia installation called Under Under In (2019), he uses a Victorian illusion technique called Pepper’s Ghost to conjure a group of young people flickering in an alcove. These kids also appear on a bank of screens, often masked and clothed in sportswear brands that, typically for Leckey, become a focus for the camera. In Fiorucci Made Me Hardcore (1999) and Dream English Kid (2015), Leckey collages together video footage of raves and club scenes, northern English “casual” culture and popular imagery and consumer products redolent of his youth. The result is a deeply atmospheric exploration of collective and personal memory, myth and reality, and the freedoms and limits of technology.

The Art Newspaper: Did you consider doing a more orthodox, linear retrospective?

Mark Leckey: Yeah, all along. And there have been a lot of times where I’ve kind of kicked myself for not doing that! But I did something at MoMA PS1 in New York about two years ago, where I showed a lot of work and I didn’t get that much out of it. I don’t like arranging things in a room; it doesn’t appeal to me, I find it quite dull. And it was because of the space, as well: I had the bridge idea and I just couldn’t let that go. I like the idea of it crashing through or pushing through the space. 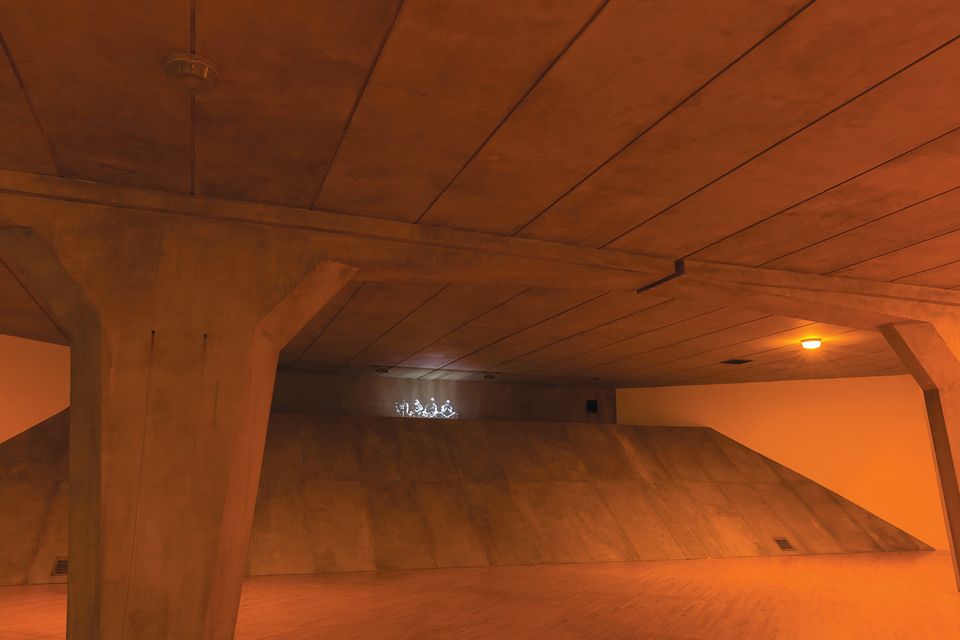 Under Under In (2019) uses the Victorian-period Pepper’s Ghost illusion technique Photo: © Mark Blower

It must have been terrifically complex to make, with multiple screens, the surround sound and the technology embedded in the structure of the bridge.

It was very complex to do. I wanted this sense of these kids being on CCTV, being watched, being observed, and then what they’re seeing on their phones. So, there’s them as a group, as a gang, as this kind of a faceless body, which has this distance, and then there’s this stuff that’s much more intimate, and you become involved with them. That produced this technical complexity.

In the bridge’s undercroft, there is an image like an apparition of the group of kids, using the Pepper’s Ghost technique. What does that consist of?

Pepper’s Ghost is an old, Victorian technology. It’s like a magic lantern show where they figured out a way that if you project an image onto a mirror and kind of bounce it, it creates this insubstantial image that seems to be hovering in space. A couple of years ago, there was that Tupac hologram show. They’re calling them holograms but they’re not. It’s exactly the same technology but gussied up a little bit.

The imaginary and the real are interpolated; I just think that’s the world we inhabit.

You’ve talked about the fairy that you saw under this bridge when you were a child. How much is that Pepper’s Ghost image an attempt to enter a space of folklore?

The idea is to try and enter that through a very municipal portal. That’s what my experience of a lot of things feels like: this mixing together of the municipal and the magical. That’s what the title—O’ Magic Power of Bleakness—means, in a way. That’s what I’ve always been fascinated by. It’s the same thing with the brands: you invest in these things and they become powerful to you. In themselves, they might be just tokens of capitalism, but you’ve invested in them in such a way that they transcend that; they become something else, something significant, and they produce this other energy. 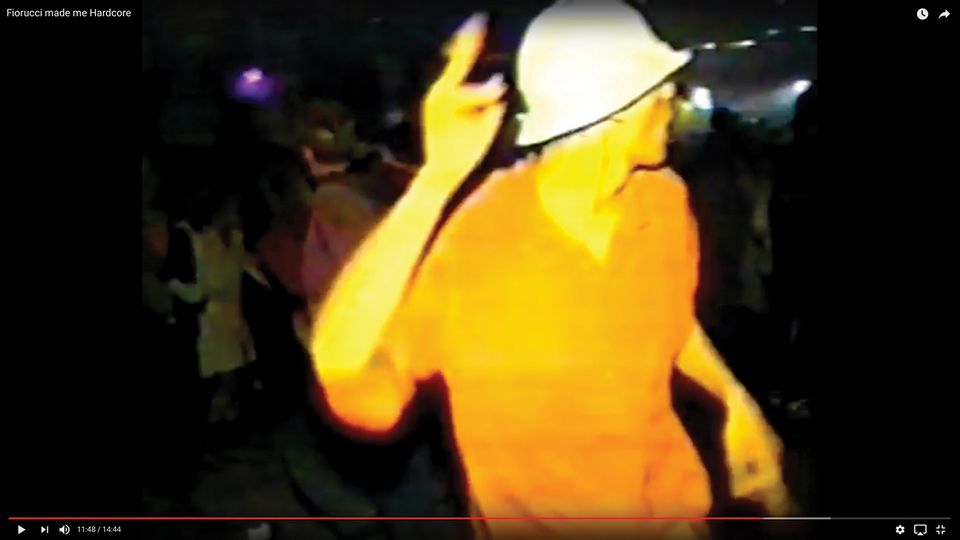 Fiorucci Made Me Hardcore (1999) draws on northern English rave culture Courtesy of the artist; © Mark Leckey

Dream English Kid is like a sequel to Fiorucci Made Me Hardcore; there’s an element of personal nostalgia about your youth and growing up. In the current film, your language feels more at a remove. How deliberate was that shift?

The whole new piece is based on an experience I had, so it is as autobiographical as the other two. But I didn’t want to set it in that period, I wanted to make something set in the present day because I didn’t want it to speak about nostalgia in any sense. I just wanted it to be about this convergence of magic, folklore and technology. I feel like that’s what we inhabit now: this strange state of very advanced technology that seems to return us to an almost medieval mind-state. The imagined world and the factual world collide and are indistinguishable. But it is also based on an idea of me being taken to Fairyland which is here at Tate Britain. To me, it’s autobiographical, but I guess I’m disguised in some way.

It’s fitting that your work is being shown here at the same time as William Blake: you saw a fairy under a bridge and he saw angels in a tree. It’s about the imagination isn’t it?

Yeah, it’s about imagination being literally concretised. So the imaginary and the real are interpolated; I just think that’s the world we inhabit. Blake was a visionary, he found a potential way of being where his visions were as real as what consensual reality says is real. That used to be the role of the artist: to produce new realities.