Sutapa Biswas: 'Our reckoning with empire has certainly begun, but we've only scratched the surface'

Ahead of two major UK shows, the British Indian artist discusses her new work and her role in the Black British Arts movement 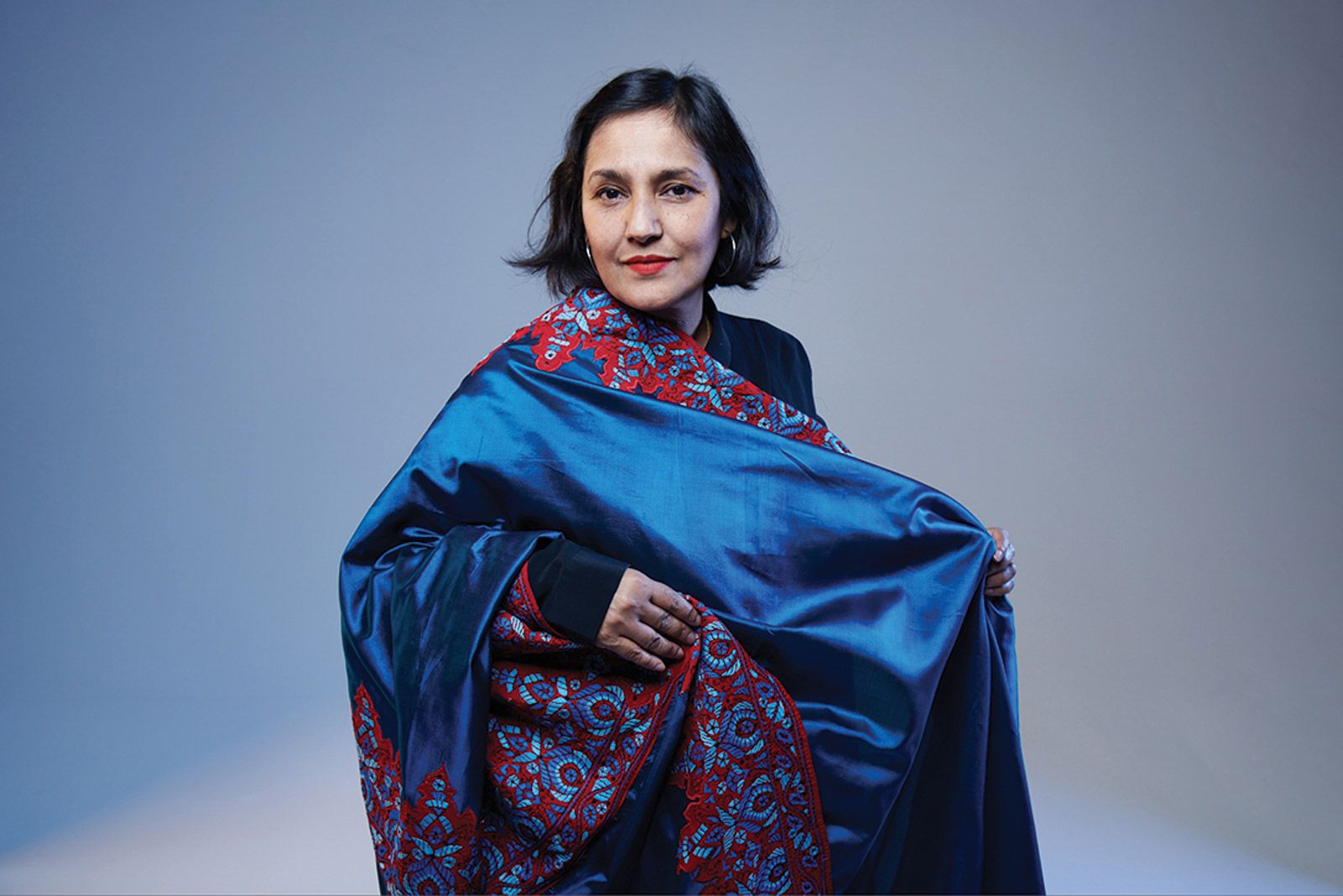 Sutapa Biswas, who is having her first solo show in 15 years Theo Deproost for ITV Creates

Any serious discussion on artists who have challenged the UK to confront its imperial legacy should include Sutapa Biswas. Since the mid-1980s, the British Indian artist has worked across moving image, photography, painting, installation and performance to explore concepts such as temporality and colonial trade networks in poetic and provocative ways, all while centring her experiences as a brown, female immigrant.

In her earliest film Kali (1984), Biswas dresses as the eponymous Hindu goddess and places a covering over the face of influential feminist theorist Griselda Pollock, then her university tutor, who serves as an icon of imperialism. “It was Biswas who forced us all to acknowledge the Eurocentric limits of the discourses within which we practise,” Pollock would later write, emphasising the artist’s contribution to discussions around race, gender and colonialism in arts curriculums.

It has been nearly 15 years since Biswas’s last solo exhibition (more on why that is below), but now two overlapping shows are due to open in the UK. The first, at Baltic in Gateshead, will focus on Biswas’s moving-image works, while the second, at Kettle’s Yard, Cambridge, will also feature paintings and installations. Both will reassert her vital place within the continuing struggle against discrimination in the arts

The Art Newspaper: Your two forthcoming shows centre around your new film Lumen (2021). Can you tell us about it?

Sutapa Biswas: The work is semi-fictional and tells the story of my family’s sea voyage to England, after my father left India under difficult circumstances, and [because of] his political beliefs that were at odds with the government. Lumen was shot on the west coast of India and in Bristol and incorporates archival film footage of the lavish lives of the British Raj in India. It’s Shakespearean in its framing, lamentful and angry but also euphoric. It lurches between poetry and pathology.

Will it uncover histories besides your own?

Beside my memories, the film touches upon a lesser-known aspect of the slave trade that occurred across the Indian Ocean from around the 17th century into the 20th century—the “other middle passage”. There is a tendency to refer to this as “indentured labour”; whether that’s even correct or not, it’s all slavery to degrees. Those conditions of slavery in the Indian Ocean were by and large continuous, even after the abolition of the trade. It is one of many histories we as a nation are yet to take responsibility for. Our reckoning with empire has certainly begun, but we’ve only scratched the surface. 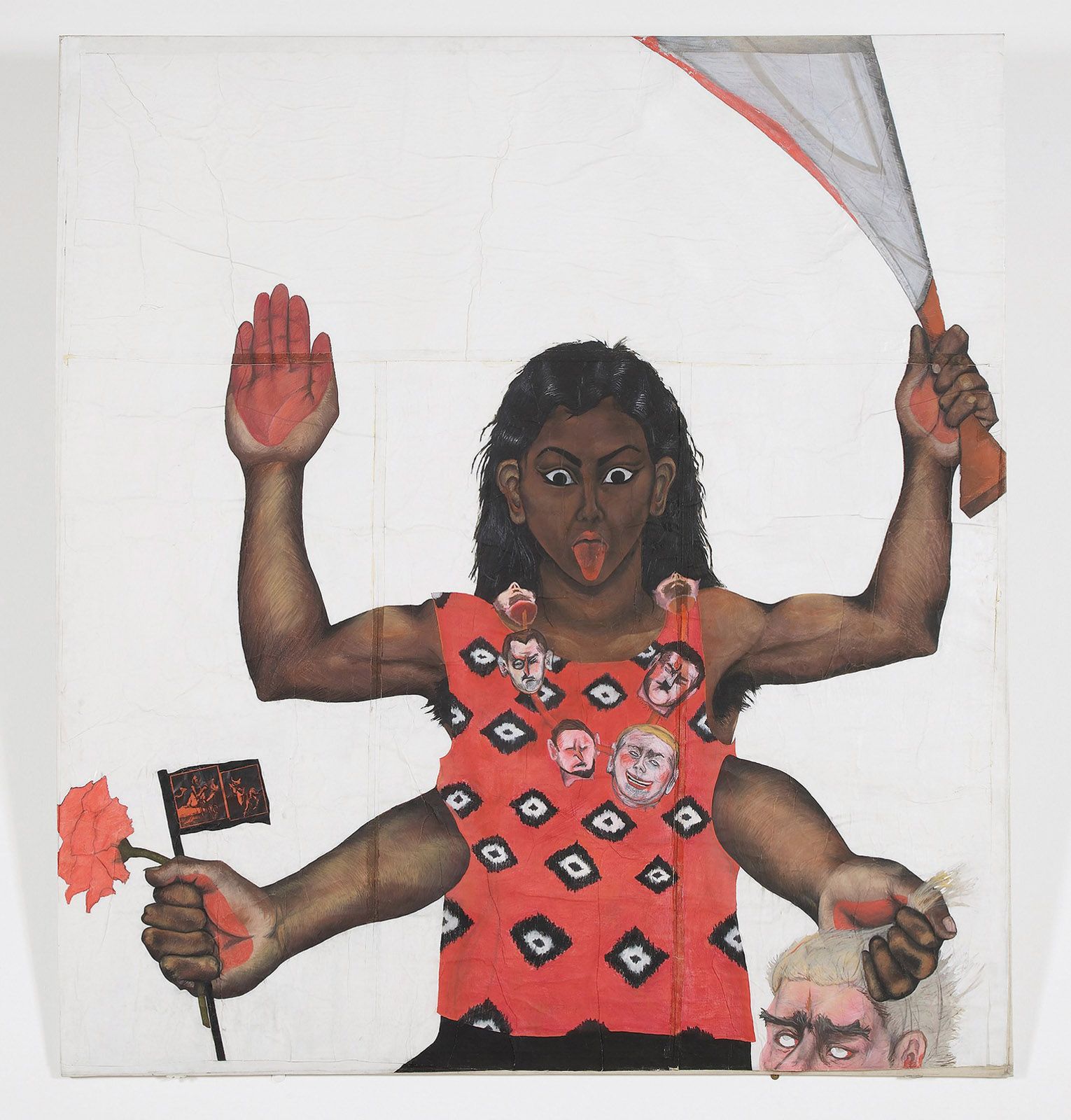 And if we scratch further, much of the UK’s current political crisis stems from its inability to articulate a coherent national identity post-empire.

Yes, I think Britain is in a really terrible space right now. It has used racism to fuel its political intentions and objectives for so long—while also disenfranchising large parts of the working class—that it can’t see any alternative. That’s how you arrive at a mess like Brexit, prompted through xenophobia to serve the wealthiest. You only need to look at this media outpouring [surrounding the death of] Prince Philip, to see how the ruling elite are so invested in sustaining the status quo, irrespective of how badly economic policy decisions at government level impact on the lives of regular people. But it’s equally reassuring to see the Black Lives Matter movement and struggles around women’s equality finally tackle conversations that were started some 60 or 70 years ago by the Civil Rights movement.

"My work fucks with you, and people tend to not like brown women fucking with them." Sutapa Biswas, artist

You were part of the Black British Arts movement, which had a huge impact on the push to decolonise British art. Some of its other members have in the past decade achieved mainstream success. Do you feel your work has been overlooked?

In a 1997 essay published by Gilane Tawadros in the art journal Third Text, myself, Sonia Boyce and Lubaina Himid are cited as three stand-out female artists from that movement. I wonder why I am the only one yet to be properly recognised for my work. I think the erasure of my work and visibility from a 2017 Arts Council England-backed Black Arts and Modernism project as well as an archive by its lead researchers—some of whom I’ve known and exhibited with since 1985—did me a huge disservice. I also think, to an extent, including South Asians in that BAM narrative, who were key to the dialogue that was part of the Black British Arts movement, would have presented an opportunity to enrich the discourse and the archive itself. To exclude many of the artists from that well-funded research was a disservice to many artists of colour across the spectrum who are relevant figures within the Black British Arts movement.

Regarding the term “Black”, it’s important to remember that in the 1960s and 1970s up to the early 1980s, when completing official forms, there weren’t as many distinctions around ethnicity. Such questionnaires asked: (a) “Are you white?” or (b) “Are you Black?”

Perhaps the dominance of certain players in the UK art scene in the 2000s, like Charles Saatchi, brought a real winner-takes-all sensibility into the ecosystem that made heroes of a few and sidelined many. The British are experts at divide-and-rule after all. I hope the visibility of these shows asserts how central I was to that movement. You have been vocal about the need to decolonise the art curriculum, but your work still refers to Western male artists like George Stubbs and Robert Rauschenberg.

What I’m interested in most are critical readings of their work. In the case of Stubbs and Rauschenberg there are specific works that my own practice as an artist engages with formally and aesthetically by way of decolonising the histories out of which those particular historical artworks to which I refer were produced. In my painting Housewives with Steak Knives (1984-85), the background is a direct reference to works from Rauschenberg’s White Painting series and offers this as a formal metaphor of the “white” institutional space. It corresponds to critical readings of these works by Rauschenberg when they were first publicly exhibited, which highlighted their spatiotemporal nature. These nuanced readings presented a way for me to connect with this concept of spatiotemporality to critique Modernism and the art world in the Global North’s monopoly on this front.

But I also incorporate actual references to Artemisia Gentileschi’s works that are collaged onto my painting. The photocopy of Gentileschi’s work is drawn from a book by Rozika Parker and Griselda Pollock titled Old Mistresses that is critical of the absence of women artists from the canon of art history, but meanwhile overlooks the Eurocentric nature of its own model.

Your work reflects upon being Indian, but also belonging to India’s diaspora. In Kali, when you speak in Bengali, there is a sense of artifice to your speech. How do you conceive of your relationship with India?

I have a very dichotomous relationship to India. I am Indian of course, but I sometimes wonder if India is uncomfortable with me. My parents never wanted to leave India, but political persecution made it impossible for them to flourish there. And often Indians in India don’t want to acknowledge that this is part of their history. And neither do they like to acknowledge that the Indian diaspora exists. Some people were forced to become migrant workers because there was very little opportunity for them to sustain any sense of life in India. And this complicates the economic and political circumstances of India itself, where the class system is incredibly divided. After all, the British Empire could never have happened without the collusion of our fellow Indians. 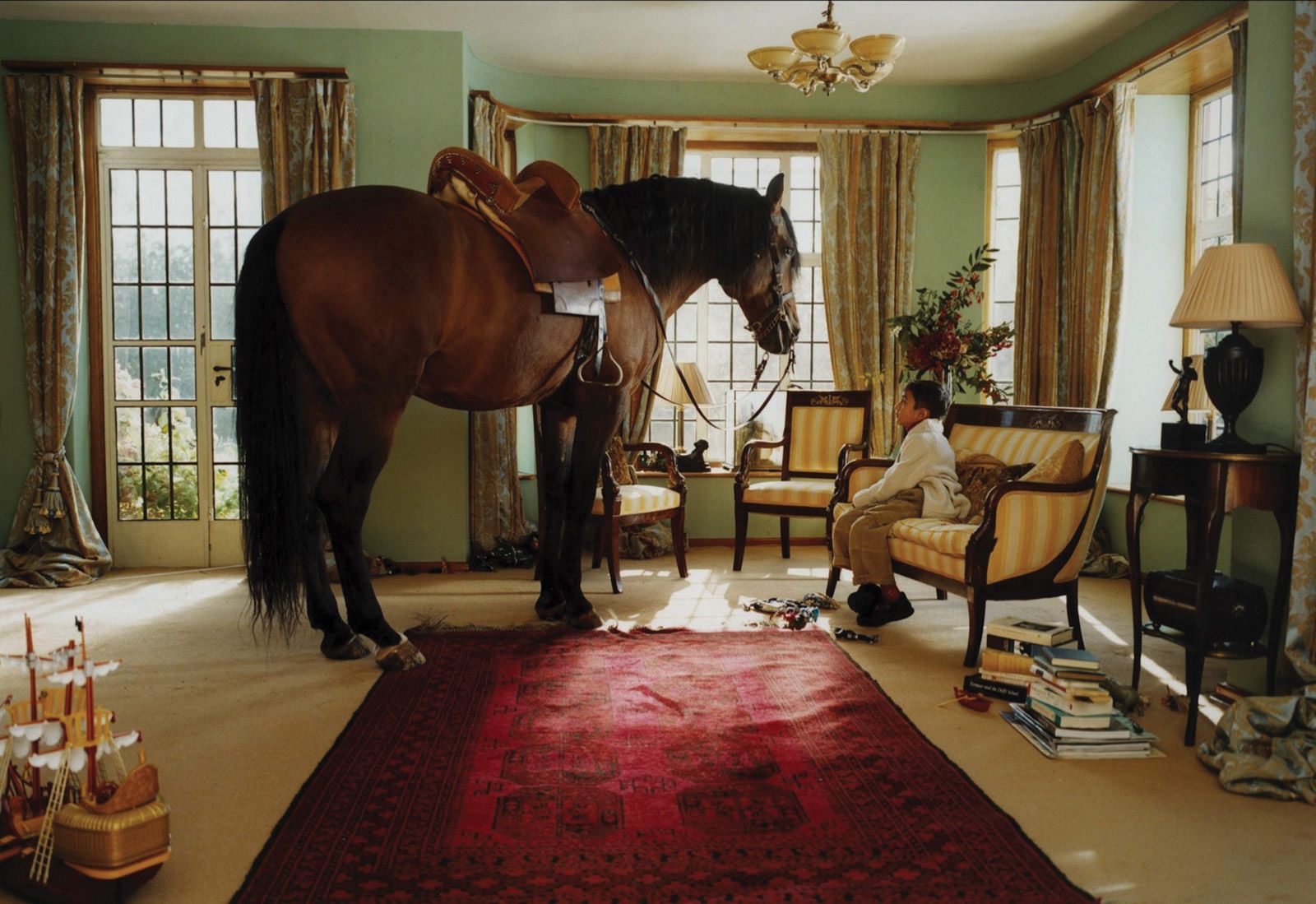 A still from Biswas’s 2004 film Birdsong, which includes surreal juxtapositions, such as a horse in a peaceful, middle-class home © Sutapa Biswas; DACS 2020.

From your earliest works, you have wanted to unsettle our sense of time.

There is a tendency within Western culture to represent images and definitions of “othered subjects” that fall outside of normative dominant Eurocentric and North American culture as fixed entities, or entities “frozen” in time, never-endingly recurrent as racist, sexist stereotypes. I want to disrupt these fixities and allow the viewer to engage with the subject on a deeper level, through a feminist decolonial lens.

The concept of time within aspects of Indian cultures is very bound together with the idea of life cycles, for example in the concept of reincarnation as we find in Hinduism or Buddhism. The concept of zero and infinity is also widely accepted as being born in India. There is a beautiful poetry in this for me, as I consider the idea of infinity in relation to the diasporic experience—in particular, the way in which that experience situates us in time and space, but also beyond this into another projected space. In much of my film work I like to heighten the sense of things being slowed down viscerally so you’re never fully sure if something is beginning or ending.

Disruption seems to bind your otherwise aesthetically diffuse body of work together. You like to disrupt the eye and our expectation at every turn.

Yes, I think my work fucks with you, which is maybe why some people find me difficult to digest. People tend to not like brown women fucking with them. By placing brown bodies in places they shouldn’t be and subverting traditional narratives I am trying to saturate spaces with the possibility of imagination. I am fascinated by the mind of my son when he was a child, when he saw no division between the real and the imagined space in terms of what’s possible. That sense of wonder is ultimately an invitation for you to reconsider the past, so that you can imagine a different future.